If the deployment of the lighting/video/effects systems at the Eurovision Song Contest 2021 can be described as overwhelming to say the least, just as impressive was the sound system in Rotterdam’s Ahoy Arena. All equipment for live sound and wireless systems was provided by Ampco Flashlight and NEP/United, both Dutch companies with an excellent reputation for large-scale international events. Heads of Sounds Jeroen ten Brinke (Show) and Thijs Peters (Broadcast), both have extensive international experience in the field of sound design, and selected a team of highly skilled professionals for this event, each of them with enormous know-how in dealing with similar events around the world. For the hanging of the ESC 2021 audio systems, 514 Lodestar chain hoists and 74 BroadWeigh load cells were specified, of which 50 hoists for audio only: 36 hoists for lifting the 6 main clusters and 7 hoists for the 14 cluster infill. 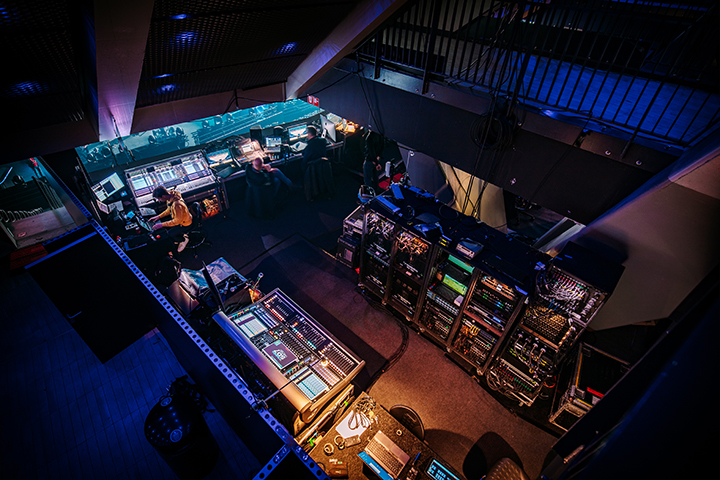 To ensure the perfect running of the two semifinals (18 and 20 May) and the final show on Saturday 22 May, all the artists had the opportunity to try the in-ear systems, in a dedicated rehearsal room where they could adjust the sound of their own in-ear monitoring. The equipment in the Soundcheck room was a clone of the equipment used inside the Arena, all organized to find the perfect balance of the IEM mix and to provide optimal performance. All settings made in the Soundcheck room were then sent to the mixing consoles within the venue. Obviously in the arena due to the large format PA, the acoustics couldn’t be the same. Therefore the confrontation between the artists and the audio team during the rehearsals was extremely useful. 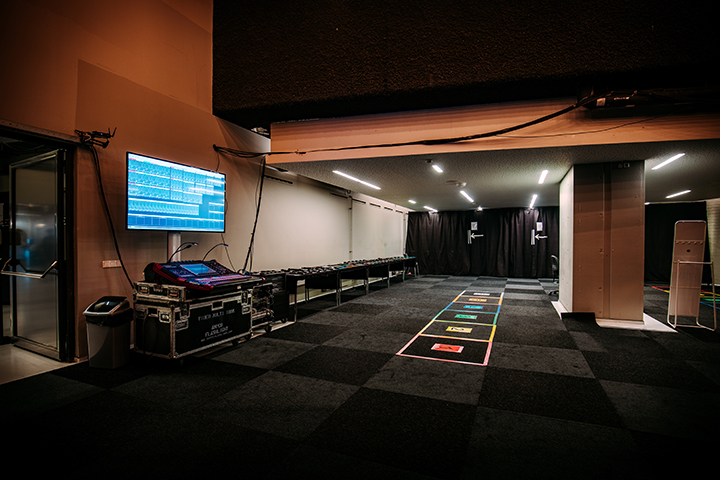 Aart Heus, RF Engineer of the event explains: “When asked to think of a system for the ESC where redundancy was one of the main tasks, we immediately came to Shure Axient Digital. We configured this system to provide candidates, speakers and artists hosts a handheld transmitter which transmits permanently on 2 frequencies at the same time. This way you have the reserve frequency under control. Since these hand transmitters work together with the show link and spectrum scanner, the system is able to replace the frequency disturbed with a new one, all this in 50 ms. All other belt packs and transmitters are also remotely controllable and are capable of receiving spare frequencies in 50 milli seconds.
What further distinguishes this set at Ahoy Arena is ESC’s request to use hand and ear transmitters not only in the arena, but also in dressing room corridors and production offices. Artists wear in-ears from behind the scenes, making range on earphones essential. “

On the frequency management Aart Heus says: “Together with Andre Rotgans and the telecommunications agency, we constantly watch what is happening on air. We have divided the work areas. Andre is responsible for all the coordination of frequencies around the wireless cameras and walkie-talkies. And I provide all of the handheld transmitters and earphones. This means the number of coordinated frequencies currently just for me is 280. We run the whole system with the Shure SB900, SB910, SB920 battery system, this gives us an accurate view on the duration accurate to the minute. Plus, this is obviously super environmentally friendly. “ 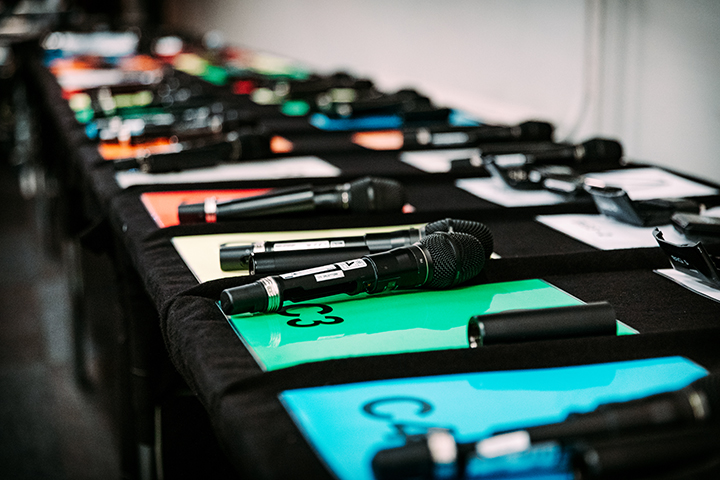 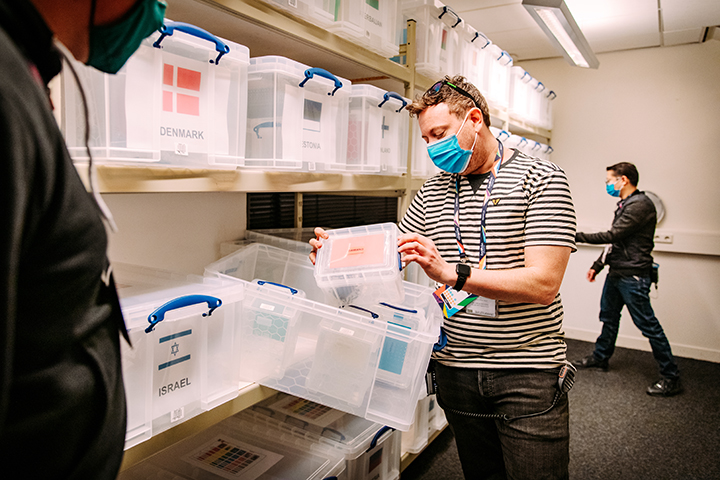 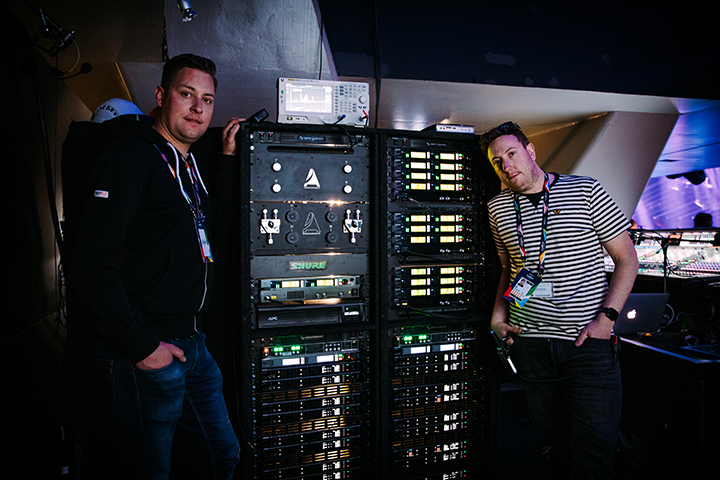 Asked how the sanitization of microphones and in-ears was handled, Aart Heus replies: “COVID measurements also affect our audio department. To nip any contamination in the bud, we have a COVID19 area within the audio team. Each singer has its own microphone grill. This is screwed onto the microphone just before it’s his turn. This is not possible with in-ears, so they are used for personal use only. Each artist has a personal plastic box in which this grill is stored. The personal plastic boxes of all the delegations are then stored together on shelfs in a production office, which we call the “library”.”

Particular attention was paid to the design of the system for all the playback tracks, where three independent Mac mini computers constantly worked in sync, each with redundant outputs via RME MadifacexT and Directout Madi switcher, always available for all audio systems. In case of  failure, all switches were automated for an imperceptible change, with the possibility of a manual override. The slogan chosen by Rotterdam’s mayor, Ahmed Aboutaleb, “Be open, be positive”, was taken to heart by the Dutch host broadcasters NPO, NOS, AVROTROS as well as the Netherlands-based OB companies NEP and United (EMG), which again joined forces to cover the event.
To ensure pristine sound quality and reliability, NEP equipped its UHD1 and UHD2 twin OB trucks with 64-fader Lawo mc²56 consoles, Nova routing cores and Lawo’s VSM broadcast control system for intuitive and smooth control of the broadcast chain. The two OB trucks are set up in a Main/Backup configuration for seamless protection switching. Two additional 48-fader Lawo MC2-56 MK3 consoles, along with monitoring equipment and outboard gear provided by Lawo Rental, were stationed in a separate Music Room where music producer Tijmen Zinkhaan mixed all delegation and interval acts. While all broadcast audio connections are streamed via RAVENNA/AES67, the audio signals for the PA at the Ahoy venue are provided by Dante cards inside the Nova routing cores.

The artists were also provided with a “Viewing Room” with a 5.1 listening system from D&B where they could listen and judge the work of the audio team. During rehearsals, the coordination staff, Maarten Mees on stage and Peter Kolsters in the viewing room, were on hand to convey all the artists’ requests to the sound department.

Riedel Solutions and Services for ESC2021

For the eighth year in a row Riedel has dealt with everything that has to do with the communications sector and beyond. We asked Yung Min Lee, Senior Project Manager of Riedel Communications to give us some explanations on this:

First of all: we are responsible for communication, for all kind of communication at the ESC2021. That means we are responsible for wireless comunnication, we have an analog system and a digital system in place, around 550 radios in use, about 100 wireless intercom beltpacks in use, and about 200 wired intercom panels all around the venue. Another part where Riedel is responsible for is signal distribution, that means all the audio signals, video signals, distributed in all areas, all the signal transport is going through our system. Another part is accreditation, the badge printing and the turnstalls you see, we are also responsible for that. Last but not least we care about all the IT system. That everybody gets a secure internet line, wireless internet, wifi access point etc. “We deliver the main backbone for everything, signal distribution or the commentary systems, so we make also sure that we connect all the different countries from the commentator booth, so that they can commentate on site, it’s going through our Mediornet System and also on our Artist system. We have a lot of monitoring tools, our system is redundent in itself, from power suplies to CPUs, and yeah…I would say we have a quite fail over system, a good monitoring system, and engineers on site to see the problems before they are coming. We are the first one to come and the last one to go. We came before the load in, because you need accreditation on site, and before other suppliers come in they need a radio sysstem to communicate on the venue, and the last thing they give back is the radio. We arrived on 7th of April and we are leaving on 27th of May, so around seven weeks. Let’s say we are a kind of a nerve system of these kind of events, but that’s what we are known for. Nobody realizes that we are on site, because hopefully everything works well, but if there’s a problem they can come back to us. With the experience of eight years we can say thet the show day is the easiest part, because everyone has to become famliar with the intercom panels, learn how and who they have to talk with, so the guys of our team are constantly programming and pushing buttons, so that on the show day everyone can be relaxed and do the show.”