Thirty-eight Robe MegaPointe moving lights were an integral part of the lighting rig used by LD Chris Kempton for the UK’s 2021 Comic Relief biennial Red Nose Day telethon event which harnessed the power and inspiration of humour to raise funds for good causes. 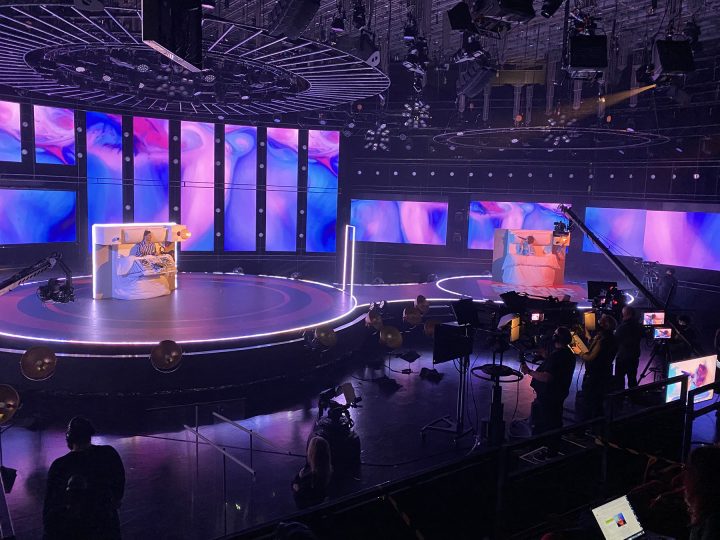 Staged in March at D Studio in the BBC Elstree complex in Hertfordshire, UK, and broadcast live on the BBC, never has it been a more important time to raise smiles and sprits!

The telethon was hosted by Sir Lenny Henry alongside Davina McCall, Paddy McGuinness, David Tennant and Alesha Dixon. It was the first Red Nose Day event to have a virtual audience – onscreen behind the presenters – due to Covid restrictions.

Lighting equipment was supplied by JLLighting Ltd., together with power distribution infrastructure and media servers to run all the playback visuals.

Chris has lit the show several times in the last few years, and this year he took Patrick Doherty’s dynamic set design – a spectacular spherical central stage flanked by two spherical podiums, surrounded by multiple LED screens on three sides plus circular trussing and ceiling elements above – as a starting point.

Along with this slick contemporary look, Chris considered the super-quick live changeovers facilitated during this fast-paced style of broadcast, and the need to be able to flip seamlessly between a variety of performance styles.

“It’s vital that the visual departments are fully aligned and enjoy a good synergy, so everything works beautifully together” he enthused.

MegaPointes were the main effects fixtures of the show.

They were chosen for their multiple feature sets and excellent colour mixing capabilities, and for their general versatility, an attribute essential for lighting action-packed multi-genre shows with a mix of live and pre-records plus an array of special guests and unique collaborations.

“Music wise, It could be anything from a big West End style production number one moment to a delicate ballad the next to full on techno the next” explained Chris.

Fundamental to achieving the range of looks was having a moving light that was an equally good beam, spot, and wash fixture and the MegaPointe met these criteria.

The fixtures were dotted across the over-stage trusses, with some on the floor, and were part of approximately 300 other lights.
Chris frequently uses Robe products in his work. He thinks Robe is an innovative manufacturer and “reliability” is another key issue for him, and something that he values in Robe.

Reliability is equally important to JLLighting, which has invested in the brand steadily over the last two years.
The additional challenges of this show also included a very tight rehearsal schedule and no off-site pre-viz time.

Two very experienced lighting programmers – Darren Lovell taking care of the generics and white lights on a Compulite Vector console and Tom Young operating moving lights on a grandMA3 console – were a vital part of the equation. They too enjoy a great ‘shorthand’ communication which enabled them to work fast, accurately, and creatively, maximising the programming time.

Jack Linaker took on the role of video content wrangling, utilising another grandMA3 console to run the Green Hippo servers and output text, graphics, VT play-ins, etc., – some of which had to be formatted and output to screen almost immediately – as the show was being broadcast.

Chris summed up, “Comic Relief is a very challenging show to light, a long live transmission with little rehearsal time, but it’s always good to be surrounded by a great team who can be relied upon to deliver the best results, the adrenaline certainly runs fast! At the end of the day, this is not just entertainment but about highlighting these very worthy causes.”

JLL’s MD Jack Linaker stated, “The service level from Robe UK is second to none, providing great fixtures that our clients love, so we are already looking forward to our next investment with Robe!”

Gaffer Dan Terzino from JLL worked closely with James Churches from the studio side, and the telethon was directed by John L Spencer.

Despite the pandemic, Red Nose Day 2021 raised a staggering £52 million for Comic Relief and the incredible organisations who are working with communities, vulnerable people, children and young people, homeless people, those forced to flee their homes, those at risk of domestic abuse and people suffering from mental health issues and those hardest hit by the coronavirus crisis.