The town of Clinton, NY is the home of Hamilton College. Precision Audio Services has provided audio engineering services to the college’s Music and Theater Department for several years, and this spring the company heads up a sound system upgrade in Wellin Hall. The 700-seat hall has served as the central hub of music education and concerts for the college since its construction in the 1980s. The bare concrete and polished wood walls combined with flown wooden acoustic panels above the audience creates a highly reverberant environment—perfect for the hall’s original purpose of unamplified acoustic performances. 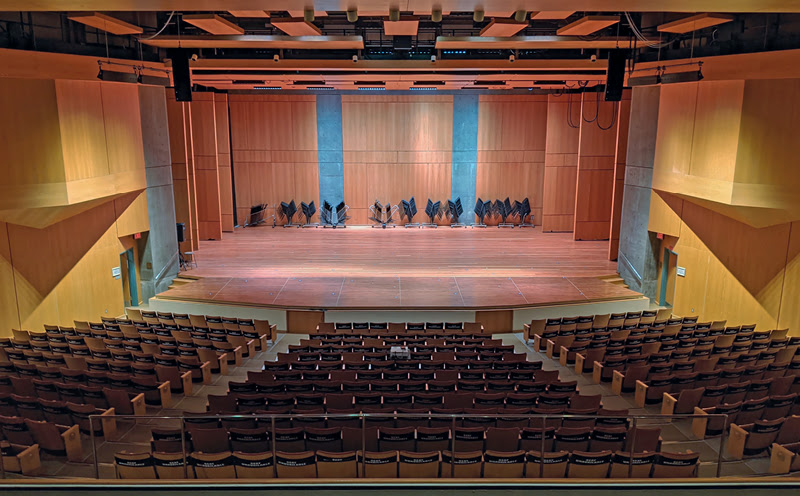 However, these properties that make the environment desirable for acoustic performances, also make sound-reinforced events a significant challenge. “With an RT60 of almost 2.5 seconds, achieving a clear mix and vocal delivery is typically a major source of frustration for visiting mix engineers,” says Michael Lawrence from Precision Audio Services. “Although to a large extent, this is simply the reality of working in such an environment, one of the goals for the new design was to increase the consistency over the space and minimize excess energy splashing onto the walls and other non-audience surfaces, both areas where the current installed system struggled.”

Another design challenge was presented by the way the space is used – or, more accurately, ways. The hall hosts a wide variety of musical, theatrical, dramatic, and speech events that necessitate a large degree of flexibility, where the current system presented some limitations. “We have three different mix positions depending on the needs of the show,” explains the venue’s Technical Coordinator, Bill Di Paolo. “Sometimes we are driving press feeds, live stream feeds, backstage zones, and we need a way to pull those feeds off the console without the operator having to jump through hoops. Another thing that’s been a bit of a problem for us is that the current mains are dead hung, so there’s no way to get to them for maintenance if there’s an issue. We had to swap out a bad box last year and it turned into a whole labor call just to get the box down to the deck to be worked on.”

The system design is far from the traditional install-patch approach. “Sometimes I have to adapt to things very quickly, on the fly, and in the past that’s been a challenge where we couldn’t get physical access to a loudspeaker, or all the signal flow was happening in the back of a rack somewhere with no easy way to get signals in or out of the rig at various points in the chain,” Di Paolo notes. “For larger events, we typically have a dedicated sound engineer but often it’s just me trying to handle multiple things at once, or we have a student operator, and so we need to be able to get to things easily.”

Starting from the console outputs, the new system design approach allows quick and easy changes before or after the processor, all the way to the loudspeaker positions themselves. No punch-down connectors in the back of racks – all the system patch points were brought to the front of the drive rack in a custom XLR patch bay system from Elite Core Audio, resembling more of a touring rack design mentality. I knew of several DSPs that would have been an appropriate fit for this project, but settled on an Allen & Heath AHM-64, which I felt offered the “best of both worlds” between a typical install-type free-wire DSP and a more live-oriented fixed-structure DSP.

An A&H IP6 controller sits next to the mixing console, configured for quick access to mute/unmute the entire PA plus dedicated mute and level controls for the ADA assistive listening system, the backstage 70-volt system, and the press send. These feeds are derived from the console mix and accessible via the patch bay, so providing a press send is as simple as plugging in a cable and turning a knob to adjust for the mic or line level requirement of the press equipment.

The main PA hangs presented some issues as well – the existing hang point locations didn’t allow for the hangs to be lowered for maintenance due to the proximity of the loudspeakers to the hall’s architectural elements and lighting fixtures. “We decided to move the hang points onstage about 18 inches, which would further the clearance away from the side walls to allow the arrays to be freely raised and lowered. It required the creation of new points via custom-length bridles between existing steel. This enabled the system to be lowered for maintenance or simply have the trim height adjusted for various events. The standard trim height was chosen to be the best compromise of sightlines and coverage, while the chain falls gave the option to lower and re-splay the arrays for theatrical events in this space – something not achievable in the past.” Lawrence explains.

“We knew we needed a main array product that would be powerful enough for the space but also lightweight and compact enough to allay sightline considerations. After reviewing the project requirements with Tarik Solangi, National Sales Manager at RCF USA, we settled on seven elements per side of the RCF HDL 6-A, a “small but mighty” line array that I’ve used in the past and been quite impressed with.” Lawrence states.
In addition to the main left and right hangs, a single HDL 36-AS subwoofer was chosen to fly in the existing center hang location above the proscenium, providing LF extension for the main arrays. Typically, the sub is tasked with music playback and light reinforcement, so the HDL 36-AS gave more than enough power in a small and flyable package. Ground-based subwoofers are deployed for the occasional event that requires more extensive LF reinforcement.

The geometry of the orchestra pit meant that splaying the main PA to cover all the way down to the front row would also cover much of the apron with high-frequency energy, an untenable situation given the frequency of events employing large numbers of omnidirectional lavalier microphones. So, instead, the main hangs now cover down to about the fifth row, which kept more energy off the stage. Since the venue geometry and logistics prevented permanently installed front fills, the remaining front rows are covered via a pair of RCF TT 08-A II loudspeakers flown from a batten pipe above the edge of the apron. A further pair of TT-08-A II’s would serve as delays for the upper corners of the seating area, where the direct sound from the arrays is impeded by the wall geometry. Combined, this system would be able to cover all the fringes of the seating that were left out by the current installed system.

The installation process began on a Friday afternoon once the hall was available and it was quick and productive. Lawrence continues “My team (Nate Clark, David Williams and Ryan Goodwin) and I were able to get the system up and running by Saturday evening, which left Sunday for tuning, tweaking, critical listening, and training. Aside from some low shelving on the mains for ‘array compensation’, ”the system needed virtually no EQ to achieve our target response, and once the timings were set, we were good to go.”

One final “out of the box” aspect was left – dealing with the different requirements for front-to-back level variance. “Since most of the events in that space are spoken word, reducing level variance as much as possible is the best approach for everyday operation.” Explains Lawrence, “However, when the space is hosting live music or musical theater, the system needs more output towards the front to allow the vocals to keep up with the stage volume and/ or the orchestra seated in the pit. To address this issue, I programmed a series of presets in the AHM-64 that would only recall the second EQ block on system zones, providing more granular control over the all-important upper midrange energy throughout the venue along with easy reconfiguration via a push-and-turn encoder on the IP6 at the mix position. Without a doubt, the hall will remain a challenging environment for reinforced events, but the consistency in both level and tone is greatly improved over the old design, and I’m much looking forward to attending events in the hall in the upcoming months.”