The impressive, airy Kulturhuset Spira (Culture House Spira) is a seven-story glass-and-wood structure on the banks of Lake Munksjön. Leading Swedish architect firm, Wingårdh, designed the structure that houses four stages and hosts a progressive programme of music, theatre, dance, and children’s programming, as well as serving as the headquarters for the regional Smålands Music & Theatre team. Spira translates as ‘grow’ or ‘aspire’ and this spirit infuses the team at Spira’s desire to remain at the cutting edge of technology. When they recently embarked on an upgrade to the venue audio system, they opted for L-Acoustics Kara II. 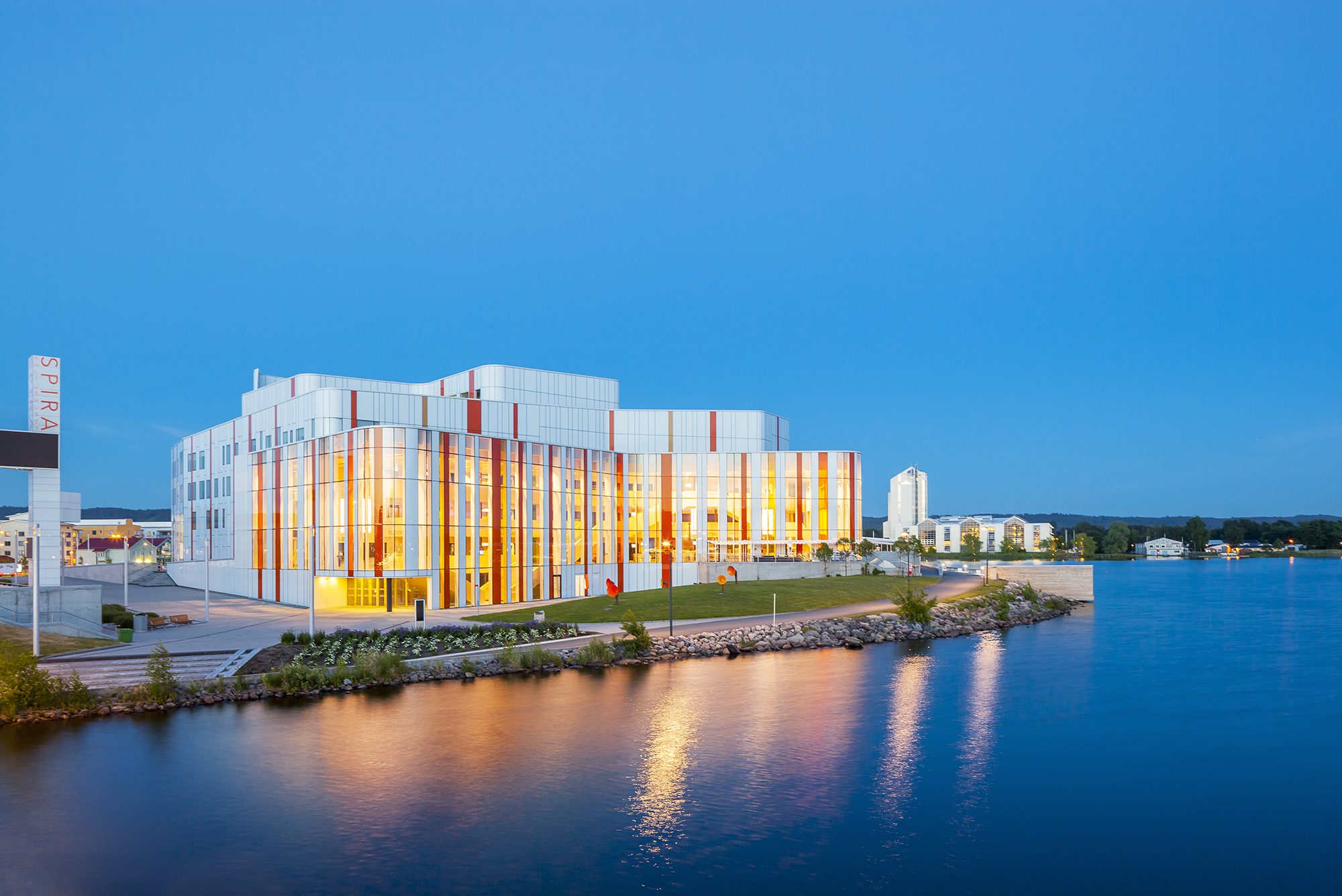 L-Acoustics was the first and final choice of sound system for Spira. When the centre opened its doors to audiences in 2011, it was with a Kara system and it has served well in the intervening years. However, demand for a larger and more powerful system increased over the years and, with L-Acoustics releasing its Kara II, local integrator JLE Audio AB was able to offer a cost-effective solution to upgrade to the venue’s existing Kara to Kara II and supplementing it with additional new Kara II enclosures.

“The Jönköping’s Sinfonietta performs several concerts a year here,’ says Spira Head of Sound, Jack Strandberg. “The classical musicians, guest conductors and sound technicians that work here all demand good sound. That’s why we chose the L-Acoustics brand with its ‘hi-fi’ sound, clarity and homogenous response to give the absolute best audio experience for our orchestra guest shows, conferences and for the audience.

“When we decided to upgrade, Kara II was a great option, particularly as the new Panflex ‘fins’ can eliminate early reflections. When we found out that we could upgrade our existing Kara, it made the choice even easier.”

Work began in late autumn last year and was completed in January. With support from the application engineers at L-Acoustics, and working closely with the team at Spira, JLE designed the new Kara II system, with the goal of ensuring even, quality coverage for every seat in the auditorium. 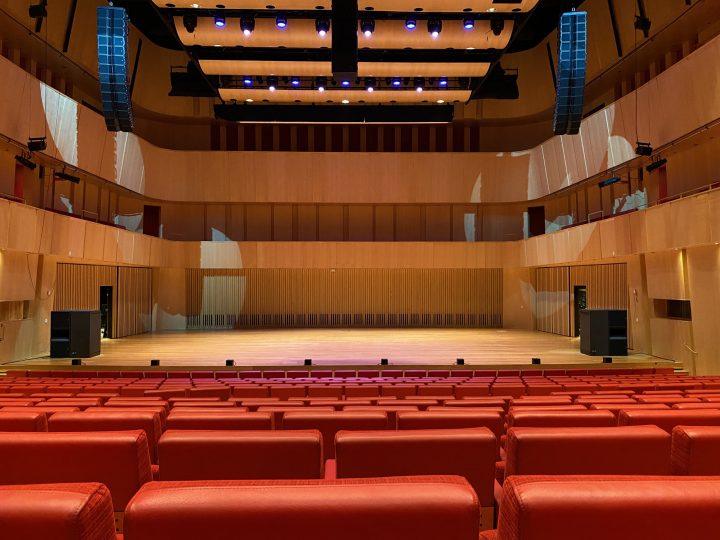 “L-Acoustics products and their system design are outstanding, offering high-end technology and sound quality of the highest level,” says JLE’s Johannes Jonsson. “We knew the system would satisfy both in-house sound engineers and guest productions. L-Acoustics Soundvision was used to create the whole setup. It’s very helpful to have such great software to get a clear picture of the results we can expect.”

Strandberg notes that having a long-standing relationship with JLE and L-Acoustics meant the collaborative process throughout the project worked extremely well. “I emailed L-Acoustics CAD files of our concert hall and got back a detailed Soundvision file for the venue,” he says. “The direction from me was to have the KS28 floor subwoofers in cardioid, together with our original SB18 centre subwoofers, also in cardioid mode, and to have an even spread from the Kara II and subwoofers throughout the entire auditorium.”

The final setup comprises main hangs of 14 Kara II per side with four flown SB18 in the centre, plus a further four ground stacked KS28, two each stage left and right. Eight 5XT are positioned evenly across the stage lip to provide frontfill, whilst four 8XT are used for balcony fills. The system is driven by nine LA4X and one LA12X amplified controller with a P1 processor managing audio distribution over AVB to all amplifiers. 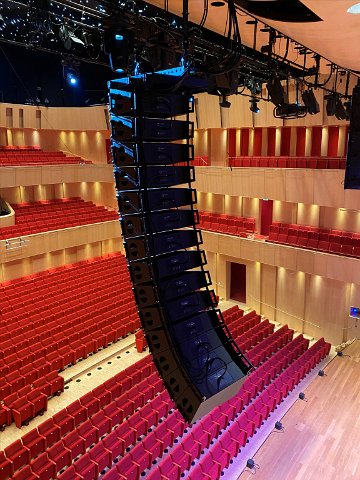 All amplified controllers were positioned on a grid on the top floor of the building, and the team wanted cable runs to the Kara II to be as short as possible, so the installation process started with cabling. The second task was to find the best points for the four Chainmaster hoists that would lift the left and right Kara II hangs into position. “From there the rest of the installation was pretty straight forward,” reveals Strandberg. “The final job was to spend two days listening and measuring the first and second balconies and the ground floor with front fills and outfills.”

“The result we got was very close to what we had seen in the software,” adds Jonsson. “The Autosolver tools in Soundvision did a very good job of achieving inter-element angle optimisation, by providing a refined analysis to improve sonic performance. The AutoFIR filter tool then assists with system tuning of the mid and high frequencies, further improving uniformity and flatness of the high frequency response by determining and applying linear-phased FIR filter to zoned groups within the array.”

JLE has also recently upgraded the PA for Spira’s café stage with two hangs of two A10 Focus and one A10 Wide positioned stage left and right, plus a centre hang of three KS21, all powered by two LA4X amplified controllers. 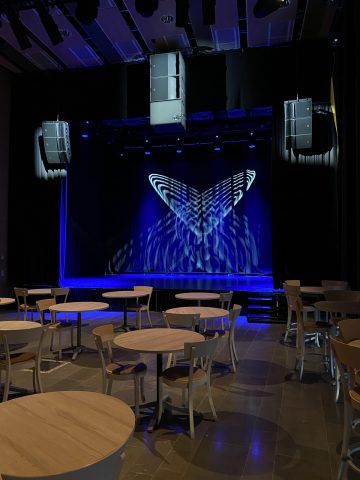 “My main goal was to have even sound across the whole venue,” concludes Strandberg. “Having L-Acoustics in both spaces ensures that wherever our audience is, they are assured a great sound experience and we are very happy with the final result. The system also allows us to continue growing our progressive programme and to maintain our legacy of offering cutting edge technology.”