On the list of high-profile sound reinforcement gigs, the inauguration ceremonies of a President of the United States of America rank near the top, with eyes and ears worldwide on the events. For the last dozen inauguration cycles, almost 50 years given the four-year term of U.S. presidents, Baltimore, Maryland-based live sound production company Maryland Sound International (MSI) has provided sound services for various public and private inauguration events, including the past six inaugurals. “Maryland Sound is responsible for providing the sound system for the swearing-in ceremony on the West front of the Capitol,” says Benjamin Krumholz, a mixing, systems and RF engineer, and head of installations and integrations for MSI. “Everything from the microphones that the incoming president talks into down the line to the PA is typically ours, and it’s a large team effort that I am proud to be a small part of.” Given the mission critical nature of the events, MSI brings its decades of experience along with the most reliable gear in its inventory to the task. Since 2017, that inventory has included a backbone of components from Focusrite‘s RedNet range of Dante™-networked audio converters and interfaces. 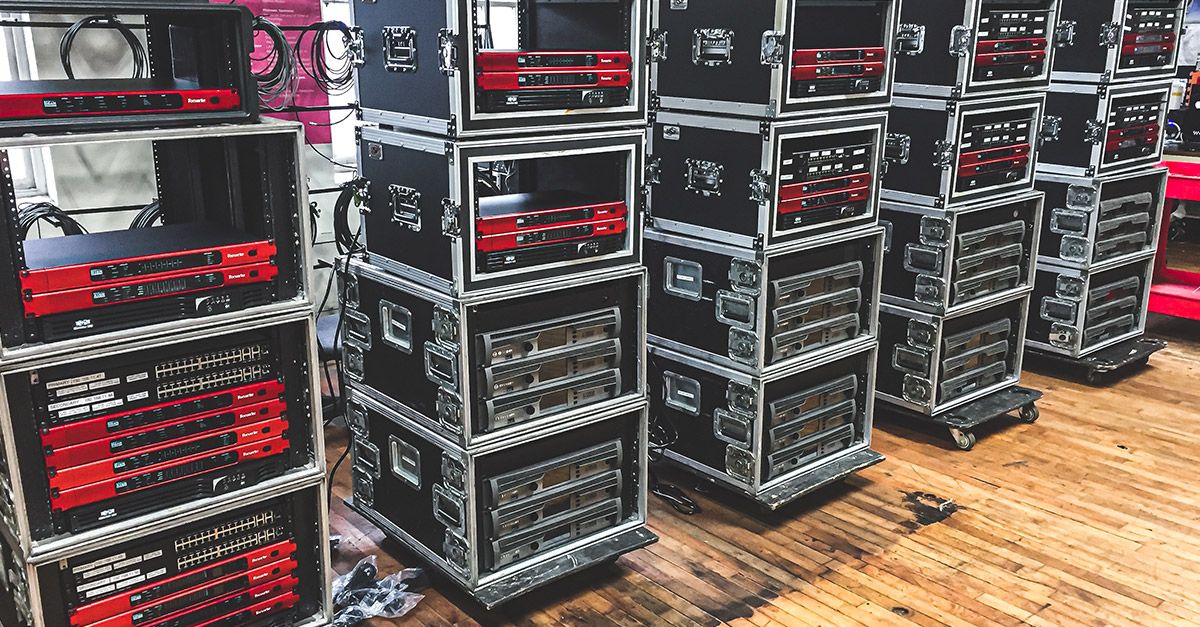 With the sweeping impact of the global pandemic, the 2021 swearing-in ceremonies marked a radical departure from previous inaugurations, shares Krumholz. “In the past, speaker coverage would include tens of thousands of people seated on the West Front of the Capitol and other additional audience areas surrounding the Reflecting Pool and into the National Mall. Typically, we would have multiple work sites in Washington, D.C., taking about 20 to 30 engineers plus support personnel to staff. This year, it was reduced to literally two main speaker arrays, and a lot of infill stuff – we still had the front-of-house, and our crew of eight were also mixing the Marine band and the musical talent. Of course, there were many people supporting the crew and the event.”

“When we bought our first Focusrite systems in late 2017,” says Krumholz, elaborating that the New Year’s Eve ball drop in Times Square – an annual flagship proving ground for MSI – was the first major application, “the idea was for a one-cable solution – data, device control and digital audio all over a single cable, with redundancy. We were used to running data cable for wireless networking, then running more network cable for device control networks, then running more copper cable for analog or AES audio – so many cables. We wanted a system that could be used with any console and any format no matter whether analog or digital. We thought, ‘Why not go to IP?’ With RedNet convertors as their “audio multi-tools” of choice, MSI was able to replace its previously non-networkable fiber-optic solution with one that satisfied every cabling requirement. “For FOH Console interfacing we use the RedNet D64R 64-channel MADI bridge; RedNet A8R, RedNet A16R and RedNet D16R units for analog and AES digital-audio-to-Dante conversion; the RedNet MP8R eight-channel mic pre and A/D converter when we need mic preamp-to-Dante Conversion; and RedNet PCIeR Cards for multitrack recording, interfacing computers with Dante. We have to set up systems that are extremely repeatable, expandable and reliable – efficiency to the max. Time that is wasted cannot be returned or refunded.”

“As for distances between locations,” Krumholz continues, “330 feet doesn’t really cut it anymore for cable length. We need signal distribution systems that are ready to be operated in the IP world and interconnected via fiber optics, as sometimes there are many hundreds or thousands of feet between signal input and output locations. Sometimes we are going up and over streets, attached to trees. Cable is suspended because cable paths are not direct. Fiber-optic cabling has become standard in our infrastructure and has expanded the way we wire and design our sound systems.”

Security and weather can add significant challenges during inauguration events, according to Krumholz. “Access to locations can be blocked or restricted at any time and without notice. Having equipment that is reliable and can be remotely controlled and monitored is a must. The entire show is outdoors and the weather is fairly predictable in January in DC – it’s going to be cold, usually single digit or below. Our equipment has to be able to handle being outside all month.”

Since purchasing the Focusrite systems, Krumholz says, “RedNet gear has been the circulatory system of most of our shows. It is the way we get signals from one place to another. For the inauguration, signal travels from FOH to the main left/right amp rack positions as Dante/RedNet using fiber optic cables. The signal is then converted to AES audio to be fed into the amplifiers. Typically for inaugural events, there would be many delay positions on the inside and outside of the Capitol Grounds. All of those positions are also typically fed Dante/RedNet with fiber-optic runs of anywhere from 500 feet up to 2500 feet away. All rack positions, convertors and amplifiers are on a control network and any position can be accessed, controlled and monitored from FOH or from anywhere else in the chain.”

MSI’s RedNet systems are “infinitely expandable and configurable depending on the inputs and outputs needed,” says Krumholz. “Format is much less of an issue than it has been previously. We can get audio to and from anywhere we have an IP-connected set of switches with no problems. If a visiting engineer wants to give me eight channels of analog or eight channels of 96k AES, it is no problem. If a truck needs to send us MADI and we need to convert back to Dante, it is no problem. We’ve had festivals with three different brand consoles, running on different sample rates all feeding the same set of PA inputs, and there’s no problem. Creating additional output splits for press feeds and other embedders and encoders is just a click away no matter what is connected on the other end. Setup time and planning for major events has been streamlined. Anywhere we have a RedNet Drive Rack we know we can get access to our control network, intercom systems and audio inputs and outputs. If we need more, we can just add another rack and more fiber. We have standard packages that we can take off of the shelf and send out the door with very little pre-configuration necessary.”

The standard MSI Custom Focusrite RedNet Drive Rack is fitted with a RedNet A16R and a D16R (yielding 16 each input and output channels in both analog and AES digital formats along with Dante and control), dual 10-port PoE managed network switches, a UPS backup power supply and custom audio and data I/O panels. All of MSI’s RedNet racks employ Neutrik etherCon and opticalCon connectors. 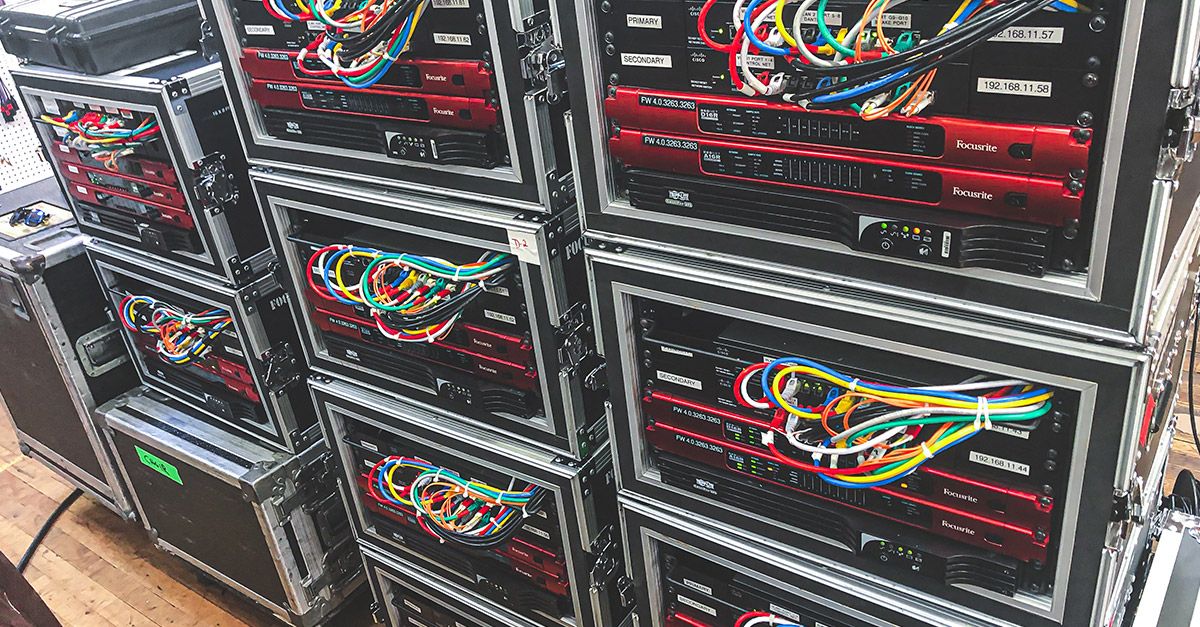 The standard MSI Custom Focusrite RedNet PCIe Recording Computer comes with one RedNet PCIeR Dante interface card. The card is installed inside a customized 4 RU rack mount computer with RAID-configured 2 TB hard disks for recording. This rack also comes with a screen, a mouse and a keyboard in a single waterproof Pelican fly case with a wood slip rack. The computer can run a variety of software platforms including Nuendo Live 2, Waves Tracks Live, Avid Pro Tools and Reaper and can record 128 Channels at 48 kHz sampling or 64 channels at 96 kHz.

When its previous systems were at the end of their life, says Krumholz, replacing an entire infrastructure was a large investment for MSI. “But we probably would have had to invest double to get the same quality and features with other manufacturers.” While the price of copper cable keeps going up because it is so heavy and expensive to manufacture and ship, the price of fiber optic cables keeps falling. Expanding availability of multicore fiber optic cabling yields more data and signals with fewer connections and cables and lighter trunks. “Our wireless microphone and wireless in-ear monitor systems are all driven with one cable,” Krumholz elaborates. “When you are making hundreds and thousands of connections in a month or year, and you can reduce that number by half, it saves a lot of time. We pride ourselves on investing in the best-sounding and highest quality products in a given category. People choose us when their audience matters. We need products that can stand up to whatever we can throw at them. We have not been disappointed with our RedNet investment.”