Tunbridge Wells Baptist Church in Kent, UK, has substantially upgraded its PA with an RCF HDL 26-A ultra-compact active two-way line array. The system was specified and installed by Adlib after the company successfully bid for the full audio-visual contract—including lighting and projection—after the previous system had reached end of life. 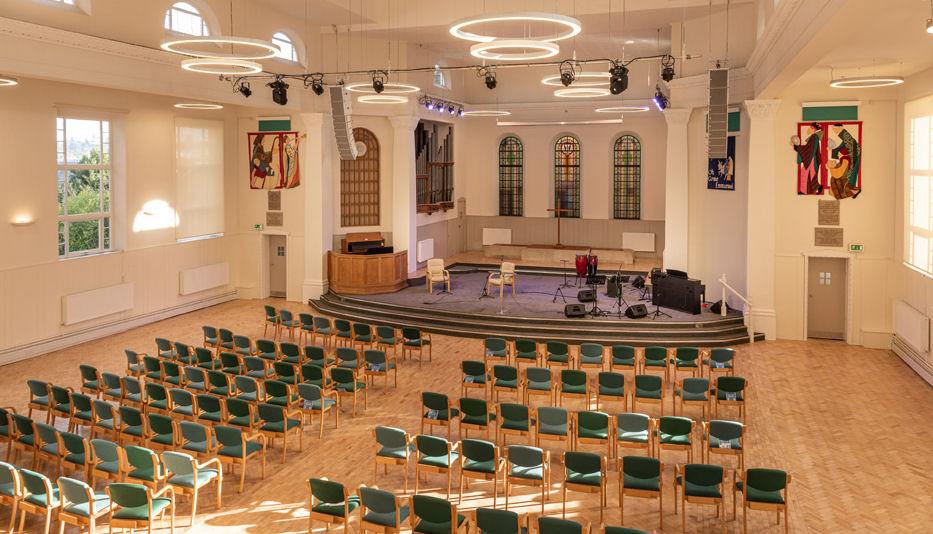 Stated Adlib’s, Tim Robinson, “The process started back in October 2017 and we have been through several iterations along the way.” The quotation they provided not only exceeded the remit for performance but also met the budget, as well as the requirement for a discreet, elegant system, finished in white. After considering various options Robinson was convinced that “the HDL 26-A has provided the church with the best outcome available.” He explained, “The acoustic modelling in EASE Focus showed that we could achieve incredibly even SPL and consistent tonal balance throughout the audience, whilst maximising gain before feedback on stage. The availability of the system in white was key to accommodating a system of this size with the interior design.”

Each of the two hangs comprises seven HDL 26-A elements, integrated with a pair of flyable HDL 35-AS 15” subwoofers. Despite the loudspeakers being self-powered, there were no practical weight constraints. “Even though they’re self-powered, the HDL 26-A system is still lighter than some externally-powered competitors,” he confirmed. “The structural engineer had confirmed that there was plenty of capacity in the roof, thanks to the PA being sited directly under a massive concrete beam, so installation with RCF’s flying hardware was ideal.”

One design criterion was that all LF elements should be flown. “The compatibility between the HDL 35-AS and HDL 26-A made that an easy decision. For practical reasons, it keeps the floor clear and all items out of harm’s way; and for acoustic reasons it maximises the efficiency and coherence of the arrays and meant we would not be murdering the front rows with sub.”

In addition, the provision of six RCF HD 10-A active two-way wedge monitors provides additional flexibility. “Being self-powered, this provides maximum value to the client because they can be used in different configurations in other parts of the church, redeployed as three stereo PAs,” says Robinson, who favours self-powered monitors in multi-use facilities. Finally, a pair of RCF MR 50 have been installed in the foyer, driven from the matrix on the mixer so that it can be run independently.

But, he adds, the RCF system would be nothing without the advanced control of RCF’s proprietary RDNet. “The granularity of control afforded by individual amplification and FIR processing in every box is marvellous and really helps deliver tonal consistency throughout the whole audience area.” RDNet Measure, the 4-input, dual-channel FFT measurement system included in the latest version of RDNet, is a further bonus. Robinson said, “I can see lots of engineers, whether already RCF users or not, installing the free software for that feature alone.”

As for distribution, he says, “The audience area is almost exactly square and so the 100° horizontal coverage and variable vertical coverage [of HDL 26-A] make it ideal.” The new PA will comfortably handle both the house worship band and spoken word. In future it also has the capacity to serve any private hire functions that the Church may wish to entertain.

Summing up, the installer says, “While the HDL 26-A sounds as good as I thought it would be, the HDL 35-AS far exceeded my expectations. I was expecting a total of four 15” to deliver a nice full range system, which would be more than sufficient for a worship band, but hardly trouser-flapping sub. The fact that the HDL 35-AS goes so low and so loud, despite the box being so physically small for a 15”, means there’s some RCF witchcraft in there somewhere!”

Finally, he says, the support received from RCF throughout the process was exemplary. “They were always highly communicative, and all components arrived on time from the factory, despite being in the middle of a pandemic.”

Worship Team Leader, Jack Beattie agreed. “When I first heard the system it blew me away. The consistency and spread of the sound, and the way in which it remains smooth at both low and high volume, is incredible. I can’t recall being inside a venue and noticing the sound being this good. I’ve also been pleasantly surprised by the monitors, which sound balanced—and whether using in-ears or stage monitors I expect the experience to be on par in terms of clarity.”
He also identified other benefits. “Historically the church has been active in town-wide initiatives and has often needed to lug PA systems for different bands to use at different events; but now I can envisage using the monitor system in different, more efficient ways.”

The Church’s audio engineer, Dave Jarvis, added, “The bass in particular was impressive and the system generally was as good or better than I was expecting. I’ll need to do less EQ as I’m not fighting against the system just to get it to sound ‘normal’. The vocals jump out naturally.”

Even the singers remarked that they are able to hear themselves for the first time. “They are finding that the HDL 10-A is in a different league,” Jarvis exclaimed.