Christ’s Church of the Valley (CCV), a non-denominational Christian church located in and around Phoenix, likes to do things in a big way. Founded in 1982, CCV was able to raise over $1 million in a single day back in 1996 to purchase 50 acres in the northwest suburb of Peoria where it would build its main 3,000-seat campus, the first of what are now ten worship locations, and soon to be an even dozen in 2021. 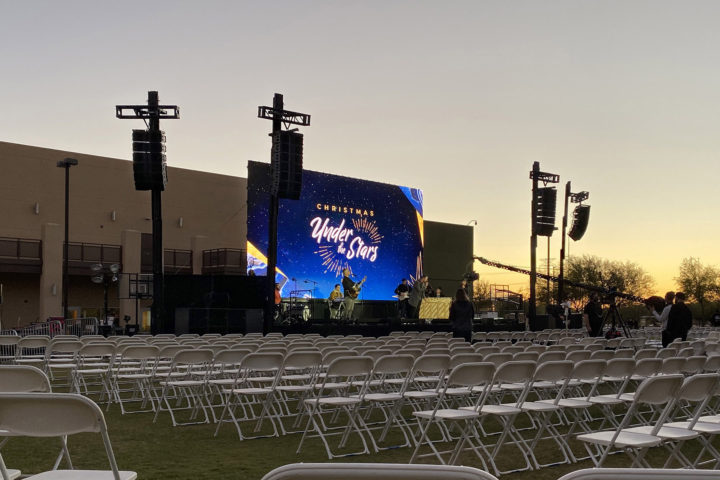 When it came to its annual Christmastime event for 2020, the church wasn’t about to let COVID-19 permanently halt the production. Instead, it produced Christmas Under The Stars outdoors and safely spaced at all of its campuses over six nights during the holiday. Enjoyed by an estimated 50,000 people, each campus had fantastic sound thanks to the deployment of an astounding 210 L-Acoustics loudspeaker enclosures and components provided by the Phoenix office of Clearwing Productions.

“It was pretty incredible,” recalls Clearwing Audio Engineer/Designer Joe Spitzer, who is also a certified and accomplished L-Acoustics K System Engineer (KSE).  “We approached this as we would a music festival with ten separate stages. L-Acoustics had the perfect mix of speakers and technologies to let us design and build PA systems that were exactly matched to each location’s acoustical and coverage needs, as well as make sure we had consistent sound quality across all ten sites. Plus, it was consistent with the sound the church is used to hearing because they have L-Acoustics Kara or Kiva II systems in more than half of their campuses. So the system performance was very familiar to their own engineers.”

The main Peoria campus had the largest single system, consisting of a flown PA using seven Kara boxes per side for the main arrays and six more per hang for the side arrays. Six SB28 subs provided low end, and the whole system was powered by four LA-RAK II amplified controllers, each containing three LA12X amplifiers. 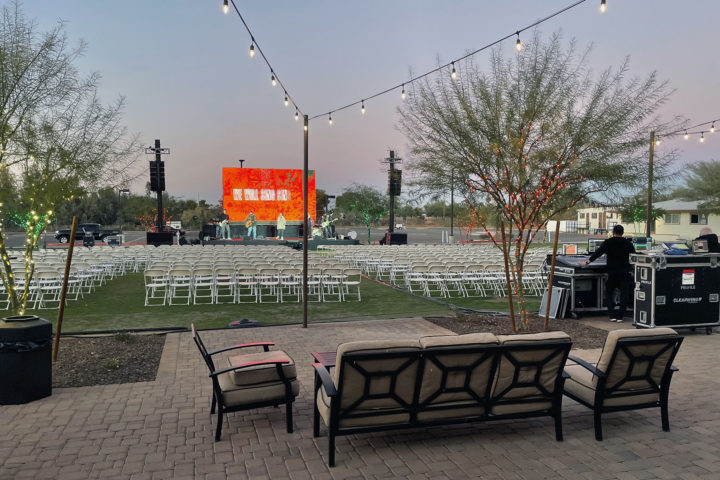 Rehearsing on the Kara/SB28 rig at North Phoenix

The other nine campuses had combinations of six Kara or eight Kiva II speakers per side, most stacked atop a pair of either SB28 or KS28 subs, while two locations had six-Kara hangs flown per side. One location, an auditorium with a wide, fan-shaped seating area, utilized two A15 Wide and two A15 Focus enclosures per side. In all, Clearwing’s technicians deployed a sum of 74 Kara, 48 Kiva II, ten X8, six X15 HiQ, six ARCS II, four A15 Focus, four A15 Wide, eight 12XT, and two Syva, paired with a total of 28 SB28, 16 KS28, and four KS21 subs, plus 25 amplified controller racks.

But there was far more to this sprawling project than speakers and amplifiers—the right digital tools from L-Acoustics and a good logistical plan were also critical. Spitzer explains, “We wanted to achieve the same tonality and low-frequency contours that they get indoors in all of the outdoor locations.” Spitzer supervised his installation crews over five days as they set up systems in each location, then stepped in for the final tunings and calibration. For that, he utilized L-Acoustics Soundvision acoustic prediction software paired with the M1 calibration suite bundled with LA Network Manager on a P1 processor. Together, these platforms created a seamless workflow that began with systems design and extended through tuning and critical listening, providing maximum consistency in system performance across all sites night after night. 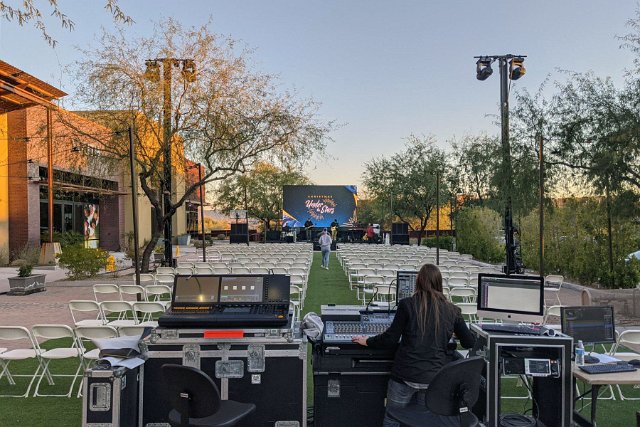 One particular application of the LA Network Manager control and monitoring software that was heavily used for Christmas Under The Stars was the Autoclimate feature, which allows for the simultaneous adjustment of air-compensation filters based on measured temperature and humidity conditions. “The band would do its soundcheck during the day, but by the time the show was to go on, the temperature had dropped, and there was more moisture in the air,” he says. “The change in humidity, in particular, accentuates high frequencies, and Autoclimate allowed us to automatically compensate for changing air conditions, dialing high frequencies back as needed. It is an awesome capability to have for a set of shows like this.”

The church agreed. Production Director Blair Drake was impressed by how consistent the sound quality was between the various outdoor performance locations and how closely it matched what the audience members hear inside the churches.“The Soundvision modeling was extremely accurate—what the software predicted was very true to the end result,” says Drake, who mixed FOH sound at the Peoria campus in addition to overseeing all of the audio crews at the other event locations. “It’s one of the many reasons we’ve been using L-Acoustics for so long.”

He adds that all of CCV’s new locations in the last six years have had Kara and Kiva II PA systems installed, and the pending new locations for 2021, in Phoenix suburbs of Laveen and Queen Creek, will have L-Acoustics A Series sound systems. “Clearwing did a fantastic job on this project, making it work under very challenging conditions,” he says. “But L-Acoustics gave us the right tools to make it all happen.” 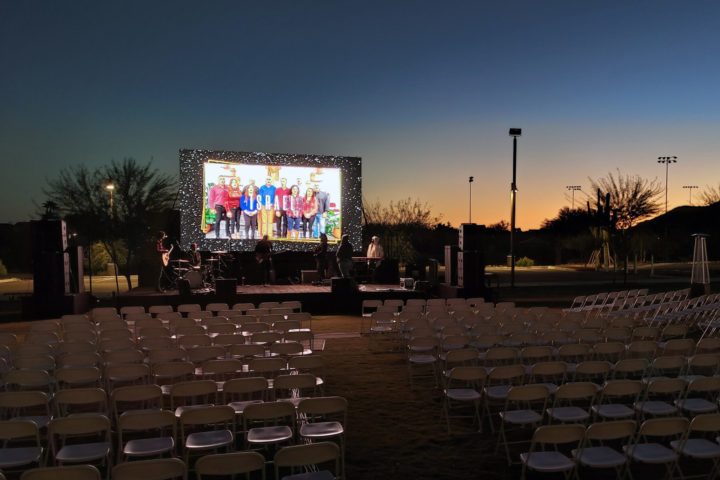 Visit www.ccv.church/christmas for more details on CCV’s Christmas Under The Stars.

Clearwing Productions can be found online at www.clearwing.com.