A moving memorial to firefighters at Firemen’s Memorial Park in Naperville, Illinois, is receiving praise from both the artist community and general public alike as a uniquely elegant work of art. Created by local artist Paul Kuhn in partnership with Dark Moon Designs and Intelligent Lighting Creations, the memorial depicts a firefighter climbing a “Ladder of Light” and was unveiled on the 50th anniversary of a crash that killed three Naperville firefighters. It also memorializes another firefighter from the same department who died of a heart attack in the line of duty.

The statue stands as a fitting tribute to firefighters who have died in performing their duties but also pays tribute to all firefighters who risk their lives every day. At night, the sculpture appears as if the firefighter is climbing a ladder made of two beams of light coming from two inground Elation Proteus Maximus™ LED profile luminaires. 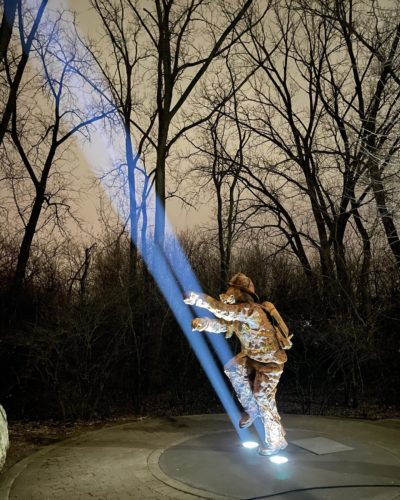 “Paul Kuhn was the mastermind behind the memorial,” says Dark Moon Designs’ Natalia Janusz who heads the company along with Paul Thomas.“He had the idea of the two beams butdidn’t know how to execute it and that’s why he brought us in.” The project was focused on more than the lighting system however,but also on how it was encased and could function in a permanent environment. Dark Moon Designs consequently brought in Intelligent Lighting Creations (ILC) to help with gear and power solutions so Dark Moon could focus on physical elements like the chassis, portholes, ventilation, etc.

Finding an appropriate light
Two lighting fixtures were requiredfor the project along with a control system and power distribution while the fabrication side required a ventilation system, access hatch, chassis structure, porthole design and execution. Janusz says the challenges were many with the first and biggest being to find an appropriate light for the project. “Right in the beginning, we knew we needed something bright,”she states.“We played with the idea of integrating an atmospheric system and having that run constantly, but knowing Chicago weather we knew that would just be an open can of worms from the start. We chose to then put our cards on something incredibly bright so that atmospherics were not needed. The other obstacle was finding a light that can provide an incredibly tight beam to fit the Ladder vertical supports.” 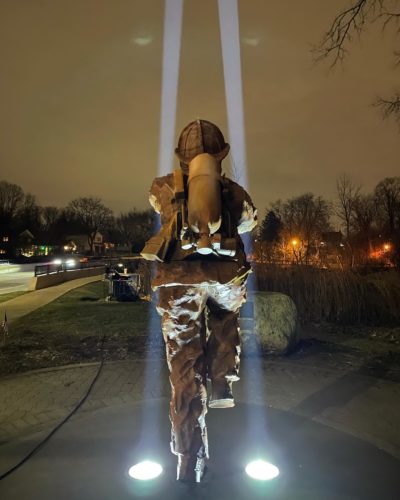 The design team initially looked at Elation’s arc-source Proteus Hybrid™ but eliminated it in favor of an LED source option. “As a company, we truly strive to make things as efficient and stand-alone as possible. As we moved forward we knew an LED source would be phenomenal to have, it needed to be IP rated (even though the chassis is watertight) for our own security, and the lights needed to be intense enough to be seen without atmospherics.” She adds that heat dissipation was also important and was one of their top focuses throughout the project.

The designer says that Scott Hosford from ILC suggested the Proteus Maximus for the project.“It was coming through their shop to go on another show and it hit him that this might be the light we needed!” Janusz relates. “Using an LED fixture saved us a potential lamp change 2-3 times a year and the lower power consumption was a plus too. We had 120V readily available and with the Maximus being LED, it was easy to integrate them.”

Power and more
The Proteus Maximus’s 50K lumens of output was essential in creatingthe two powerful beams of light that form the rails of the ladder yet the fixture’s framing shutters and 5.5° to 55° zoom were also key components. “We actually shuttered in the beam to carve out a rectangle similar to a firefighter ladder which is crazy to see in person as you walk around,” Janusz says.“It cleans up the beam super well and creates a ‘doorway’ on the clouds when the cloud ceiling is low enough. We knew the Maximus would be bright, but when we saw it in person for the first time outside, wow!”

Chassis, portholes, focusing
An important obstacle to overcome was ensuring that the size of the chassis below ground – a 10′ diameter circle – was large enough to roomthefixtures.Worried that the lights would hit each other and the chassis if they recalibrated, the spacewas made big enough to allow them to calibrate with a few inches to spare on each side. The lights were set on custom-built rolling carts and keyed into a locked position so they cannot move but can be unlockedif need be.Creating a chassis underground to permanently house two large LED lights was no small task, according to Janusz, who thanks Intelligent Lighting Creations for helping to achieve the vision.Anotherimportant stepshe mentions was ensuring that the porthole exit points were safe, secure, and strong. “We had to fabricate them from scratch, pulling materials from all different sources and 3D printing parts to make it all work.” 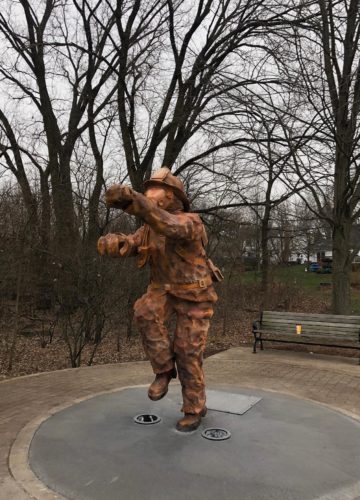 Another challenge was the focusing of the lights. Janusz explains: “We drafted scenarios on Fusion360 software and confirmed that it could work, but we were focusing pretty much ‘live.’ The chassis has a basic drafting we went off of, but everything else was fabricated as we pushed forward. The portholes married off the one solid number the entire team could work off of, and that was that the “Ladder” was at a 62-degree angle. So everything was truly built around that. And luckily, the first focus which was about a week before the reveal was hugely successful!”

Most challenging project to date
Janusz calls the process with Twelve Limbs an yet says everything was coordinated to a specific timeline. The Dark Moon Designs teamcame in three weeks before the reveal to fabricate the chassis and tie up loose ends on the statue with Paul Kuhn. Flooring and the moving light carts were put inbefore placing the two fixtures in the ground.The statue then had to be set on top of the chassis and welded.

“It was our most challenging project to date. It’s a project that needed brand new, cutting-edgetechnology and would not have been possible a year ago. The Maximus seemed to be the only  fixture for the job,” the designer says before summing up, “We are super proud of the memorial and feel it is truly groundbreaking as far as what permanent sculptures can be.We have unlimited gratitude to the Fire Department of Naperville for being open to such a groundbreaking memorial.” 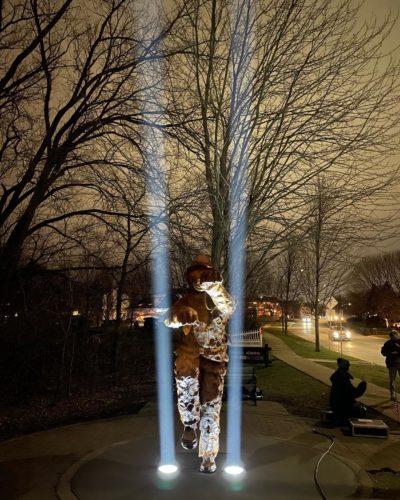 Janusz commends Luke Salvesen as a huge supporting artist on the Twelve Limbs Art Studio side as well as Tom Kuhn. Scott Hosford and Scott Falbe of ILC helped iron out system details, she states,while Michael Kelly from ILC was the control system programmer on the project.