The 2020 E! People’s Choice Awards (PCAs) was again staged at the Barker Hangar in Santa Monica, California, USA, and lit for the third consecutive year by Tom Sutherland of DX7 Design, working for production company Den of Thieves. 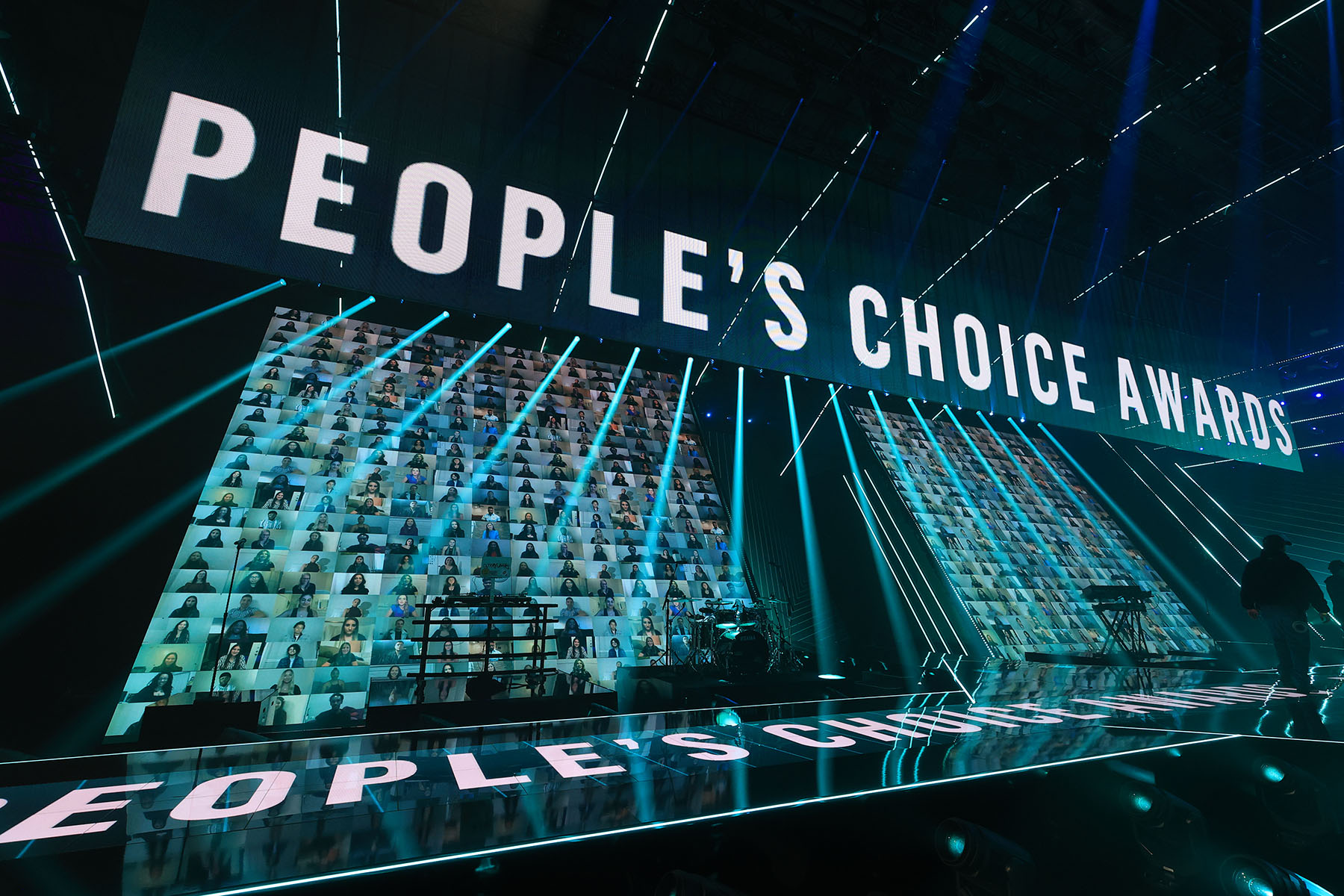 The popular online-voted awards show that recognizes achievements across multiple fields of entertainment took on a different format this year, with a digital live audience replacing a real one in the venue, all requiring a novel approach by camera director Ryan Polito, creative director Paul Caslin and production designer Florian Wieder.

Tom was delighted to be part of this highly talented creative team who were dedicated to delivering an innovative and imaginative presentation concept aimed at meeting everyone’s high expectations.

The two-hour show hosted by Demi Lovato included two live performance segments – by Justin Bieber and Chloe x Halle – plus multiple awards, with many winners rocking up in person to receive their trophies and their share of the adulation. 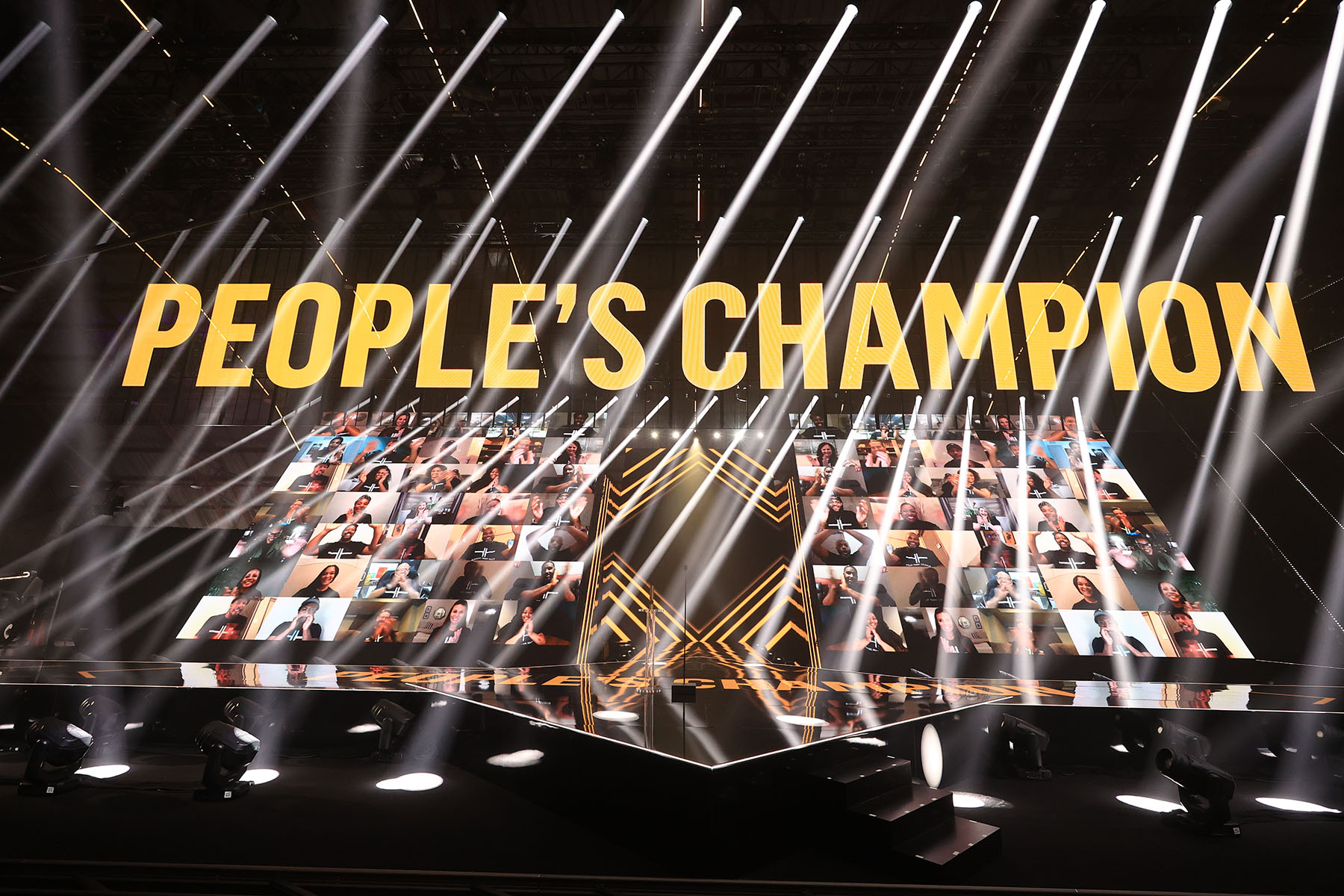 The show raised the bars of ‘glamourous’ and ‘cool’ as well as meeting the very strict Covid-compliance standards that the industry has imposed on itself! One of many high points was Jennifer Lopez’s rousing acceptance speech for her People’s Icon Award, which was eloquent, powerful, and heartfelt.

It was Wieder’s first year of designing the PCA extravaganza, however he and Tom have worked together on many previous projects and enjoy a great artistic synergy.

The stunning set comprised a long, black hi-gloss runway – the central section of which was a video floor – that traversed the Hangar lengthways, with several huge angled sections of LED video wall installed on both sides which had to be ground supported due to the roof weight loadings.

At the end of the runway was another section of stage and an LED screen, and along the same trajectory as the catwalk itself was a long, blow-through screen that dissected the space lengthways. Flown on a Kinesys automation system, this moved in and out at strategic moments throughout the show.

One of the tricks this screen was used for was to reveal stars coming up to collect their awards. Images and text intros of the host and artists played out on it beforehand, and it would then lift to reveal them there for real! 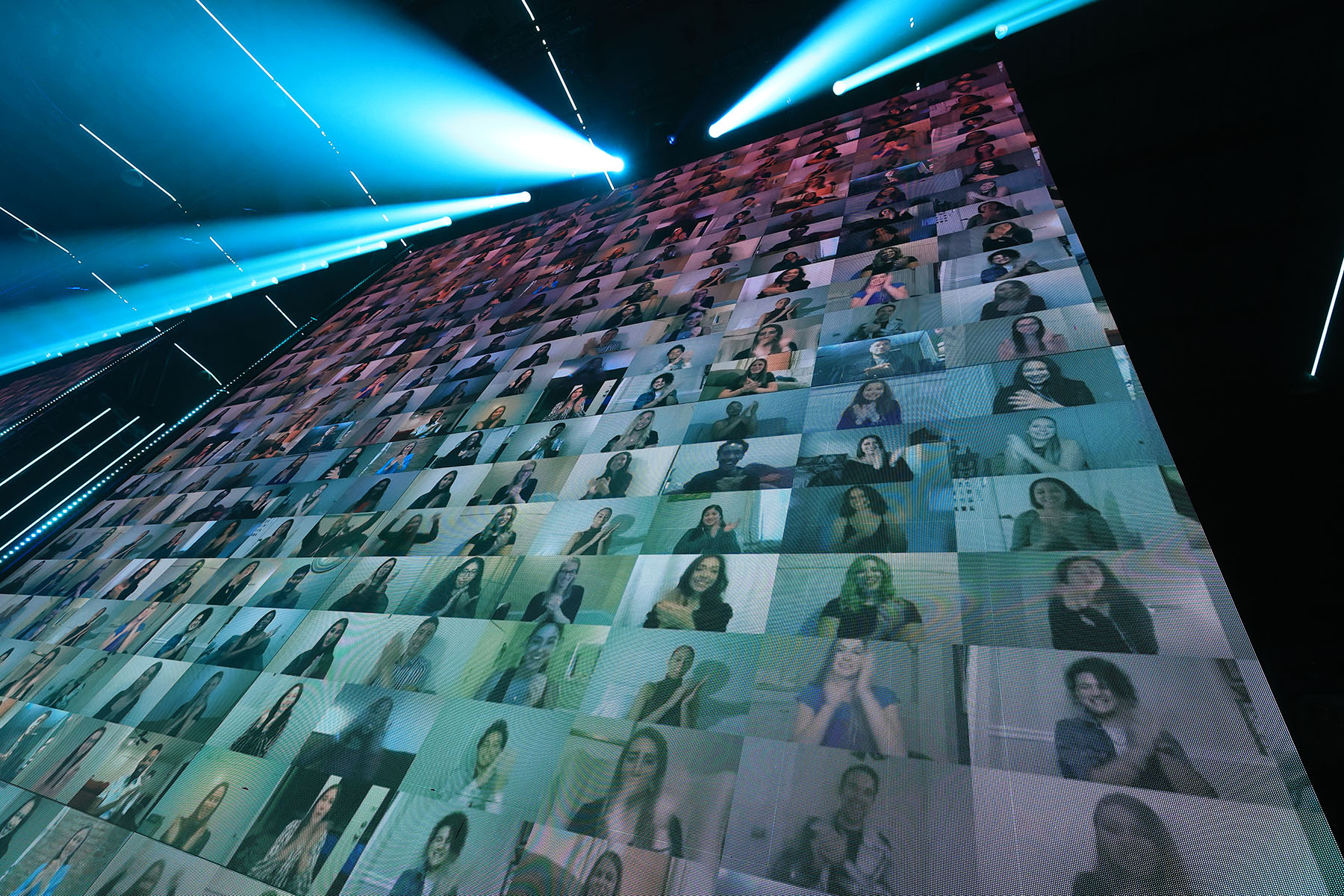 It was a challenging environment for Tom to light. Very bright due to the aggregate amount of LED, so he had to position precision key lighting all along the full length of the runway and around the set area, then deploy effects luminaires where they would have maximum impact for all angles of the 15-camera shoot.

The MegaPointes were rigged in the roof trusses and on the floor … parallel with the runway.

Once Tom arrived on site, the MegaPointe count on the floor increased to complete the light tunnel look that evolved as they started to block the show, so the Felix Lighting team rapidly dispatched 24 more fixtures!

All the screen graphic content – created by Blink – was based around lines, angled color blocks and bold texturing, so Tom complemented this with beamy lighting looks that accented and defined the structural elegance of the space.

MegaPointe beams pierced and sliced through the air, adding layers of depth which looked great on camera and everyone loved.

MegaPointes are Tom’s current go-to fixtures for achieving these very specific looks, “they are so flexible and offer endless options to transform the space,” he enthused.

He also highlighted the shape of the venue’s roof with multiple pixel-controlled LED battens using around 400 lights in total on the rig plus approximately 300 LED tubes. 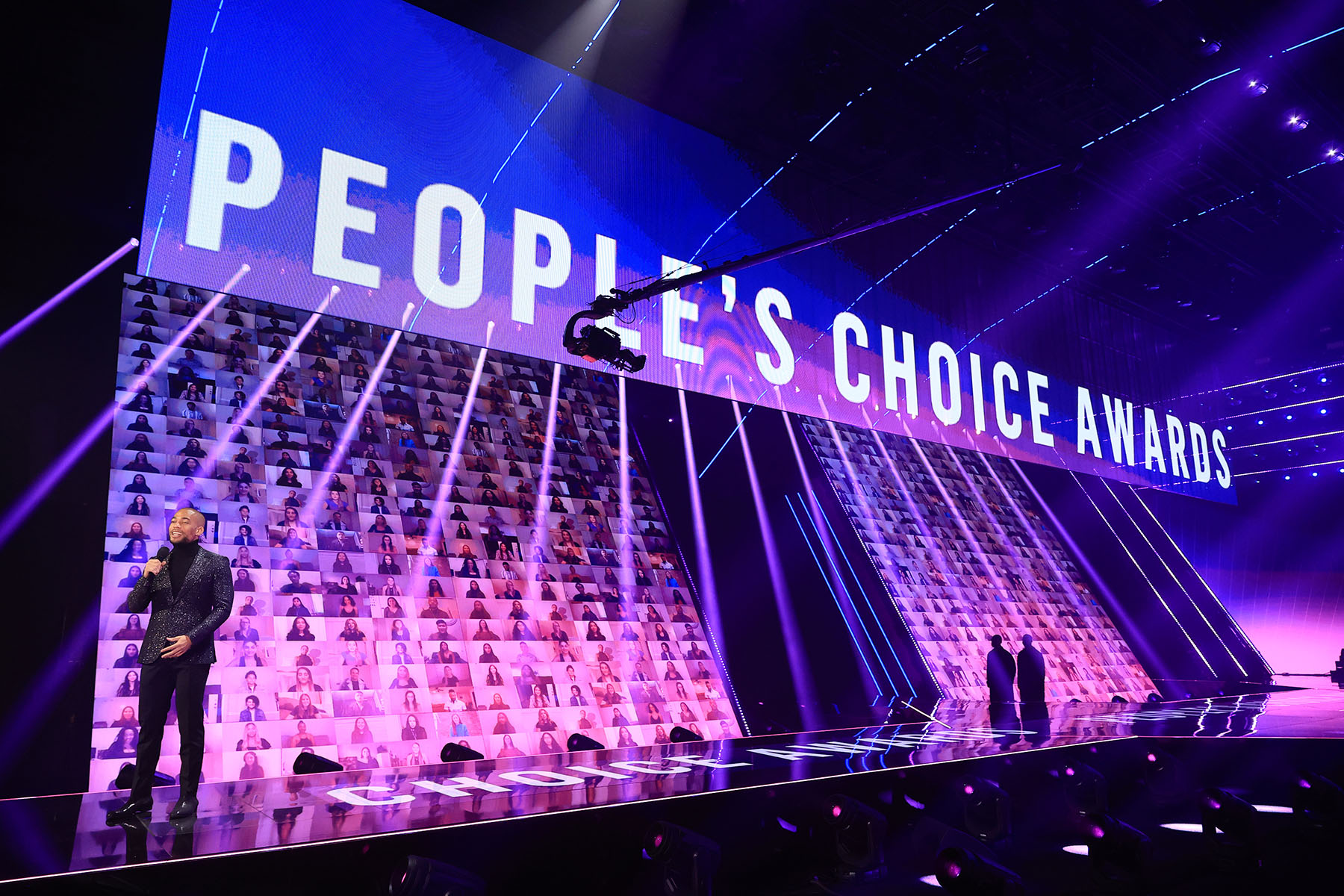 “The idea was to immerse guests and viewers as much as possible in the show and the vibe,” commented Tom. It’s a treatment that he’s used – differently but equally successfully – on other recent productions like Dancing With The Stars, which also featured Robe moving lights.

With the public taking in so much screen entertainment since the pandemic, the pressure is really on for productions to come up with new and original looking concepts that work as televisual art!

With that two-hour run time and just two live entertainment segments, it was vital that things kept fluid and moving as well as evoking at least some of the energy and atmosphere that would normally be automatic with a live audience in the space.

Tom worked alongside a fantastic FOH team comprising Joe Holdman and James Coldicott who programmed the grandMA console. The gaffer was Chris Lopez, the lighting technician was John Cox and his account handler at Felix Lighting was Nicole Barnes. “They were all brilliant!” he declared.

Two days were spent prepping the lighting kit at Felix’s warehouse, with a week to load the whole production into the venue which included constructing the custom side frames for the LED screens.