With a long and storied history, professional boxing has carried an undeniable mystique with events that are larger than life—the allure of bright lights, a commanding introduction from the announcer, and fighters unleashed by the iconic ring of the bell. But for most live events in 2020, one major element is missing—the roar of ring-side fans. When Arizona Sound Productions was hired to provide video and sound production for a string of boxing matches across the US, they found themselves with new protocols, unique challenges, and time to kill. 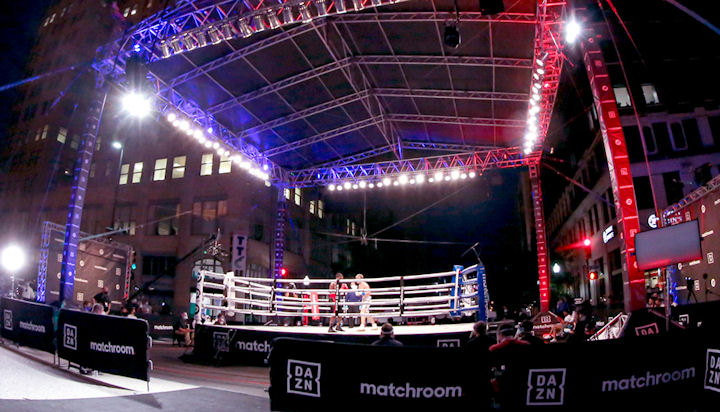 “Working this year has been interesting to say the least,” said Jared Jasinski, owner and lead engineer for Arizona Sound Productions (AZSP) based in Phoenix. “With COVID restrictions we’ve been forced to be more creative and think outside the box. We’ve had opportunities to create something different for viewers at home, without an audience we can put a boxing ring anywhere [outdoors] and make it look great on camera.”

Arizona Sound Productions got its start in 2011 with small to mid-sized church and school installs, moving into sound reinforcement for live events and festivals. From there the company grew into larger events for Fortune 500 clients, MTV concert series for one, and lending support for Super Bowl XLIX back in 2015 at the University of Phoenix Stadium in Glendale Arizona.

On August 15, 2020, AZSP set the stage in Oklahoma, making boxing history with what has been called the “street fight” concept. AZSP clients’ Holden Productions and Matchroom Boxing dropped a boxing match in the middle of downtown Tulsa for a night of fights headlined by Cecilia Brækhus, defending her Women’s Welter Weight title against contender, Jessica McCaskill. The match was staged at the intersection of East 5th Street and South Boston Avenue with no fans present. Medical protocols and strict social distancing guidelines were in place for a full night of action.

“It was an intense process,” described Jasinski. “COVID testing was required for everyone on my crew, before traveling to Oklahoma, then again when we arrived. Once we were all cleared our driver took us to the hotel, where we received quarantine wrist bands. A staffer then escorted us straight to our rooms where we were basically quarantined for two days,” added Jasinski. “It was an odd feeling, but nice to run through details, finish CAD work, have ZOOM calls, and have some time to review our game plan for the week. It’s not a fun process, but at the end of the day we’re glad to be working.”

Using EASE Focus to determine hang points and angles, ASP designed a small line array rig with 16 RCF HDL 6-A Active Line Array Modules. Line arrays were hung around the boxing ring to cover the floor level, made up of judges, fighters, staff, production crew, refs and boxing officials. “The HDL 6-A has been a game changer for us,” said Jasinski. “It’s a great sounding, powerful speaker with an amazing price point. We jumped on board right away. We could throw it up on a stick for small gigs, to building 10-module arrays for festivals—it’s a very versatile box. We built 4 box arrays in stereo hanging over the ring on the north side to cover the ring walk, 3 box arrays on the south side, and one box for the east and west, basically straight down to hit the floor area.”

With so many sporting events opting for no fans during the pandemic, many production companies are using the opportunity to fill in the blanks. The television experience for fans has only changed slightly, but in a way, the energy from a crowd is a major contributor to the “live feel”. “We didn’t add any crowd noise or anything like that,” added Jasinski. “We did take advantage of capturing natural city sounds—it played off that raw, street feel very well. We had ambient mics set up around the ring to get pops from punches from the fighters and things like that. With all the streetlights changing colors throughout the match, visually it was a nice touch.”

Arizona Sound Productions will continue the tour with press conferences, weigh-ins, and boxing matches, through various states in the US. According to Jasinski, the new partnership is described as the ideal match that ensued by being in the right place at the right time. “Originally the (Jacobs/Chavez) fight was supposed to be in Vegas and something happened where the commissioner wouldn’t allow the fight there, so it moved to Phoenix,” said Jasinski. “There are few downtown venues [in Phoenix] where we have house systems installed, and they recommended us to help out at a press conference. What started out as being available to set up mics and hang a few banners, ended up evolving into a full production gig for a sold-out fight across the street in the arena [Talking Stick Resort Arena] for the Julio Cesar Chavez Jr vs Daniel Jacobs fight. Things went little crazy that night, 5 rounds in Chavez called the fight, and a riot damn near broke out. Nothing was damaged, thankfully”.