The arid, exquisitely cinematic beauty of the Arizona desert and the paranormal charm of the Arcosanti community united for the staging of “Existential Reckoning”, an ambitious and extraordinary site-specific streamed concert of the new album by ‘supergroup’ Puscifer initiated by Maynard James Keenan. 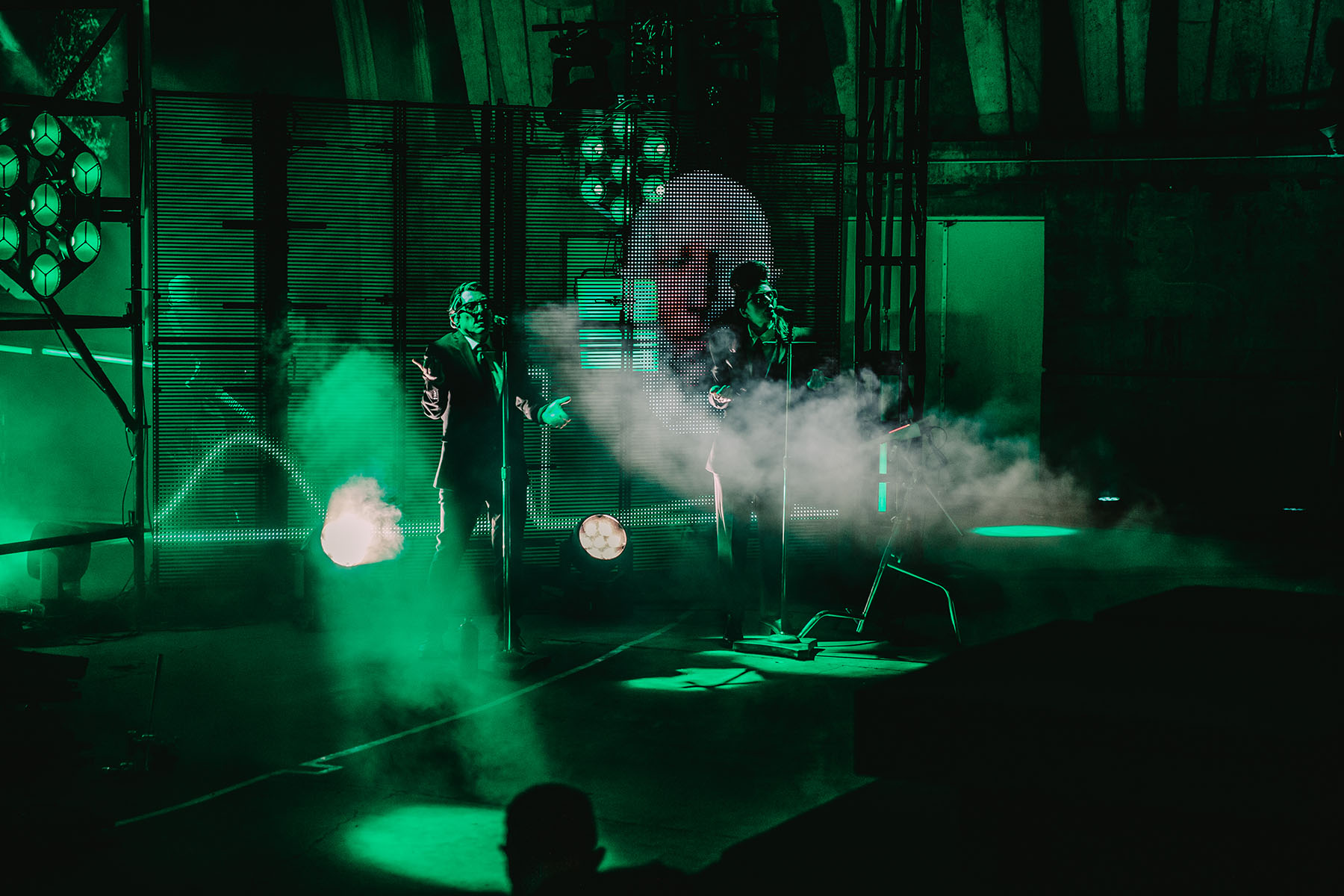 For all the incredible works we are seeing created with VR, XR and AR … there is nothing to beat the ethereal heartbeat of nature and the concept of experimental living as a surround environment.

Lighting designer Sarah Landau was thrilled and intrigued to be asked to light the concert livestream, having been fascinated with the idea of Arcosanti for some time but not yet visited. She added Robe MegaPointes and PixelPATTs to her lighting design for this intricately constructed performance movie which took place over three equally interesting locations around the site.

Keenan lives about an hour’s drive away from Arcosanti, the ‘arcological’postulation of Italian American architect Paolo Soleri, designed to connect architecture and ecology as a philosophical base for democratic society.

The album backstory involves an alien landing on earth and trying to assimilate. As Keenan declares in the mysterious concert movie trailer, Arcosanti would be a perfect place to achieve this goal! The settlement itself is made from the materials of the desert with the first structures built in 1970 and the community still ‘under development’.

Sarah has worked with Puscifer since 2016 and lights A Perfect Circle, another of Keenan’s cerebral and highly creative musicprojects.
The “Existential Reckoning” video shoot was directed by Adam Rothlein of Ghost Atomic Pictures together withthe band’s manager Dino Paredes, and took place in three different locations around Arcosanti–the central amphitheater;the vaults (two large barrel-shaped structures above ground) and in the middle of a patch of desert just outside the main development.

The set was designed by Mat Mitchell, guitarist, and producer of the album, who also mixed audio for the stream. He presented the overall concept to Sarah when they first discussed the project in early August. 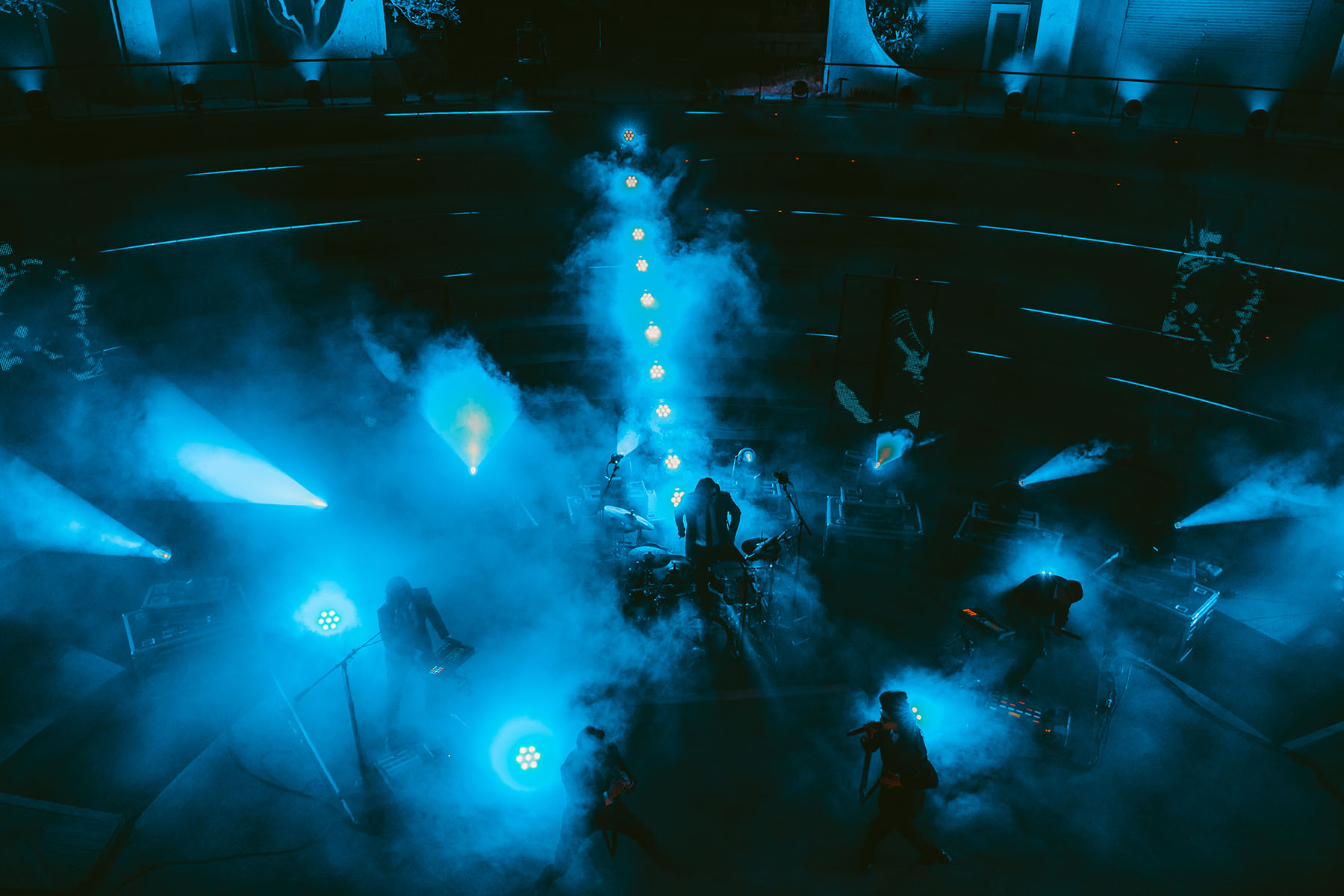 The scaffolding and trussing set structures also provided anchor points and positions for both lighting and video elements.
A key to the show’s ambiance was the visual and sonic flow from one location to the next, ending with a spectacular sunrise. The different positions of the vocalists and evolution of camera shots was also fundamental to the narrative, which started with close-ups and lots of shadows and visual trickery, gradually revealing more of the stunning landscape, location, architecture, context,and ambiance as the album progressed.

Lighting was left entirely up to Sarah’s vision and interpretation, and the six cameras then had their shots adapted and positioned according to her lighting layout.

Once the initial lighting renders received the green light, she started collaborating closely with Mat and his colleagues who were producing the video playback content. They shared rough drafts of the materials being prepared for each song,which in turn inspired some of the colors, textures, mood, and lighting cues of the piece.

The colors were then further refined and optimized for the medium-resolution mesh screen product and discussions shifted to specific accent and focus points.

A week of band rehearsals in Burbank allowed Sarah to pre-vis intensively,which was followed by five days of technical rehearsals– with the full rig set up – at the Yavapai College Performing Arts Center in Prescott, Arizona, where they finessed the interplay between lighting and playback video.

For sites one and two, the desert and the barrel vaults, an industrial scaffolding tower in the center of the action with 12ft wide by 8ft high video panels emanating from the four corners, splitting the playing area into quadrants, each of which was completed with a stand-alone vertical trussing tower several meters further back. 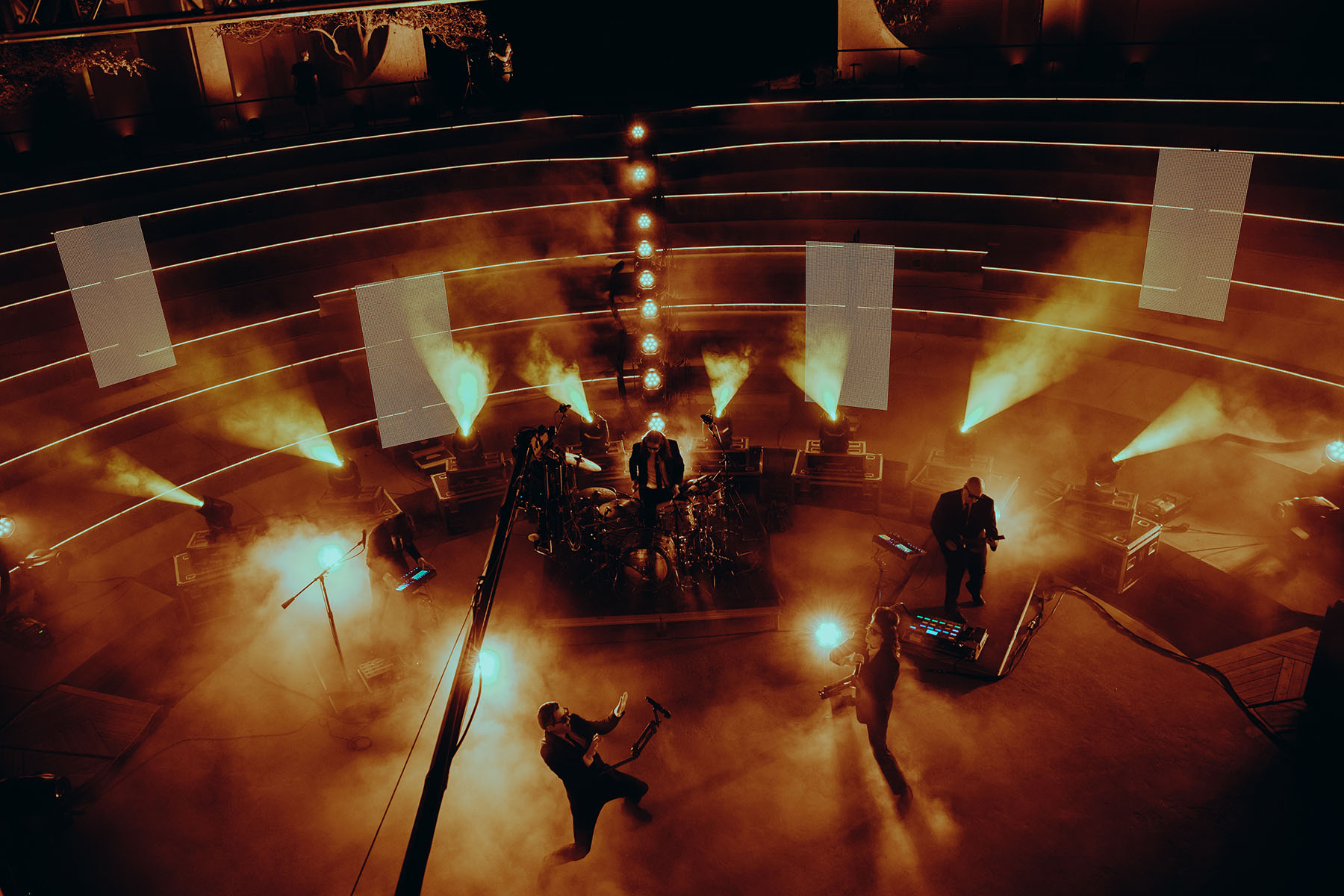 Lights were rigged on the center scaffolding, on the four trussing towers and at the ends of the video panels with additional fixtures on the floor.

For site three, the amphitheater, sections of video screen were deployed in the tiered seating and acted as a backdrop while the band faced upstage.

At site one, four MegaPointes were positioned at the edges of the performance space at 3,6, 9 and 12 o’clock and four feet back from these were another four, one on top of each of the trussing towers.

In the barrel vaults, only the MegaPointes on the truss towers were used, while in the amphitheater location, all eight MegaPointes were sat on flightcases behind the band in the venue’s pit area, in front of what would normally be the downstage edge of the stage.

Four of the eight PixelPATTs in sites one and two were also rigged on the vertical truss towers, with the other four on the center scaffolding structure facing into the four quadrants where the band members were playing.

The MegaPointes were used for piercing beams blasting into the night sky “when the wind gods permitted the fog to hang,”elucidated Sarah, orfor shooting across the performance space creating bold symmetrical patterns that looked very cool for the drone shots!

The PixelPATTs were utilized for eye-candy effects, filling the back-of-camera space with colors, textures, and visual impressions harmonious with the video content.

Sarah has used MegaPointes in several previous designs and knew they would be “reliably bright, fast, and easily stretch infinitely into the sky”. 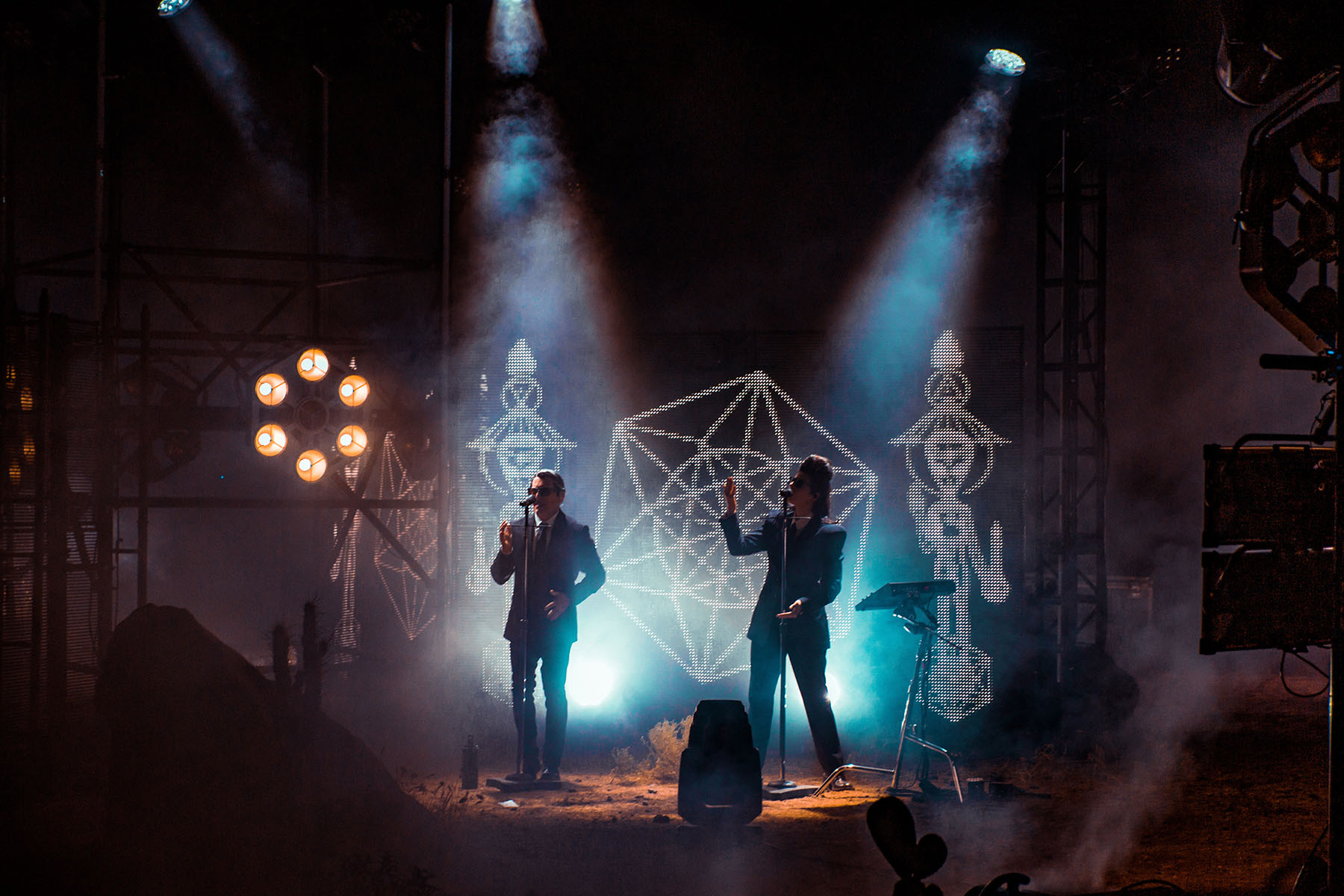 The PixelPATTS were suggested by Ryan Knutson at Thornton, Colorado-based Brown Note Productions, who delivered sound, lighting, and video.

Sarah had never used them before and initially ordered four. However, when she saw the fixtures in action and the effects they could produce, another four were requested and hastily driven out to site!

“They were a perfect fit with the retro sci-fiambiance and sacred geometric vibes of the album art and video content,” she stated, also pleasantly surprised at their light weight and durability. “They’re definitely coming on the upcoming tour!”

Sarah has used Robe products extensively in her work for some time. Apart from producing some “awesome” fixtures regularly ticking all the ‘bright’ and ‘reliable’ boxes, she greatly values the support and friendliness of Robe North America’s sales teams.

In addition to the MegaPointes and PixelPATTs on this concert video shoot, Sarah had several other lights on the rig including LED washes and profiles, sky panels, LED tubes and LED PARs, all controlled off a grandMA full size console.

The lighting cues were initially programmed and timecode recorded by Joe Watrach in Burbank. “I very much appreciated his speed and organization skills,” explains Sarah who took over for the updates during the Arizona production rehearsals and also operated herself during the filming.

No camera rehearsals made delivering this imaginatively ambitious and unique show even more of a challenge as the first time Sarah saw any screen previews of the lighting looks was while filming the takes! Having that showfile created so tidily and with the ability to make swift and clean adjustments greatly assisted this part of the process.

Being outdoors, they were at the mercy of elements like wind and dust, which required black art skills in trying to control and regulate fog levels! 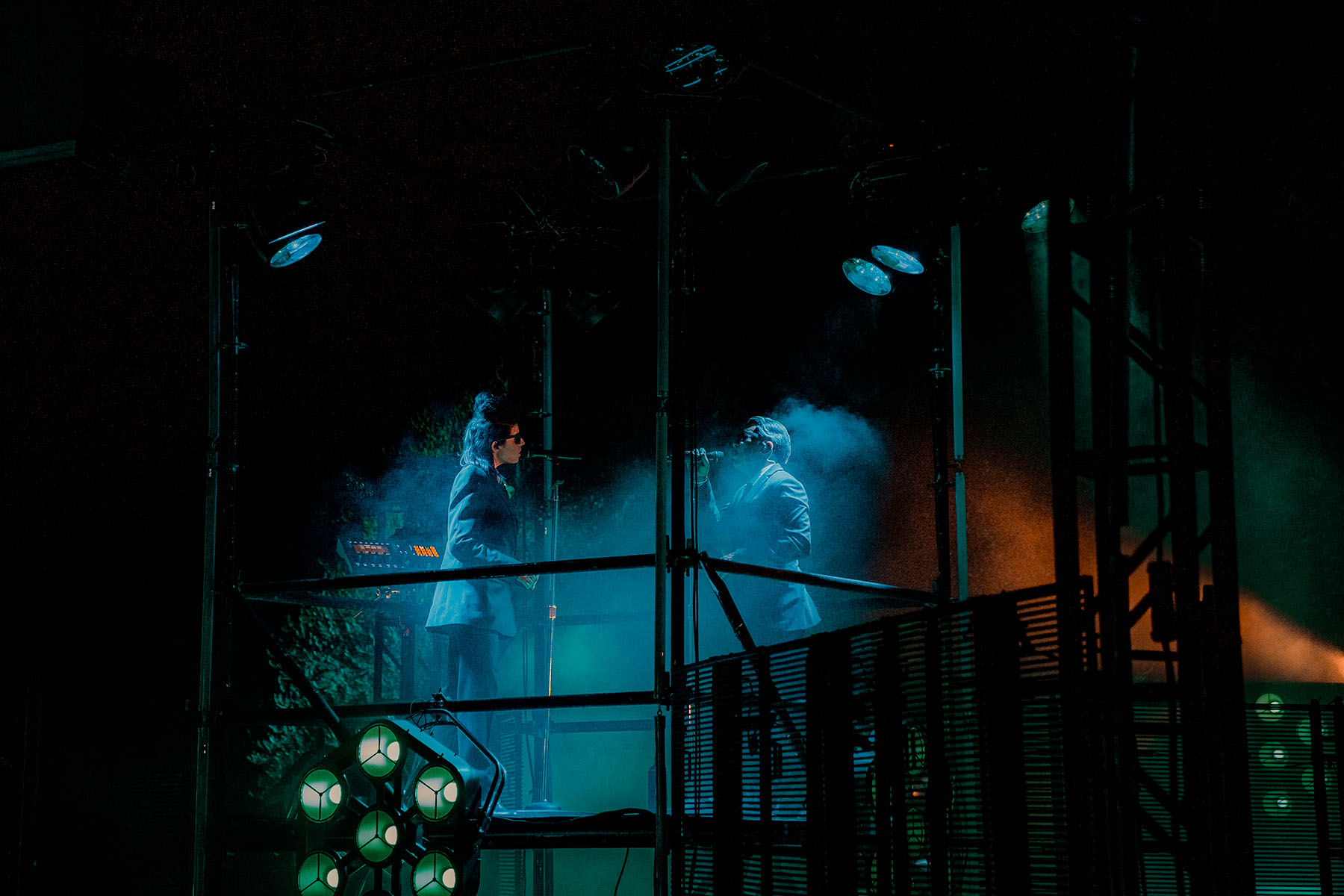 The filming schedule and the environments were also intense!

The first ‘day’was a grueling 38 hours with a short power-nap break for the crew. The desert site rig was built, programmed at night and filmed in the early hours, then broken down and moved to the vaults for another recording session to start as soon as darkness fell!
During the days they contended with 100 degrees plus desert heat and searing sun, and during the nights rattlesnakes and scorpions kept everyone company!

They also had to ensure the site was operated as Covid-safe, with regular temperature checks, sanitizing, social distancing and masking.
Despite all these demanding conditions, the results were truly spectacular, and the sounds and visual integrity of the concert have been highly acclaimed and enjoyed as an integrated opus of music and art.

Sarah, who lives and works internationally, was delighted to join forces with Ryan Knutson, Joe Casper, and the team at Brown Note Productions, with Joe producing all the pre-production drawings and renders as well as crew chief’ing on site. “I couldn’t have wished for more with their responsiveness, attention to detail and totally positive attitudes of the LX / VX crew Joe Casper, Kyle Wolfe, and Parker Wall. Everyone seemed as inspired by the project as I was and we all enjoyed the beautiful vibes!” she concluded.

Ryan and Brown Note Productions have worked with the concert’s producer Danny Wimmer Presents since 2014, and relished this opportunity to be the technical partner “for this incredible and particularly fun project”.

After an incredibly tough year for everyone, Ryan hopes that recent positive news on the vaccine front will help energize the live music and events industry globally and open more opportunities for all to rebuild and plan a post-Covid recovery.