Situated near Wermelskirchen in the Bergisches Land, Schloss Burg is one of the largest completely preserved castle complexes in Germany. Built in the 12th century as the ancestral seat of the Counts and Dukes of Berg, and extensively restored between 1890 and 1914, the castle is one of the landmarks of the Bergisches Land and has been used for years as a museum and for various cultural events. The entire complex has been a listed building since 1984 and is operated by the Schlossbauverein Burg an der Wupper. 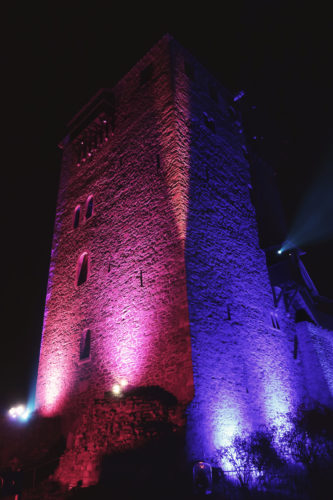 After a planning period of almost a year, Burg Castle became the scene of the Castle Illumination for the first time this October—and despite, or perhaps because of, the current coronavirus situation, the event was a complete success.

“In the course of the year we had to reschedule several times and, at some point, threw the entire concept overboard,” stated Uli Hoppert from Siren, the technical service provider for the event. “We said goodbye to the original idea of not only livening up the castle with a light installation but also with real actors at the beginning of the coronavirus crisis,” he recalled. But that’s not all: “the upcoming renovation work also repeatedly thwarted our plans. Medieval castles were simply not planned for a modern event such as this.” His conclusion? “Narrow corridors, steep slopes, and the extensive protection of historical monuments demanded a lot of inventiveness from my team.”

A colourful and quite unusual mixture of spotlights and lamps were used. “With the exception of the battlements and some interior rooms, only IP65-rated fixtures were deployed,” continued Hoppert, “as the devices had to withstand the Bergisch weather for around six weeks from the start of construction to the end of dismantling. There were also large areas outside the castle where everything had to be kept practically unprotected from theft and vandalism for several weeks.” 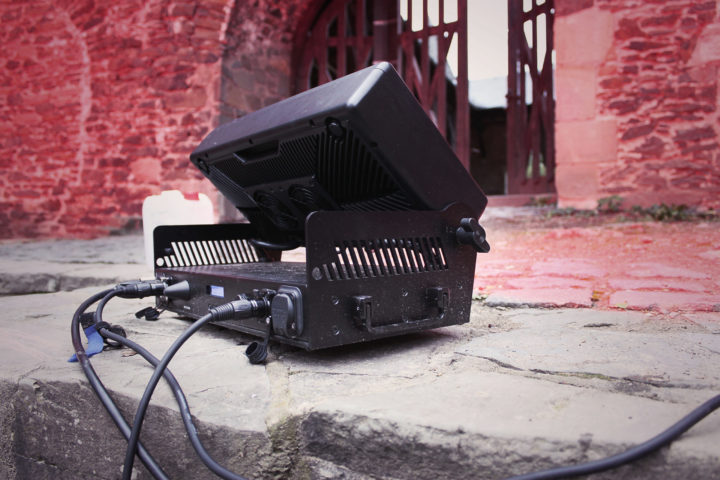 Fusion Supernova for the walls
Within the walls, the selection very quickly came down to a total of eight Fusion Supernova from GLP. These were used in the Brunnenhof and on the north terrace. “Just set it up, switch it on, and forget it…” was Uli Hoppert’s conclusion. “This is a really powerful fixture with great colours and a very clean radiation pattern. We had originally calculated to have significantly more of these lamps, but with a trial lighting back in spring it was clear what value these lamps would bring.”

Another eight Supernovas made further eye-catchers, making the 40m-high keep and the pillory in front of it visible from afar, both bathed in magical light. However, these were not easy to install, because the keep rests on a rock ledge that had to be climbed in order to transport the fixtures to the intended location. However, the effort was absolutely worthwhile, because the towering façade shone seamlessly in the evening hours, glistening in the light of the Supernova.

Distinctive edges around the keep
The floodlights around the keep were flanked by GLP impression E350 moving lights on the corners of the walls. “A geometric body like this donjon literally invites you to play with spots and washlights,” added Hoppert, “so the idea for the use of the LED washlights and the output of these compact moving lights fitted the application perfectly.” Razor-sharp beams, crisp colours and the matching Airdome (as protection against four weeks of continuous mountain rain) were the features. 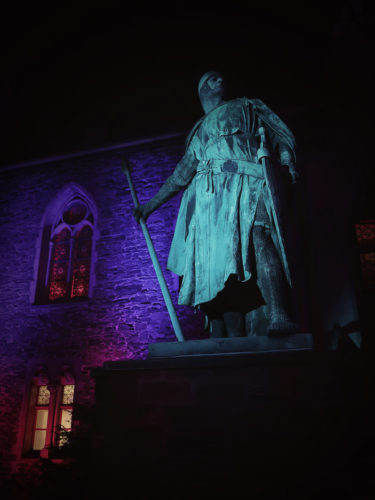 The Lord of the Castle and his Coat of Arms
The impression E350s were also used for special tasks elsewhere. The first thing to do was to highlight the statue of the Lord of the Castle, for which a total of three impression E350s were used; one well protected in the dungeon of the damsels, another below a crow’s nest on the keep, and one on the ledge at the keep. “Particularly with the spot under the crow’s nest, there was no alternative to the impression E350 for very simple reasons,” explained Hoppert. “There was simply not an inch of space left—therefore, the baseless design of the impression series and the compact design were able to demonstrate their advantages once again.”

For the coat of arms of the Lord of the Castle, an impression E350 provided another eye-catcher. Specially made by the Gobocompany in Nettetal, the Bergische Löwe was projected as a four-color gobo onto a roof opposite—at a distance of around 15m, and in a format of around 6m x 6m, crisp and glistening. “The reaction from the visitors was amazing,” recalled Hoppert. “In fact, even photographers took the image of the lion for UV painting and refused to believe that there was actually only a single, compact spotlight behind this projection onto black slate.”

Problem solver: MBL 20
Not planned originally for this installation, six Fusion MBL 20 ultimately turned out to be real ‘Swiss Army knives’. “When planning this event, Andreas Brandt from GLP made me aware of these floodlights rather casually and actually a white light didn’t really fit into the lighting concept. Nevertheless, I was curious and I don’t regret it for a moment. The idea arose almost spontaneously to light up the white gable parts of some buildings in the inner courtyard of the Castle and to consciously forgo colour as a contrast to the rest of the staging. With the tunable white and a considerable output, the MBL 20 proved to be a perfect choice and brought either warmth or a glowing cold to the half-timbered façade of the castle—and the Bergisch weather could not harm these lights at all.”

In addition to the S350, numerous other spotlights from GLP were used, including the impression FR1, impression X4 atom and impression X4 S from Siren’s inventory. 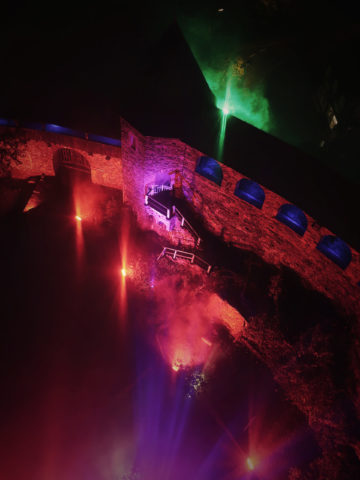 Until next year…
“Next year will hopefully be without coronavirus, but it will definitely be with GLP and my team,” confirmed Hoppert. “I would like to thank Julian de Windt and Reinold Melles for the DMX infrastructure and programming, Thomas Raatz for the critical eye on the colours, and Florian Thomas and the company Tractive Power for around 17km of signal and power cables in every corner of the castle. Plus, of course, the Schlossbauverein and the employees at Schloss Burg.”