Doing live events in this period seems almost unthinkable. Even more if you immagine one fully managed by a team of only Italians and realizing it in another country. We spoke with Emanuele Morlini (RCF Product Specialist) who told us about his “French experience” at the Bellator MMA event in the Accor Arena in Paris. 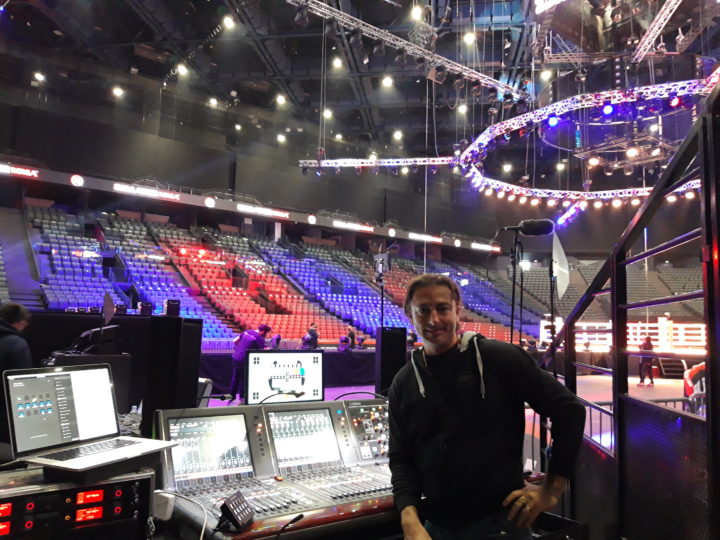 ZioGiorgio: Hi Emanuele, how this event was born?

Emanule Morlini: The event took place in October in Paris after an imposed stop of  live shows. It was the presentation of the Bellator MMA (Mixed Martial Arts) extreme martial art that has recently become legal in the French territory. As you may have seen in some American programs, the fight takes place inside an octagonal cage in the center of the building and the fighters are allowed to use any type of attack except for kicks in the lower parts and behind the neck. 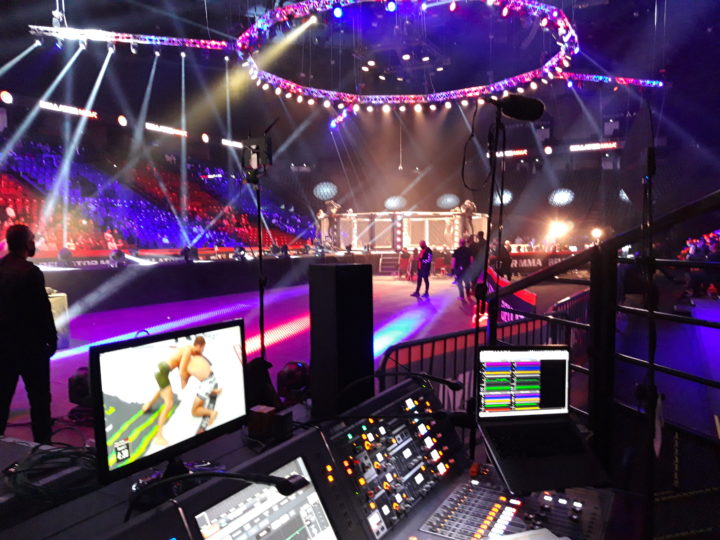 The venue chosen for the event was the Accor Hotel Arena, which is located in Paris-Bercy, and has the reputation of being the fifth largest sports hall in the world in terms of size.
The event, initially, was supposed to host about 20,000 spectators, but due to current Covid restrictions, the capacity was reduced first to 5,000 and finally to 1,000.
Therefore my initial P.A project, which involved several hangs of clusters for a 360° coverage of the whole area, underwent a great cut.
The event was divided into two sessions: one in the afternoon, with a live broadcast on the American channel CBS, and one after 11.30 pm, broadcasted live in the protected area of ​​the British BBC. The production was entrusted to the italian agency Riptide, that followed the event as a one-stop solution, from broadcast to video and from audio to lighting. The service for which I followed the audio project was Piano e Forte which provided support for audio lights and video LED.

ZioGiorgio: What was the development of the project?

Emanuele Morlini: The project started from the customer’s needs in relation to the nature of the event. Bellator in fact is mainly a television format brought to the live environment, moreover, given the numerical limitation of the audience present in the arena, the television part has taken a predominant value.
Right from the start we designed the system by making the television and live parts autonomous. Based on the indications of Claudio Giovanetti, who took care of the broadcasting for all broadcasters (CBS and BBC) as well as being the reference for the Italian production, we agreed that everything should be split independently and redundantly.

ZioGiorgio: Therefore also the P.A. system has undergone a change? 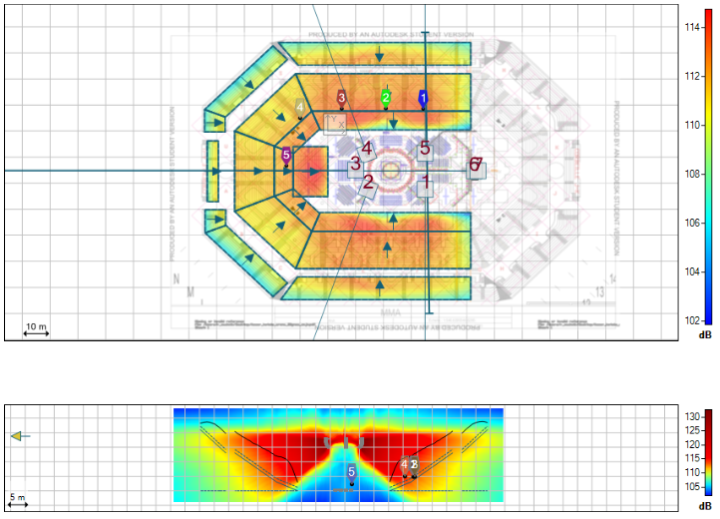 The reduced version consisted of 4 clusters of 8 RCF TTL55-A speakers plus 12 RCF TTS56-A subs positioned behind the screen in end-fire configuration which had the task to support the emotional part for the audio-video contents of the athletes’ presentations .

ZioGiorgio: I assume that there was not a large number of input channels and RF…

Emanule Morlini: Right! The main needs in terms of inputs came from the Shure Axient D which were picked up in Dante for the arena’s audio direction, and delivered in analog to the OBvan. In general, all the exchange of signals between the OBvan and the hall was realized in analog, including the various performers, DJs and ambient microphones.
It was all about fighting and bloodshed! In addition to the audio/video contents that were played during the entrances of the athletes at a quite sustained volume, we had a radio microphone for the referee and a video camera that transmitted the sounds of punches and broken bones from the inside of the ring! ZioGiorgio: Tell us something about signal management…

Emanule Morlini: The management of the outputs was done by exploiting the potential of the Yamaha PM10 Rivage system. The high number of mixes and matrixes available in the desk allowed us to manage all the audio streams with great flexibility, implementing various mixes between the different control rooms, the countless direct outs and the many RCF speakers positioned within the arena, that I chose to manage directly through on-board DSPs.

ZioGiorgio: How did you manage the health aspect?

Emanule Morlini: The production requested a preventive swab before leaving Italy and then a second swab was made before entering the building. The latter, having a validity of 72 hours, allowed us to return to Italy without further checks, despite having walked through the crowded streets of Paris, with most of the people wearing no mask at all.