“We wanted to give fans everything they’re used to seeing at a concert with moving lights, video walls, etc. and blend that with high-quality video streaming and a multi-camera setup for broadcast,” states Danny Zacharias of VYE, who designed lighting for the live stream space using gear from Elation Professional and sister company ADJ. “Add to that a Virtual Live Audience and this is really a virtual live event experience like no other.” 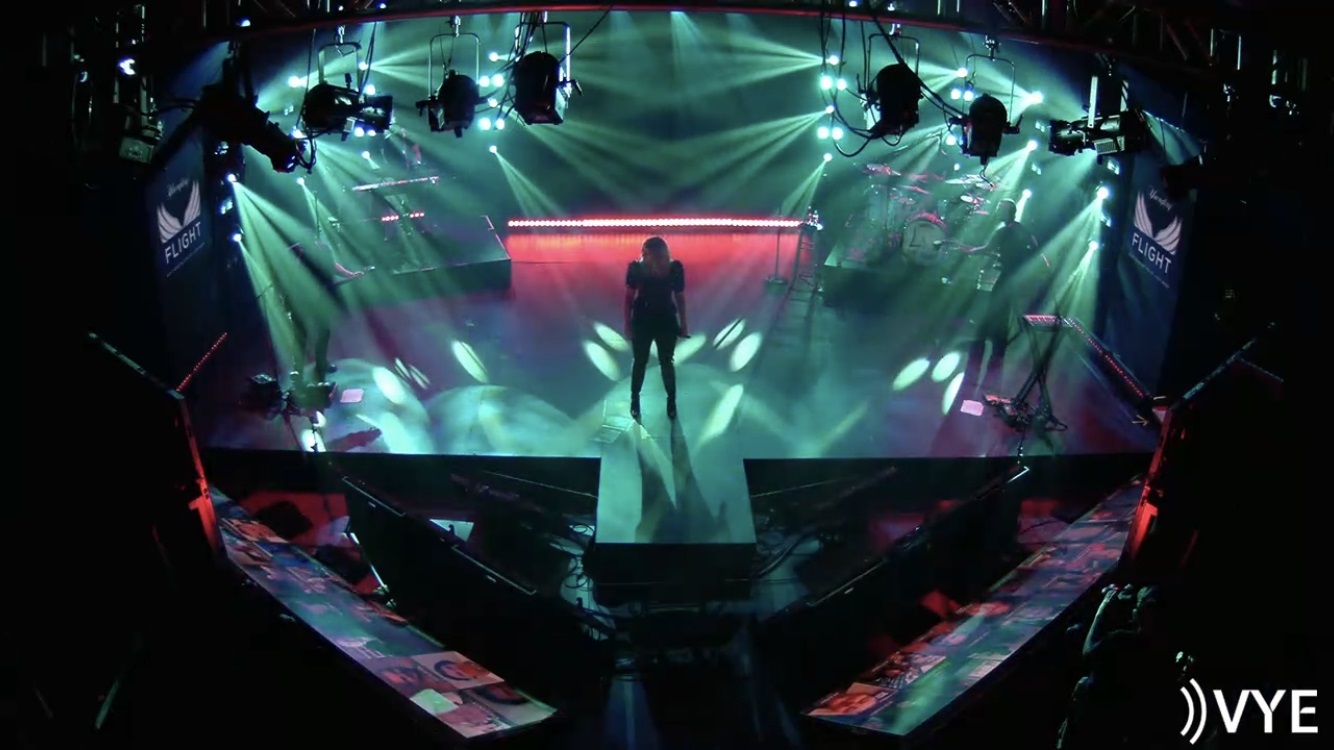 Touring and broadcast
Zacharias started working on what would become VYE late in 2019 with business partners Maggie Seidel-Laws and Jayme Braun. VYE is a turnkey producer of professional virtual events that fans can watch from anywhere. VYE handles ticketing, streaming, producing, live production, and thanks to their strategic partnerships, the studio space, gear package, and crew. “This was a pre-pandemic plan for us, but in early 2020 we got the ball rolling quickly with production partners. Everyone is trying to figure out how to offer an experience without being able to do a traditional live event,” he says. “One of the things we wanted to do was to help artists monetize streaming and start performing again so they can get their crews back to work and connect with their fans.”

Zacharias worked with GENETIC Productions, now part of PTP Live, to secure lights and video gear while audio specialists Clair Global provided the space while handling the audio side and internet backend needed to support a streaming space. The rig of Elation and ADJ lighting gear, as well as video, is a professional setup that suggests an on-the-road look but one that works well with, and looks good for, broadcast. “A lot of the design and fixture placement is there to fill up the space for the various camera looks,” Zacharias says. “From all the different angles that we’d be shooting we wanted solid key light and back light and enough interesting beams and texture, but we didn’t want to overpower everything in the room.”

As touring pros don’t necessarily know the ins and outs of broadcast lighting, the cameras used for broadcast and the color temperature requirements, Darien Koop, programmer and lighting director on the project, lent his expertise in broadcast lighting to bridge the balance between a concert look and one more appropriate for the camera. “It’s a different style all together,” he says. “A big issue you often see are concert live streams that look like a studio show. It’s all in how it is lit and the color temperatures that are chosen.” Directing in terms of overall color temperature, Koop will adjust to colder Kelvin looks on fixtures across the rig when changing from a concert to a studio look. “Sometimes we stay on one look for a while but often we’re going back and forth. We rebalance the stage based on client need,” he said, noting that they’ll be changing the design on occasion in order to keep the look fresh. 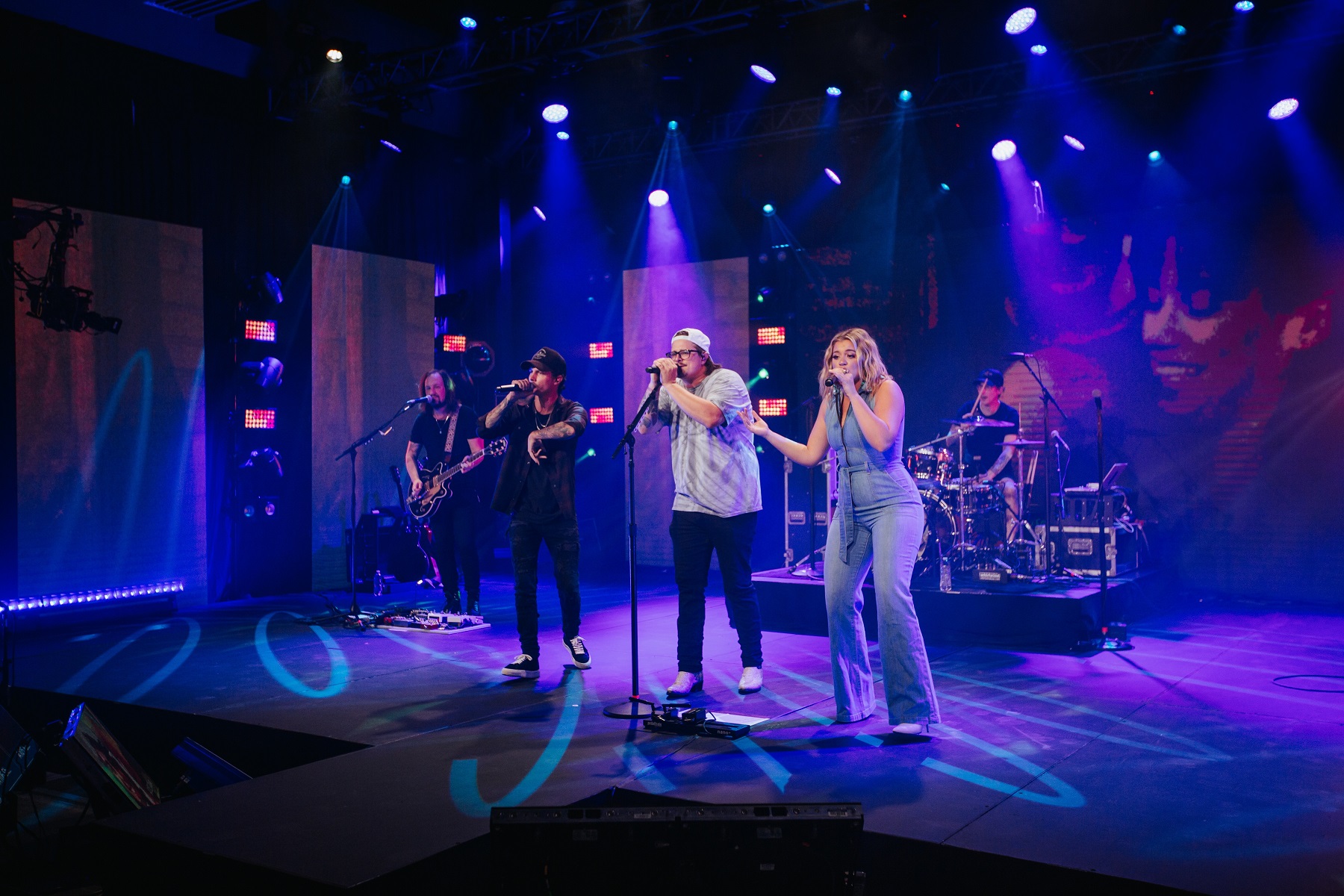 Elation/ADJ
The 36 ft. wide by 24 ft. deep space is bordered with video panels on three sides and is packed with lighting to get the texture and looks they wanted. Although the designer says there was still a lot of inventory tied up on shows when he first started talking with GENETIC about the design early in the year, he was still able to secure an impressive rig.

Fulfilling the role as the main profile fixture are 13 Artiste DaVinci™ LED moving heads, a fixture lighting director Koop says is perfect for the space. “It ticks all the boxes and gives us a lot of design options to make individual looks for each song. Like the rest of the Elation gear we use, it’s also LED so there’s no added heat.”

Ideal for classic narrow-beam concert looks, 24 narrow-beam DARTZ 360™ LED movers wrap the stage to work from all around the room. They also help fill any negative space when the space is used for studio clients. ACL Curtain™ LED battens serve a dual purpose, as traditional footlights for low light looks and for texture in camera shots from positions across the back edge and fronting risers. Filling holes with pixel effects or used to wash artists from sidelight positions are Chorus Line 16™ pixel bars while WW Profile™ LED ellipsoidals are used as Lekos for frontlight. Cuepix Blinder WW2s™ punch out white light effects when needed. Populating the rig from ADJ are Hex Panel IPs™ for background eye candy looks, as well as Encore FR150Z™ white light Fresnels. 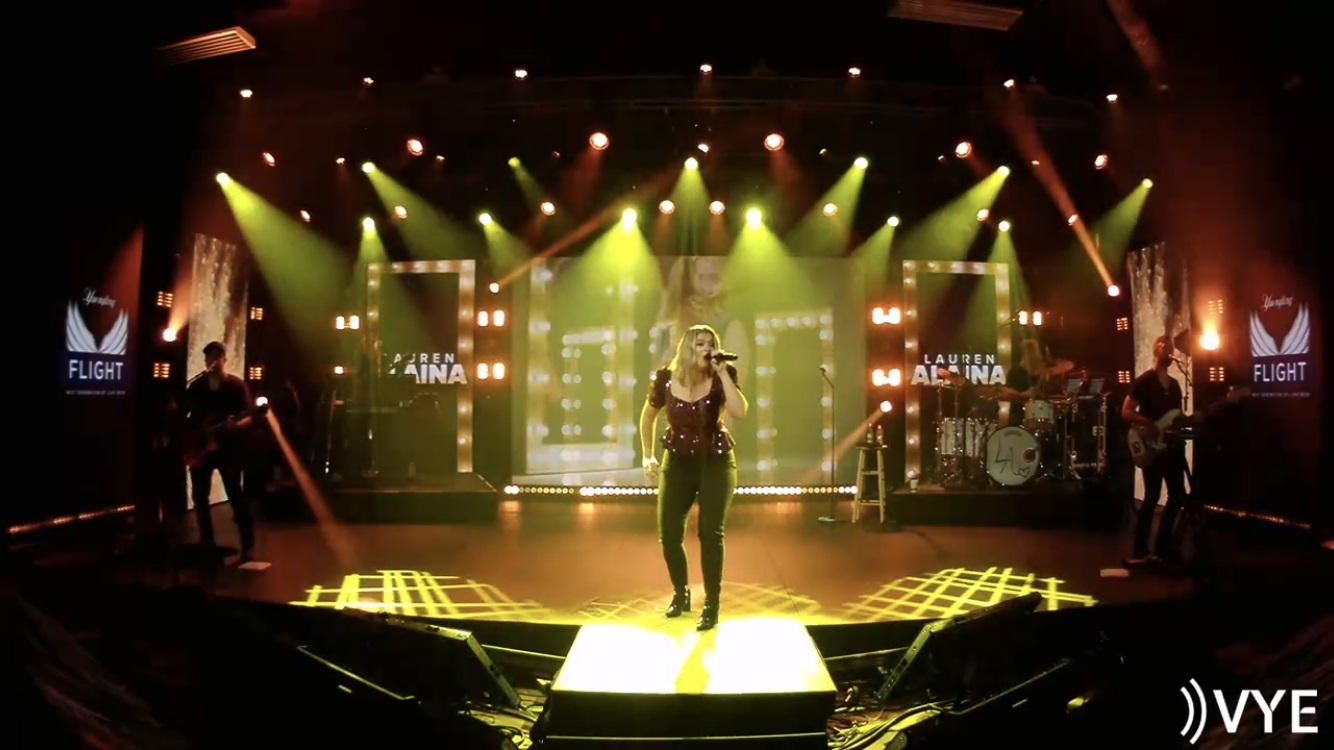 Virtual Live Audience
“What makes this even more special,” says Zacharias, “is Clair Global’s Virtual Live Audience technology that allows artists to interact with hundreds of their fans on video panels around the room. An artist can see the audience rather than just playing to a camera.” There can still be 1,000s streaming like a normal live stream and they can even arrange an interactive virtual meet-and-greet with fans before the show.

Surrounding the video panels out in the Virtual Live Audience are tiny ACL 360i™ single-beam movers used to give midair texture and just enough of a beam to make the look interesting from the artist’s perspective. “We’ve had several artists get emotional as they walk up on stage and can see, hear and feel the audience again,” Zacharias shares. “It’s been a fantastic experience and has allowed them to reconnect with their fans.” Clair’s Virtual Live Audience technology, which is used on television programs like “The Voice,” has changed the dynamic, he says. “It’s the closest you can come to a normal live show under pandemic restrictions.”

The lighting designer used Capture™ software to visualize his design, a lighting design package that he’s used exclusively for years. He comments, “I still think it’s the best value out there and the best visualizer I’ve used. I’d rather previz in that than any other one I’ve tried.” Regarded as easy-to-use with a fast learning curve, Capture allows users to virtually design the lighting, truss, stage and scenery in a 3D environment and can even incorporate video. 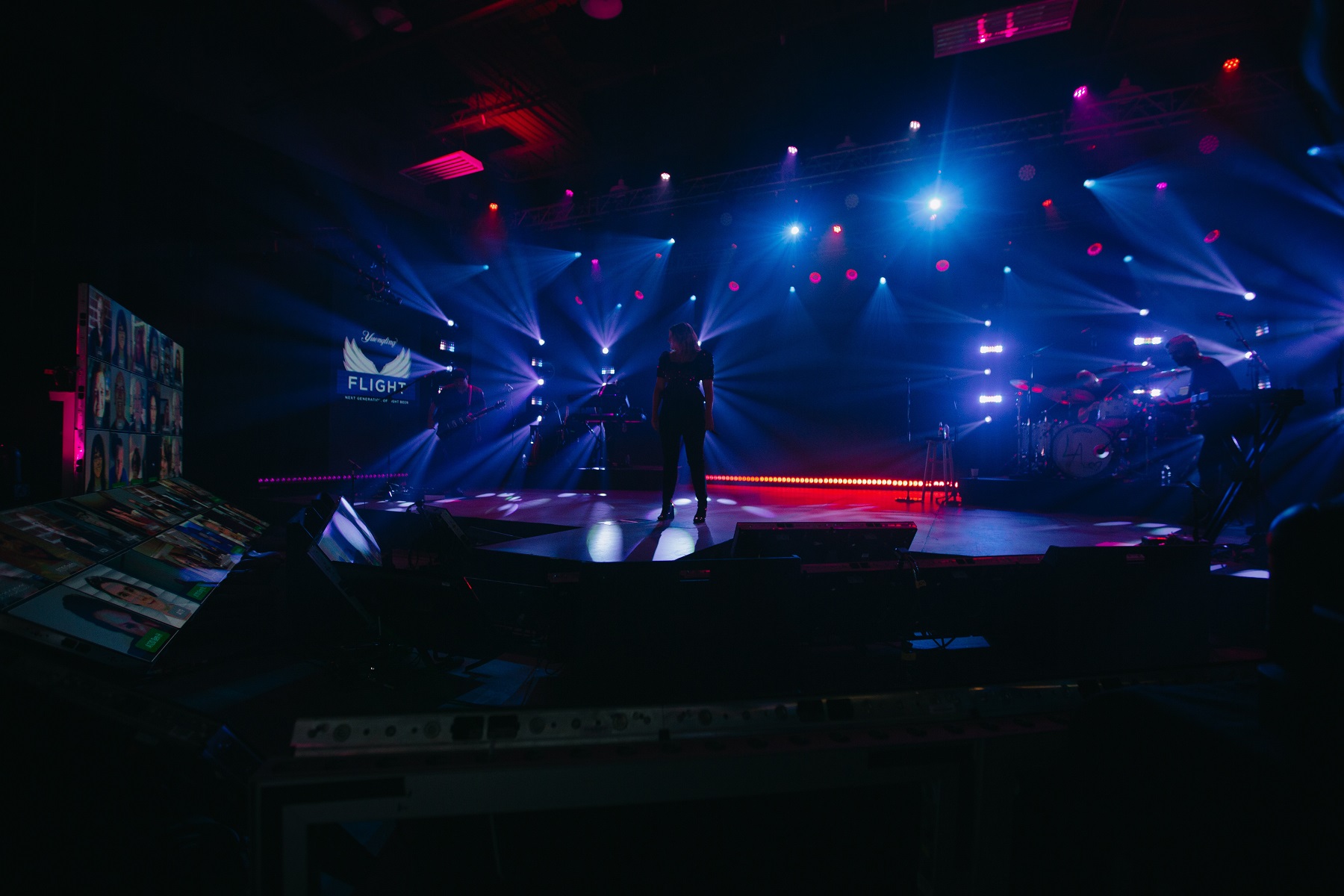 Team effort
The virtual livestream space at Clair Global in Nashville has been a success since airing its first performances this past summer with several artists performing like Lauren Alaina and Hardy. The space has also been used for other purposes like private artist/fan events and album launches.

“It’s been working because we have a really great team,” says Zacharias, adding that they’ve been able to pull together some people during this industry shutdown who otherwise might not have been available. One of those has been Darien Koop, who he has worked with on several projects in the past. After designing the space, Zacharias turned it over to Koop, a solid lighting designer in his own right. “He’s a friend and one of the best programmers I know of. He has a lot of broadcast experience so he really helped to get the levels right and make the live streaming look good. I trust his judgement and it allowed me to step back and focus on other things.”

VYE runs virtual livestream shows from another studio space in Nashville as well and sees the format as something that will remain popular even after the pandemic is over. Zacharias concludes, “We really believe that virtual shows will work alongside live touring shows in the future. The landscape is changing and I think there’s a long term place for it.” 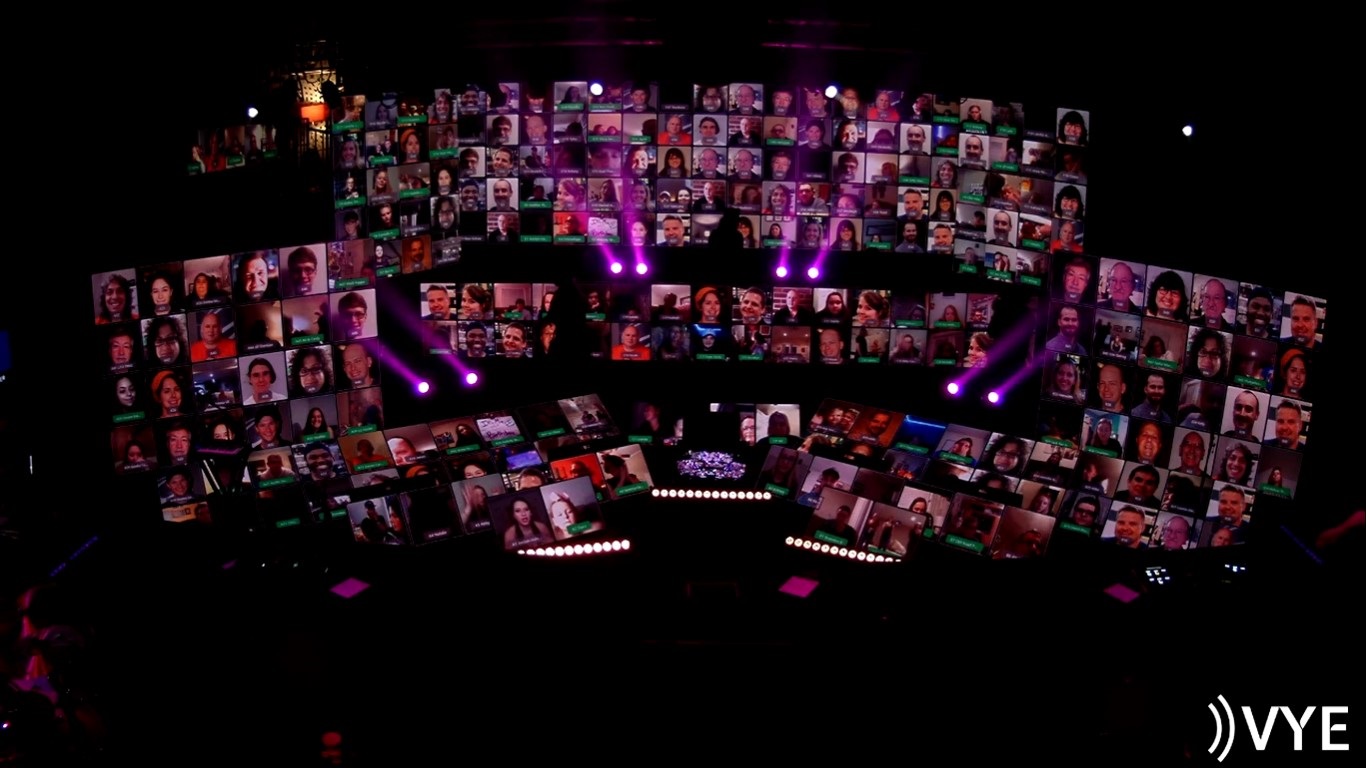