Home of the Emmy-winning PBS television series Bluegrass Underground, The Caverns is a naturally-occurring subterranean amphitheater at the base of the Cumberland Plateau in Tennessee’s Pelham valley. Having hosted performances from many of the biggest and fastest-rising names in music, its Big Mouth Cave annually draws more than 50,000 visitors to experience concerts in a truly unique setting with natural acoustics and otherworldly beauty. 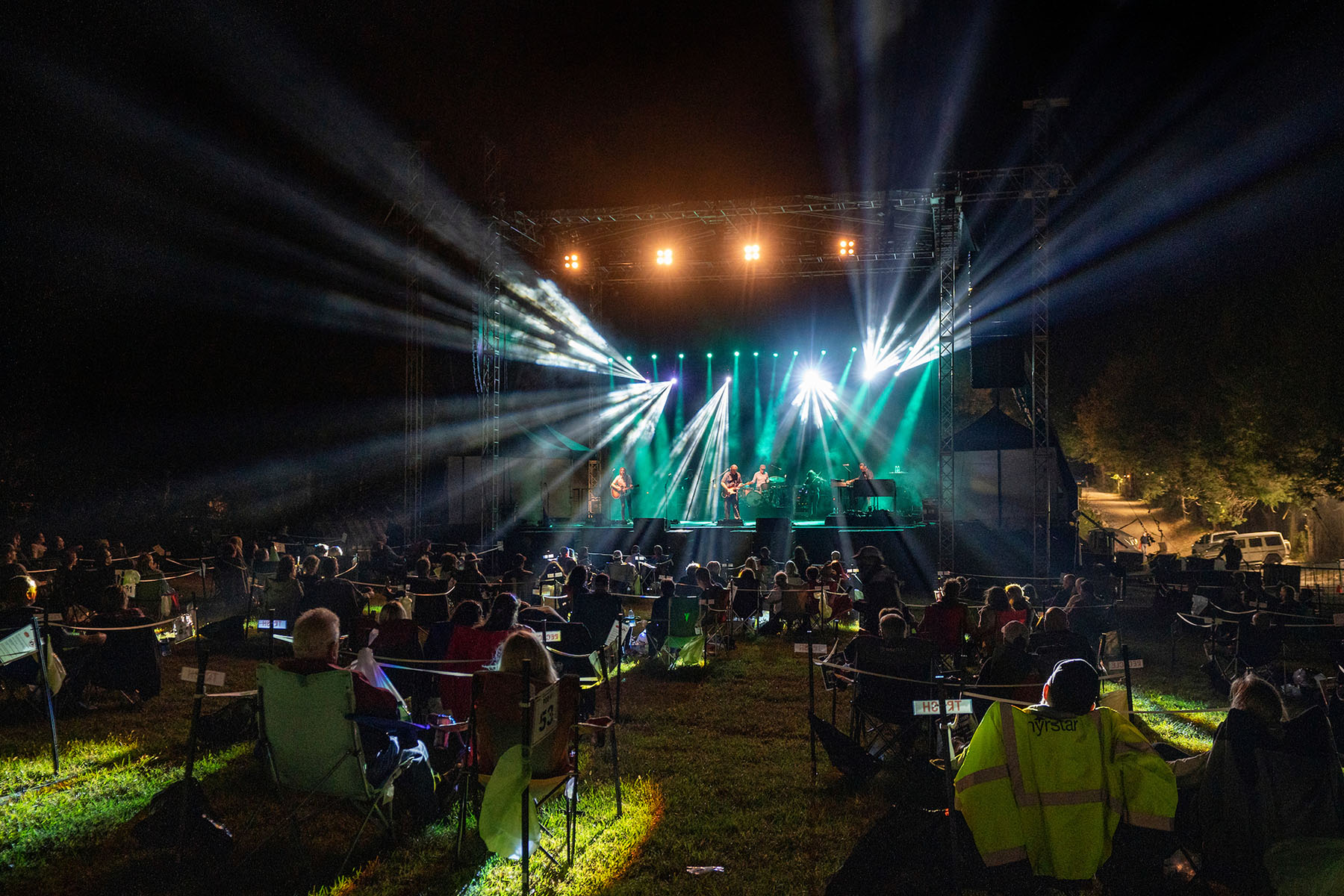 However, like all other music venues in 2020, even this prehistoric site had to close its “mouth” for the current pandemic. But that didn’t stop Jason Isbell and The 400 Unit from kicking off The Caverns’ new COVID-compliant “Above Ground Concert Series” with a four-night run of outdoor shows on the grounds above the cave with an L-Acoustics K1/K2 system deployed by Escondido, California-based Sound Image.

For ten years, Sound Image has been the primary audio provider for The Caverns and was brought in to supply the new Caverns Amphitheater—as the grassy hillside overlooking scenic Payne Cove is now known—with a sound reinforcement system for the four-time Grammy Award-winning artist’s shows, which ran from October 8 to 11.

In keeping with CDC and state guidance for large gatherings, audiences watched the gigs from socially distanced “pods”—roped off sections for two, four or six family members or friends—which were at least six feet from each other and 15 feet from the stage.

According to Sound Image system tech Chris Demonbreun, the main PA featured left and right hangs of four L-Acoustics K1 enclosures over five K2, with two Kudo cabinets positioned below as frontfills. Two additional ground-stacked K2 were deployed off stage right to address a few of the audience pods not covered by the main arrays. Four groups of three vertically-oriented SB28 subs, each set up in cardioid mode, “kept the low end off of the stage and did some delay steering to maintain smooth low-end coverage throughout the listening area,” he says. The entire system was powered by 15 LA8 amplified controllers located under the stage, driven with AES and analog fallback, while an L-Acoustics P1 processor at FOH provided system processing and control. 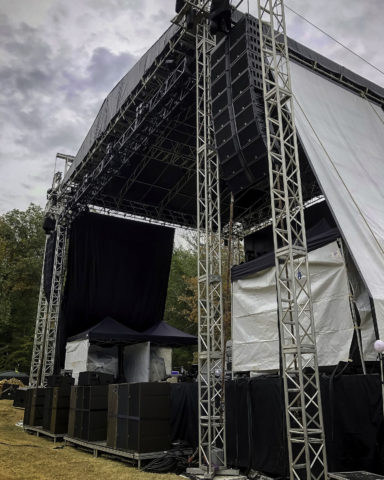 Demonbreun points to Danny Poland, production manager for The Caverns, as the final decision-maker to use L-Acoustics, “which is always a great idea, in my opinion,” he concurs. “With approximately 750 people each night spread out across the hillside seating, which is 200 feet wide and 400 feet deep, Danny knew that we would be able to get full audience coverage with K1/K2, and that it would sound great.”

Cain Hogsed, the band’s FOH engineer, agrees: “Although we typically use existing venue or local PA when touring, L-Acoustics is one of the more common systems we see, and I’m always thankful for it. I’ve enjoyed mixing on K2 and V-DOSC rigs in the past, so when I was told we were going to be on K2 for these shows, I knew we would have plenty of coverage and clarity, and we certainly did.”

With all four shows being outdoors, Hogsed notes that weather conditions are always a potential challenge. “Having to deal with wind and rain, my experience was different every night,” he says. “During the second and third shows, I was actually mixing under a tarp while Chris, my system tech, held visqueen over the console. Thankfully, even though the weather was highly unpredictable, the L-Acoustics PA was consistent and balanced.”

Aside from praising Hogsed for his “killer mix every night,” Demonbreun chalks up a good part of the system’s success to the resources found in Soundvision. “I believe that this system did better than other competitive PAs would have done thanks to the use of new L-Acoustics autosolver tools like Autofilter and Autoclimate,” he describes. “They allowed me to make sure that the people in the front didn’t get blasted with high end while still allowing those in the back to hear nice, clear, full-range audio. It sounded nearly the same everywhere, within 4dB from the front to the back, which is something that L-Acoustics makes it easy to do.” 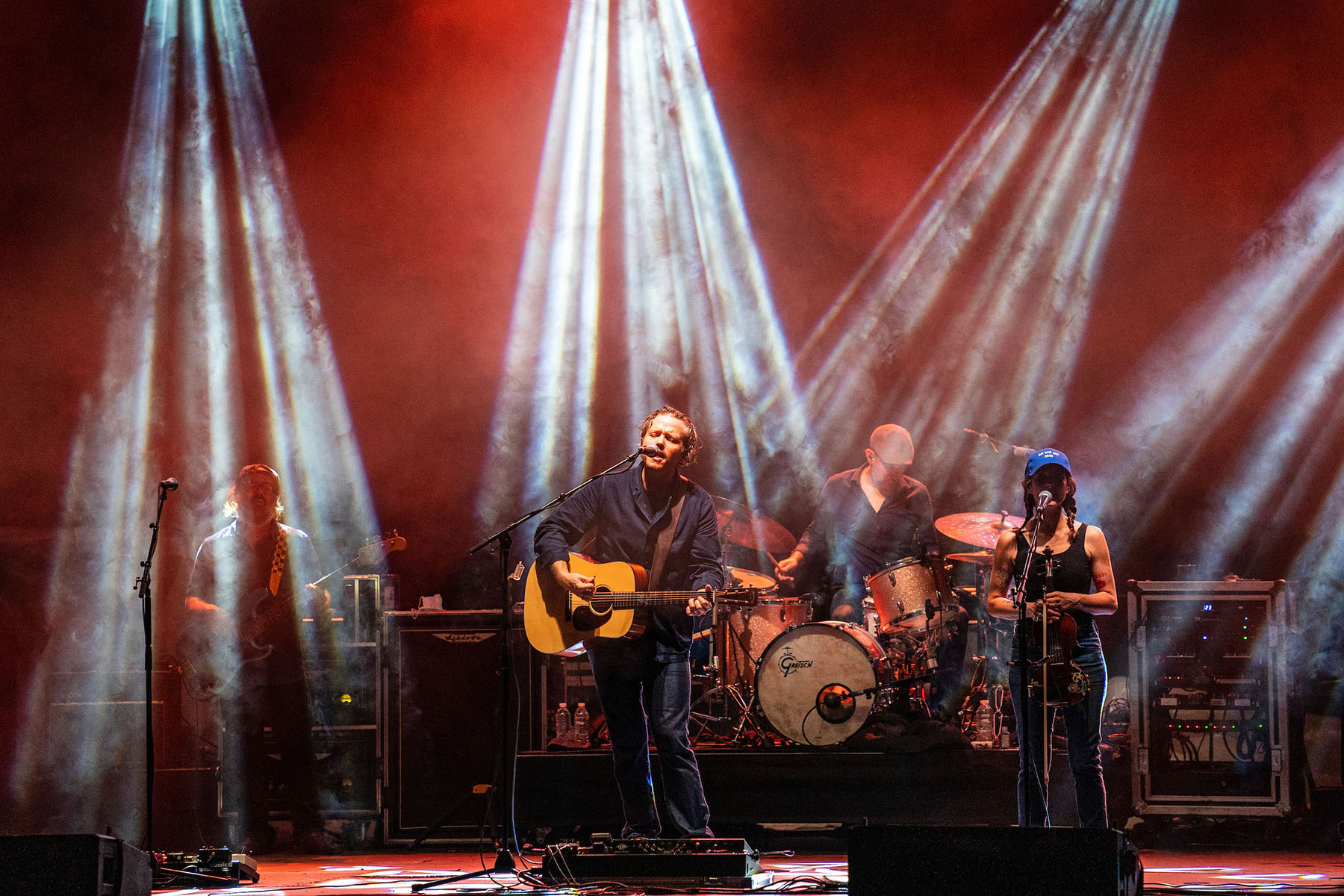 The Caverns’ general manager, Joe Lurgio, was duly impressed with the results as well. “Personally, I was told repeatedly by the artist team, who were both behind the scenes and in the audience, that they were blown away by the audio—especially for a brand-new venue,” he says. “Without having a dress rehearsal, we were nervous that we might have undersized the rig, but it sounded great from everywhere in the ‘house.’ The amphitheater is a natural bowl shape and allowed for the sound to hit everyone, and Sound Image really delivered with the right loudspeaker setup for these shows. We can’t wait to do more.”

Nashville Scene also chimed in on the audio with an article on the final show, which read: “Isbell’s voice was smooth, naturalistic and in fine form Sunday, never having to strain to be heard. For an outdoor space, everything sounded crisp and condensed. That was no small feat…”

One dollar from all ticket sales was donated to NIVA, the National Independent Venue Association, to benefit music venues currently closed because of the pandemic. Learn more about NIVA at SaveOurStages.com.