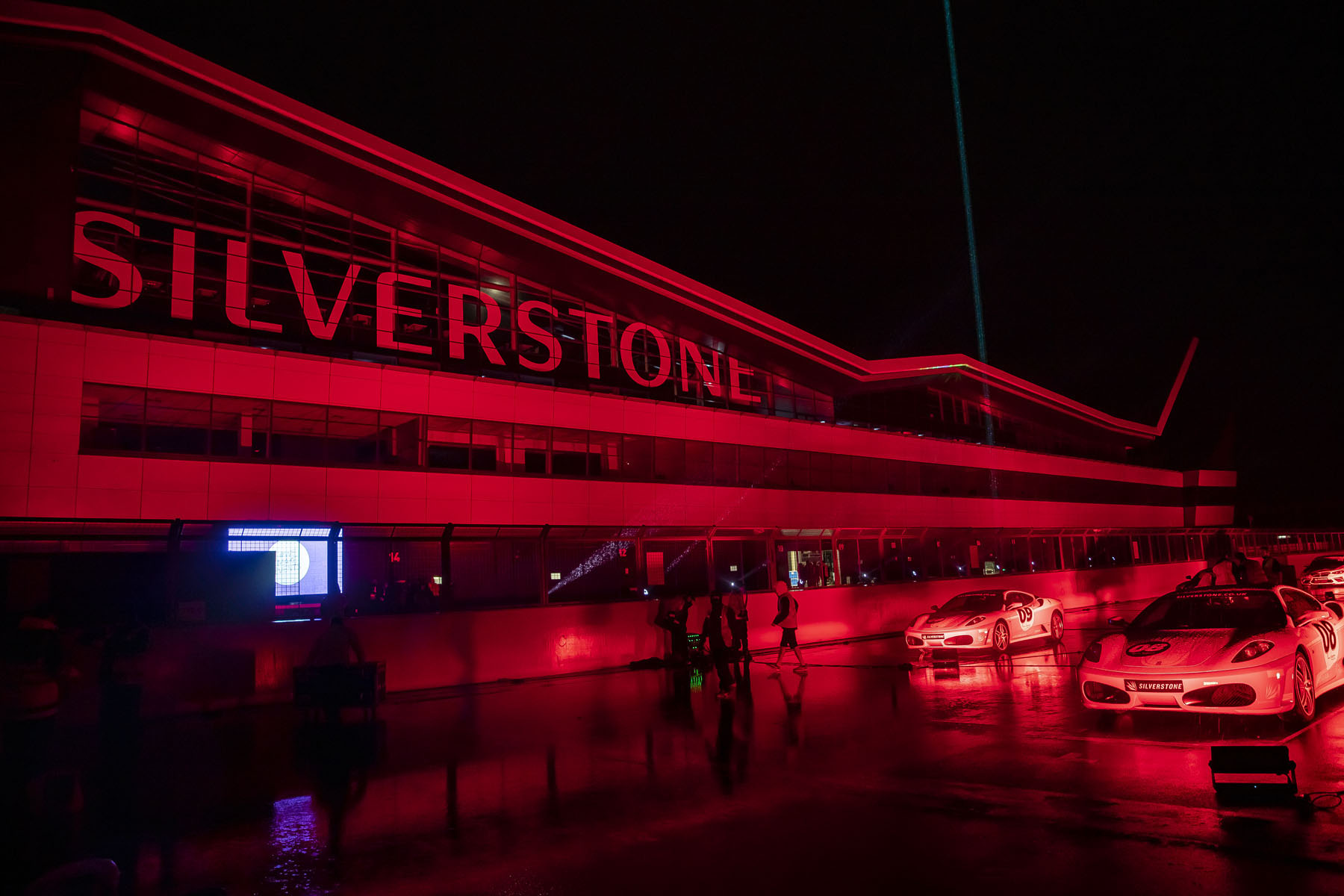 This massive effort was proudly in support the #WeMakeEvents Global Day of Action.

#LightItInRed, one of many elements making up this general technical production industry alliance, helped coordinate thousands of similar lighting interventions which took place across 25 countries and all continents … to highlight the urgent need for the global live events / entertainment industry to be allowed to safely get back to work.

Nearly 100 Robe moving lights supplied by Clearsound and Robe helped light two key locations at Silverstone – The Wing pit lane and paddock building, which resembles the wing of a race car with extensive event and conference facilities on the higher floors, and the BRDC (British Racing Drivers’ Club) Clubhouse which was a couple of kilometres away on a different part of this enormous site.

The Robe luminaires were combined with around 150 other lighting fixtures sourced from Clearsound, with additional fixtures from Dragonfly Lighting and CSR Lighting plus extra control from Antire Technical Productions, all contributing to the spectacle, together with the respective permanent lighting schemes of both buildings.

Robe and Clearsound were also joined on site by several other partner companies! 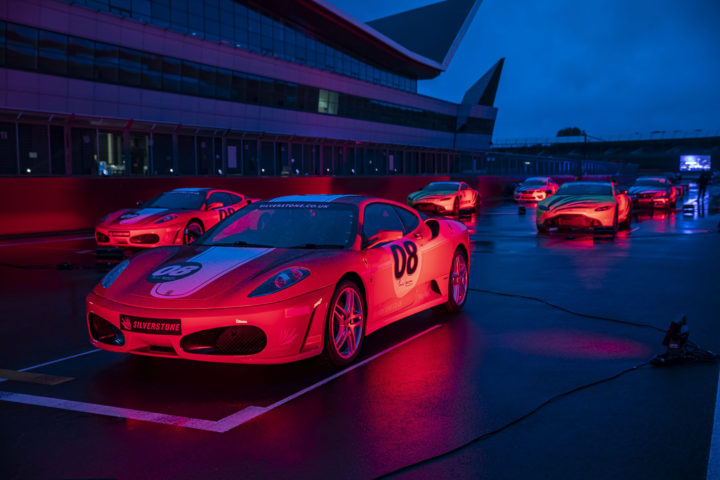 MLE Pyrotechnics rocked up with some super-bright lasers and also shot some great drone footage and The Flightcase Warehouse showcased a custom range of #WeMakeEvents flightcases while Frasershot Studios provided additional photography.

An ebullient technical crew of 22 – a mix of Clearsound regular freelancers and others who responded to a Facebook crew shout out – plus Robe UK’s Jordan Tinniswood and Simon Gooding were led by project manager Steven Haynes from Clearsound.

Steven and Phillip Berryman – also working as one of the technicians on site – are founders of the #LightItInRed movement.

On site, Steven and Robe’s head of marketing Theresa Gibson liaised with Silverstone Circuit’s technical manager Paul Goodall, PR / communications consultant Alison Hill and head of sales Hayley Smith to ensure things ran smoothly and the crew had all they needed to make the installations run seamlessly and look amazing.

Theresa Gibson commented, “Led by our very own team principle Steven Haynes from Clearsound Productions and the awesome crew who volunteered their services, the event was a testament to the sheer passion, drive and determination that these talented individuals have for an industry they all love and are desperately missing.

“The feeling of unity, togetherness and empowerment was really something else and not only did it help raise vital public awareness about this usually unseen industry, it brought people together and created some unique memories in the way that only this industry can! A heartfelt thanks to all of you that made this happen!”

For Robe and Clearsound, the Silverstone event was the continuation of a fantastic working relationship that started with the first #LightItInRed event on July 6th … with 10 installations around Northampton, and continued for the #WeMakeEvents day of action across the UK on 11th August, when the Magazine London event space and two other high profile sister venues in the city were lit red. 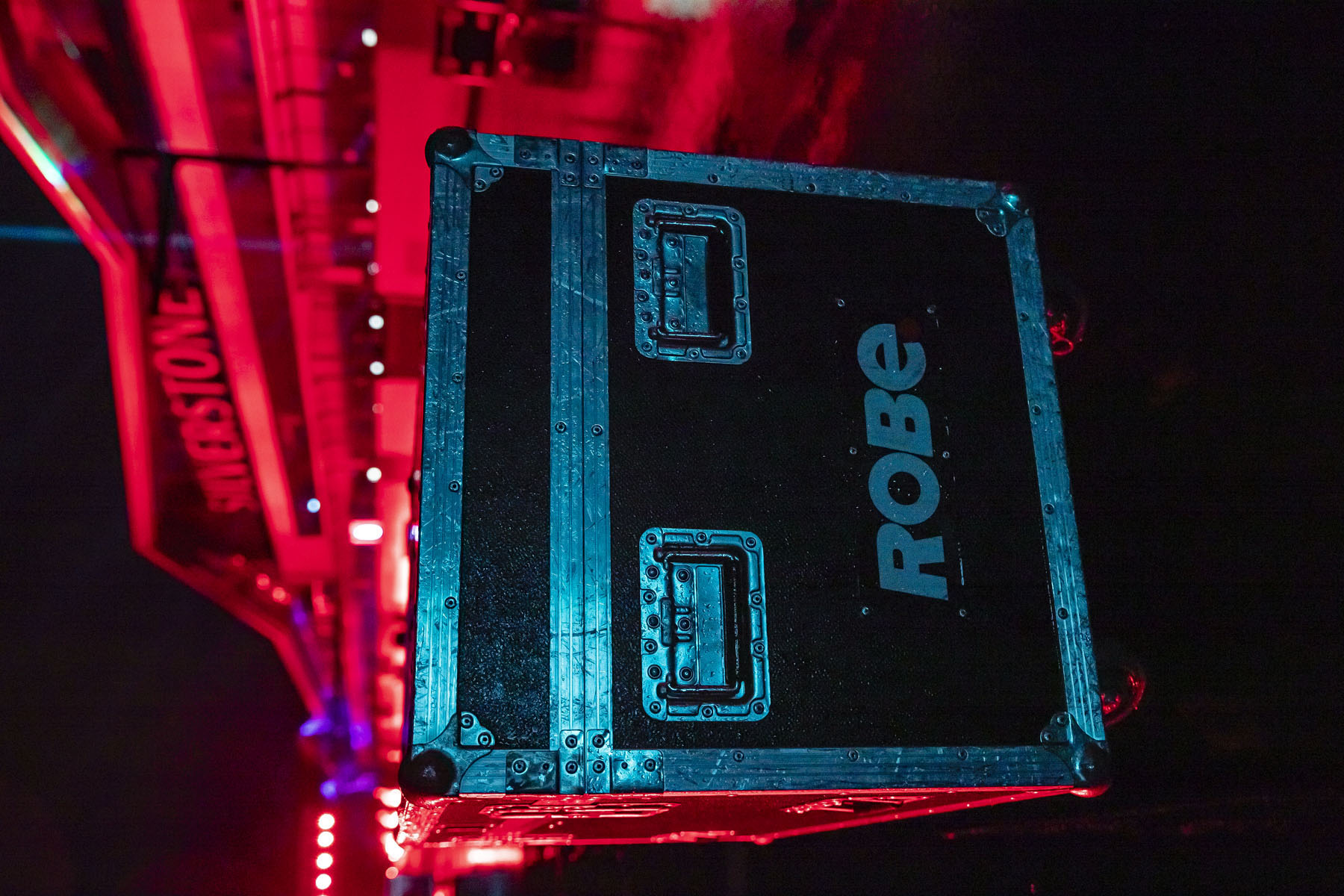 As parts of the Silverstone installation were initially planned to be outside and the weather started looking highly erratic a few days in advance, the final lighting plans stayed fluid right up until absolutely the last minute on the day!

This illustrated first-hand the brilliant solution finding savvy for which the industry is known as ideas flowed and decisions were taken quickly and incisively to ensure that the event was still delivered to the highest standards … despite truly abysmal weather!

Most of the Robe fixtures – a mix of Pointes, MegaPointes, Spiiders, Spikies and LEDBeam 150s – were located inside on Floors 3 and 4 of the Wing’s 360 metre length, blasting out through the glass into the cloudy, wet night skies.

The side of the building was lit red with waterproof LED floods deployed on the ground along its length, while additional beams of light blasted out from the pit garages below.

Flightcases and flightcase pushes have been another powerful form of industry campaigning during the last 6 months as numerous countries attempt to draw attention to the need for financial support from governments.

At the BRDC building, the lighting scheme for the night was designed by Ryan Murfet of Antire Technical Productions, who utilised a Robe MegaPointe, a Pointe and an ESPRITE to fire beams out from the top of the balcony, skimming the low clouds to be visible from all around the site. The balcony canopy roof and the atrium of the building were lit with LED PARs. 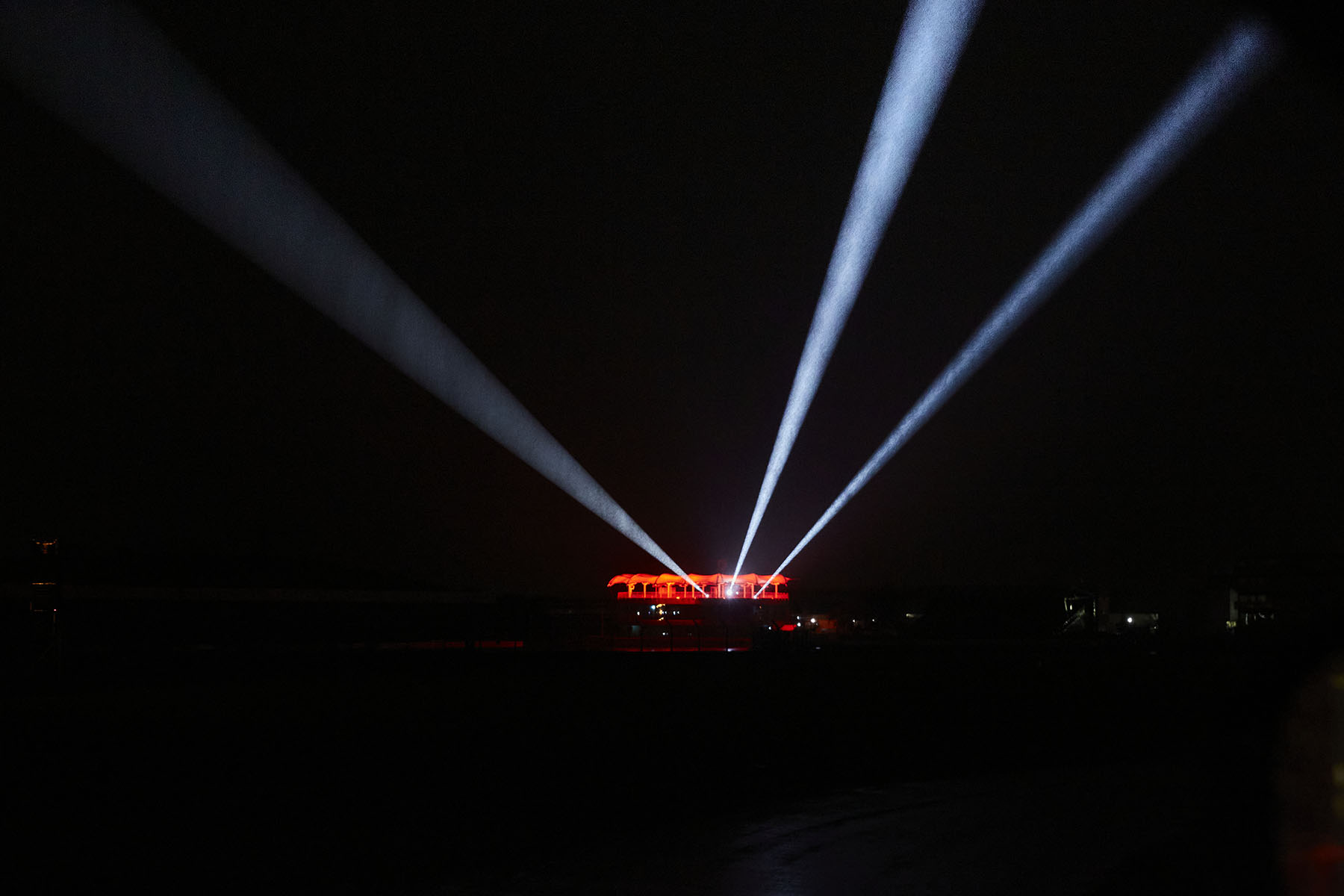 Steve comments, “It was another amazing #LightItInRed event uniting a fantastic crew who gave it lots of energy and weren’t the slightest bit fazed by the awful weather. I would like to say a massive thank you to all those involved both onsite and behind the scenes, we wouldn’t have been able to do this without you.

“It was a pleasure working with Silverstone’s team and being part of a unique global event representing this incredible industry and assisting #WeMakeEvents to hopefully get our collective voices of heard.”

As with the other events for #LightItInRed / #WeMakeEvents, the crew camaraderie on site and the feedback was amazing … with countless comments about how happy – indeed overjoyed – people were to be involved and feeling a sense of purpose again pushing flightcases, setting up and programming lights, running cables, etc.

At Silverstone, even some audio engineers risked being forever ribbed by the ‘noise community’ for getting involved with lighting, but were ecstatic to be doing so!

Tarqs Bridgwood of Northampton-based SoundSounds was one of them and just glad to be working on a gig / event and part of a crew again, engaged in banter and many laughs, “I would have been more at home rigging a dirty great big line array PA system … but this was fantastic!

“While the weather wasn’t kind, this was a real testament to the fact that we really DO make events happen. Whatever curved balls are thrown our way, we can deal with them with imagination and lateral thinking! I’ve lost count of all those I’ve done in the p***ing rain, wind, and other hostile elements over the years, and the show always happens!”

The human cost of the pandemic for individuals who have lost their livelihoods and the means to support themselves through previously profitable businesses in a hugely successful and dedicated industry that generates so much … cannot be underestimated!

Theresa sums up, “What the team achieved has been truly incredible. To have the opportunity to support the #WeMakeEvents global day of action at Silverstone Circuit as a prominent #LightItInRed illumination on the UK map was something very special. It was a great opportunity to collaborate with existing and new industry friends and colleagues who contributed their time, equipment and services free of charge, despite the plight and pain the industry is feeling across the sector!” 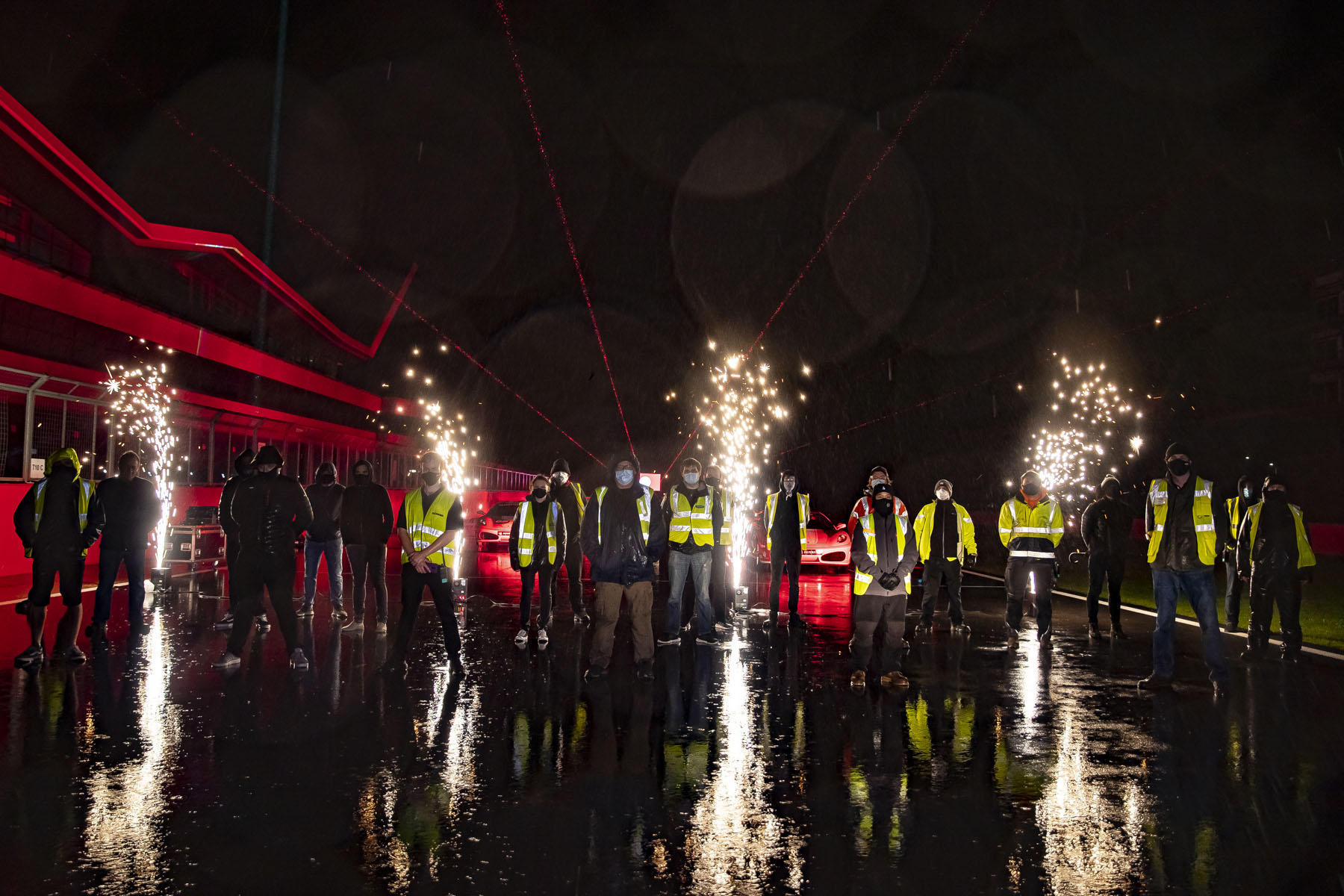 The two Silverstone installations were among 2,350 buildings, monument, landmarks, places and spaces that were lit up red worldwide – from New Zealand to Chile – in the largest coordinated production and live event industry action to date by #WeMakeEvents.

Since live performance and entertainment and its associated technical production and vast support infrastructure shut down in March, the lighting of buildings in ‘emergency red’ / ‘red alert’ colours has become synonymous with supporting a highly creative and invaluable industry in its calls for recognition and government support.

Over 30 million people in the 25 participating countries for this day of action would usually work in the events industry, but with social distancing and other Covid-19 measures and restrictions in place, there is no possibility of a financially viable return to work for the foreseeable future.