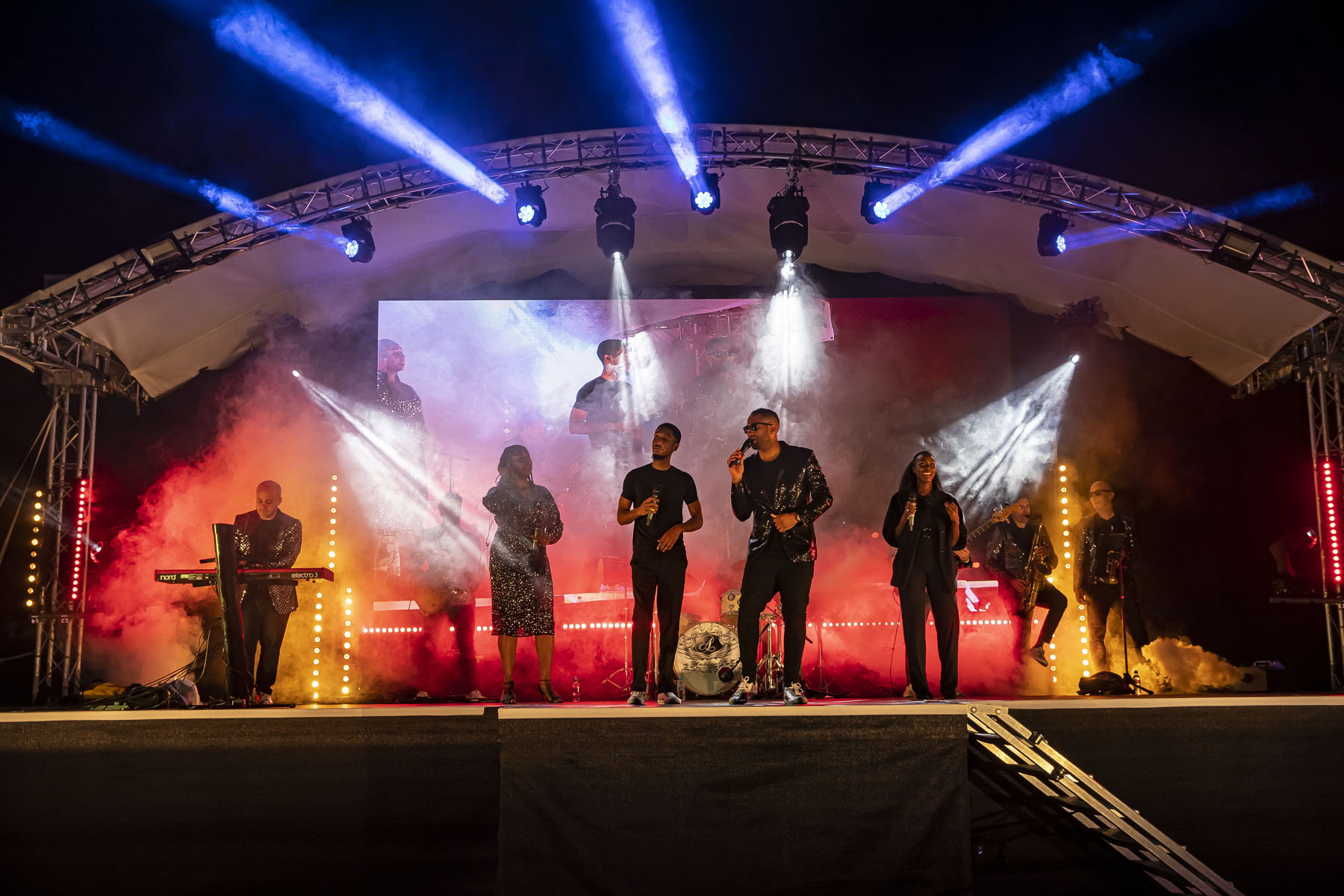 That didn’t just include a spirit-rousing performance and some superlative, funk, soul, dance and hi-hop from the Ambassadors Band, the ground-breaking season, a big leap of faith and some serious planning and investment by Philip French from Peachy Productions, was a resounding success.

Philip and his team supplied 95% of the technical production infrastructure for the six-week period including staging, lighting, video, and audio. The Playhouse show schedule ran for two 2-week sessions with a two-week break in-between, working alongside some carefully selected locally-based partners to provide the other elements including catering, generators, marquees, and toilets.

Robe moving lights were front and centre of the production rig – with 8 x Pointes and 12 x LEDBeam 150s prominent on the rig, pulled from Peachy Productions’ stock. When the company initially started and was investing in equipment, explained Philip, they chose a few key brands in all departments, and for moving lights, that was Robe.

“They are robust – definitely an asset in the English summer known for its erratic weather – great value for money, they have a good colour mix and the physical movement is very smooth,” he stated. “They also provide a lot of power and punch for the size.” 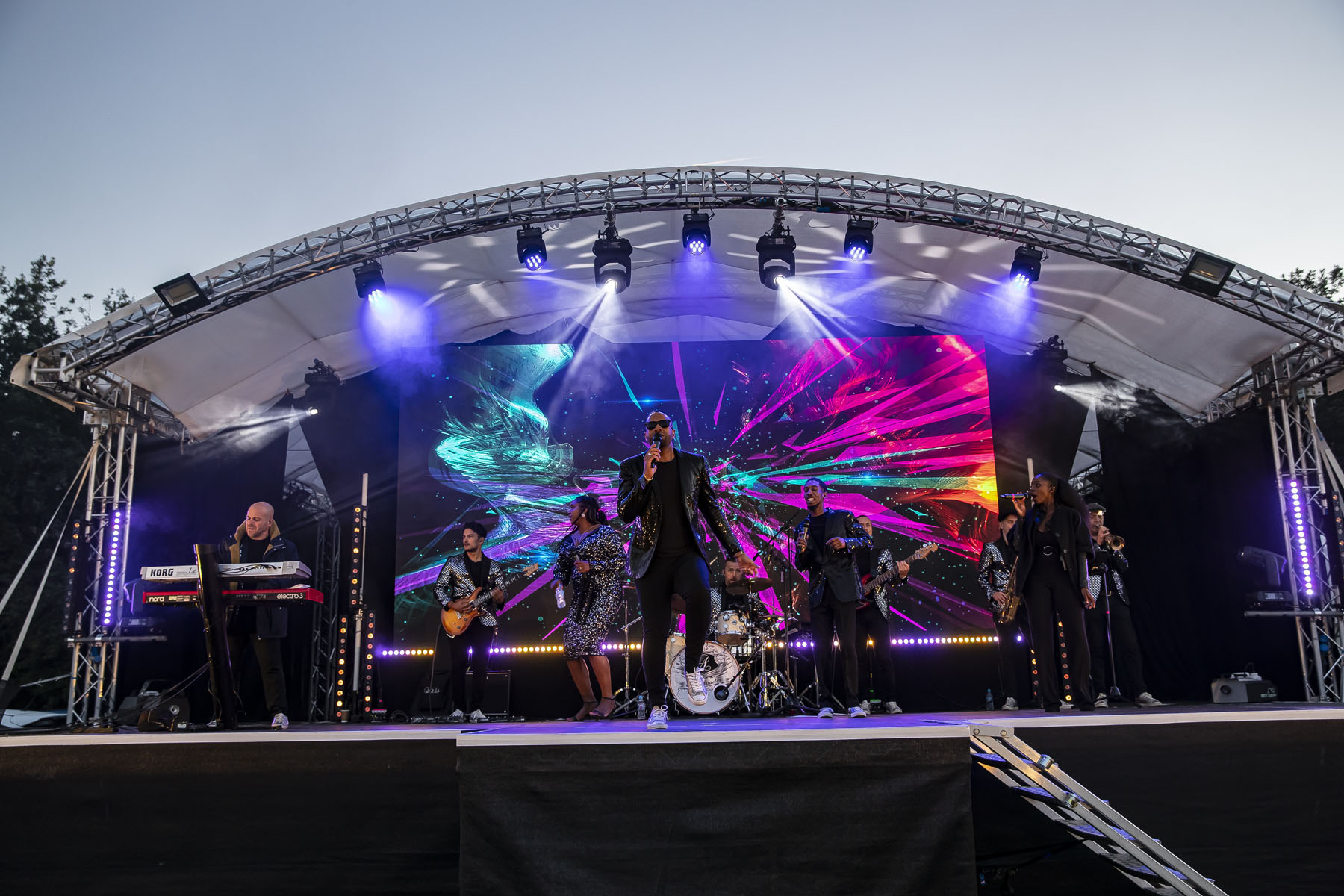 Size was important in the Peachy Playhouse context. As a flexible space for both cinema and live entertainment, they needed fixtures that blended in with the stage, kept the integrity of the sightlines … AND had a decent impact.

Philip feels that LEDBeam 150s are “perfect” with the zoom and focus which makes them a “very flexible light.”

The same attributes – power and small size – of the Pointes assisted in throwing the energy coming off the stage right into the audience standing by their cars in the now-famous Peachy picket-fenced bays, getting that all-important connection between performers and audience!

With Pointes rigged overhead and upstage sides and LEDBeam 150s on the front bars above the cantilever of the stage and on the deck in the downstage corners for low-level cross lighting, Peachy’s main lighting designer Jared Greenall had plenty of opportunities to get creative with lighting the assortment of artists.

For a multi-purpose scenario like this – from a single stand-up comedian on stage to covering the animated 10-piece line-up of the Ambassadors band who played four times over the period – these Robe fixtures were an ideal choice. They were also good for creating a general ambience for movie nights.

Much more than a drive-in, tucked away in a pastoral corner of the stunningly beautiful and secluded Loseley estate, Peachy Playhouse was inaugurated to deliver some fantastic entertainment and be a holistic morale booster in a green, tranquil setting for those emerging from lockdown isolation, an aftermath devoid of so many social experiences that were taken for granted pre Covid-19! 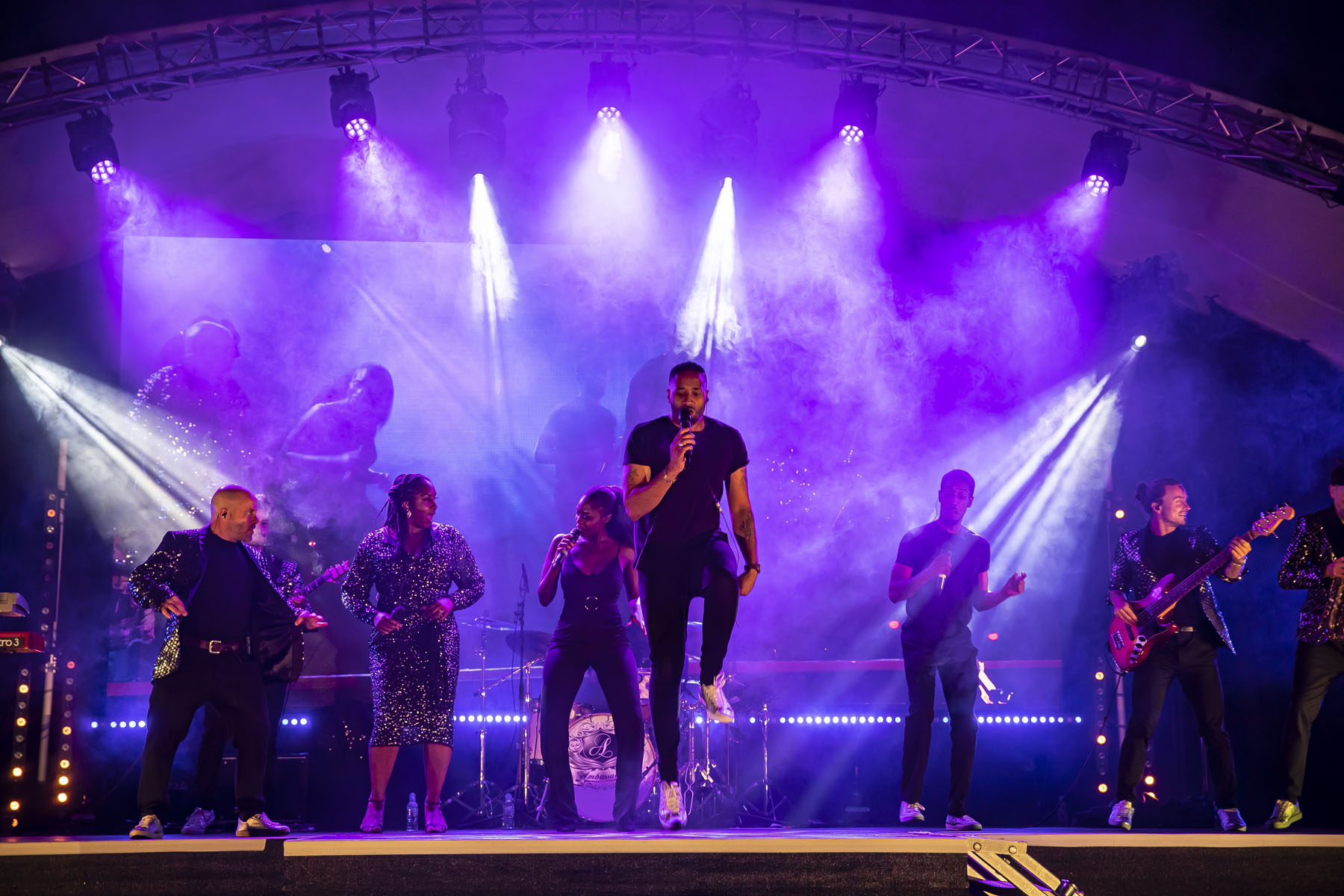 The site was adapted over the time as well with a socially distanced eating area added, complete with atmospheric festoon lighting, and a bar appeared for the second run of shows.

The event gave Philip a chance to bring back some of Peachy’s full-time staff from furlough and to employ some of their regular freelancers in doing what they loved best as well giving the array of artists, many of whom had not performed live since March, a chance to tread the boards once more!

“There is an energy and an engagement between performers and guests in live entertainment that – for all the great streaming events happening – you simply can get from being behind a computer screen,” says Phil.

There’s been a steep learning curve and numerous challenges involved in running this first season of Peachy Playhouse.

Dealing with all the new Covid-related rules and regulations and health and safety related practices has topped the list, and the second challenge was bringing people to the space. 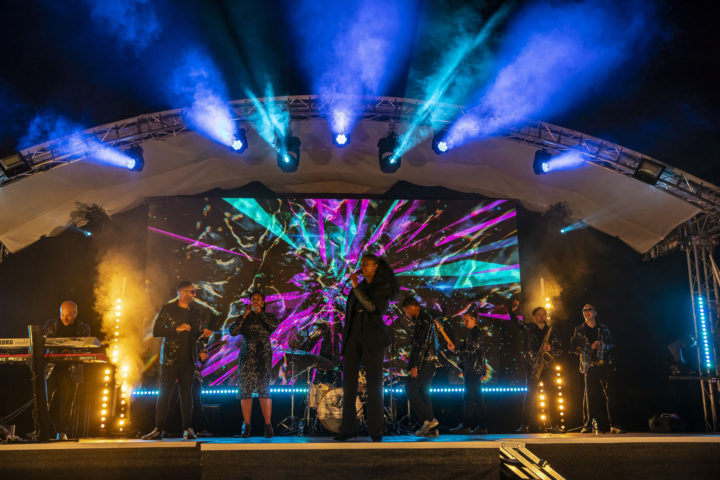 “Having been in lockdown for some months we discovered that people were not putting as much emphasis on names on the bill, but more on the ‘overall experience’, which we set out to make as fun as possible and deliver it safely and enjoyably for all,” he states, adding that seeing everyone’s smiles and hearing their laughter has made all the risk, hard work and sleepless nights “completely worthwhile – there have been so many magic moments!”

The commitment needed to start a new venture like this at an extraordinary moment in time has galvanised Philip, who is brimming with new ideas – and new contacts made – that are promising to bring other enterprises to fruition between now and the end of the year.

So … watch this space!