Entertainment design specialist Painting with Light (PWL) created and supplied a spectacular lighting and video design plus lighting control including programming and operating, together with bespoke integration of lighting / control for the sacred wheel itself … for the 2020 Belgian edition of ‘Het Rad’ (Wheel of Fortune). PWL worked in conjunction with its Genk C-Mine neighbour Deusjevoo, who designed and delivered the set. 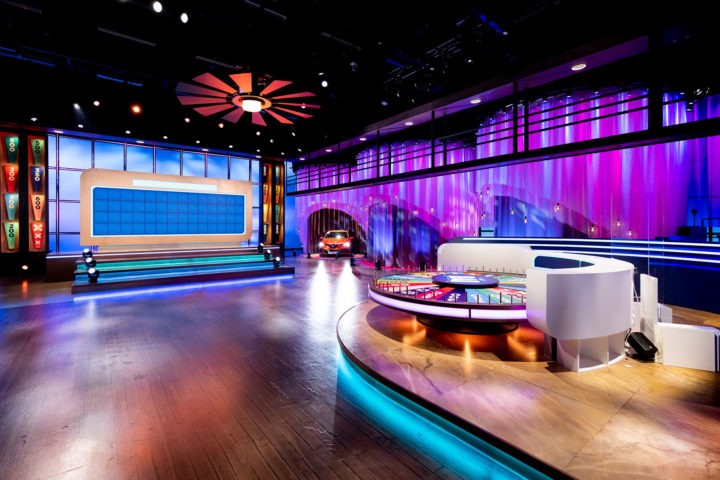 The series was recorded in Studio 1 at Videohouse in Vilvoorde and aired on SBS’s VIER channel. PWL’s creative director Luc Peumans produced the lighting and video design and worked closely with Dries Hermans of Deusjevoo on the set design, the latter involving substantial quantities of inbuilt practical lighting. These custom LED set elements were all painstakingly installed by the PWL team working in close conjunction with Deusjevoo … a complex and diligent job that paid off with vibrant, eye-catching results!

Céline Cuypers designed and engineered a special wheel lighting and audio trigger control.
Luc and Dries took a brief from the show’s creative director Lieven van Overbeke in terms of the aesthetic required, some of which related to the classic Wheel of Fortune style book which has been adapted and contemporised over the years since first launching in the US back in 1975!

Contestants compete to solve word puzzles and win cash and prizes and at the centre of the action is a massive – in this case 3-metre diameter – carnival wheel that contestants spin throughout the game to determine their cash and / or prizes.
Wheel of Fortune has been running in Belgium for some time in the past but this was the first season produced by SBS who wanted a fresh and distinctive look with an “elegant and classy” slant as well as an intimate ‘homey’ feel, so the design strategy had to be multifunctional and based on this.

Luc took “a theatrical approach” to this project creating a series of pleasing visual ‘big pictures’ that stood out on their own whilst encompassing the overall cosiness that was desired. The set included a long gantry level walkway along one side of the studio. The signature LED puzzle board at the heart of the action was flanked by a set of stairs and of course, the wheel was another vital visual focal point. The contestants sat on banquette seating around the wheel, with a socially distanced audience behind. Off to one side below the gantry were three circular shop areas – which contained plinths displaying the potential prizes.

These shops were each defined with three swirling curtains – a silk and two transparent voiles – chosen to absorb and reflect light. As with the other areas, Luc took a ‘layered’ approach so several different lighting treatments could be applied additively or separately. To accentuate a sense of refinement, the set was edged in pixel controllable LED lighting in key places including the stairs, the banquette seating behind the contestants, and the wheel. This was DiGiStrip product from InventDesign in the Netherlands – a regular PWL collaborator for one-off and special projects – chosen as a robust and effective solution, running wirelessly via a proprietary C4 controller, and triggered by the main grandMA2 lighting console.

The wheel was also built by Deusjevoo and packed with several RGB and white LED light sources! Céline devised a laser proximity sensor system that connected the wheel’s 72 handles (used by the contestants as they manually spun it) to MIDI notes that triggered cues on the lighting and audio consoles firing up multiple and different visual and / or audio effects completely harmoniously each time it moved.

The wheel lighting effects varied according to speed and position and worked brilliantly to ramp up the excitement in the studio at crucial moments. The data gathered from this operation allowed an analysis of how much the wheel was spun per episode.
One hundred and sixty-five Chauvet EPIX Strips were specified – 75 deployed on an impressive matrix grid effect behind the LED wall / puzzle-board – with the other 90 utilised inside the three shop areas behind the prize podiums.

Luc utilised ADB ALC4 LED cyc lights on the floor shooting up the cyc at the back of shot, with a quantity of COLORDash LED battens that grazed up the translucent gauze drape in front of the cyc, adding texture and depth.

A quantity of the house PAR 64s were also used, some for working light and some for the cyc, with more COLORado LED PARs and panels to pick out the various set elements and make them pop put when needed.

Overhead the general stage and studio lighting included Chauvet Maverick MK2 and MK3 profiles, Rogue R2 washes, plus Ovation E-910C ellipsoidals fitted with 15/30 and 25/50 lenses which took care of the primary key lighting. The Mavericks were also used for gobo projections onto the floor, the cyc and onto the drapes surrounding the shops, adding a subtle fluidity.
Around 150 x Briteq pin spots lit the triple-layered curving cloths which were also height graduated masking off the shops / prize areas in cylindrical columns. The pin spots were focussed on the cloths and the prize podiums themselves, selected for their small size, brightness and handy 10-degree beam angles.

The soft goods were delivered by ShowTex and specified by PWL and Deusjevoo. Dotted across the studio for quirky contemporary back-of-shot eye-candy were 78 x Lucenti Pearl LED caged bulbs on long wires, fully DMX controlled, which produced a fabulous warm glowing tungsteny grading to the whole environment. The units have an RGB LED ring which enables the glowing filaments to be changed up with a bit of colour and funkiness.

Luc picked 62 x Robe LEDBeam 150s dotted around as eye / camera embellishment on the floor of the stairs and for back light behind the puzzle-board, also deployed on the floor to up-light the shop fabric columns. Other special effects lights included 16 x Robe Halo LED rings, used as a special on the underside of the gantry, a striking scenic element linked to the spinning of the wheel.

Lighting was programmed and operated by Werner Dries. In total, they were running 66 universes of DMX over Art-Net into the grandMA for set and studio lighting, which was a lot for a quiz games show.

Luc and the production were extremely pleased with the results and the colourful and lively look of the show which was imagined and realised in only 6 weeks!

One of the major challenges was amassing all the equipment and particularly the scenic and custom assets during this difficult coronavirus period with stages of the lockdown still ongoing and so many companies having furloughed employees and running part-time with a ‘skeleton’ staff.

All the stage lighting equipment was supplied by Splendit. The puzzle-board video screen was sourced by Vidisquare.