In March and April 2020, German TV network ProSieben broadcast the second season of the TV show “The Masked Singer” (TMS), in which celebrities compete against one another with vocal performances, clad in imaginative full-body costumes. Whoever receives the fewest votes per show must remove the mask and disclose their identity. In the meantime, the jurors, Ruth Moschner and Rea Garvey, along with a guest judge each week, speculate over the course of six live shows as to the identity of who might be hiding behind the masks.

Lighting designer Arkin Atacan from atacan design turned to various lighting solutions from GLP to ensure that the lovingly designed costumes, comprising dragons, sloths, robots etc,. appeared to optimal effect on the television screen. Arkin, who mainly specialises in the TV sector—including “Pussy Terror TV”, “ProSieben Winter Games”, “AlleGegenEinen (“All Against One”) and many more—has been in charge of the Endemol Shine production since the first season last year.

The stage concept by Florian Wieder was key to his lighting design. “The set includes many straight lines and polygons,” explains Arkin. “Wherever possible, I try to continue these design lines so that both the set and lighting function as a coherent unit, which in turn makes the overall picture look much more homogeneous and larger.”

The set itself consists of two eight-meter-high masks covered with fabric, the mouths of which are fitted with linear LED elements, which serve as an entrance tunnel. Added to this are a12-meter-wide LED back wall, a stage in the form of a double rhombus with a 5×5-metre LED floor, the public stands and the rate panel. 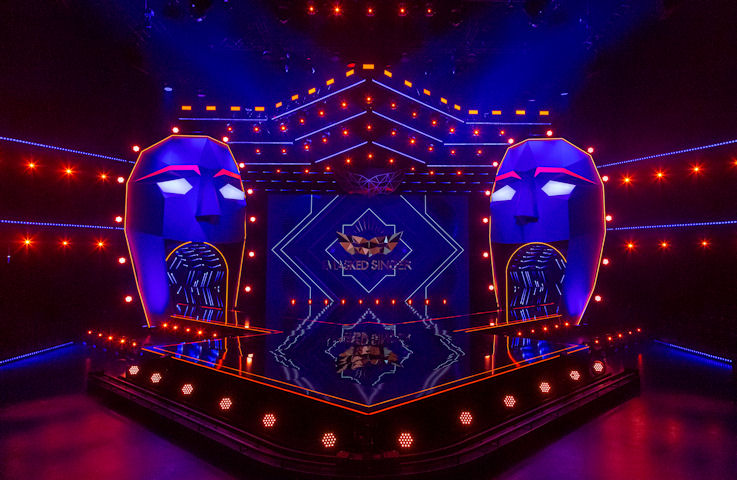 The lighting design remains largely unchanged from show to show, with only a few fixtures partially replaced. With a view to such important issues as energy efficiency and sustainability, greater emphasis was placed on LED-based solutions … which is why 76 GLP impression X4L, 66 X4, 60 X4 Bar 20 as well as nine KNV Line and 22 KNV Dot were used. In addition, 12 of the brand new JDC Line from GLP made their TV debut on TMS.

In addition to colour illumination of the masks, the impression X4L also serves as backlighting for the public, while the X4 Bar 20s follow the truss lines and reflect the basic design. “For me, the GLP X4 series has become a real all-purpose weapon,” says Arkin. “I have been using these products for a long time. Not only are they very reliable, they are also very versatile. I don’t know of any service provider who doesn’t have something from the X4 range in stock. ”

The modular KNV systems from GLP, which Arkin had already used at the Hapag-Lloyd inauguration in 2019, are new to the lighting design. Afterwards it was clear to him that he also wanted to integrate these products into the design for TMS.

“The KNVs are nice, small hybrid solutions to hide stroboscopes in a set. The size of the units is extremely small, making their impact all the more effective,”says Arkin.

However, Arkin’s highlight was deployment of 12 of the brand new GLP JDC Line fixtures, which celebrated their TV premiere at TMS. “I knew that GLP was working on a JDC line and I already had some information about the fixture in 2019, but I didn’t know when the launch would be. I was all the more pleased when I received a call from GLP Key Account Manager Olli Schwendke, who said that the first 14 pieces of this series were now available. I didn’t hesitate for long and requested12 demo models for the season finale.” 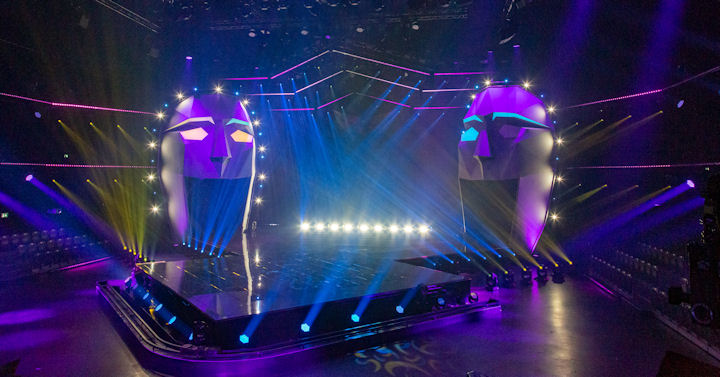 JDC Line is a new hybrid strobe based on the successful GLP JDC1. The linear light effect combines the extreme brightness familiar from the JDC1 with an LED pixel mapping stick. Two independently controllable RGB LED elements frame a central line of ultra-bright, white LEDs. The JDC Line owes its distinctive look to the fact that all LEDs are installed behind the same optics.

Arkin placed these new arrivals between the KNV Lines as well as to the left and right of the masks that shaped the set. “The effect was sensational! It was not only that the Lines sit extremely flat on the floor and have a massive strobe, but the two RGB lines above and below the strobe also allowed for very nice effects. I am convinced that these devices will now find their way into my tenders more often,” states the designer.

In addition to the lighting design, atacan design was also responsible for the entire operation of these productions. Arkin Atacan’s team worked closely with the choreographers, vocal coaches and content producers.