Taking place at the beginning of each year, the Super Bowl is the culmination of the American NFL season, drawing hundreds of millions of viewers worldwide. This year, the championship was hosted at the Hard Rock Stadium in Miami Gardens, Florida. System design consultant Lumen & Forge was chosen by Broadwell Airdomes USA, on behalf of show organiser AG Entertainment, to help create an unforgettable experience for the over 60,000 people in attendance. With the assistance of German projection specialist VIOSO, Lumen & Forge installed an immense dome measuring 68.58m wide by 53m high (225ft by 175ft), making it the largest projection ever made inside this kind of structure. 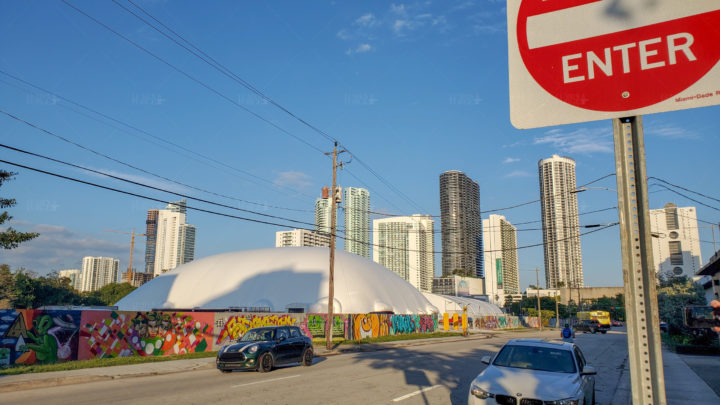 While many industry standard projection domes have a hemispherical shape, the one implemented for this project boasted a uniquely oval, or ‘pill’, shape. Created by Broadwell Airdomes USA, the colossal size of structure was decided due to the use of the dome, which would host concerts and parties within: The pill shape would also allow for a higher capacity of visitors, while creating optimal placement for the 24 Digital Projection M-Vision Laser 18K projectors installed inside, in order to project the content on the inside without any interference or view restriction.

While advantageous from a capacity perspective, the unique shape had major bearings on both camera calibration and content creation. To combat this, projection specialist VIOSO was asked to provide a highly advanced calibration rack, which included Lumen & Forge’s own VIOSO Domemaster server, six Datapath Fx4 display controllers, as well as a 7m-high tripod for the calibration camera.

“While Domemaster is the most common format for traditional 180° and 360° video creation realms, this dome was out of that specification because of its pill shape,” explained Misha Fradin, managing partner at Lumen & Forge. “The content created in that format would have been distorted when projected, and it would have ruined the experience for visitors.” 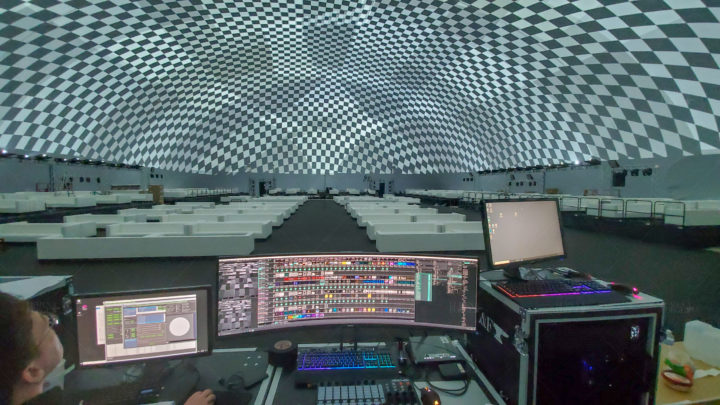 After designing the dome in a 3D space, the teams were able to develop content that was placed into VR for testing. Using this method, the 16×9 content was modified to perfectly fit the shape of the dome, altering the calibrations to fit the lens of the camera.

“We couldn’t just elongate the image to create an oval, as that would have put too much stress on the sides and the content would have appeared warped,” Fradin added. “Typically, the hemispherical dome shape is perfectly fit to the shape of the camera lens. But, since there is no such thing as an oval shaped lens, we had to make the view work for us. The calibration achieved by VIOSO was performed live from the view of the circular lens, and in order to fit the oval shape of the dome, we used the map from the 3D rendering of the dome. This hybrid combination of real and virtual made it possible to achieve a perfect image.”

VIOSO has used its Domemaster server in the past for both the calibration and playback inside a dome. Since this installation was used for concerts and events, traditional media and videos wouldn’t have sufficed. Instead, the Lumen & Forge Domemaster server was used with VIOSO’s Blackbox software to perform the calibration. Playback was then fed by a separate server and captured by the Domemaster with two 4K inputs, before being mapped inside the dome. 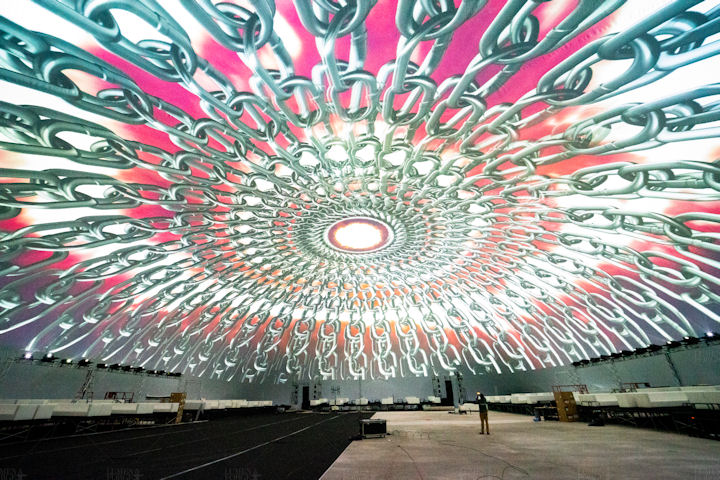 The teams only had two months to design the projection study and specify the technical aspects, and by the set up time in late January, the construction of the dome was already ongoing and time was not on the team’s side. This meant that the team’s first opportunity to operate the calibration was a mere three days before opening. It could also only take place at night, as the field operations team was still completing the dome’s construction.

“Every evening, the dome was about one or two metres larger, making our calibration from the previous evening unusable,” said Kevin A. Zevchik, director VIOSO America. “We were there every night right up until the opening night, calibrating and altering the projection as it was getting built.” 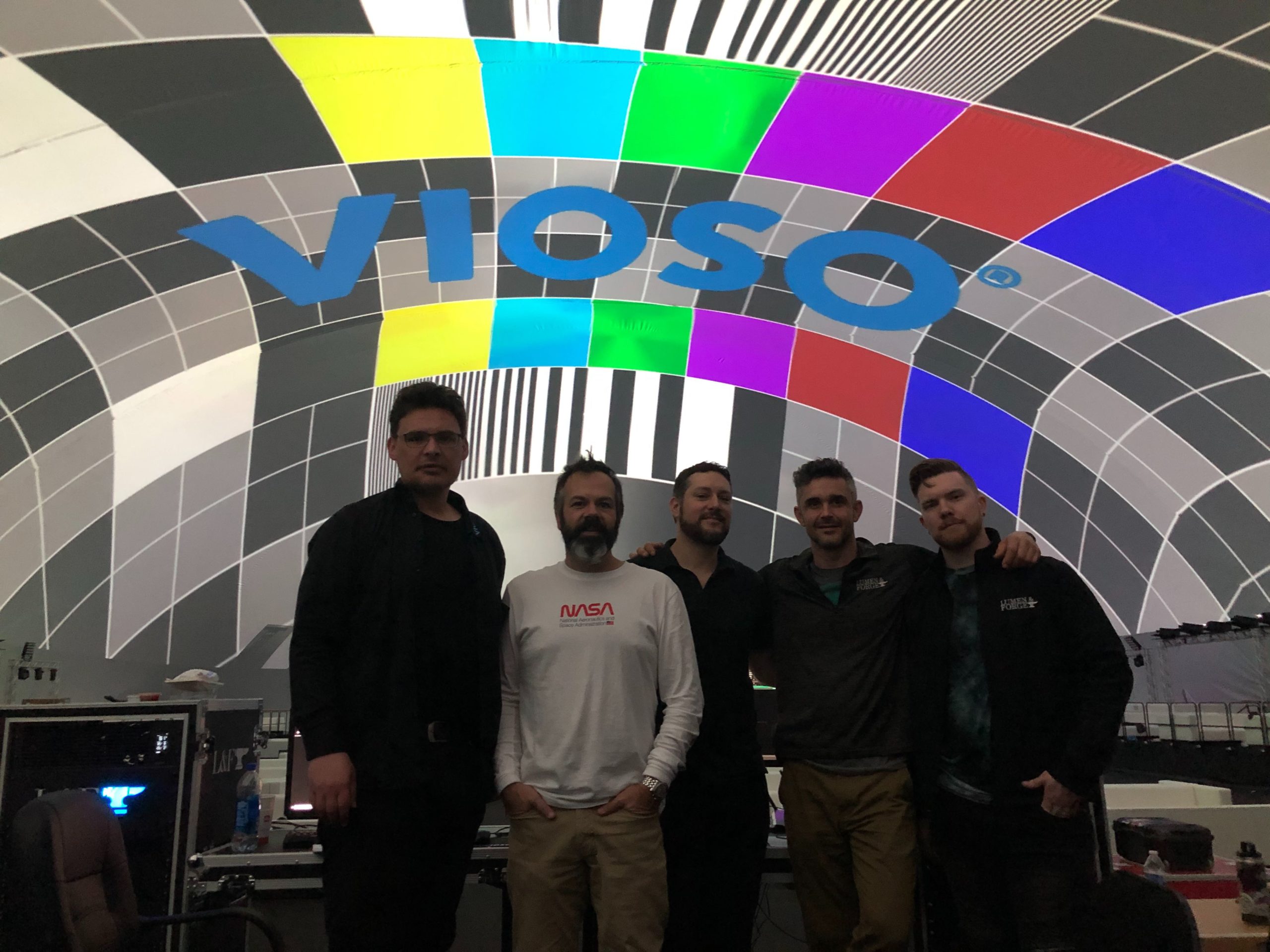 The teams only had one night for the final calibration, in which the size, scope and shape of the dome would again need to be reconsidered. “It was only by working closely with our exclusive auto-calibration partners at VIOSO that we overcame the issues and had a major success in both the quality of calibration and warping of the image for the opening night,” Fradin said.

“We have worked with VIOSO since the beginning of our company, so we have forged a strong and long-lasting relationship over the years, utilising their impressive simulation and projection mapping expertise. We look forward to collaborating with them again in the future.”