More than 25 years after they unapologetically catapulted into the UK charts, and 10 sincedisbanding to produce solo material, much-loved British rockers Supergrass returned to touring with audio rental house Britannia Row in February and March. 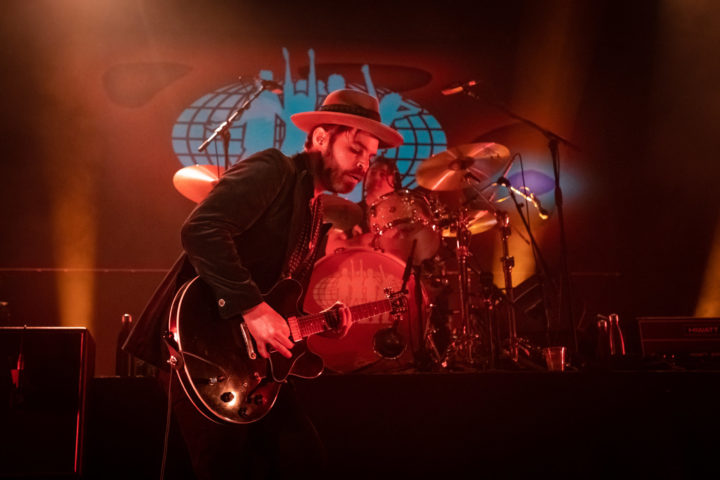 Describing his sound crew as being “amazing at their jobs,” Production Manager Adam King has, by his own admission, “loved” working with Brit Row and the Supergrass team for the band’s recent return to live music. His hope that “Covid-19 doesn’t disrupt the touring circuit and festival season too much,” was the thought embedded in every touring personnel’s minds during early March as the news began to really affect live music. As we know now, the reality is Coronavirus has resulted in tragic loss of life and put an unimaginable strain on a wide variety of industries,with live music amongst the earliest to be affected.

Supergrass were ‘lucky’ in the sense that they finished their sevendate UK run -which culminated in two sold out shows at London’s Alexandra Palace – prior to lockdown. FOH Engineer Max Bisgrove notes: “We had two fantastic gigs in London, and as these were my last two shows for what will no doubt be quite some time,it was good to go out on such a high note.”

King agrees: “The Ally Pally sound check sounded incredible in an empty room. It’s near enough impossible to achieve that,given that the venue is half a mile of concrete and a glass roof! The engineers did a really amazing job.

“I like to think of Supergrass as a classy punk band; they’re so powerful live. I was really pleased they decided to get back together because they’re one of our great British rock bands.”

“What struck me when I met them was the pure rush of energy that hits the second they start playing.It was quite a moment!” continues Bisgrove. “I had my brief for the mix instantaneously; try and get that energy across to an audience and make it as exciting as it had been for me in our rehearsal space.”

Bisgrove notes: “Brit Row deliver fantastic service, so they’re great to work with. A sound company is only ever as good as its people, and both Nick Jorden and Richard Trow were superb assets to the tour.”

Bisgrove states he “… kept things simple”and“ mixed on an Avid S6L-24C with no external outboard other than a Waves SoundGrid Card and Extreme Server.I sent the Matrix outputs to two Lake LM44s for better control of the various in-house PAs we used.”

There was also an “awful lot more carving up of the PA on the Lake than normal ”but explains this was necessary to get any kind of sonic coherence in Ally Pally. “The two delay hangs rigged at around 33m helped enormously and I was very happy with how the end result sounded,” he says.

Nick Jorden, who has been working closely Brit Row for a decadenotes: “Brit Row are second-to-none – their attention to detail is amazing and the care put into their packaging is amazing. You are safe in the knowledge that when you’re on the road, they have your back. Any extra tech support is only a phone call away. No matter where you are, they’ll source whatever you need.” 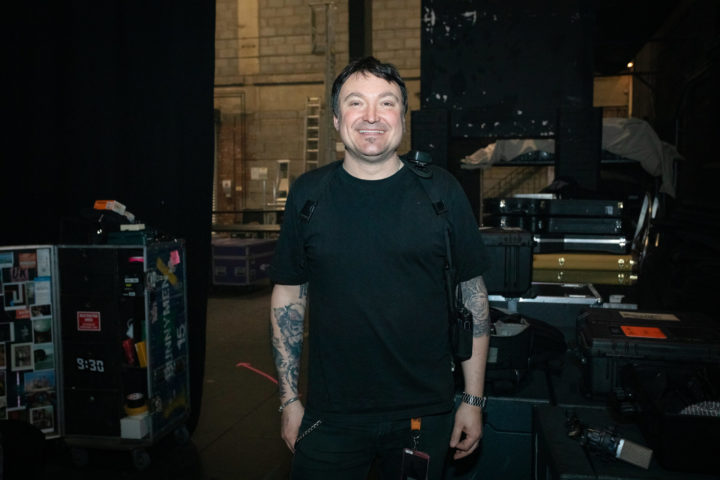 Unable to make production prep due to prior commitments, Monitor Engineer Annette Guilfoyle was “extremely pleased” to see herown gear well prepped when it turned up for the first rehearsals. Guilfoyle spec’d a DiGiCo SD12 console running 96 channels. Her SD rack, much to her delight, also came outfitted with a 32-bit card.

“Of course, there was tweaking as time went on,but all requests were dealt with very promptly. Nick Jordenwas brilliant; really on top of everything that was required – he was in constant communication with those back at the Brit Row warehouse and any issues we did encounter were dealt with swiftly.

“DiGiCo is my choice of console. I always try to use what is most appropriate to the circumstances; I didn’t need the channel count of an SD5 or SD7, and I like to keep the footprint of monitor world as compact as possible.”

RF equipment was Shure PSM1000s running through the AXT600 Spectrum Manager. Guilfoyle continues: “Given the reduction in available spectrum these days, and the fact that the band had a potentially large run of US tour dates and festival appearances ahead of them, Shure seemed the logical choice, due to performance quality and availability.”

Although this triumphant return was shortened across their wider summer datesdue to the unprecedented global pandemic, Guilfoyle looks back on this experience fondly: “Supergrass arefantastic to work for; theylove playing live together and it really shows.

“They have great songs, great musicianship and great stage presence, so combined with a real camaraderie between them, it made this tour an absolute joy.”