Acclaimed “The Brothers: Celebrating 50 Years of The Allman Brothers Band” show was staged at New York’s legendary Madison Square Garden just before the state went into lockdown in a massive effort to halt the spread of Covid-19. 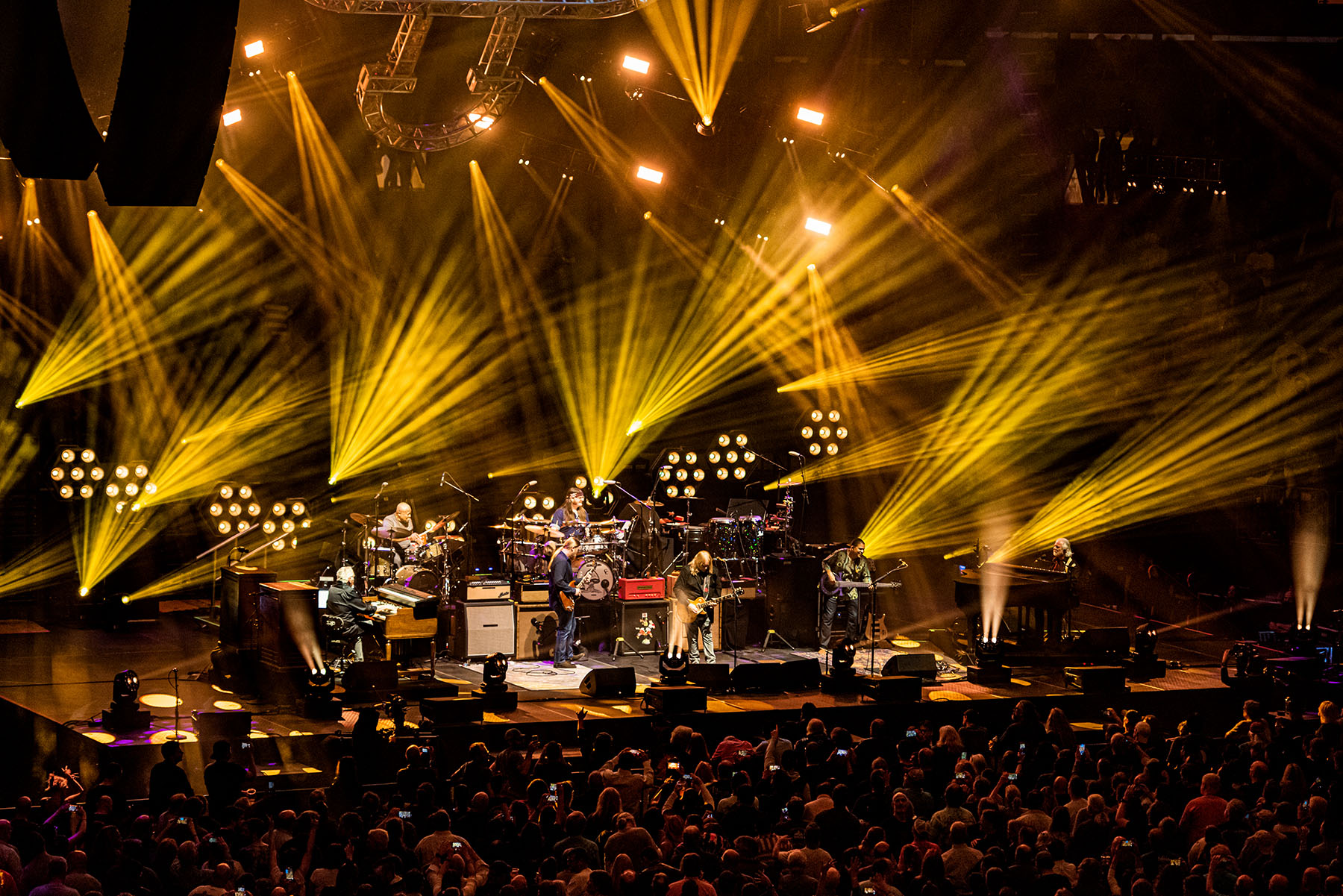 Lighting designer Chris Ragan utilized over 100 Robe fixtures in his dynamic design for the epic four-hour performance which delighted Allman Brothers and Allman Brothers Band (ABB) fans from several generations and all walks of life. The Brothers’ cult status and their dynamic fusion of blues, jazz and country with their own distinctive rock sound have resulted in their music and influence being relevant long after their first period of ‘glory days’ in the 1970s.

Chris has many connections and crossovers with several current members of the ABB, which has been a client for lighting rental vendor BML-Blackbird for 30 years – showing some impressive client loyalty.

When the late Earl “Pappy” Francis, ABB’s long-time lighting director passed away last year, Chris and many others in the lighting community lost a well-loved friend and hugely respected mentor. So, Chris was honored and proud to be asked to light this seminal 50-year celebration show.

By the time the event reached the design stage, the show had been sold in a 360 format, so Chris knew exactly what was needed in terms of sightlines.

The Allman Brothers were known for having liquid lightshows during the 1970s  and “we all really wanted to involve that look and style in this show,” explained Chris, adding that a substantial visual challenge was adding a video element that could be projected onto, without blocking any in-the-round sightlines.

The creative process started on a cocktail napkin – a near-mythical place where so many great ideas have germinated – during a flight to meet the MSG management team for a walkthrough of the venue.

Chris sketched a “large mushroom” that would hang above the band onstage – adding a projection surface surrounded by lighting. The mushroom was originally adopted by the Allmans as a psychedelic orientated logo that had transcended the history and various line-ups of the band.

A photograph of the napkin was sent to LX crew chief Mike Deitz – and by the time Chris was disembarking the same flight – the “Trusshroom” was already born! 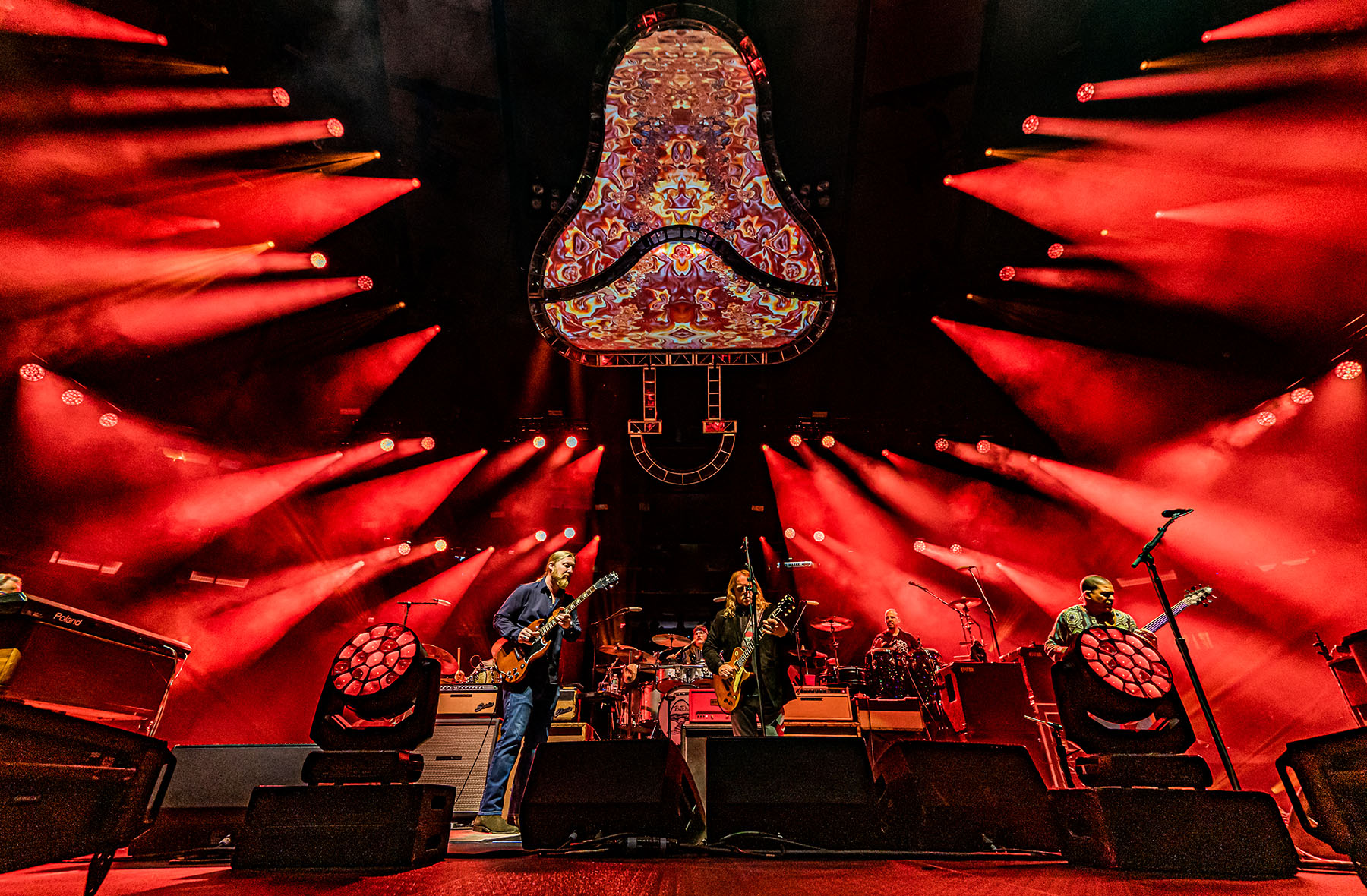 The 20ft by 30ft mushroom was created using an assortment of 12-inch truss circles, and when complete offered multiple projection surfaces. Mike, the “engineering mastermind” behind this, is a person whom Chris describes as a “veritable Swiss Army knife of the lighting industry!”

They then added four LED walls positioned at each corner of the stage to provide IMAG and to show custom show content created by Johnathan Singer, Marco Ferrero and Steve Pavlovsky. Adam Paul was the IMAG / camera / stream director.

The rest of the trussing configuration stayed straightforward as “real estate was at a premium” due to the large scale of the trusshroom centerpiece! It comprised four 21ft runs of HUD upstage, four 16ft runs overhead and one 52ft length downstage.

Once all this was determined, Chris positioned his lighting fixtures.

The Robe BMFL Spots were rigged on the upstage and overhead trusses; the Spiiders were also on these two trusses and downstage on the deck; the MegaPointes were on the upstage deck and overheads, and the PixelPATTs on a series of upstage truss towers at different heights.

BMFLs are Chris’ ‘go-to’ powerful profile fixture. “They have the brightness and intensity to light a canvas the size of MSG!” he declared.

He chose MegaPointes for their renowned speed and diverse range of features which were “great for framing the stage and providing cool prism effects”. 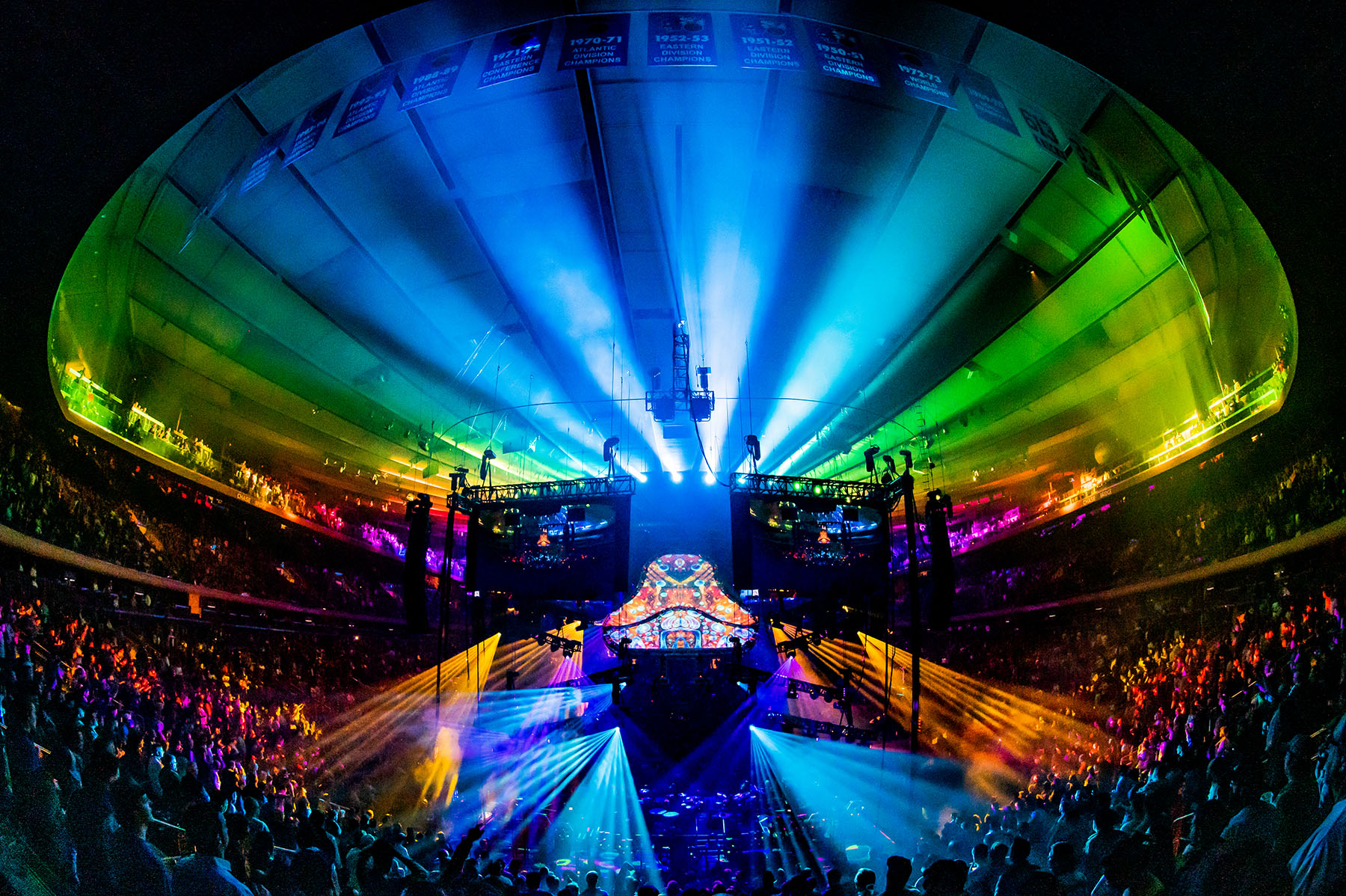 The Spiiders and PixelPATTs were used primarily as wash lights, together with their jazzy and dynamic pixel ‘tricks’ and the Spiiders doubled for “very effective” painting of the audience utilizing their flower effect.

“I love having the ability to mask pixels, it gives so many combinations and looks from one type of fixture and all of this helps keep the show fresh!” stated Chris.

As you can imagine, over the course of four hours – with one interval – a major challenge was evolving and growing the visuality and atmosphere and ensuring that there was always something interesting and dramatic to look at.

Chris specifies Robe products frequently for his work, and this is for the “consistency and reliability show after show.”

Also on the MSG rig were some profile moving lights for keys, plenty of strobes and around 100 lights dedicated just to audience illumination.

Control-wise, they used a grandMA2 platform with WYSIWYG. Luciano Savedra built the WYG file and Max Blackman assisted in programming.

Time was a massive challenge on site as they had only one day to load-in and get show-ready.

Vid, (David Sutherland) the band’s production manager “did an amazing job” in getting everything in and up-and-running in a timely manner, elucidated Chris! 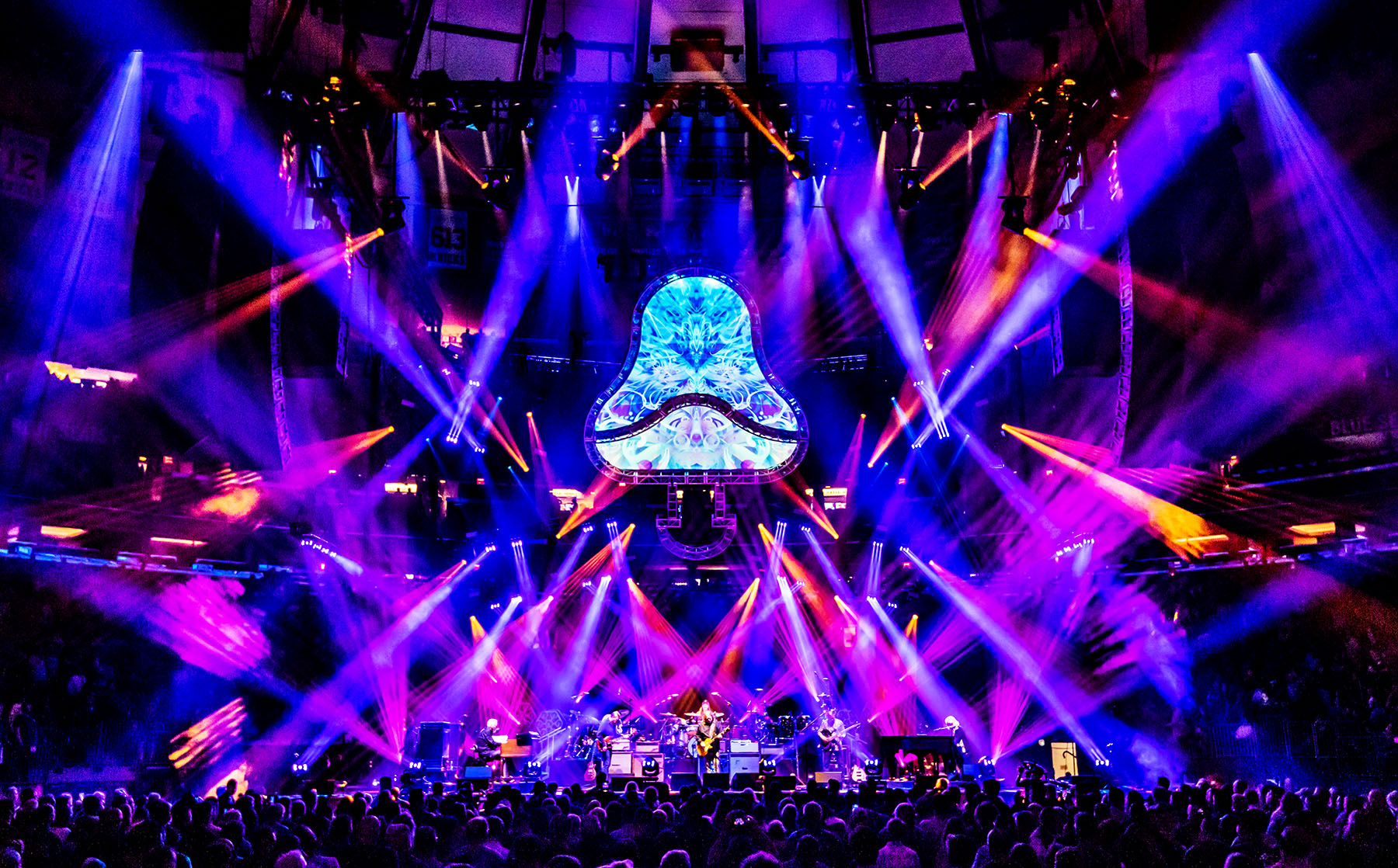 After that, the next challenge was the length of the show!

“Luckily, the band was very in tune with the setlist and its relationship to the dynamics of the lighting, visual and audio production, so they were also involved with the timing of lighting and video cues.”

Chris was inspired by many things whilst working on this landmark show, “The music of course and getting the chance to work with great friends,” were right at the top of the list.

Those great friends included the team at BML-Blackbird, including Shelly Diamond and Eric Todd with whom he’s had a working relationship for around 25 years! “They really hit it out of the park on this one!” enthuses Chris, impressed with their continued levels of support throughout the whole design and execution period.

In addition to Mike and Max mentioned above, he hails his “fantastic” crew from BML-Blackbird – electricians Lowell Hayley, Mike Hale, Jeff Toombs and Noam CC Cooperstock.