The youth of our interviewee is in stark contradiction to his extensive experience. Since he began working in the lighting industry, he has performed a great many tasks, from operator to becoming a Lighting and Stage Designer. At present, he is LD and Stage Designer of Love the 90’s, one of the most outstanding shows in Spain. We wanted to learn more about this great show, whose last three editions have included a 360º design that transformed venues into Discos. As part of Pixel Studios, the Spanish company in charge of the project, Eduardo shares information about the preparation for the latest editions of Love The 90’s. As this project is a show that repeats every year – and one that will continue if our fans want it to – we really started the autumn before the show. Because of this, next year’s design is finished; the finished riders and the two adaptations of the two shows (Madrid and Valencia). We are also already working on the creation of the videos. Once we have this finished, we will begin programming lights, laser and FX, which will span around five months.

What did you want to offer for 2019 edition to differentiate it from the previous ones?

This was the third edition of LT90s and we had to bring something unique to the table, creating a measured show of more than five hours with five hours of visuals created specifically for the performance. All this needs to be synchronised by code, in addition to the video, lights, lasers and FX.

When thinking about a 360º experience, we imagine an environment that surrounds the user. How did you manage to implement the proposal in environments that were not a Disco?

None of the three shows we did were in a disco, but the idea was to turn the space into a Disco. We set up a large stage, in which we host the main performances, especially those that require back line gear. In addition, we had a 50-meter walkway (in Valencia). At the end of the catwalk we had the booth of our resident DJs, the Jumpers Brothers, and on them we designed a large 10-meter ball with an LED screen and 50 Robe Robin 150 LEDBeam fixtures to simulate the rays of a mirror ball. 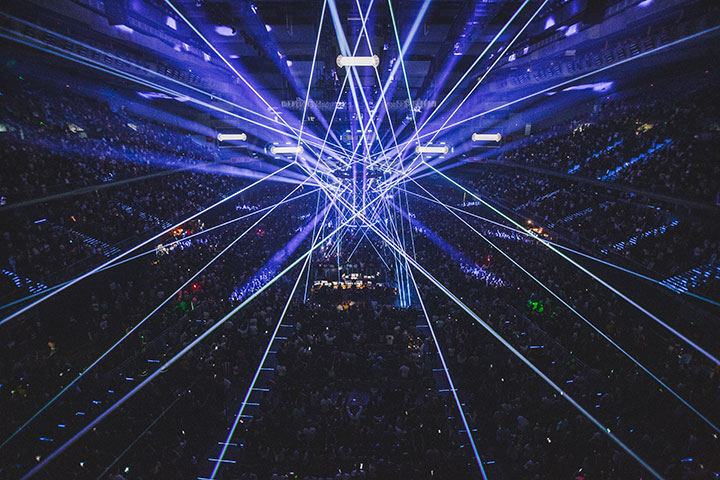 I imagine each show as a huge dance floor. Can you give us details of the lighting equipment used and the functions of each device group?

Due to the density of LED screens in the stage area (we had more than 150m2), we needed to utilise the most powerful luminaries, which were the Robe MegaPointe, in addition to the Robe 800. Having so many elements flown meant that we had an additional difficulties with the follow spots, so we had to use 4 remotely controlled spots, specifically the Robe Robospot. For the outdoor areas of the stage, and the hanging elements, we had to lose weight, but without losing power. Here we exchanged the Mega Pointes for normal Pointes and, as before, we used 50 Robin 150 LEDBeam for the ball. In addition, we had blinders distributed everywhere, SGM Q7 LED Wash/Strobes, and the scenery was profiled with Martin VDO LED bars.

A 360º show must present a marked difficulty when controlling the luminaires. How did you control these during each show?

In total, across static LED fixtures, moving heads and conventional lights, we carry more than 500 luminaries. To control these we use two GrandMa 2 full size and 6 NPU. I don’t remember how many universes exactly, but it’s in the region of 40. All this was pre-programmed in the studio with the Wysiwyg software from Cast software, To make the presets on the sites we had to put one of the consoles on a cart and move it around the venue.

Can you tell us if the staging was the same for all three shows? If not, what elements of the design were adapted for each venue?

The three shows were different, both because of the venues themselves and the parts that the artists change for each show. The Madrid show always forms the basis for our plans, and we adapt from there. Valencia and Seville are performed outdoors so we have to assemble special structures for this. Specifically, the Litec MYT system, with 20m high supports.

Who worked on the 2019 Love The 90’s show, and what functions did they fulfil?

In the artistic department, we had Hugo Albornoz as Director and Producer of the Sharemusic production company. Eduardo Peña was Creative Director and Musical Director. Eduardo Valverde, Lightning director and Stage designer. On the technical side, Juan Manuel Lázaro was systems technician and programmer with Carlos Fernandez as Project Manager. David Inlines was the Audiovisual Creative, with Sergio Puig as Producer and Director of Video.

What companies were involved in this production and why did you decide to work with them?

Our only supplier for this tour was been Fluge, (Sound, Video and Lights), although the decision to choose them was not mine, but the Sharemusic production team led by Teresa Álvarez. My choice would have been the same, since, in my opinion, this is the company is able to offer us the most facilities for our project. Also, we have a regular FX provider, Pyrotechnics Vulcano, and our great friend Javier Sanchis de Piro-Laser who is, in addition to our usual Laser supplier, the programmer and designer.

This show aside, why did you decide to work in lighting design?

Well, I have been working in Lighting for more than 25 years, and I have held all kinds of positions – follow spot operator, technical management in rental companies, programmer, operator, etc. I have made film, TV, theatre, musicals, circus, rock tours, and of course electronic music festivals. Thanks to this I can add something to almost any production type. 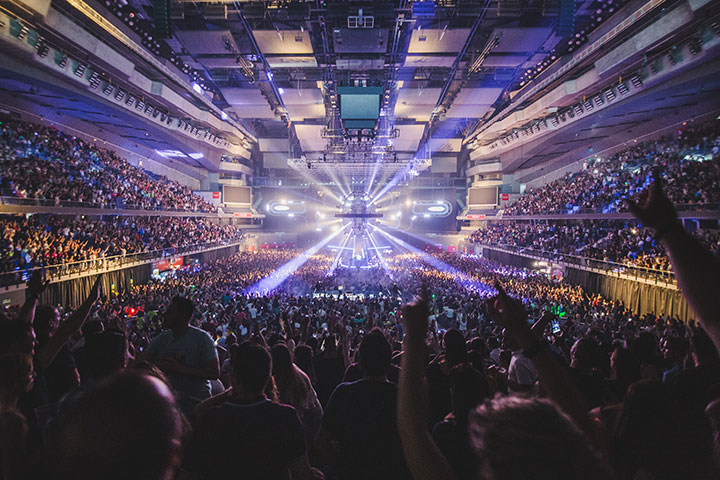 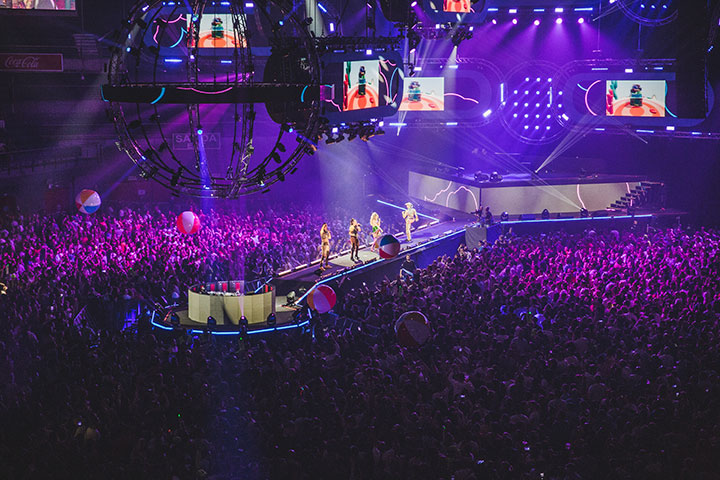 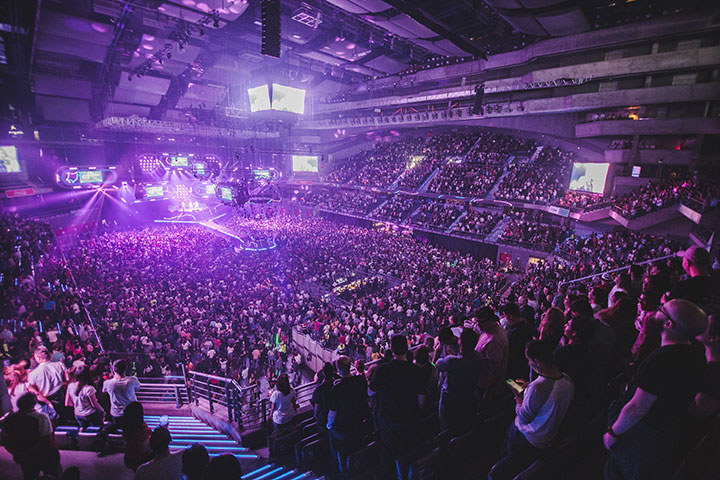 What distinguishes a great Lighting Designer from another who has just started in the profession?

Well, as in all professional fields, if you have a lot of experience and add it to having creativity/talent, you can create high quality things. Without this experience, it is far more difficult.

On your webpage you mentioned that you started working on lighting as recently as the 90s; Which of the tasks related to lighting – or the overall visual aspect of a show, has gone through the most changes in this time?

From when I started in the early 90s, there have been a great number changes in all aspects, from productions to work environments and, of course, the technology. In this area I have seen two big leaps happened: the first was the gradual disappearance of conventional fixtures and their replacement by moving heads, and the one we are living through right now in which, in a very short period of time, the discharge lamps for moving heads are being replaced by LED sources.

You are part of PixelMap Studios. Can you tell us what the company offers to its customers?

We are a company that provides creative services for entertainment, corporate and specialised shows. We are also dedicated to the creation of video content, stage design and scenery, amongst many other areas. In addition, our R&D team is currently developing Augmented Reality and VR applications.

Do you only deal with large productions or do you also provide services for small customers?

We do not have small customers; all are equally important. We may be required to go to a festival just to operate, or  we may be part of the e integral design of a large event.