Montreal-based visual design practice Luz Studio, headed by Matthieu Larivée, created the eye-catching production design at the core of French-Canadian singer and impressionist Véronic DiCaire’s current “Showgirl” tour, which had a very successful launch in Canada in December 2019, then toured arenas in Europe … before the Coronavirus pandemic took hold and curtailed all live events until the curve is flattened. 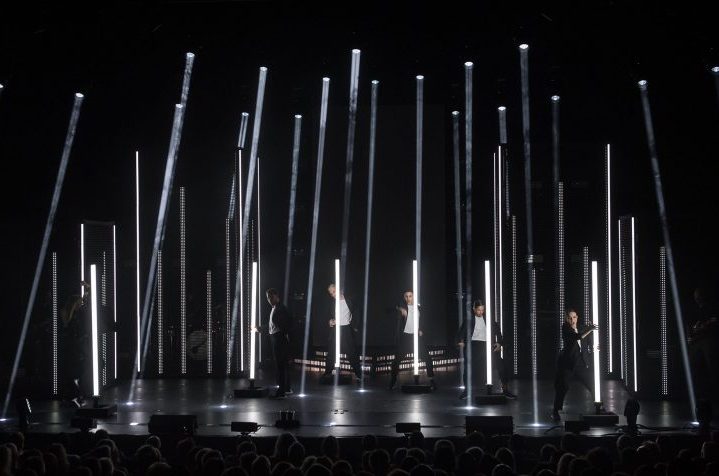 The Showgirl concept saw the artist delivering material written / performed by around 50 iconic female vocalists – from Dua Lipa to Celine Dion – in their style and voices, backed by six dancers and four musicians.

Matthieu proposed a harmonious and integrated set, lighting and video design which featured Robe moving lights at the center, with 28 x MegaPointes and 12 x Spiiders, plus six BMFL Blades and two BMFL Spots being used with a RoboSpot remote follow-spotting system.

The stage architecture was defined by five distinctive LED columns onstage, a central flat-plane LED surface flanked by four 3-sided columns with the four musicians in the middle, which allowed them to be concealed and revealed as desired. This highly effective visual trickery also preserved the form and structure of the performance space.

Working closely with the artist herself and her creative team including show director Josée Fortier, choreography / stage director Geneviève Dorion-Coupal and artistic director Patricia Ruel, Matthieu developed the lighting and video content together into a coherent aesthetic treatment for each segment of the show.

“Véronic was extremely clear that she wanted more abstract visuals and a fluid lighting and video design to support her performance,” he explained. With no wigs or costume changes, the different characters and their songs are all identified by the changes in her voice, and the audience needed to get the message in a few short seconds, so the production visuals keep the focus on DiCaire.

Matthieu has worked with DiCaire on some TV shows and specials previously, but this was his first tour design. He also collaborated closely with Pierre Martinez (lighting director on the last tour) and asked him onboard again in the same role. 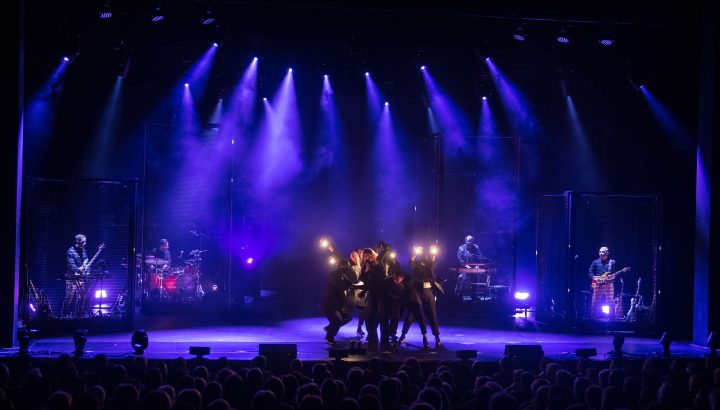 The basic starting point for lighting the show was the band on stage. Each musician was positioned on an 8ft x 8ft riser, which DiCaire wanted visible – or not – throughout the set, so the first task was integrating these risers slickly into the stage design. Utilizing blow-through screen with no PSU was the first phase of dealing with the ‘invisibility puzzle’.

“MegaPointe was an ideal choice because it’s a nice multipurpose fixture with multiple features” stated Matthieu, all of which he needed to produce a diversity of new and fresh looks for the pool of around 80 songs on which she drew each night!

The MegaPointes were mainly positioned on the overhead rig in a V-shaped configuration, and on two vertically hung drop-bars either side of the center screen.

They produced the desired looks either by pointing directly downwards or being zoomed out very wide to light the screen structures. No gobos were used, but the beams and colors were fully maximized.

Six of the 12 Spiiders lived on the most downstage overhead truss or LX fly bar, with 6 on the floor in the offstage footlights position for front lighting and washing across the stage in a range of colors. 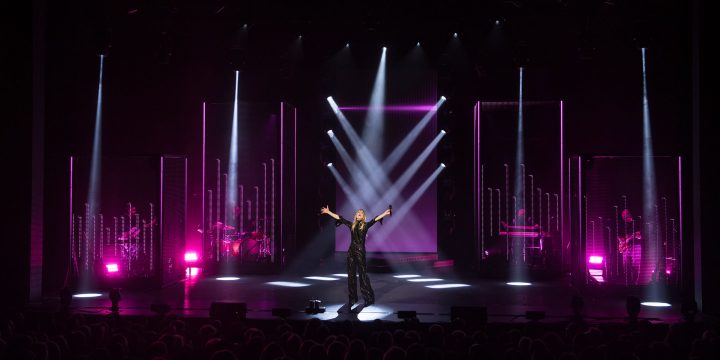 The BMFL is one of Matthieu’s go-to fixtures choices for key lighting and follow spotting.

On this show, all six BMFL Blades were rigged on the downstage truss where they doubled for front lighting and could be swung round to illuminate the audience. The two BMFL Spots on the RoboSpot system were also on the front truss.

Each song had its own colors, character and choreography, and as DiCaire is very particular about her spot operators, running a RoboSpot system enabled them to concentrate fully on following her movement accurately … while Pierre changed other parameters like color, iris and intensity via the grandMA console on which he ran the show lighting.

Matthieu has been utilizing BMFLs, MegaPointes and selected other Robe fixtures in his designs for some time and thinks they are a reliable and versatile option.

His challenges for this show design included imagining something that was adaptable and practical to tour that would fit into two trucks and look equally good, dramatic and vibrant in a cozy 800 capacity venue or an 8000-seat arena.

Some interesting custom fixtures were added to help create specific effects, including wireless gloves with lights held by the dancers during the opening sequence. Matthieu also had some special 2-meter mappable LED tubes built which are fully seamless and were carried, lightsaber-style, by the dancers during one of the medleys.

Lighting and video equipment for the tour was supplied worldwide by Solotech.