L-Acoustics is proud to announce that it has been named to Fast Company’s prestigious annual list of the World’s Most Innovative Companies (MIC) for 2020. The list identifies the businesses making the most profound impact on both industry and culture, showcasing a variety of ways to thrive in today’s fast-changing world. This year’s MIC list features 434 businesses from 39 countries. 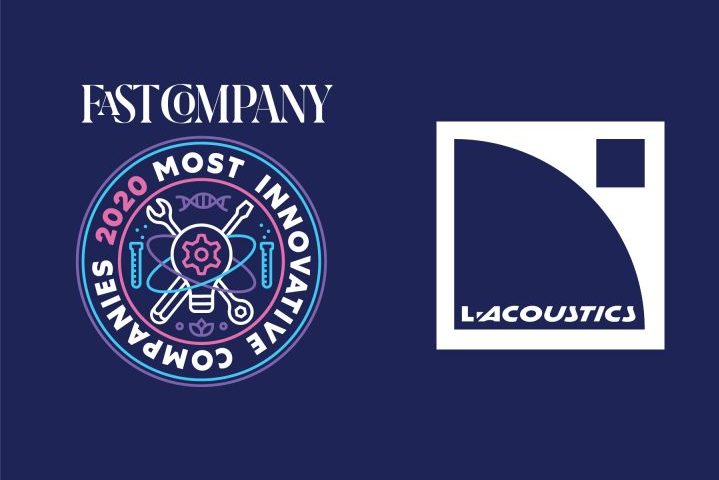 “It’s a privilege to be recognized by Fast Company as a leading global innovator,” says L-Acoustics CEO Laurent Vaissié. “Our founder, Dr. Christian Heil, introduced the V-DOSC line source array system in the early nineties, revolutionizing the concert audio experience and altering sound system design forever. This invention spun a new era for the loudspeaker industry, today resulting in nearly 100% adoption of line array technology by top tours, venues, and festivals worldwide. Over the years, L-Acoustics continues to encourage a unique culture of innovation and product design excellence, developing industry standards like K1 and the first 3D sound design modeling software with Soundvision, or introducing flexible directivity with Panflex. Recently, L-Acoustics has once again raised the bar for the live sound experience with L-ISA Immersive Hyperreal Sound technology, which breaks down the limitations of traditional stereo systems to create a more intimate connection between the artist and audience. We shape the future of sound, and it sounds absolutely spectacular.”

L-ISA was introduced in 2016, and since then, twelve million spectators have enjoyed more than eight thousand performances in L-ISA, which is a 40% jump over the past year alone. High-profile deployments of the technology have included Aerosmith’s ongoing Deuces Are Wild Las Vegas residency at the Park Theater at Park MGM, as well as Lady Gaga’s Enigma and Jazz & Piano residencies in the same venue.

The North American concert sound market has experienced a rapid rise in L-ISA productions, notably including the following tours: Bon Iver ( Autumn), Mark Knopfler ( Down The Road Wherever), Lorde ( Melodrama), Childish Gambino ( This Is America), and Blue Man Group ( Speechless). Other innovative artists—such as alt-J, deadmau5, and ODESZA—have likewise embraced the technology for engaging one-off performances, as have the Colorado Symphony and Los Angeles Philharmonic for cinema-related events.

The reach of L-ISA has also extended beyond the realm of conventional live sound reinforcement to include installations at various experiential venues (NYC’s ARTECHOUSE and SPYSCAPE), theatrical productions (L.A.’s CAGES, Miami’s Sleeping Beauty Dreams, and NYC’s Broadway Bounty Hunter), houses of worship (Atlanta’s Mount Paran Church of God), and corporate events (Dreamforce, and others), among other applications.

Fast Company’s editors and writers sought out the most groundbreaking businesses on the planet across myriad industries, also judging nominations received through their application process.

The World’s Most Innovative Companies is Fast Company’s signature franchise and one of its most highly anticipated editorial efforts of the year. It provides both a snapshot and a road map for the future of innovation across the most dynamic sectors of the economy.

“At a time of increasing global volatility, this year’s list showcases the resilience and optimism of businesses across the world. These companies are applying creativity to solve challenges within their industries and far beyond,” said Fast Company Senior Editor Amy Farley, who oversaw the issue with Deputy Editor David Lidsky.