Miami is known for doing everything with a certain high style, and its symphony is no exception. Conductor Eduardo Marturet wields a Swarovski crystal baton, leading the orchestra through repertoire that ranges from Brahms and Beethoven to jazz, Latin, and film scores. For their concerts in unique venues such as the Moore Elastika Building — originally a 1920s furniture store and now an art gallery and event space in the heart of the Design District — events contractor Pete Diaz Productions turned to QSC, specifically a host of CP8 compact powered loudspeakers, K12.2 active loudspeakers and KW181 active subwoofers. 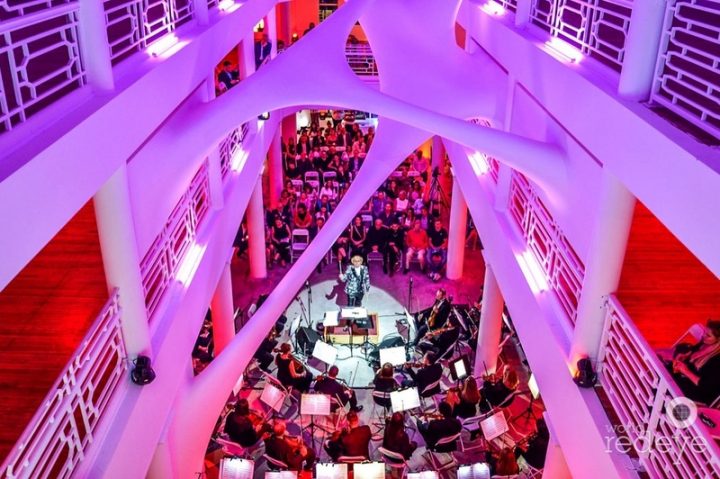 “The Moore Building is a centerpiece of the Miami Design District, and the Miami Symphony does several shows there every season,” says Peter Diaz Jr. “We’re their preferred vendor for audio; we use QSC speakers for everything the audience hears as well as the orchestra’s monitors.” The room comprises a main floor ringed by three levels of mezzanines. This soaring atrium created an acoustical challenge for the Diaz team, who needed to ensure that audience members heard the same sound no matter where they were seated.

Asked about the particulars of producing concerts in this relatively narrow but vertically extended space, Diaz notes, “The challenge in this venue is the floor plan. The orchestra is set up on the main floor, with some of the audience seated there as well. You also have some of the audience seated on the balconies, which surround the main floor on all four sides. So we had to consider independent listening zones for the different areas.”

Richard Gomez, one of Pete Diaz’s engineers who operated the event, determined that the irregular spaces would be best served by a large number of small point-sources as opposed to a lesser number of large speakers, and immediately gravitated to the QSC CP8. “The dimensions of the QSC CP8 were key,” says Peter Jr. “The ceilings in the mezzanine areas are not high, maybe eight feet. The CP8s were so unobtrusive and could be mounted in a variety of ways. And the fact that they have 90 degrees of nice, even coverage let us make sure everyone was having the same listening experience. We wound up buying sixteen of them to spread throughout the venue, plus four of the KW181 subs to distribute the extra lows of instruments like double bass and timpani. This allowed us to basically establish a separate sonic zone per floor. The K12.2 loudspeakers, which are fuller range and larger, are used as long-throw fills and monitors for the orchestra on the ground floor.” 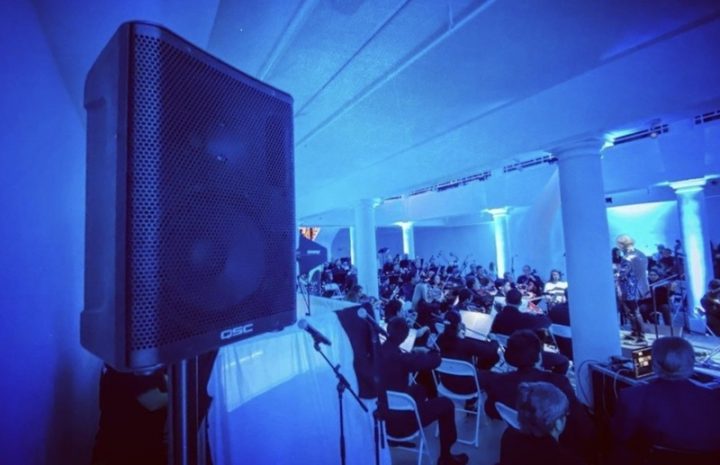 Diaz was also impressed by the sound of the CP8, which is a lot bigger than its size would indicate.

“I know the CP8 is rated for 1,000 watts peak,” he says, “but I wasn’t expecting this much punch from such a small box.” Thanks to features such as Directivity Matched Transition™, which ensures consistent frequency response across the entire coverage area, Diaz was able to observe, “The fidelity is excellent. This isn’t dance or rock music in a nightclub. It’s detailed, intricate material, and the audience is there to listen actively and intently. The CP8s are great at reproducing detail, in part because they’re small and nimble.”

Pete Diaz Productions could not be happier with the raves resulting from all that active, intent listening. “Everyone is really, really delighted with the QSC CP8,” he says. “We regularly receive very positive comments about the sound from the audience members. Musicians in the orchestra have commented that they can hear players in other sections better. The musical director, Maestro Marturet, is an extremely accomplished guy and he’s very happy with the sound as well.”

For a production company buying multiple units of the same product, price-performance ratio is perhaps the most important consideration at the end of the day. Diaz is likewise pleased in this department, especially with the CP8s. “The fact that the CP8s are so compact and affordable is one thing – but the fact that they also sound amazing brings them to a whole other level.  QSC is now our go-to system for all of our small and medium-sized concerts.”