David Kachlir has delivered a lively and vibrant lighting design for the current production of Mamma Mia, which is playing on the 680-seat Musical Stage at Městské Divadlo (City Theatre) in Brno, Czech Republic, an eye-catching production that is already proving hugely popular and has won great critical acclaim.

At the heart of the Musical Stage lighting rig are some of Robe’s most refined LED luminaires including new T1 Profiles and T1 Fresnels, DL7S Profiles and LEDBeam 150s, part of an investment process in the brand that started in 2015. 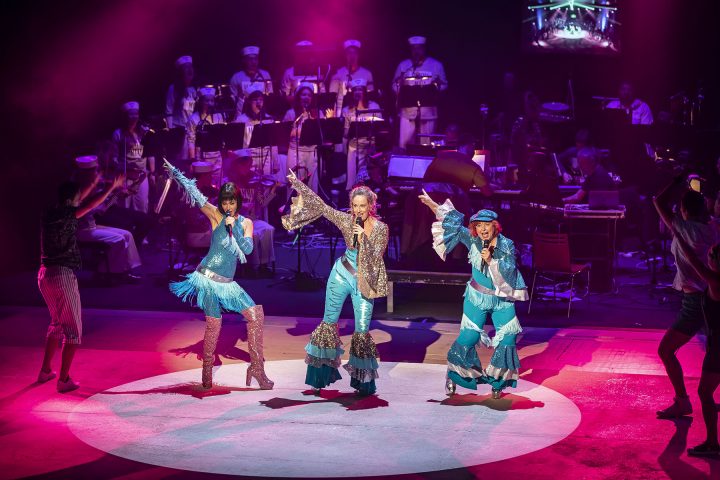 It’s the first time that David has lit the foot-tapping jukebox musical and ‘romantic-comedy’ written by British playwright Catherine Johnson, based on the songs of Swedish pop phenomenon ABBA and set on a Greek island.

He has thoroughly enjoyed the challenge, working alongside a strong creative team including director Petr Gazdik, also one of the Czech Republic’s best-known actors, and set designer Emil Konecny.

“Petr had some very clear ideas about lighting right at the start of the creative discussions,” explained David, saying that while he communicated these very lucidly, Petr also values working collaboratively, “so I also had the space to come up with suggestions”.

The results are a truly impressive production which unites great stagecraft with humour, fun, drama and some superlative pop classics, all played live by the theatre’s resident orchestra.

After two intense days of watching a video of the acting rehearsals with Petr and making extensive lighting notes, David started plotting his lighting positions.

The 14 x DLS Profiles, featuring the 7-colour engine specifically designed for theatre – are split into two positions – a row on one of the upstage LX bars for rear lighting, specials, gobos and texturing onto the floor, etc … and a row of seven on one of the front advanced bars just about the first rows of the audience.

The front ones are used for a variety of white tones, from the warmest to coolest, which can be fine-tuned almost infinitely and are “a real asset” says David when tailoring scenes for specific times of the day referenced in the narrative.

The gobos were extremely important for adding drama – from the nightmare sequence to the party scenes – plus in-air effects and being overlaid on both actors and buildings. The main set pieces are on three trucks which are rotated so all four sides can create the different locations. 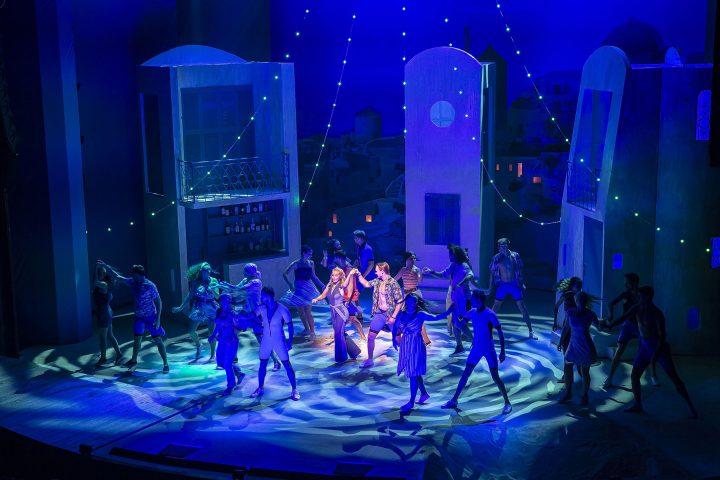 The rear DL7S Profiles made perfect specials and atmospheric lighting for some of the solos as well as picking out the principles in the big production numbers with all the cast onstage.

The 11 x T1 Profiles feature a five colour mix which David observes harmonises “beautifully and seamlessly” with the 7-colour mix of the DL7S Profile. He appreciates the way you can insert one of the three T1 frost options at any stage of the zoom to produce a “perfect” spot. He thinks the fixture is “absolutely made for theatre”.

The T1s were a new purchase for the theatre this year and Mamma Mia was one of the first productions to harness their power and flexibility. David loves them for their output and the colour mixing – which facilitates virtually any colour – plus compatibility with the DL7S’s.

A collage of colours were combined and used throughout the show evoking numerous atmospheric scenes on the island … sandy beaches, stunning sunrises, cool blue moonlit nights and azure blue seas.

The two T1 Profiles are used for scenic gobo projections onto the set pieces which also have their own internal ‘practical’ light, and the two light sources combined helped create set a real 3D appearance so the buildings really ‘pop’ out.

They are also used for a ‘disco ball’ moment in the finale – without which no self-respecting Mamma Mia production would be complete!

The 8 x LEDBeam 150s in the show are rigged at the FOH boom positions – together with some conventionals – and due to the open pros arch design of the Musical Stage and the excellent zoom on the LEDBeam 150, they are invaluable for lighting all the front of stage and downstage left and right action.

The overall lighting goal was to recreate the diverse locations and many time references throughout the story in a way that the audience hardly notice the lighting, states David, who also programmed the grandMA console. The show has so many complex cues, this was the quickest and most efficient option, and he is also operating for the nights the show is playing in the theatre’s busy repertory programme.

David has worked at the City Theatre, which has won multiple awards and is one of the best known and most respected in the Czech Republic, for 29 years. The Musical Stage was opened in 2004 to complement the existing 365-seat Drama Stage.

He started initially as a stage technician in 1991 and now lights all their shows … involving around 11 new productions a year across both Drama and Musical Stages. In addition to that, there is a 2-month outdoor season in the summer, and they tour some shows to other venues around the country. 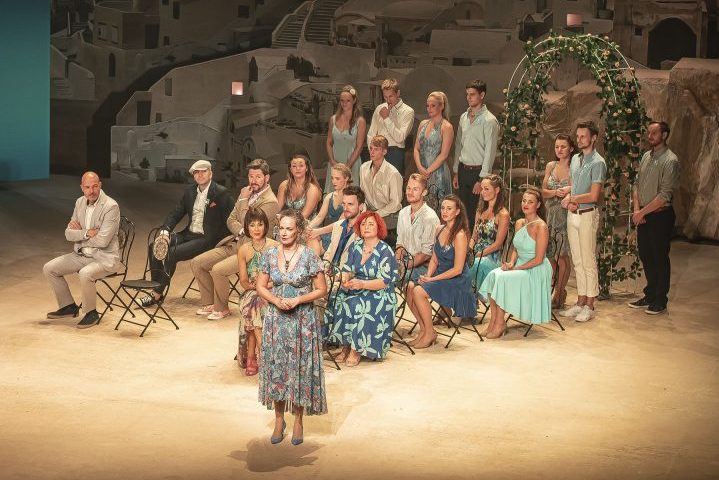 The first moving lights arrived in 2004 and were from a competitor band. When the more recent investments in Robe commenced, these were at the end of their lifespans!

In those 15 years, Robe has grown from being the new-kid-on-the-block to the leading global moving light brand.

When David and his team started looking for replacement moving lights, they also wanted to go down the LED route, and by this time, Robe was regarded not just as a top manufacturer, they were trailblazing LED lighting innovation.

The very first Robes purchased by the theatre were 60 x LEDBeam 100s in 2015 which were integrated into the set of “Johnny Blue” a German production. After this show, they replaced a load of PARs that had been part of the house rig with the LEDs. They also purchased some IP 65 rated iParFects for the outdoor stage used during the summer.

Next, LEDWash 600s and 800s joined the rig and also DL4S Profiles … all of these, with the arrival of the DL7S’s and then the new T1s, have now been cased up and are used as part of their touring rig.

In 2016, they bought the DL7S profiles which made a huge difference to the way David could light shows offering a lot more scope and flexibility, and these were followed in 2018 by the elegant T1s.

The Robes were sold and supplied to the City Theatre by reseller Prolight s.r.o., one of the leaders in theatre and television markets. The company owned by Ondrej Skala and David Strnad, is based in Prague and known for its fantastic end-user support.

This constant investment in the latest Robe technologies ensures that City Theatre productions continue to push boundaries in the quest to remain successful and known for the quality and entertainment value of their productions and for being at the cutting-edge of the highly competitive performing arts world.