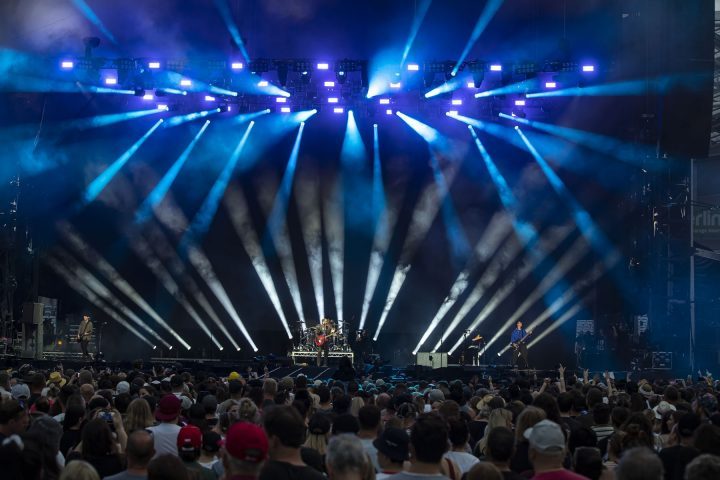 Throughout the day, the heroic and super-real efforts of people uniting and the dedicated commitment of the firefighting community were highlighted in the context of the massive fight to save lives, homes and land. The extraordinary spirit and resilience of Australians has shone through and continues with the many efforts and initiatives contributing to rebuilding after the fiercest and most destructive bushfires in Australian history.

The nightmare scenario has touched people worldwide and seen people galvanise in incredible generosity and support with donations of money, general supplies and services to the various organisations assisting the recovery effort. It’s brought the need for urgent attention to climate change – once again – into sharp focus.

Presented by comedian Celeste Barber – who has herself raised over A$50 Million for the relief fund – this was arguably THE most significant gig in the world that weekend.

Their many challenges included an exceptionally short planning period and get in time on site.

Queen + Adam Lambert played the stadium the night before … utilising the same roof but with their own production lighting rig, so that was completely stripped out before Dave, Jeff and their crew of 8 could start their build at 4 a.m. – to hand over for a show-start 8 hours later. 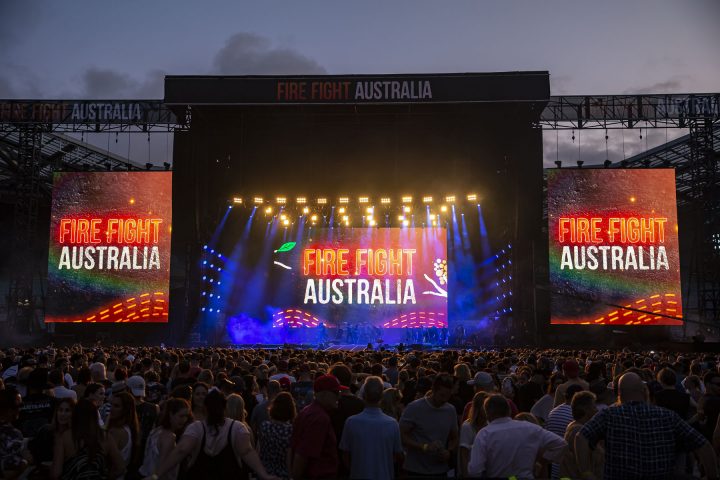 Creatbive Productions donated the entire lighting rig plus all the preparation expenses and crew wages for this landmark occasion after they were contacted by Colin Skals of promoters TEG DAINTY who organised the event for Fire Fight Australia.

It coincided with three major international tours that they already had in progress – Q+AL, Alice Cooper and Michael Bublé – of which the latter was performing in Melbourne that same night, so a portion of this show was beamed live on to screen at the ANZ Stadium.

Dave’s production design for the show had to provide great looking lighting for the 20 diverse artists on the bill – and the cameras once the decision was made with about 10 days to go that it would also be a live telecast beamed worldwide.

The only essential brief that they received on lighting was that there would be a large upstage LED screen plus left and right IMAGs … so this plus the fact it was in a stadium and had to be available from rental stock during an already busy period … Led to Dave’s choice of Robe BMFLs as the main workhorse lights on the rig.

“I needed something with serious punch,” he commented, “not just because it was a stadium show, but also for the daytime filming,” which covered most of the artists.

Dave thinks that BMFLs are still the only moving light where colours are “properly perceptible” in daylight, especially the BMFL WashBeams.

The 30 x Spiiders – 15 a side hung on three ladders stage left and right – were added once the telecast was confirmed – picked for their great range of colours and CT whites and also for excellent pixel and ring-control ‘back-of-camera’ effects for the side shots. “They worked brilliantly in these positions,” confirms Dave.

Creative Productions owns over 300 Robe moving lights and has been investing steadily in the brand over the last two years.

In addition to the Robes, Dave used an array of LED battens, strobes, and 4 and 8-lite blinders, together with some additional waterproof beam lights for Q+AL’s B-stage.

All of these were controlled from a grandMA3 full size which was the main event ‘house’ console, with a grandMA2 full size for backup. A Hog 4 was provided for LDs preferring to work from that and a greandMA3 lite was available for any LDs who wanted to take advantage of pre-vis time during the day. 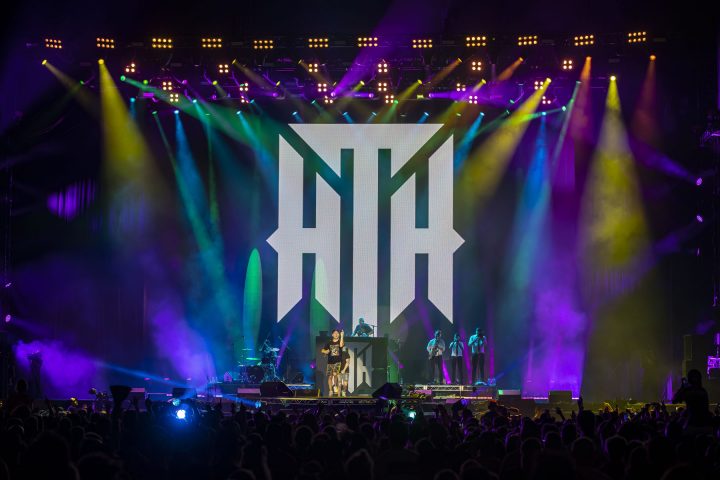 Dave and Pavey looked after all the visiting LDs and ran the lights for all those who didn’t have an operator.

The average 15 – 20 minutes sets and quick changeovers were interspersed with video footage capturing some of the incredible efforts and initiatives that are part of the post-bushfire rebuilding programmes, with many stories of survival and heroism.

Celeste Barber yelled thanks repeatedly and with much passion throughout the night in particular to the thousands of volunteer firefighters around the country who battled to exhaustion and some to their deaths “we can never, ever say THANK YOU enough,” reverberated around the stadium time and time again in an emotive, intense evening that illustrated so much unity in the face of the crisis.

It was the third bushfire fundraising event that Creative Productions has donated its kit to so far in 2020 – equipment, services, energy and expertise.

Sound was provided by JPJ Audio and video by Big Picture Australia (NEP).