In April 2019, the German singer / songwriter Lena Meyer-Landrut released her fifth, critically acclaimed studio album, ‘Only Love, L’. In June, the ‘Only Love’ tour of 12 dates took the band through small to medium-sized halls in Germany, Austria and Switzerland. 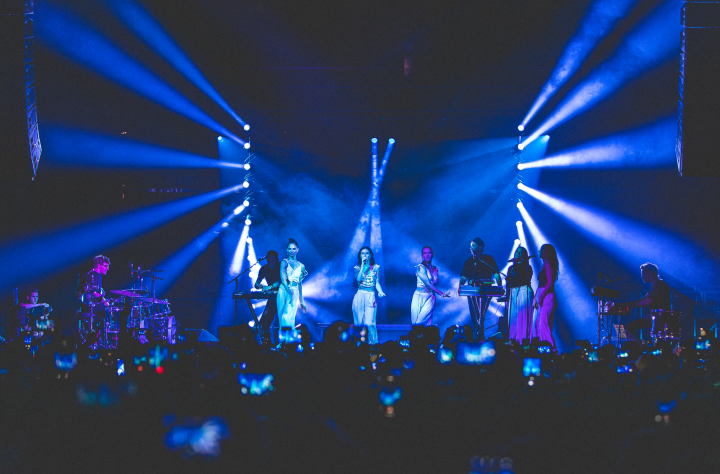 Designer JoJo Tillmann developed a reduced set with a scalable lighting design for single-trailer transportation. Although there were four musicians, two backing vocalists and two dancers on stage, alongside the singer herself, the show was not conceived to be ‘over-staged’.

“I designed the set on a very stripped-down basis,” reports OPUS award winner JoJo Tillmann. “Apart from a small ramp leading up to a platform, there were no set building elements on the stage. As a result, versatility became all the more important.”

For his lighting design, he mainly used fixtures from the GLP catalogue: impression X4 Bar, KNV ARC and Cube as well as FR1 made up the majority of the lighting—and always delivered surprises thanks to the creative deployment of the individual elements.

He arranged the X4 Bars, one of JoJo’s “favourite light tools”, one above the other like the rungs of a ladder, and placed the construction directly behind the platform. “The individual Bars resembled a large light mirror,” he explains, adding that “basically, the X4 Bar provides the real hit and is a really unique fixture”. Hardly any lighting design can manage without the versatile LED Bars, he believes. Here they were framed by two vertical columns, each consisting of six GLP KNV Arc left and right. “We lovingly named this arrangement the ‘palm tree’,” recalls the designer.

The two ‘palm trees’ were mainly used in the disco elements of the show and provided lighting impact and versatile effects. “The arrangement of the KNV’s on top of each other resulted in a centre line, which in turn allowed me to design either organic-looking geometrics or linear geometrics. Regardless of whether geometric or organic/ figurative, both can be easily achieved with the KNV.” 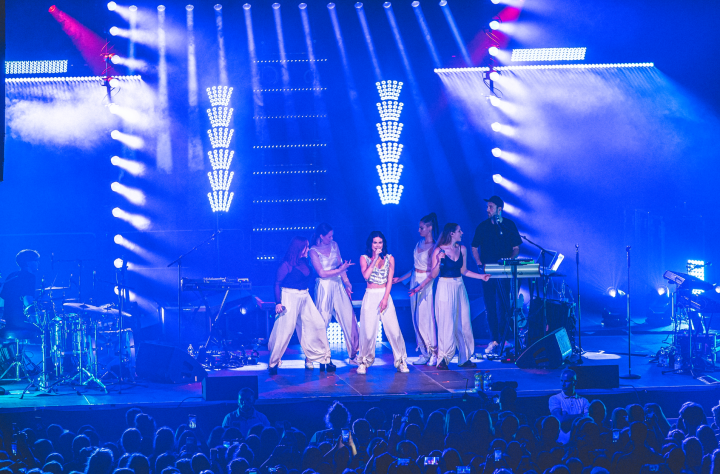 JoJo proceeded in a very similar way with the KNV Cubes, which were arranged in 4×3 blocks in the corners of the stage, as a horizontal row of four under the platform and as a half-high vertical row of four on the left and right of the stage.

The KNV modules were not new to JoJo, as he had already used them at the Kölner Stunksitzung shows last year. In addition, he had given the new KNV Dot a role in his lighting design for Anna Loos. “The Dots do a fantastic job when you need decentralised lighting,” he says.

Since the Lena show contained a lot of dynamism, with both dark and dazzling phases, the designer was able to run the extremely bright KNV to full extent as required. “But star and rain effects can also be easily realised with the KNV and look wonderful,” he notes. “All in all, the systems are powerful tools that can also be used to produce more gentle and sensitive effects. All options are available, and in combination with the FR1 and X4 Bars, the systems were extremely versatile.”

The designer also hung a total of 24 GLP FR1’s on two meters of pipes that were off-axis (2×12 left / right), creating a portal-like impression that framed the events on stage. JoJo, who had already tested the FR1 for a permanent installation some time ago, knew pretty well what to expect from the compact power packs. “The FR1 is a small, light spotlight that can be used to excellent effect in a network. It’s just a great lamp!”