ISE 2020 – the last edition of ISE to be held in Amsterdam before its move to Barcelona – certainly had the odds stacked against it. However, neither the Coronavirus outbreak or storm Ciara were able to impede on the success of the show in terms of visitors, exhibitors and content. 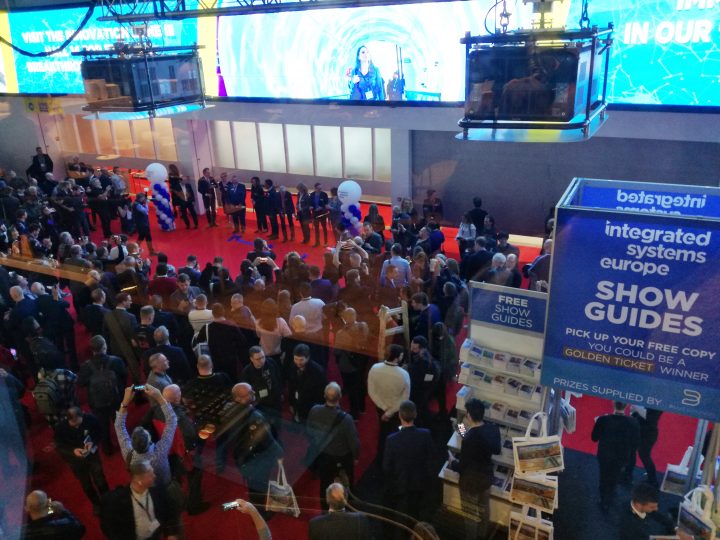 Let’s start, as usual, with the numbers from the fair. Those announced by Mike Blackman during the press conference at the start of the fair spoke of 72 total defections amongst companies, of which 54 were from China, 16 from Europe and only 2 from the United States. However, this was against a backdrop of an increase in pre-registrations by 7.6 % (+6.7 visitors, + 9.8% exhibitors, + 24.8% journalists) and a total of 1318 companies present and around 120 media partners.

The fair hosted Duncan Wardle‘s incredible opening address, featuring a huge projection mapping on the facade of the RAI, to kick start the fair alongside 14 conferences with around 300 industry experts. This year, ISE welcomed 81,000 visitors, who walked on almost 57,000 m2. These are numbers that confirm the primacy of ISE as one of the largest trade fairs in the world. 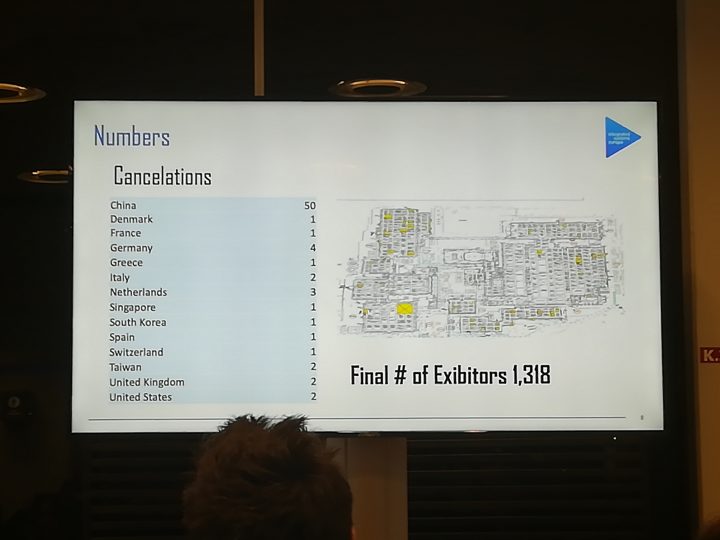 At the base of this success are AVIXA and CEDIA, two trade associations that push the concepts of education and training in a determined way. This is rightly considered to be a priority, in order to establish the skills of the sector and the people who work within it. Both realities provide the visitor with an exceptional experience by defining themes and trends, as well as developing and creating increasingly engaging content. 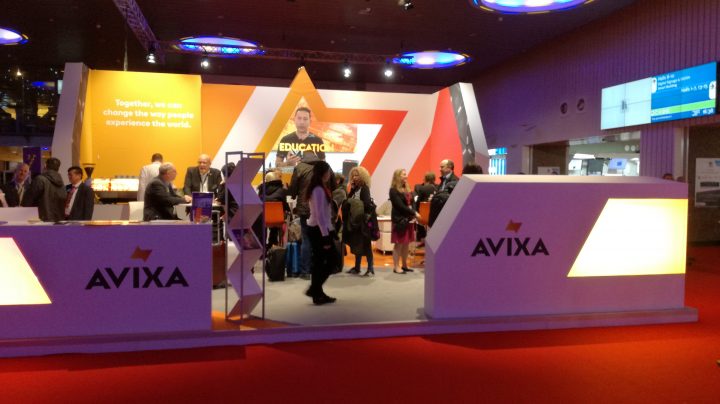 So, what’s next? To Barcelona, ​​a city that will not make you regret the Dutch winter, and and a larger and easier to visit venue with an elevated central corridor that allows quick access to the fair’s various areas. By the way, here’s the new logo!

We talked about all of these updates in an exclusive interview with Mike Blackman.

LightSoundJournal: We are at the epilogue of ISE Amsterdam. Can you take stock of these recent years and provide a forecast on the development of the fair?

Mike Blackman: The fair has grown exponentially and is now around 25 times larger than its inception in 2004 in Geneva. There has been an increase in terms of participation of companies, to become the largest fair in the world dedicated to the integration of AV systems. This is a success for which we must especially thank the city of Amsterdam. Barcelona is the next step that will allow us to grow further, with positive feedback from exhibitors.

LSJ: Duncan’s Opening Address was truly inspiring! It featured an enthusiasm that has spread amongst the various pavilions, despite storm Ciara and the Coronavirus.

MB: Absolutely yes, and we will organise many more events like that of Duncan’s speech. I think the message has been very positive and has had the expected effect, despite the virus and the storm that has caused countless cancelled flights and inconveniences. 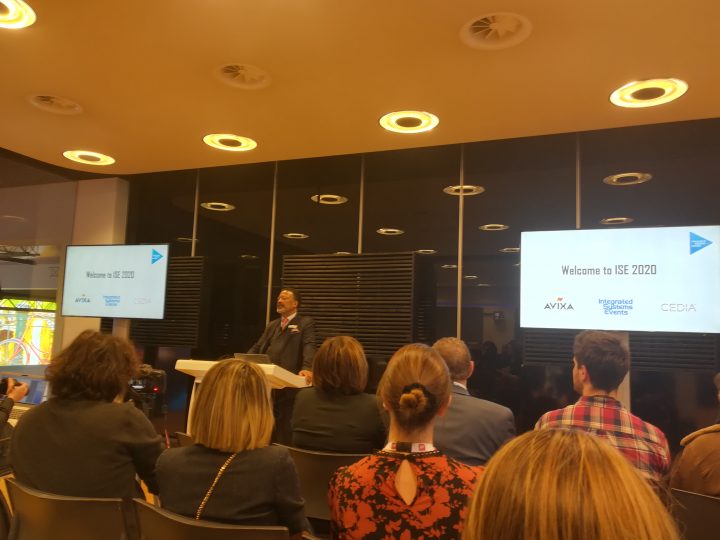 Mike Blackman during the press conference

LSJ: Can you evaluate how ISE was for installers?

MB: The AVIXA and CEDIA associations are fundamental with regards to training, aggregation and direct communication with companies. We need “champions” to make sure that what we do is important, and both associations are helping to train qualified professionals, not only during ISE.

LSJ: Can you tell us about what the move to Barcelona will bring?

MB: We expect growth – we have already seen that just imagining what we will find in Barcelona fills us with positive enthusiasm. Many within the staff have been repeating for a year “Yeee, let’s go to Barcelona!”, making us realise that it was the right choice to make. It is always very difficult to face the new, and what will happen in Barcelona will be much like what happened in the past when we first arrived here in Amsterdam. Building on past experiences, in the past month and last year, we have shown the various companies what our future headquarters in Barcelona will be, giving them an idea of ​​how it will work and how we will work.

LSJ: Will you regret leaving Amsterdam?

MB: I don’t think so, our goal is to always do better and therefore to create the best fair possible every year, regardless of where we are. 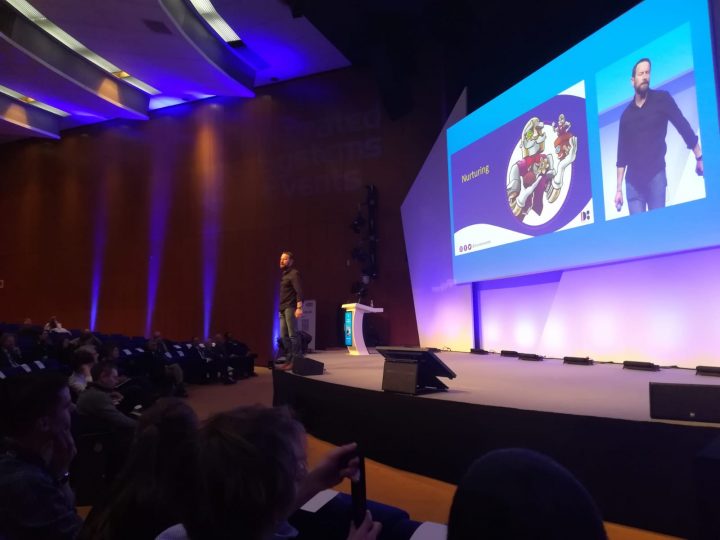 Duncan Wardle during the Opening Address

During the week in Amsterdam, IntegrationMag.it produced 80 live news in Italian, directly from the fair, as well as 7 pre-fair articles starting from December, which certainly enticed visitors and companies to participate in this edition.

Within the various posts there are features and previews of around 170 new products belonging to the Pro Audio, Pro Video Pro, Pro Lighting, Digital Signage, Security, Collaboration Systems, as well as many other sectors. We hope these articles help to guide you in this ever wider, increasingly integrated and increasingly professional world.

Thanks Amsterdam, see you soon Barcelona!

Walter Lutzu has always been clear and sure about tours and adapting. He was, in fact, born in Veneto 43 years ago, his family is from Sardinia, and he now lives in Padova. He is a LD, lights operator and blogger, and has combined training and work goals with the classic Italian motto “impara l’arte e mettila da parte” - learn a trade, it maybe useful one day.