Green Hippo’s Hippotizer Media Servers were chosen by video director Jay Baker of Creative Video Design to drive the visuals for Spotify Presents: Who We Be Live 2019. Performed live at the O2 Victoria Warehouse in Manchester, the Spotify show was part of its award-winning series of events featuring the UK and Ireland’s leading Rap, Grime, R&B and Afrobeat line-ups. 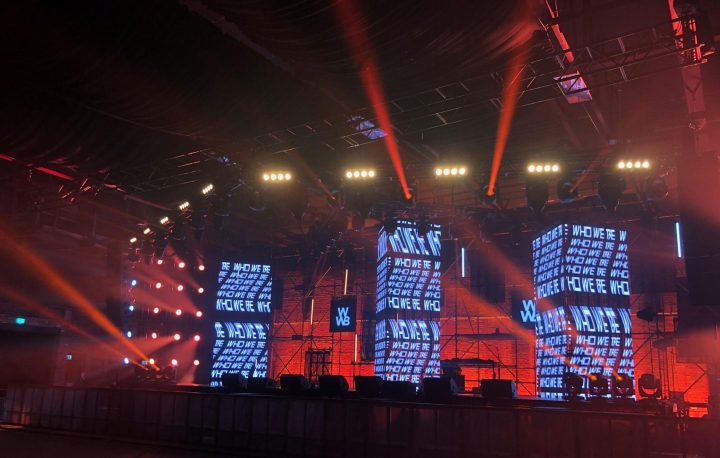 While the venue’s exterior was used as a projection surface on which lighting designer Jon Trincas created some suitably grungy looks, the stage set inside was designed with a grunge/grime warehouse theme. “Our main challenge,” Baker explains, “was to create multiple different looks for the many artists performing, including mapping their own 16:9 format content to screens that were in no way 16:9!”

Baker used Hippotizer Karst+ Media Servers, supplied by 80Six Ltd, as the main playback and backup devices, with timecode playback rig provided by SFL. Baker had real-time access to parameters via Green Hippo’s ZooKeeper interface from front-of-house. “Before the event, we also made use of the Hippotizer PREP dongle at our studio,” says Baker, “which enabled us to prepare the pixelmap setup before we arrived on site.”

For the performance, Baker and his Karst+ delivered visuals designed in-house by Creative Video Design, as well as stings and ident content from Amplify, onto LED screens consisting of ROE Visual’s CB3 and semi-transparent Vanish V8 screen modules, also from 80Six Ltd. “We were adding texture to the show, with three large chevron screens onstage and a scattered pattern of individual panels on the upstage scaffold structure,” says Baker. “We also created Imag effects for the chevron screens using the Hippo’s Notch integration.”

An experienced Hippotizer user, Baker says, “Hippo, as I always say, is a toolbox of a Media Server. The ability of the Hippotizer toolkit to enable us to do multiple things fast is why, for this type of show, Hippo is really the only product we use. The Timecode, the Notch integration and the VideoMapper were all really useful. And using the GrandMA2 to chase video maps is really one of the most under-utilised features of Hippo in my opinion!”

He adds, “Hippo is my go-to system for this type of event. It’s fast and responsive, and great to have where you need a great box of tools!”

A.C. Entertainment Technologies is the exclusive distributor of Hippotizer Media Servers in the UK. Sister company, AC-ET Ireland handles distribution for the Republic of Ireland.