Croatian singer-songwriter and actress Severina WOWed the crowds at four major arena concerts in the Balkans this fall – at Split and Zagreb in Croatia, Belgrade in Serbia and culminating at the Dvorana Stožice in Ljubljana, Slovenia – which were lit by Slovenian LD Crt Birsa who added over 150 Robe moving lights to the lighting design for the three concerts in Croatia and Slovenia.

Crt, whose work is well known internationally – 2CELLOS are among his other current clients – was to light these four special shows for the superstar. Talks originally started back in April 2019 when Severina invited him, set designer Greta Godnic and show director Nejc Levstik to submit ideas. They asked Den Barca of ThenVision to join the creative team and work on the video design and visuals. 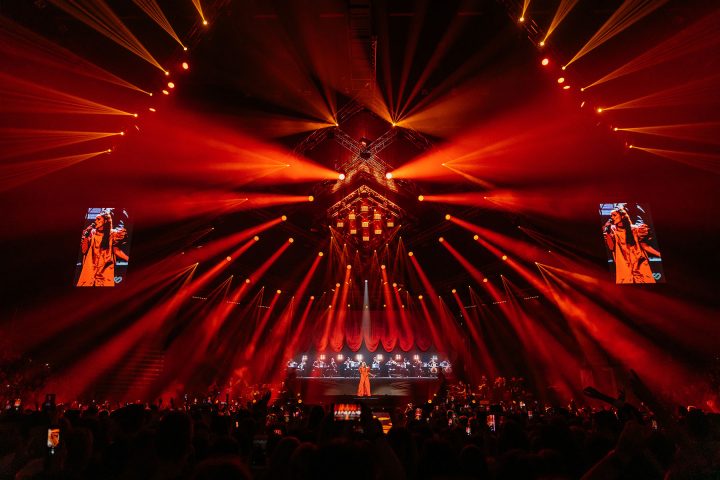 “It was a complicated design and setup,” commented Crt, who was delighted when his initial lighting scheme proposal was accepted. “We had a good brief from the artist about what she wanted to achieve when onstage, which assisted all of us to create a clear and distinctive performance environment.”

Crt and Greta have worked on several other projects together and always present their imaginative lighting and set concepts as one fluid visual entity. After the very first sketches, a diamond shape emerged which everyone liked, and this became a geometric framework from which the set and lighting design developed.

Crt has worked with Robe products for several years and will specify the brand as his first choice of moving light whenever possible.

The lighting rental vendor for the four shows was the IVAS Group from Zagreb, Croatia, a company that has invested steadily in Robe in recent years via Croatian distributor, Sali Trade.

Twenty-two of the MegaPointes were positioned on the main rig – ‘the Diamond’ – with 12 rigged on a ‘chandelier’ flown on variable speed chain hoists that was an integral part of the diamond and moved up and down during the show.

Twelve of the BMFL Spots were also on the Diamond rig, with the other six downstage on the floor. Ideally, Crt would have liked to use MegaPointes for all positions … but not enough units were available for all the shows. 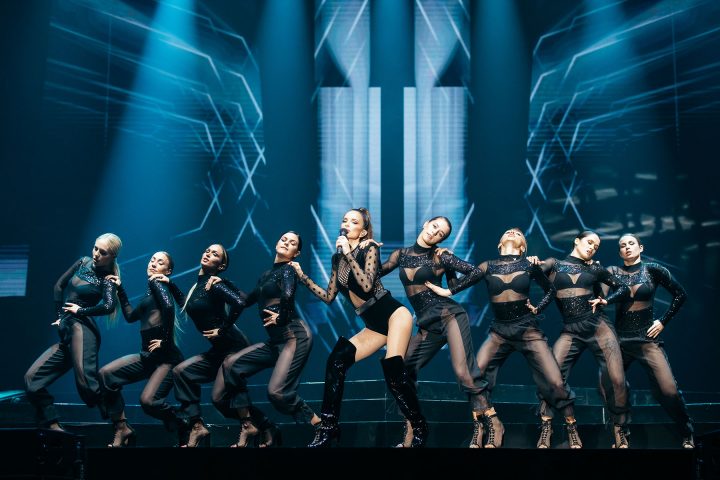 Mega Pointes and BMFLs were his main hard-edged workhorses, chosen for their potency and reliability. “The venues are all big, so we needed something with a good punch,” Crt commented.

He is not a big fan of gobos, but the occasional – distinctive – MegaPointe and BMFL gobo looks did creep in during some of the slower numbers and ballads for which they were highly effective.

Crt loves the way Spiiders, MegaPointes and BMFLs all work so well and consistently together to produce “so much ‘eye-candy’ that’s perfectly matched in colours and quality of light.”

The 24 x Spiiders also flown on the Diamond provided the main stage washes, working in conjunction with 35 of the LEDWash 600s which were the main key lighting for the musicians and performers. Crt needed A LOT of lights to cover the large stage and to help create the very intense colour looks he wanted.

He also likes the option of using the pixel ring effects on the Spiiders.

A further three LEDWash 600s were used as back light for a classic VW Beetle which was pushed onstage for one section of the show, while the remaining six LEDWash 600s were rigged on two ‘between screen’ towers left and right of the main LED screen. These provided coverage for the strings section of the orchestra and were in action particularly during the second half of the show when the LED screen lifted to reveal the orchestra behind.

The 18 x Pointes were positioned behind the side LED screens on three trusses hung one above the other for maximum depth and used for blast-through effects.

Crt admits that he added these Pointes to the rig as a test. The LED was a 70% transparent mesh, and the Pointes behind added another dimension completely to the show’s visual layers.

“In all honesty, we did not know how this would work out until the first setup at production rehearsals, so it was a bit of a gamble, but once they were fired-up for the first time, the Pointes brought that nice element of visual surprise that we’d all imagined!”

Finally, 12 of the CycFX 8s were used to outline the chandelier with the other 12 distributed on the two between-LED-screen towers, and also above the side video screens. The CycFX 8s were all run in single-pixel mode on which Crt commented, “they were great for this task in combination with all the other lights.”

In addition to all the Robes, he utilised two other types of LED wash, some beam movers and a set of 3×3 pixel ‘matrix’ moving heads which were in the centre of the Diamond. 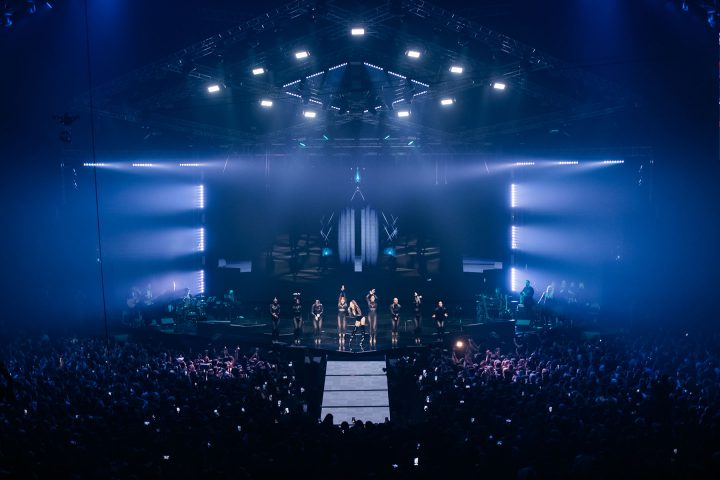 All of these were programmed and run by Crt using his own ChamSys MQ80 console and PC Wing for backup.

On to challenges and time was high on the list. They needed to create special video content and ensure that this, lighting, automation, staging and choreography all worked seamlessly in a modern theatrical performance scenario.

The show was divided into four sections, each painstakingly thought-through, meticulously rehearsed beforehand and slickly presented, all of which involved huge preparation.

Custom video content was commissioned and pre-recorded, and for the live show camera and content mix, Den Baruca was given clear instructions about the look, direction, and colours to assimilate with the other production elements.

Numerous automation cues also needed a careful integration into the action-packed show which started with a ‘fake’ Severina coming onto main stage and then vanishing through a hole upstage while the real superstar emerged on the B-stage at FOH on an elevator platform.

The main LED screen went up and down twice, the first time revealing the string orchestra on a balcony which was part of the staging, and the second time to allow the car to be pushed forward over a gap in the stage from which it and 30 performers emerged.

A ‘magic cube’ set element consisting of a square truss clad with mesh LED with Severina and dancers inside flew in for the song “Fatamorgana”. They were moodily lit with ambient light from the mesh.

The chandelier lowered for two songs and tilted towards the audience, and a 7-metre long table was also flown in and out for two numbers … so it was BUSY!

All this was perfected in five days of production rehearsals in Split before the first show with all departments working furiously to achieve that desired coherent visual look and flowing show choreography.

Some parts of the show had no video, just lighting, and in other parts video was used as a lighting effect, strobing and blinding the audience and creating dramatic silhouettes of the performers.

“Everyone was fantastic to work with and I hope there will be the chance of doing it all again in the future,” concluded Crt, mentioning in particular Lovro Ivas, Damir Sabo and Niksa Medirazza from IVAS and the “awesome” lighting crew with some of the most experienced freelancers in Croatia, led by Josip Knezevic and Dario Katacic.

Once again he enjoyed the dynamics and creativity of working closely with set and stage designer Greta Godnic whose insight “brought so many more alternative lighting, video and show direction ideas to the party.”