The 2020 edition of Anaheim’s NAMM Show has just closed its doors and there is no doubt that, for another consecutive year, the fair has shown a marked growth on all fronts.
Speaking of musical instruments, the gap between exhibitors and the public compared to European fairs is very large. This is a gap that reflects the real situation of the MI market, which is lively and flourishing in America, yet weak and uninspiring in Europe.

In short, this was a NAMM that had not been seen for several years. The figures talk for themselves – with over 2,000 companies present for a total of around 7000 brands represented. All this presented to an audience of 115,888 people that included industry professionals, distributors, exhibitors, technicians, journalists, members of various associations and VIP guests from all over the world. This is a number that represents growth of almost 20% in the past two years. There are also many Chinese companies, which have occupied an entire pavilion with various Pro audio proposals and hundreds of musical instruments. 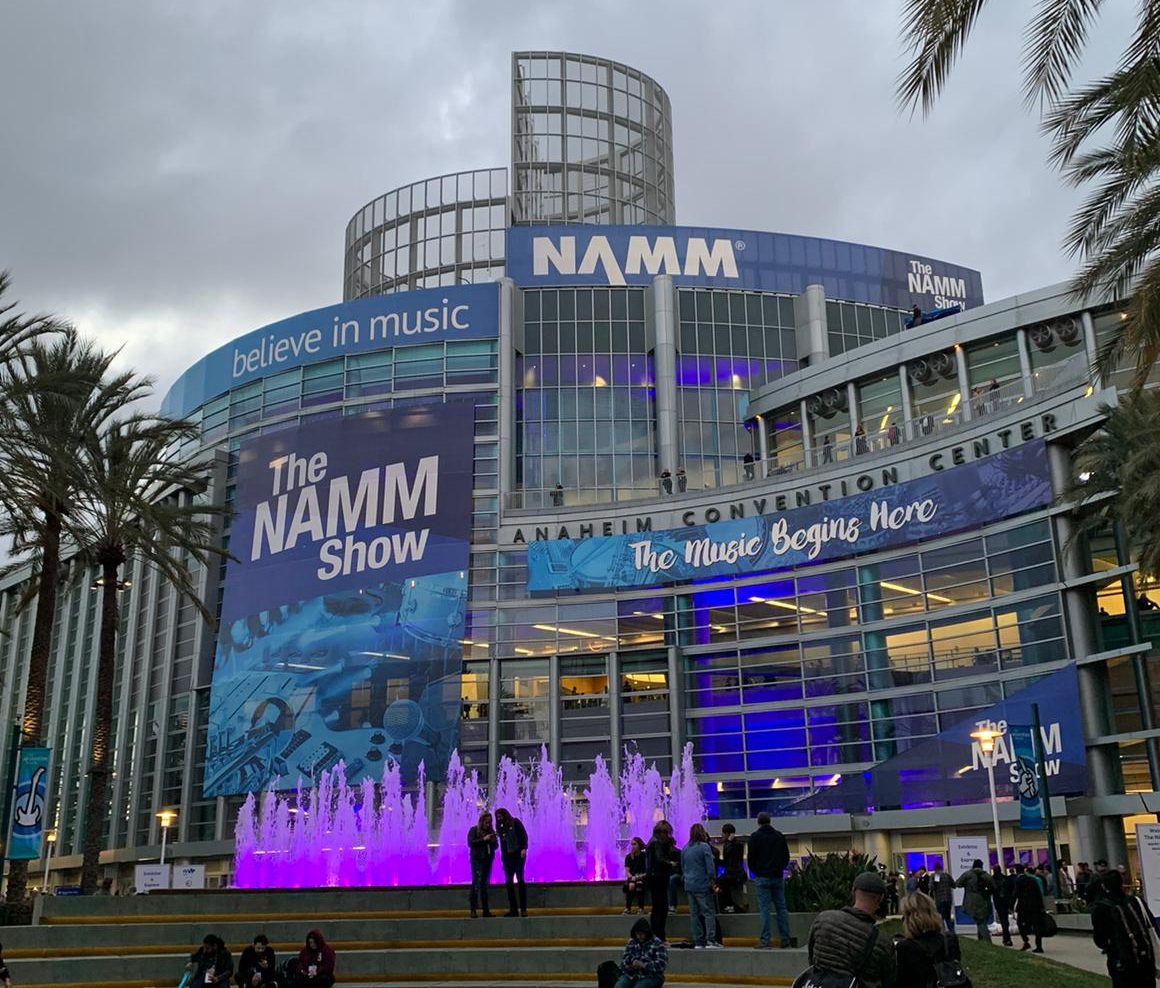 Many educational initiatives were present, not only in the spaces organised by the fair but also within the various stands. Here many companies created mini classrooms where continuous training sessions were held. It is interesting to note that in a sector that has always been populated by men, female representation has been elevated this year, both amongst the public attending and with regard to the various sound engineers and professional producers involved alongside the exhibitors.

It should be immediately said that with regards the Pro audio sector, one of the elements that distinguish this edition is certainly the concept of sound spatiality. This was well represented, amongst many, by RCF D3PTH, an innovative multi-channel, immersive, real-time, object-based audio system – dedicated to live events. RCF D3PTH creates an engaging audio sound field that allows the listener to perceive an expanded stereo image, with greater transparency and intelligibility. The improvement compared to a traditional dual / mono configuration is surprising and well represented within the demo area of the Italian company. 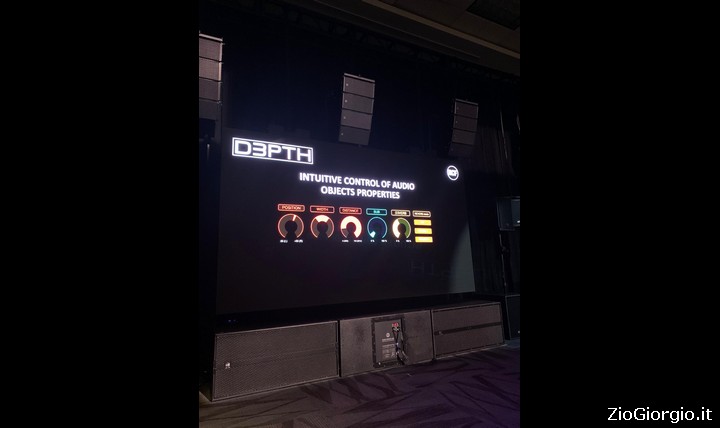 L’Acoustics is also showcasing the Hyperreal Sound of L-ISA technology, which allows artists and productions to offer new multidimensional sound experiences to an audience of all sizes, increasing the sense of proximity and deepening the connections between artist and audience. L-ISA significantly increases speaker resolution to provide a natural soundscape with high intelligibility, which actually increases realism. L-ISA can further immerse the listener with sound from all directions to give the feeling of being “inside” the music.

Genelec brings their new Aural ID technology to NAMM, which allows for a step towards improving the reliability of listening to music via headphones. Aural ID calculates the user’s HRTF (Head Related Transfer Function) by creating a detailed model of the anatomical characteristics that influence hearing, allowing the replication of a more truthful and reliable sound. Until now, the collection of personal information relating to HRTF has been a complex process that requires an anechoic room, the precise positioning of measurement microphones and careful attention to configuration details and procedure. With Aural ID, users can simply use their smartphone to create a 360-degree video of the head and shoulder region. Once the video is uploaded, an accurate and detailed 3D model of the head and upper part of the bust is created, with particular attention to the modelling of the external shape of the ears. 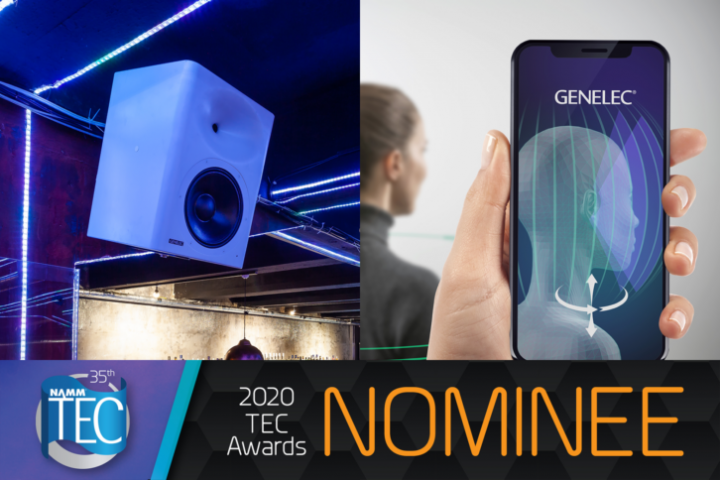 Genelec also presented the new S360A SAM Studio Monitor, which, thanks to an integrated active Crossover and ISS (Intelligent Signal Sensing) technology, offers high SPL monitoring up to 118 dB without compromising speech intelligibility or sound quality. The S360A is suitable for any environment and integrates with the GLM software through which it can be configured and calibrated by compensating for the reflections of the room. 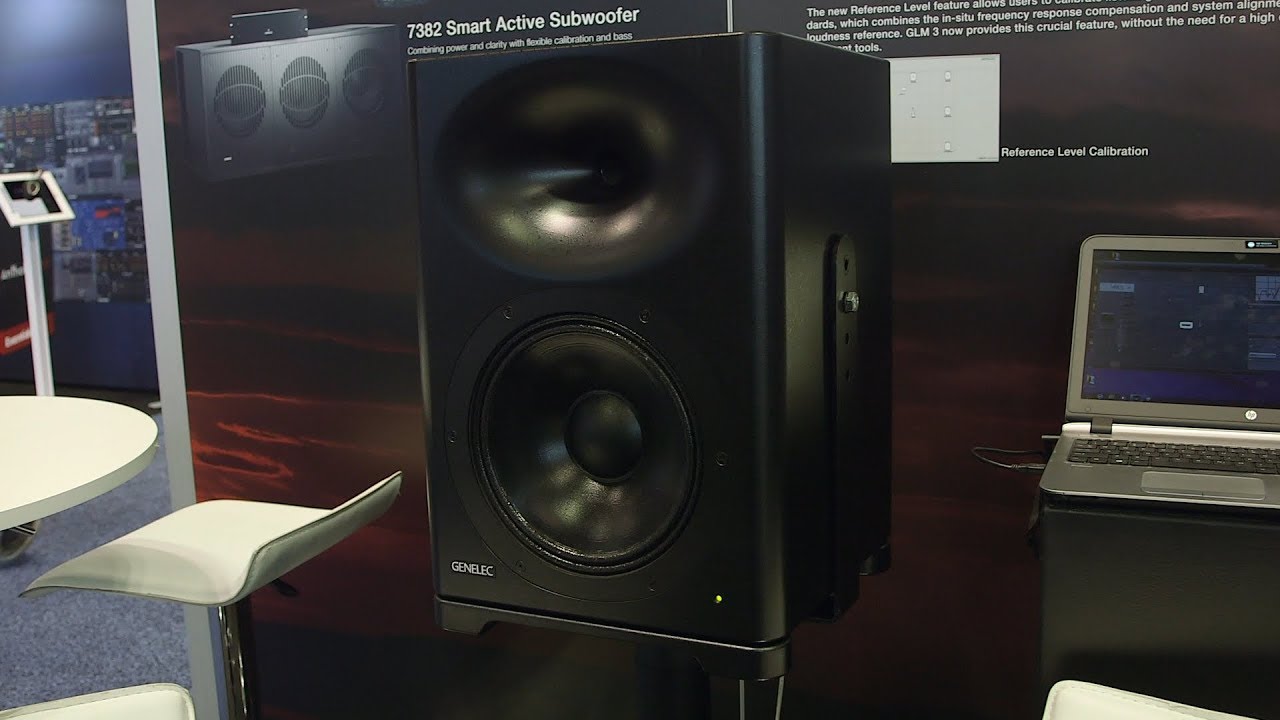 Powersoft has introduced three new series of amps: Mezzo, T Series and X4L. Mezzo, is a new line specifically designed for the AV / IT market, and is made up of eight amplifier models, each with different power and connectivity options. It is an extremely compact self-configuring class-D system, easy to install and with the possibility of being monitored remotely. The eight models available in the new Mezzo line are all interchangeable and consist of four power sizes, each of which offers an option with “A” (analog) or “AD” (analog-digital), which adds Dante / AES67. The models with reduced dimensions of 320W are capable of delivering 80 / 160W per channel in 2, 4, 8 or 16 ohm. 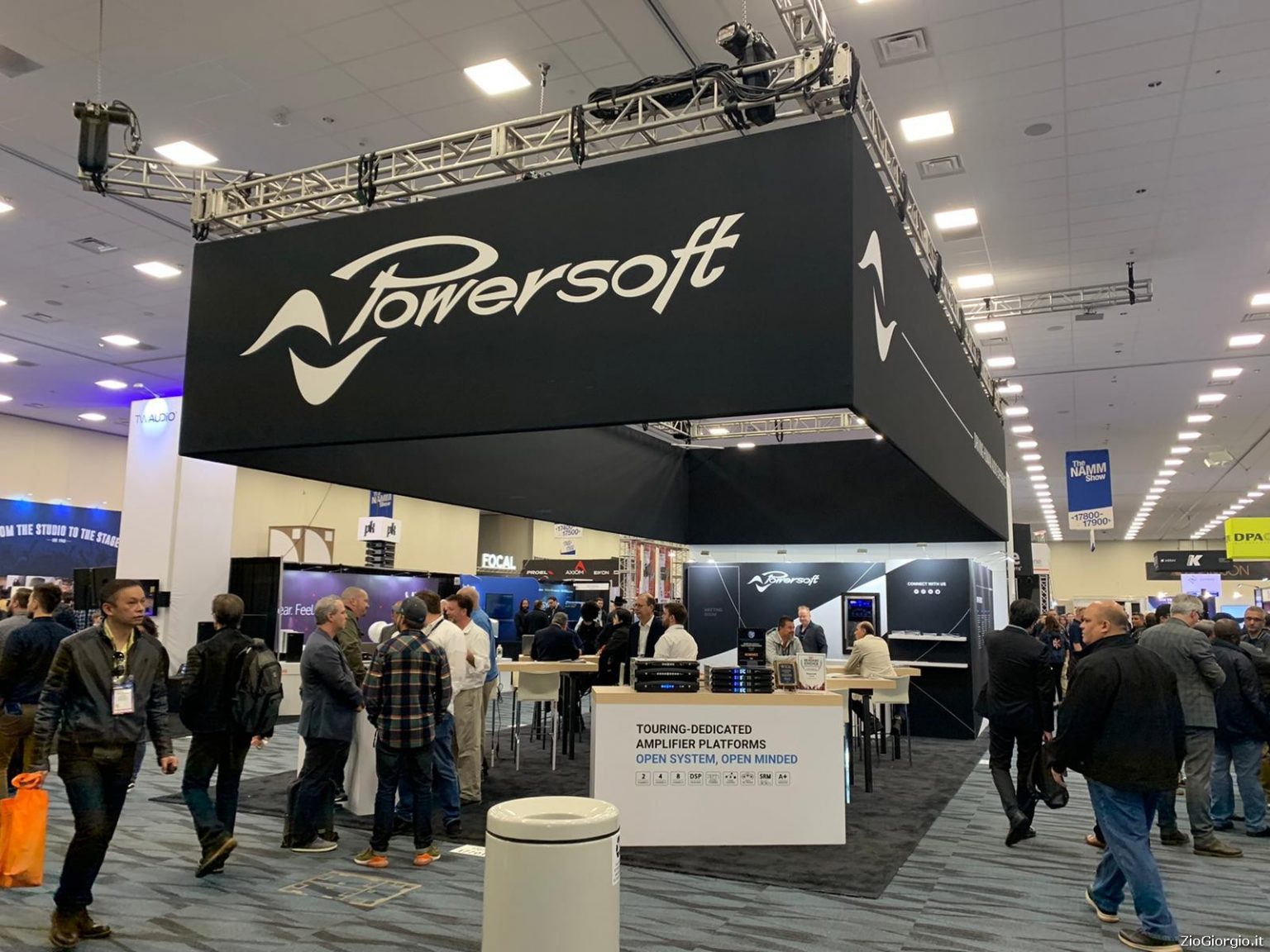 DiGiCo has instead chosen NAMM 2020 for the world preview of the new generation of Quantum mixers, with the brand new Quantum338, which together with Quantum7 and Quantum5 represents a quantum leap in terms of power and connectivity. Quantum338 is based on the seventh generation FPGA system and includes 128 input channels with 64 buses and a 24 x 24 matrix, all with full channel processing. The layout has been completely renewed with three high brightness 17 ″ multitouch screens, which allow the user to view both the meter bridge and the quick selection buttons on each screen. The 32-bit ADC and DAC conversion takes the system to a new level of connectivity and performance, thanks to “Ultimate Stadius”, integrated into Quantum338 as standard, together with six single or three redundant MADI connections, dual DMI slots and an interface of UB MADI USB recording. Adam Hall gave the opportunity to try the new solutions proposed by LD Systems. Among the most interesting products we mention the new MAUI® 44 G2 column active PA system with 1,500 W RMS, 130 dB max. SPL and cardioid speaker configuration are available, which, thanks to DynX® DSP technology, offers distortion-free sound even at maximum volume. The use of aptX ™ and AAC codecs guarantees high resolution audio reproduction for all bandwidth via Bluetooth®, while thanks to the integration of TrueWireless Stereo ™ technology it is possible to activate wireless stereo audio playback from two MAUI® 44 G2. The new series of ICOA® active coaxial PA speakers was also present at NAMM in the two 12 ″ and 15 ″ versions, with their coaxial design with rotating CD horn that allow extremely flexible use of ICOA full range systems thanks to the reproduction of the bass from the horn subwoofers. The BT versions allow wireless streaming playback of entire songs or accompaniments from a smartphone or tablet via Bluetooth®. 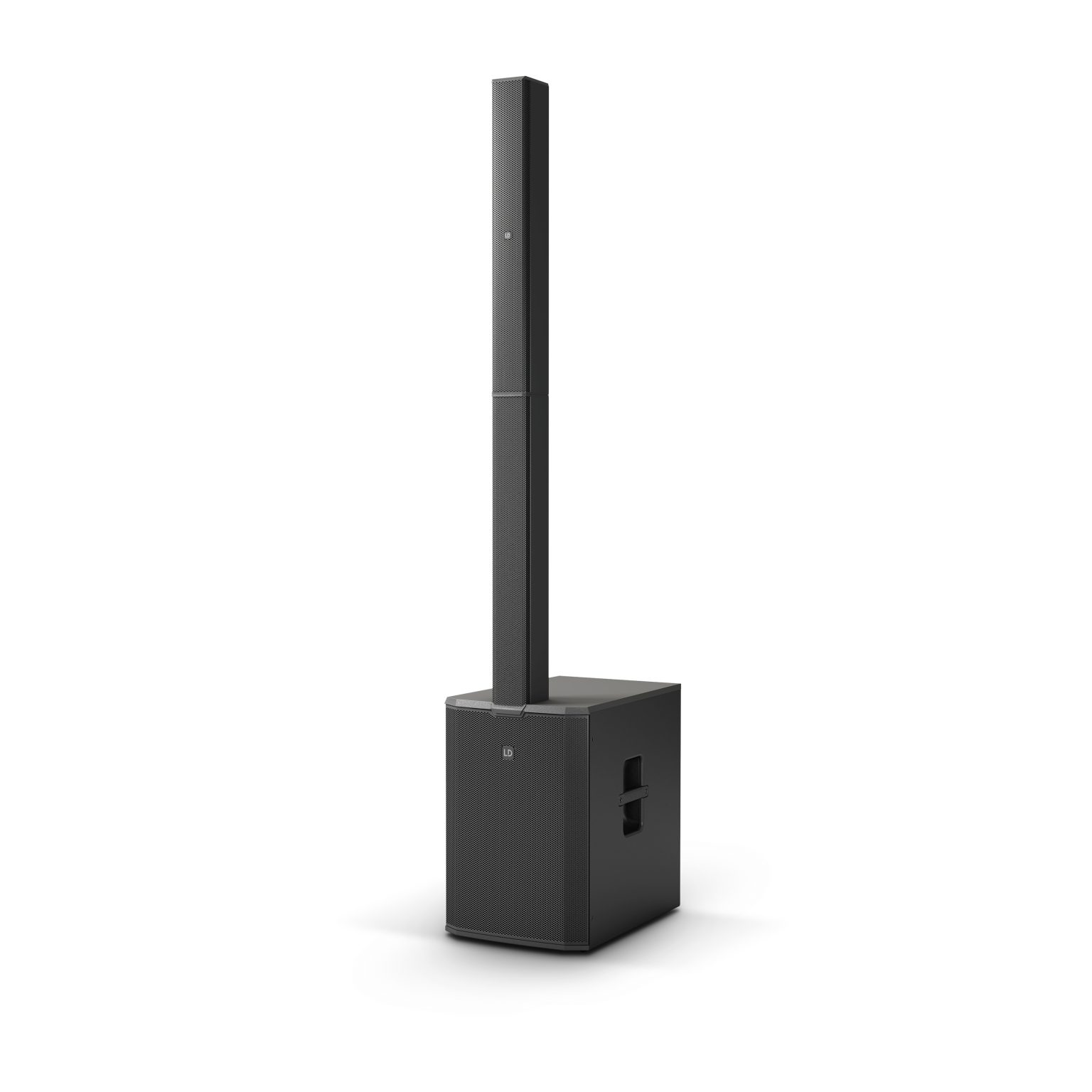 QSC’s K Series of active speakers were inducted into the TECNology Hall of Fame of the Winter NAMM Show. Launched in 2009, the QSC K series is captained by an extremely clean 1,000-watt amplifier in an ABS enclosure that combined a 1.75-inch compression tweeter with an 8, 10 or 12-inch woofer. The line is completed by the 12-inch double KSub active subwoofer. The K series brought both studio-quality sound and powerful, uniform coverage with unprecedented physical weight. Along with its other groundbreaking features such as Directivity Matched Transition (DMT), intrinsically corrected Tilt-Direct technology and versatile DSP presets, the K series made its mark for satisfying what artists and sound professionals wanted from an active speaker. More recently, QSC has introduced the K.2 series, further demonstrating the company’s commitment to maintaining its dominance in the category. 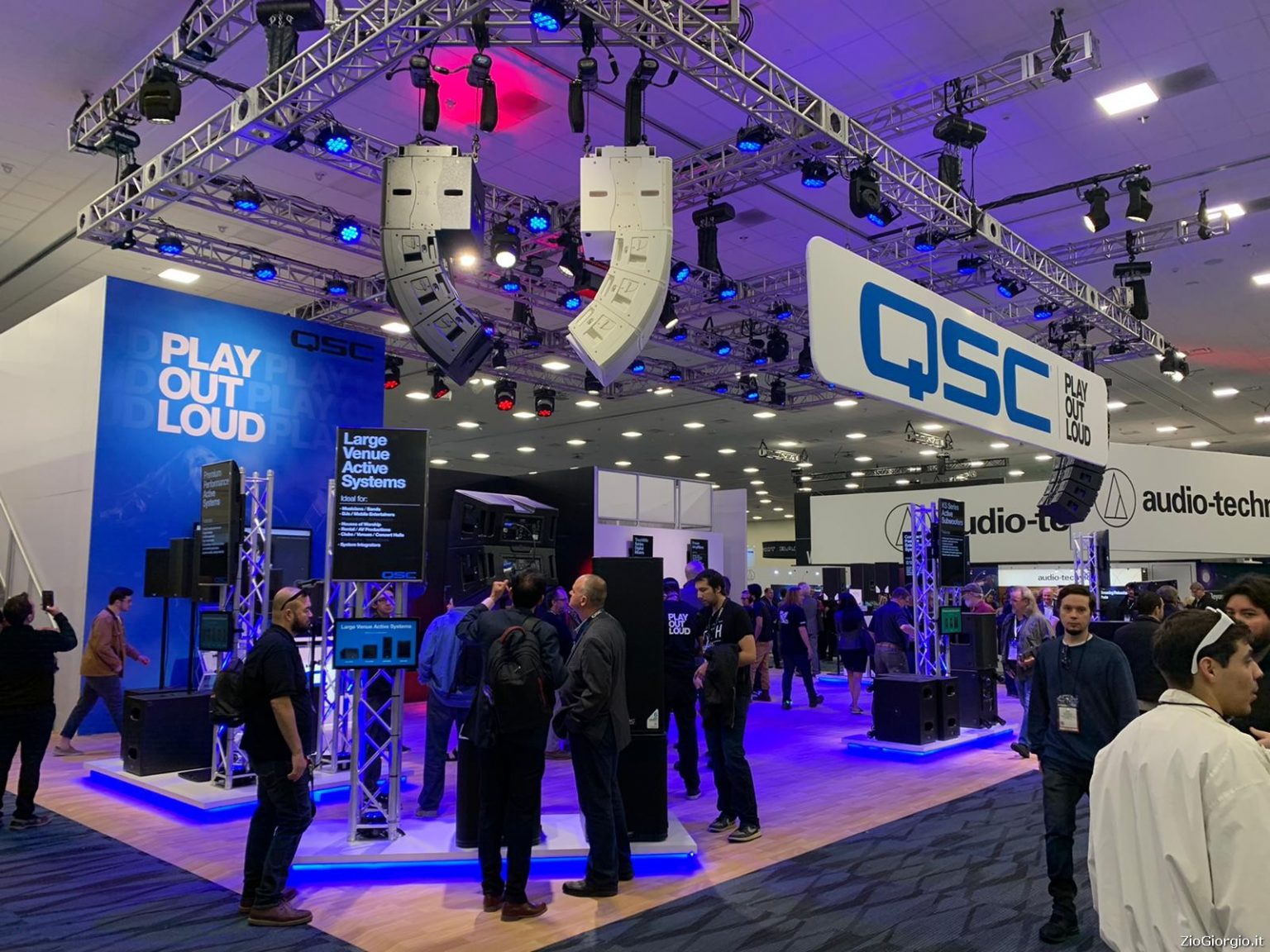 dBTechnologies, on the other hand, presented the VIO Series to the US market with the VIO L212 large format line array, the spearhead of the Series, accompanied by the VIO L210 large format line array and the small / medium format VIO L208. The three systems are completed by the subwoofer of the VIO family, the S218.
In addition, NAMM2020 represents the first public release of the Montarbo brand, after the acquisition by RCF Group which entrusted the management of the same to dBTechnologies. We close the roundup dedicated to companies with the excellent initiative of Adamson Systems Engineering which announced a series of training courses dedicated to partners during a special press conference during NAMM. The program includes a series of Road Shows in collaboration with the partners of the Adamson USA network; an increase in training programs with global certification in the EMEA and APAC areas and the Winding Roads Education Series in collaboration with the AVIXA Foundation, dedicated to students willing to make a career in the world of professional audio.