David Morales is a globally revered American DJ, Grammy-award winning record producer, songwriter and businessman. One of the first superstar DJs to tour the world, Morales honed his skills in the 1980s and 90s at legendary clubs like Paradise Garage, Red Zone and Ministry of Sound, and began a prolific production career that went into overdrive in the late 90s. Producing and remixing more than 500 records for multi-platinum artists including Mariah Carey, U2, Michael Jackson, Aretha Franklin and Madonna, his remarkable career continues to go from strength to strength, showing no signs of slowing down. Still headlining major shows, still delivering high calibre albums and still displaying a hunger for newness, Morales remains as relevant as ever at the forefront of music. 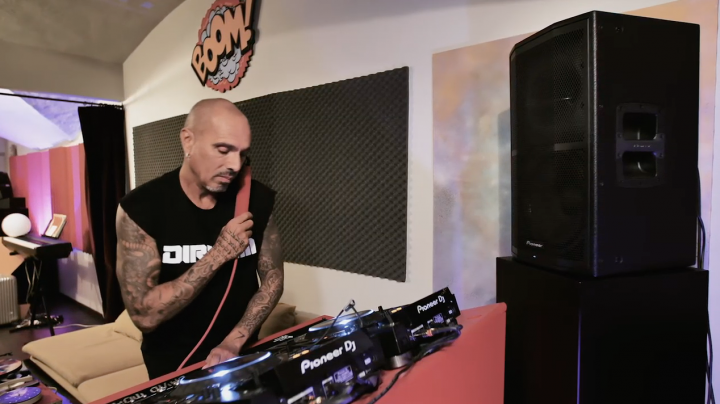 In the studio, unsurprisingly, Morales knows exactly what he wants and is uncompromising when it comes to sound. A key component of his creative environment is a Pioneer Pro Audio XPRS system, comprising 2 x XPRS 12 active speakers and 2 x XPRS 115S active subs. The system supports his DJ set-up in a dedicated space, where he takes new material and is able to accurately reference how it works in the live environment.

Recounting his first experience of the XPRS range, Morales is enthusiastic: “I played in Japan at a bar and they had two of the XPRS 12s and two subs. I loved the way they sounded – I’m like ‘wow!’  That made me pick up the phone to Pioneer Pro Audio and I said ‘yo! – I just heard these speakers – I want them’.

“These speakers are just great out of the box. They have a great reference point to start from immediately. Gain-wise, I really don’t have to play beyond 90 dB and the system probably goes to 130 or more. The subwoofer is only a quarter of the way up, I’m only using the top boxes at fifty percent and there’s still a lot of sub-bass going on in this room. I’m also impressed with the box without the sub because you still get plenty of real ‘bump’ out of it – I’m making club records and I need to understand what they sound like on a club system.”

Adding the XPRS system to his setup is clearly something David Morales feels was a positive move. Always to the point, he concludes, “Sound is important to me to do what I love – that’s to make people dance and make people have a good time. If these speakers didn’t work they wouldn’t be here. I don’t compromise my sound for no-one!”