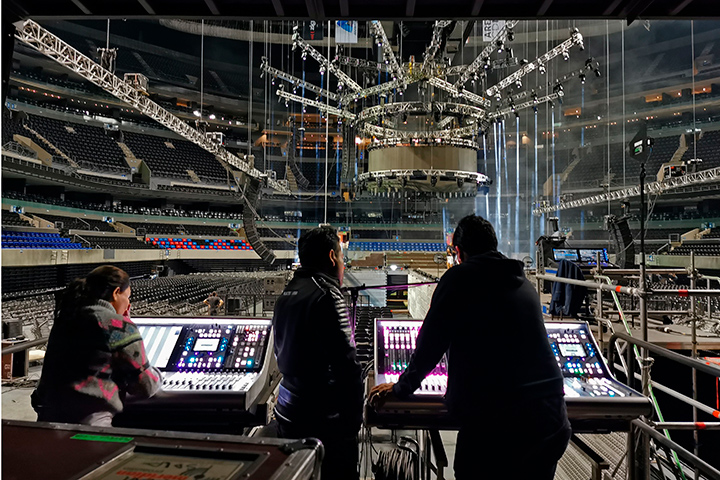 The 90’s Pop Tour is a challenge. As our interviewee points out, this is a tour that can feature with seven groups and bands from the 90s, performing 50 songs over 4 hours. A show of this nature can allow us to see just how complex the job of a monitor engineer can be, responding to the requirements of each artist in turn.

Oscar Tovar is an engineer with extensive experience, who started his work in the second half of the 80s. Since then, he has worked continuously with leading Latin artists – including Rocío Durcal, Ana Gabriel, Jesse & Joy, Cristian Castro and Paulina Blond, amongst many others. Over this time, he has developed a way of working that allows him to quickly respond to the requests of his artists.

In our interview, Oscar gives details of his work on the 90s pop tour and the reasons why he prefers to work with the SSL L500 PLUS console.

LightSoundJournal: How did you get started in sound work and how did you become a monitor engineer? Have you also worked as a FOH engineer?

Oscar Tovar: I started as an audio technician at a company called Abreú Producciones. From there, I went to Audioconcept where I gradually became involved with some bands, which gave me the opportunity to mix in their shows and become a sound engineer for them. Although I am mostly dedicated to monitors, I was also FOH engineer for artists such as Ana Gabriel, Jesse & Joy, Pandora, amongst others. 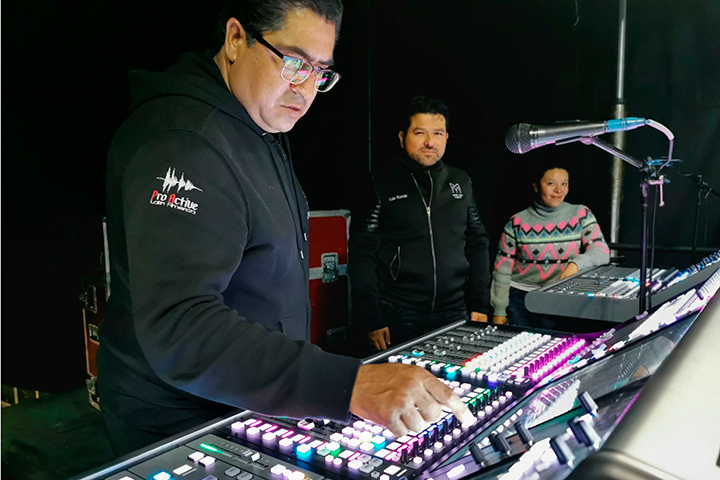 LightSoundJournal: The 90’s Pop Tour presents many singers on stage in addition to the band. What special/different tasks have you done for this tour?

Oscar Tovar: The tour has 30 main singers plus 4 musicians. I also make custom mixes for the individuals responsible for lighting, video, effects, pyrotechnics and teleprompter, and also for drums, keyboards and guitars technicians, plus side fill. To put this in context, it’s worth mentioning that the 90s Pop tour was preceded by the OV7/KABAH tour, in which we did more than 100 shows with 13 singers. I had a meeting with these singers to present the way of working that I considered would work for us; which they accepted. This went on to work so well that at the beginning of the 90’s tour I took the same formula and expressed this with the new artists, who also accepted it. We have had more than 80 shows and everything is running really well.

The show features 7 groups of the 90s – almost 50 songs over 4 hours. This makes the 90s Pop Tour a unique show, truly one of a kind. The proposal I made to the singers was that, in order to avoid wasting time mixing each of them from scratch, I would prepare a pre-mix to my liking to start the rehearsals. From here, each one of them came with me to the console to refine their mix whilst all the other singers were on stage singing or doing their part at the time. When I had refined one’s mix and he/she was satisfied, another singer came with me and we did the same process we did with the first and so on. It should be noted that I already know many of the performers from previous tours and therefore, I knew exactly how they like their mix.

LightSoundJournal: How are the signals distributed to your console and FOH? Do you receive the signals in digital or analog format?

Oscar Tovar: The signals arrive in analog by a snake, both to the FOH console and to the monitor’s. 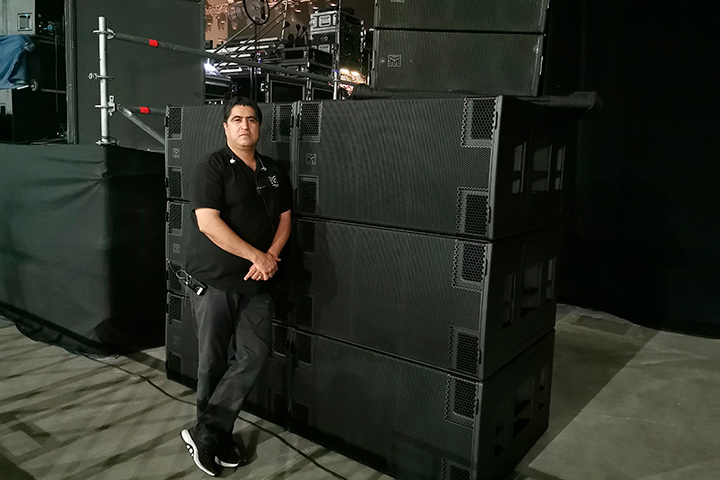 LightSoundJournal: How many input signals do you receive and how many mixes should you prepare for each performance?

Oscar Tovar: For monitors I have 88 inputs, including microphones for Talk Back. I have 42 stereo mixes in addition to 10 spare outputs in case any in-ears fail. It should be noted that the SSL L500 PLUS console makes it very easy for me to use microphones for intercom because I send them through a matrix to my cue and I can listen to my teammates at all times without interfering with the mix of each of the singers or musicians.

LightSoundJournal: How do you organise all the signals? Did you deviate from your usual way of working for this tour?

Oscar Tovar: As a rule, I have always used in-ear mixes in stereo. As for the way of working, I have always worked in the same way and this helps me a lot. I know exactly where each channel and each mix is, which makes my work faster. I make a map of the console in my head – always configuring it in the same way without taking into account what band I am working with. By doing so, I know where I have everything on the console and I can get  to where I want very quickly. This allows my response to what my singer or musician asks for immediate, and they like that. They appreciate me being attentive to their needs during the performances.

LightSoundJournal: What type of processing do you apply to each mix? Do you exclusively use the console’s built-in processors, or do you also use external equipment?

Oscar Tovar: I have the theory that monitor mixes must be as transparent as possible, so I don’t use any processing at the output stage. For vocals I use the native console compressor and reverb 0n each of the 30 voices.

LightSoundJournal: Do the artists use in-ear monitoring, wedges, side-fills or a combination?

Oscar Tovar: Each of the artists has their own in-ear, in addition to the side fills.

LightSoundJournal: How does your work change when you deliver your mix through an in-ear system as apposed to floor monitors?

Oscar Tovar: The mix does not change at all, what changes is the equalisation on the floor monitor. for the in-ears I do not use any equalisation in most cases.

LightSoundJournal: How do you help the musicians who uses in-ear systems to not feel isolated from the context of the concert?

Oscar Tovar: As for the musicians, they prefer to be as isolated as possible. For singers it is very different, they do want to listen to peoples’ reactions and that is achieved with the same voice microphones that are open for each song. In this respect, i’m almost using them as ambient microphones, without contaminating their mix. 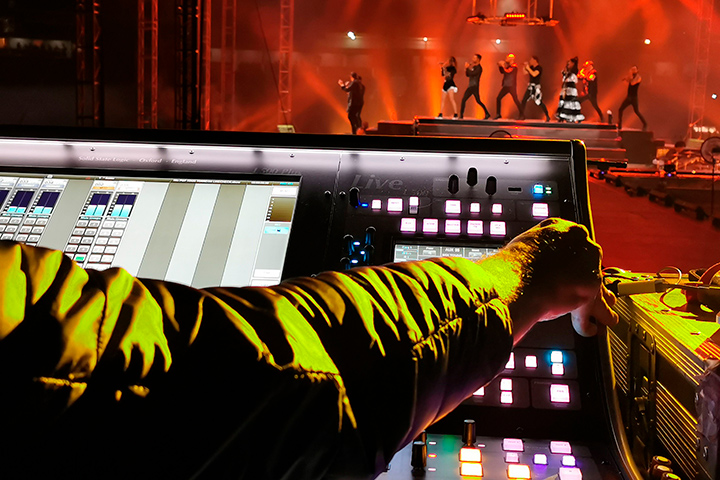 Oscar Tovar: Having no floor monitors means there is always consistency for the in-ear mixes. As it is a 360º stage, we use the subwoofers in cardioid configurations, so the stage is completely clean. This means that the mixes of each of the singers and musicians are always the same.

LightSoundJournal: Do you have a console of choice for your work? If so, why do you prefer it?

Oscar Tovar: My favourite console is definitely the SSL L500 PLUS. This is for many different reasons, such as unmatched sound quality as well as its impressive compressors and equalisers. You feel what you move immediately. What’s notable is the power of both the paths available and the DSP.  I literally use 100% of the 208 paths – full processing. As I mentioned above, I use 88 input channels and 94 outputs and the DSP of the effects I have running at 96%; so there is no more space for other effects.

LightSoundJournal: You have 30 years of experience with very important Latin artists. How has your job changed on monitors during this time?

Oscar Tovar: Through the years, I have always worried most about having a stable gain structure. This is the basis of a quality mix. In the beginning, it was something that I did not pay much attention to. But, as one learns, you look to get better results in your work. Another thing that I have been improving a lot is my patience and being well positioned at a console. This makes your artists feel secure and puts them at ease. 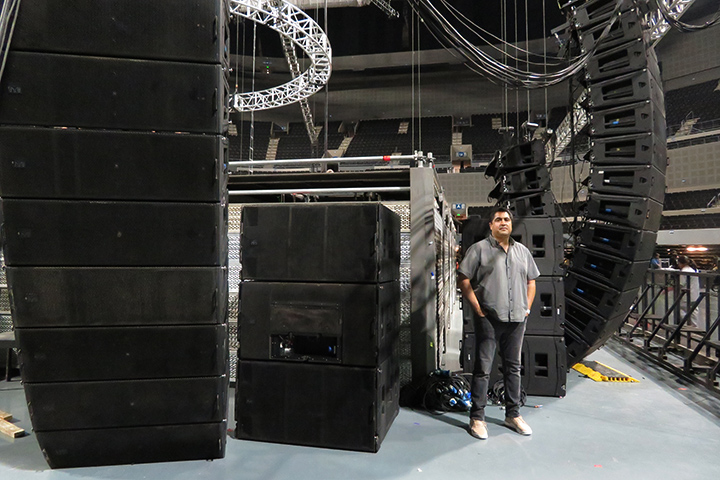 LightSoundJournal: Beyond having a good ear, what characteristics should a monitor engineer own to have a successful career like your’s?

Oscar Tovar: It has always been said that people who mix monitors have to be a bit psychological, and that is true. You also have to learn to interpret what the singers ask from you, even reading their gestures. Something that I highly recommend is to always be aware of what happens on the stage, as you react faster to what you are asked for, allowing you to be better valued. This, of course, helps to accompany a good mix.

Finally, having plenty of communication, both with the musicians and with the singers, will help you better understand what they want from you.