‘Astera LED’ has become an industry buzzword in the last 12 months in South Africa, and no sooner had DWR been announced as the distributor in 2019, then Duncan Riley and the team started making immediate sales to people itching to get their hands on Astera’s range of battery powered LED products. 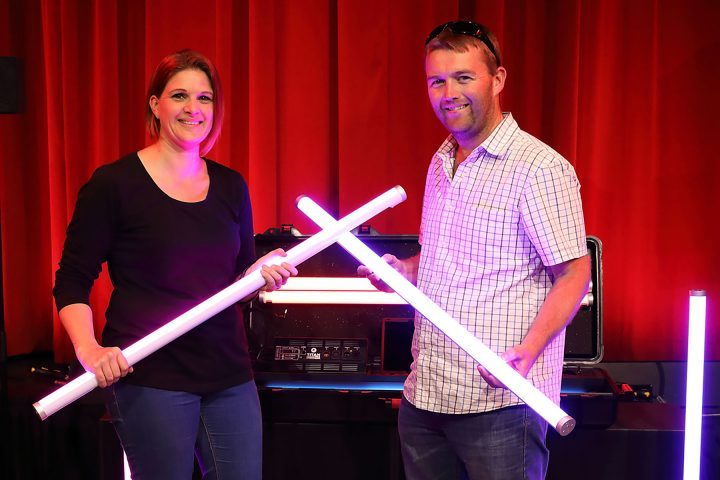 The first sale by DWR in the country was to freelance gaffer Andre Beumer from Just Light It in Pretoria, who works extensively with several leading DoPs and other clients in the film, TV, commercials and video industry.

Andre literally “couldn’t wait” to get his hands on a set of Titan Tubes!

A lot of his work is done on location in dynamic environments around Johannesburg so there’s no studio lighting and every space is different. Everything has to be outsourced for the shoot, and this is a much more exciting way to work as it requires knowledge, quick thinking and the right tools when it comes to lighting.

Andre had used Astera Tubes before on occasions – hence he knew that they were a “perfect” product for having to hand – but these had been available only through other individuals like himself, who had purchased them elsewhere and brought them back to SA! As they were so in demand, there was never any certainty that they would be available, and he was itching to get a set of his own.

No sooner had DWR and Astera struck the distribution deal, Andre was on Duncan’s doorstep, and in fact the 8-way Titan Tube kit was DWR’s original demo kit, which he purchased on the day it arrived in their warehouse in Johannesburg!

Duncan commented: “I always knew Astera was going to be popular, but even I was taken aback by Andre’s enthusiasm. He rocked up, virtually snatched them from us, transferred the money and disappeared in a cloud of dust up the road,” he says laughing. “I think he was straight out on a shoot that day using them.”

“They are totally amazing tools,” confirms Andre who appreciates the incredible versatility.

With the onboard batteries they can be used literally anywhere to bring the right light to a shoot, whether it’s popping a Tube in the corner for some atmosphere, back lighting a subject or key lighting people’s faces for interviews and getting perfect skin tones thanks to the high CRI.

He adds that he’s impressed with the way Astera has thought of every possible permutation that someone might use to mount and rig the tubes – including hand-holding with the ‘light sabre’ handle. A selection of the most popular accessories is included in a neat flight case with the 8 Tube kit.

“You can really work fast on any site with these, utilising a number of smart features like telling the source how long to operate and other extremely helpful things.”

Andre loves the colour mixing, the quality and richness of the light and the fact that the daylight to tungsten scales are “spot on”.

He thinks the App control is flexible and straightforward and great for on-set work where you need to make tweaks quickly and ensure that the team is not waiting on you!

Andre’s future Astera investment will likely be in some the DoP Choice accessories “which make things even more adaptable,” he declared.