Robe was very proud to be a sponsor of the 2019 Signal Festival in Prague, the Czech Republic’s best-known multi-platform event celebrating the exciting and ephemeral fusion of digital arts and technology. 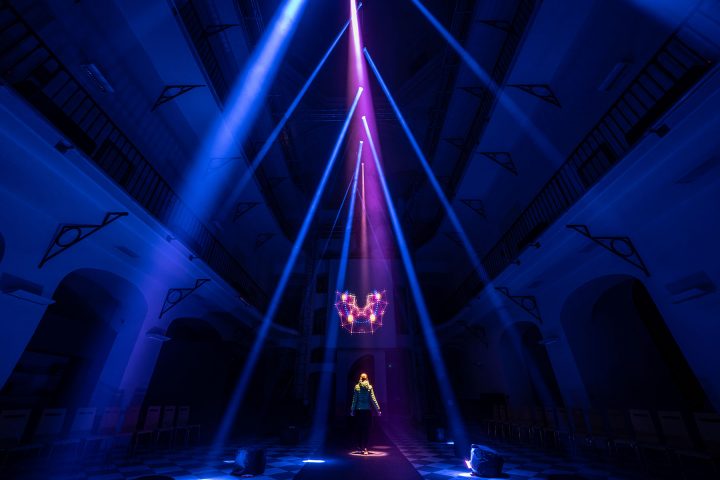 This year the additional resonance of the date made it 30 years since the ‘Velvet Revolution’ which saw the peaceful transfer of power (in then Czechoslovakia) from a one-party Communist system to a modern parliamentary democracy.

To mark this, various festival works touched on the themes of freedom of expression, change, transformation and evolution.

“Simple Harmonic Motion for Lights at the Czech Museum of Music”

The magnificent building, formerly the Baroque church of St. Mary Magdalene, was built in the 17th century.

While the MegaPointes were at the heart of the artwork, the airy interior was low-lit with 8 x Robe Divine 160 RGBW LED wash lights and 14 x RobeStrobes.

Its impressive cathedral-like environs provided the perfect setting for Memo’s ambitious large-scale project which was specially commissioned for this festival. It was the first time he’s combined the mediums of video projection and lighting together in an installation.

Memo needed a high-ceilinged building with the right spatial dimensions in which to stage the piece. As it is also essentially a musical work – the soundscape is created by an algorithm based on computational maths – he thought it a highly appropriate location. 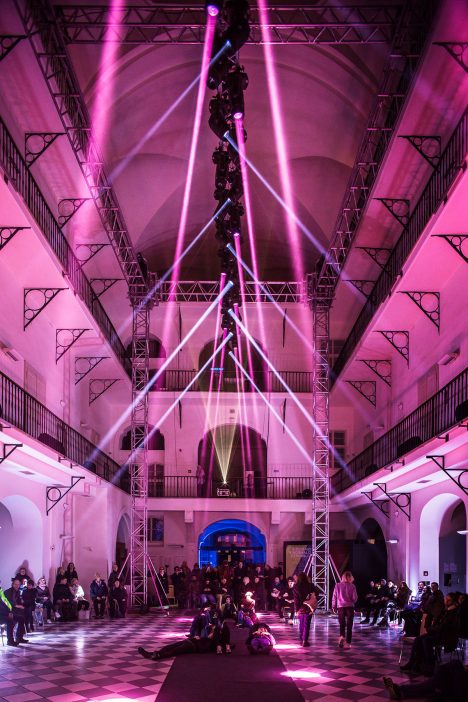 He has developed the custom software used to generate the soundscape and control / trigger the lighting and the projected video content from open source code. Known for the appropriation of advanced electronics, software and hardware systems to create multimedia experiences, mathematics is another fascination, especially in the context of it being a fundamental language of the universe and something that underscores societal base relations.

Memo’s “Simple Harmonic Motion …” (SHM) is a series of site-specific installations that started in 2011 with a combined audio / video installation including live performance by 16 drummers. This Signal Festival presentation was the eighth version of a constantly evolving idea…

“The experience of the piece is very transcendental, so architecture is important,” explained Memo, a fact that makes each design that much more exacting.

He has used Robe Pointes in some of the previous versions where lighting featured. The fixtures have been ideal for producing the sculpting effects and specifically the tight collimated beams of light needed, however this was the first time he’s used MegaPointes, which took things to a new level.

He was delighted with the texture of solid parallel MegaPointe beams, the overall light quality and the extra brightness which proved a bonus in the Museum of Music.

“Simple Harmonic Motion for Lights at the Czech Museum of Music” needed smoke to accentuate the light beams in the vast area, which meant disabling the fire alarms during the opening hours and having a fire crew and tender on standby. Thankfully they were not needed, but all these aspects added to the budgeting and logistics that were crunched by the Signal Organising Committee. Also, due to the value of some of the priceless historical artefacts on display, only water-based haze could be used.

The MegaPointes were rigged on a central truss supported by a 4-legged ground support, 11 metres high and 18 metres long, which enabled Memo to maximise the airspace and get the line of MegaPointes in an optimal central position.

While most of the lighting looks were in variations of white, a few blips into other colours were highly effective, so having a unit with CMY colour mixing helped these smooth transitions. 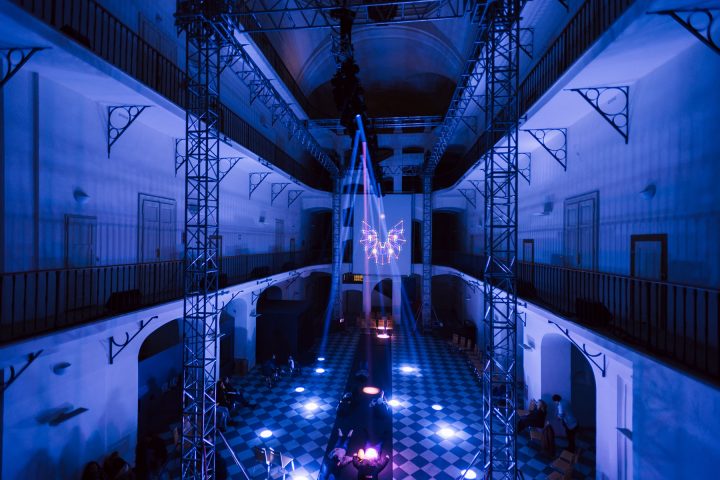 Prompted by the algorithm, the light beams swung gracefully around the hall like giant pendulums, all slightly out of sync and running at different speeds and trajectories … but every five minutes the algorithmic timing was tuned to sync all 32 MegaPointes, bringing them into unison for a split-second.

At that point, the RobeStrobes and Divine 160s grazing up the walls momentarily emitted a strong strobe-like flash highlighting the whole interior – a surprise element that was not at all intrusive. If anything, it drew attention to the offbeat rhythm of the motion.

The first visual element seen by the audience on walk-in was the liquid fractal geometry and patterns made by the video projection onto a screen in an elevated altar-like position on the wall opposite.

The contemplative atmosphere was designed for people to lose themselves for as long as they wanted – and clear some headspace.

Memo was pleased with the turnout and to see so many enjoying the overall peace and tranquillity, spending time reflecting and, in some cases, returning to experience it again.