The RTI PIKO RGB 28 has been released by Ray Technologies GmbH as the flagship product with the latest RTI laser module generation. “This new laser module technology really changes the way professional laser systems are built. The compact form factor and the great visibility combined with the quality of the beam profile make those new laser systems stand out even more” states Jordi Luque, Head of R&D at Ray Technologies. 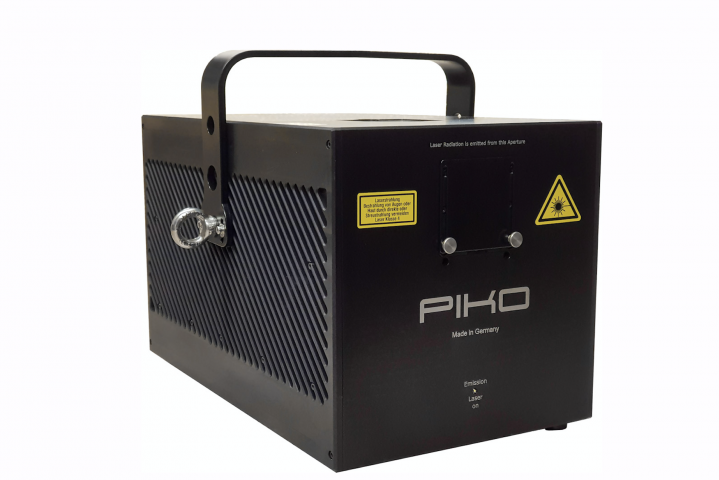 Competing products use the currently common module setup that results in rectangular or ellipsoidal shaped beam spots with different divergence values for x- and y-axis. This leads to significant colour shades the longer the projection distance is, which negatively influences of the quality of the projection. The new RTI diode modules are designed in a way to keep both spot size, as well as divergence equal on both x- and y-axis. This is significantly advantageous over solutions used by competitors which have a very good divergence on one axis, but a bad divergence on the other. The projection spot of competitors’ products will get far worse the longer the projection distance is – and the shade of white changes over distance too, as the beam creates an oval or stretched rectangle instead of a dot.

The beam specifications of the new RTI PIKO RGB 28 are given with only 4mm diameter and less than 0.9mrad divergence – which applies to both axis, so it’s an actual value not an average and provides higher quality results than specifications with mixed calculations. The extremely small beam diameter allows for the use of very small 4mm mirrors, which results in reduced inertia and thus very good scanning performance. 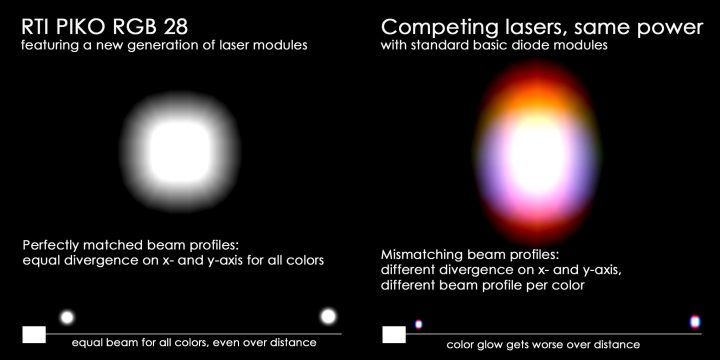 The power of the laser system is surprising too: 28.5W total power after aperture, 8W red at 637nm, 9W green at 525nm and 15W blue at 455nm make this device extremely bright and punchy. By using slightly different wavelengths per color, visibility significantly increases too.

This new laser module generation adds another advantage to the RTI PIKO 28 device: The modules are built in a way that there is no need for realignment any more. Each module is built encapsulated and sealed, so the modules are completely maintenance free. The form factor of the new modules is standardised, like with the well-known Coherent OPSL heads, and thus can easily be combined and fit into slot-type housings. They fit into OPSL head sized slots.

In general the new modules add a lot of additional performance to the new generation of RTI laser systems but prices stay the same.