Dance music fans returned to the O2 Arena in Prague, the European temple, original home and spiritual heart of ‘Transmission’ – one of the world’s most popular Trance parties – to enjoy an exciting line-up of Ferry Corsten presents System F, Blastoyz, Darren Porter, Thomas Coastline, Giuseppe Ottaviani, Key4050, MaRLo, Cosmic Gate and many more getting everyone into the groove for 10 hours of non-stop Trance heaven. 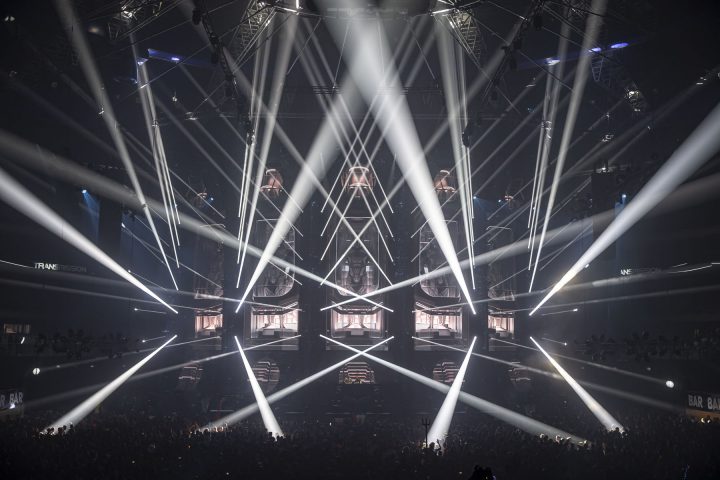 Adding to the celestial magic was lighting designer Bas Kemper, who likes a dynamic and flexible palette of lights. For this show his spec featured over 100 Robe moving lights, with 72 x MegaPointes, 19 x BMFL Blades and 48 x LEDBeam 150s incorporated into the rig, producing an eye-catching collage of colour and action.

Bas works closely with a diverse team including visual artists Vision Impossible who develop the show narrative and create all the screen content – to bring the production alive, uniting all the technical disciplines of lighting, lasers, video and staging. This year’s concept featured a semi-circular stage design – which Bas had conceived earlier in the year – and a storyboard based around the universe, space travel and exploration – a theme that emanated from the physical stage design, and a theme that moulds comfortably with the ever-evolving world of Trance music.

Lighting, LED screens and lasers for the show were delivered by Slovakian rental company Ministry Rental Service, owned and managed by Rudo Tucek. The event was production managed by United Music’s Anco van der Kolk who is also Transmission’s founder.

Large LED screens and elaborate décor have always been prominent at Transmission events since the event started in Prague 12 years ago, and this year there were five prominent portrait-orientated LED screens following the convex arc of the stage that gave Bas the starting points for his lighting layout.

The main goal, in addition to creating the best and most trancey atmosphere, was to ensure that everyone around the 270-degree viewing angle created by the stage had a great view, and could see and experience the effects from all around the O2 – not just because they happened to be in the centre or in the VIP balcony!

The other major objective, as with all large venues and a dance atmosphere, was to make the vast space of the O2 Arena intimate, clubby and community orientated to fit the underlining ethos of community associated with Transmission’s parties. 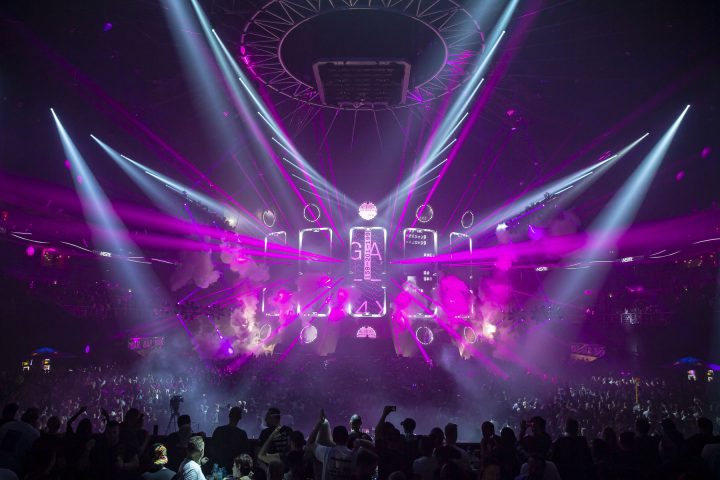 72 of the MegaPointes were rigged in between the screens in 12 vertical rows of six.

Bas specifically wanted lots of lumens blasting out some serious firepower from these positions that was totally in-the-face to build a potent and intoxicating atmosphere.

With the almost infinite combinations of potential MegaPointe effects, the lights were ideally placed to do this, changing the character and feel of the room with their extensive range of options.

The 48 x LEDBeam 150s were all rigged in four long trusses that traversed the side of the stage. They were arranged in square-shaped arrays of four and were used for lots whizzy effects – for the tiny size of the fixtures, the beams stood out dramatically as they grazed over the audience and to the back of the first tier of bleacher seating.

A general lighting task for every Transmission party is to keep the energy and impact pumping for many hours, so fixture placement for each design takes time and consideration.

“I love the power, colours and flexibility of all these Robe fixtures,” commented Bas, who has been adding more and more Robe to his lighting plots in recent years.

As well as lighting the stage and the audience, for this event he specifically had lights rigged on top of the four long house trusses which could be pointed to the roof and work in the ceiling void – and often overlooked area! Especially the O2 is suited for this because of its height.

For a show like this – where their stage also had to accommodate an ABGT350 (Above & Beyond Group Therapy) show the previous evening – Bas explained that he generally plays 80% ‘safe’ in the lighting design doing things he knows will work visually.

The other 20% are reserved for doing something different in the name of art, and to keep pushing the boundaries forward! This year it was developing the concept of the ceiling / roof lighting. 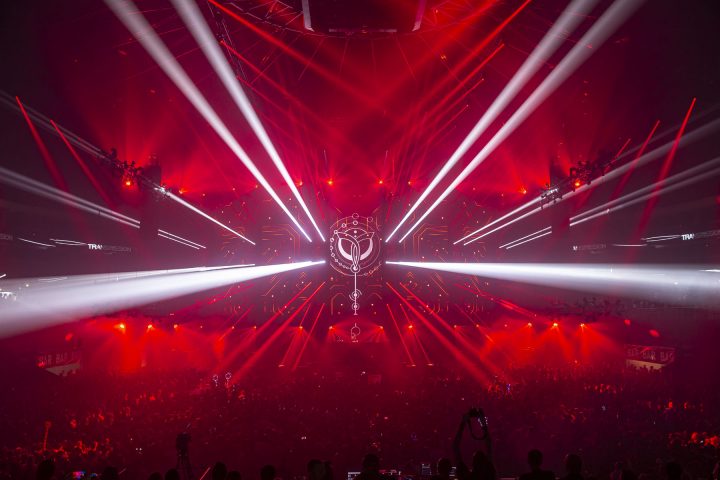 “This really paid off … it helped with creating an inclusive and all-encompassing atmosphere with a good but not massive array of lights.” Having received a great reaction and lots of positive feedback on this approach, they plan to take a similar path again for the Australian event in February 2020.

In addition to all the Robes, he utilised around 400 other lighting fixtures – some more moving lights, strobes, blinders, LED floods and some good old active Sunstrips together with shed loads of MDG haze.

All of this was used to provide the vibrant college of pacey looks and scenes that kept pumping throughout the night, operated by Bas’s regular FOH lighting team of Zis Ankone and Martijn Deenen.

The core Transmission production crew have now been working together with Anco since the first event so it is a very harmonious process when they start formulating a show, with lots of imagination, ideas flowing and “a good creative language,” says Bas, adding that they all continually push one another to reach new creative and technical heights.

Having said that, the diversity and international make up of this team which also involves many different characters and approaches makes for some lively collective discussions and ideas.

Also vital to that equation is Xavier from AVM who co-ordinates all the SFX, plus Rado and Adam from Ministry who look after some truly spectacular lasering which is one of Transmissions’ visual MO’s.

Being a trance phenomenon, audio is also massively important, and Transmission’s live show sound is designed by acclaimed Czech DJ Driftmoon (Juraj Klička) who also composed this year’s Transmission anthem, together with Giuseppe Otiviani. At the O2 they used a fantastic sounding Function One system supplied by Audio Plus.

The next chance to catch a Transmission spectacular is in Sydney Australia in February 2020.