Immediately after Brown Note Productions, Inc. acquired a fleet of IP-rated lighting from Elation Professional in September, the full service production company sent the gear out on a three-week festival run in Louisville, Kentucky, providing non-stop lighting on three Danny Wimmer Presents festivals – Hometown Rising and Bourbon & Beyond, as well as Louder than Life, the biggest rock festival in the U.S. in 2019. 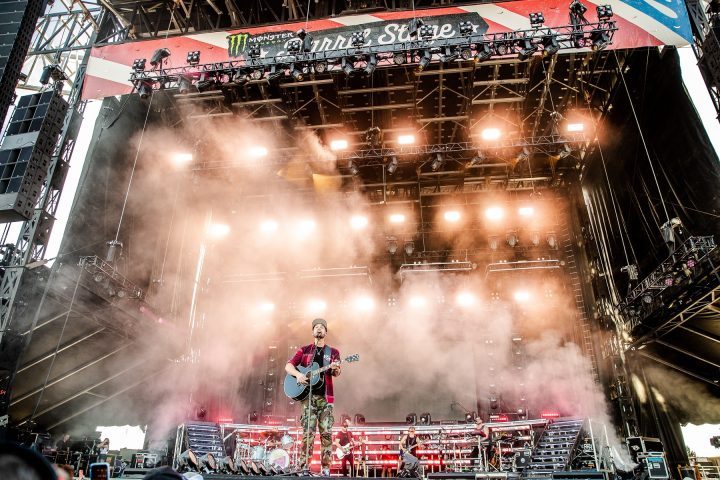 Brown Note has been supplying production for Danny Wimmer Presents festivals since 2014. At this year’s Hometown Rising, September 14-15, lighting designer/director AJ DiCarlo used the new outdoor-rated lights for a performance by country pop singer Brett Young and was happy to have the all-weather rig. “As a touring LD who came into this rig, I loved having all IP65 fixtures,” the LD said. “There was no downtime having to fly in the trusses and bag/unbag the fixtures because of rain. Also, because these fixtures are IP65, the techs from Brown Note were not having to fix them because of dust or rain getting into the lights. I hope and am expecting to see more and more festivals and outdoor venues getting these Elation fixtures because of their IP rating and quality of the fixtures!”

A new multi-level set design by the Golden Boys not only allowed Brett Young and the band to interact with each other during the entire show, it allowed for lights to be placed all over the set. Along with lights built into the set, DiCarlo employed a house air package of 38 Proteus Maximus™ LED profiles, 24 Proteus Rayzor 760™ LED moving heads, 20 Protron Eclypse hybrid LED lights and 16 DTW Blinder 700 IP™ LED blinders.

DiCarlo has worked with Brown Note on several occasions and says he always enjoys working with them and their crew. “They are a very professional group of lighting designers, engineers, and techs who made the day super easy.” He thanks the entire team at Brown Note, especially “the FOH team who got every LD into the house system with no problems!” He also acknowledges Will Flavin, who programmed Brett Young and made a show file that is easy to clone into any size venue or music festival the touring LD works.

The outdoor-rated Elation rig then moved on to Bourbon and Beyond, September 20-22, where LD Bobby Mathias reinforced performances by Leon Bridges and Nathaniel Rateliff & the Night Sweats.

“I relied entirely on the beautifully executed Brown Note festival rig,” states Mathias, explaining that as has been the theme for both acts this summer festival season, they took the stage at around sunset as direct support for the headlining act. “With it being light out still, I have a special version of each show file that steers away from my usual settle, theatrical looks and relies more on bigger, eye-candy crowd focuses that are more impactful in these scenarios. The DTW Blinders and the Protron Eclypse really played well with this execution in hopes of keeping a hot, weathered festival crowd engaged and energized.” 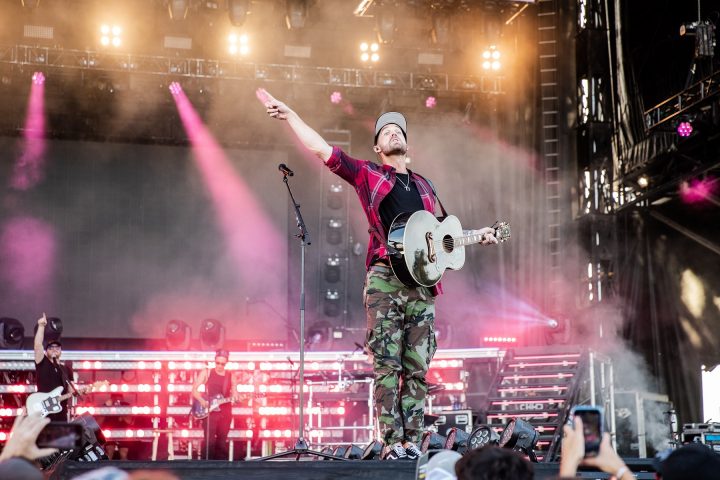 Although the skies were clear at this year’s Bourbon and Blues, which is not always the case, Mathias found reassurance in having an all-weather rig. “The peace of mind alone in an outdoor festival scenario with the new vast improvements in IP65 products gives us all an added level of confidence and line of defense in what is always a trying scenario,” he says. “With more and more festivals coming online each season and weather getting more and more unpredictable, I think the IP rating is going to become the industry standard. I have been doing this for a little over a decade now, and I have more than a few war stories of the stress, cost and shows that have been cut short by inclement weather where the new IP technology could have painted an entirely different picture.”

Mathias is grateful for the role Colorado-based Brown Note has played and the personnel he has come to rely on. “I can’t state enough how much Brown Note has been there for me this summer. Residing in Denver myself when not on the road, it has been a joy to reconnect with Ryan and Sara and meet their current roster of absolute all stars. Coming on with Nathaniel Rateliff earlier this year brought me back in the Brown Note orbit as they have been using BNP since the start for audio and lighting. I was lucky enough to come in and work with Sean Ginsburg who is one of the most dedicated, knowledgeable and beautiful human beings I’ve ever met in this industry. He heroically covers the LD position for Nathaniel Rateliff when I have to bounce back to Leon Bridges, which takes composure and grace.

“For Bourbon & Beyond, the BNP crew were organized with all the advance plot, patch and fixture profiles for all of the new Elation fixtures ahead of the game. I can’t begin to explain how big of an asset this attention to detail and extra love makes a difference to us touring LDs who during festival season have an extreme amount of data/show management on our plates day in and day out. The team not only had the rig at 100% working order but had gone above and beyond to welcome incoming LDs with the calm, cool and collected atmosphere I’ve noticed seems to be the Brown Note calling card. It means so much going into festival situations when you know a company and people of this caliber have your back.”