The recent European tour by a-ha saw the introduction of 10-bit video into the world of concert touring. A brave step by a-ha some might say, but for the industry one that was long overdue. 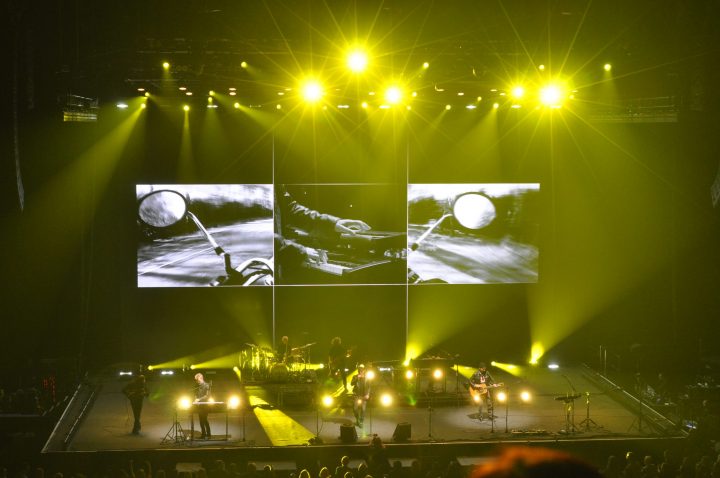 Not that this was an easy process, the standards expected were exceptionally high, not least dictated by the fabulous content produced by the band’s chosen video creative, Knut Helgeland and realised live by the equally talented Icarus Wilson-Wright. Alex Leinster of Video Design, who oversaw the upscaling of technological standards, outlines the challenges.

“There were three important issues to be addressed

“Icarus had obviously been thinking about this for some time; I think the content he saw being developed by Knut was so beautiful that he felt this was the ideal opportunity – that the result would entirely validate the effort and expense.”

Wilson-Wright had already identified that two server types were 10-bit ready and could provide the platform; Disguise was chosen and Video Design promptly invested in a pair of the latest Disguise gx2c’s.

The rendering of Helgeland’s content proved a little more difficult, timespans required to do the work initially appeared intractable. Wilson-Wright spotted a codec within NotchLC that provided the lifeline. “The key to LC is quality and accuracy and it’s very fast to encode or decode,” explained Leinster. “These are not the smallest files, but because with the Codec, as with all else about Notch is GPU based rather than CPU as many other such tools are, the process became much faster and easily manageable.” Infrastructure saw major changes. “For several years now, we have all become accustomed to running HD,” said Leinster. “In some ways we have become blasé, you can just do something like run a 20m HDMI cable and it will work fine; we’re never really stretching the capacity of the video infrastructure.”

“Switching up to HDMI 2 (10-bit) – the relative jump from 256 RGB colour integers per channel at 8-bit, to 1024 at 10-bit is massive. That is transitioning from a potential 16.7 million colours to 1 Billion. That forced us to think it all through again. It’s not just new gx2c servers,  we have had to invest in completely new infrastructure, new matrices, new switches, new cable systems, everything. And, as we discovered, not all high-res LED screens could handle the hugely increased data flow.” The tour screen supplied by Video Design is 140m² of ROE CB5.

“It was Icarus who provided the momentum,” concluded Leinster. “He presented the idea to the band, their management and the band’s production manager, James Maillardet and pushed it through. We’ve worked with James before and know he has a very workmanlike approach; he won’t dismiss something out of hand just because it looks difficult. That doesn’t mean a blank cheque. Between James and the band’s management you have to say at some point they committed to an article of faith and we should all thank them for their support in bringing this to a-ha’s concert audiences. After working intensively with Icarus during the testing phase at our facility in Bedfordshire, we showed them the results and his vision was entirely vindicated. To see just one example, the Northern lights on screen in such detail and depth of colour without a hint of banding is breath-taking. It’s a new era and I expect a lot of creative people within the touring industry are going to be very excited by the possibilities this opens up.”