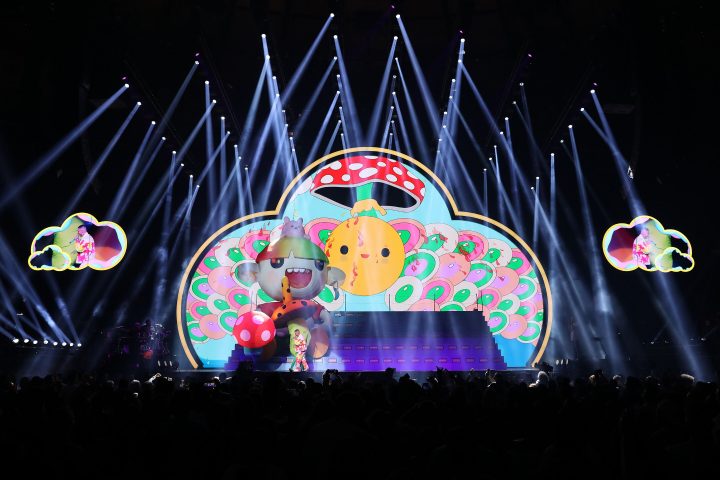 Nathan Paul Taylor, Production Designer with The Squared Division, devised the show’s concept; Andre Petrus of Clear All Visuals was the Associate Lighting Designer and Programmer.  “It was a very bright show – Nathan used every color in the book and every song was taken to 100 percent,” says Petrus.  The rainbow theme was apparent in graphical elements and color, and a cloud-shaped LED screen topped a stairway at center stage.  Cartoon-style characters appeared in animations displayed on the cloud and as dancers in costume. There were inflatable set pieces and characters, too: 18-foot inflatable Little J sat on the steps for the duration of the show.

Lighting played a major role as well, notes Petrus.  “The entire show was time coded; every song was accented with lighting – there were thousands of cues.  There are a lot of intricacies with reggaeton music, and every bit was accented with light.  We really pushed technology on this show to make things go as hard and fast as they could.”

Nathan Taylor mounted 68 Mythos 2 fixtures directly above the main stage with 16 more on the floor.  He positioned eight Scenius Unicos over the main stage and 16 above the B stage, a small, separate stage at FOH.

“The Mythos 2s were small, fast and punchy.  We used them to wash the stage and to create aerial and beam effects,” Petrus explains.  “I’ve used Mythos 2 for a while; they’re very versatile, and we used every single feature on the show.”

The fixtures were mounted in grid fashion in eight vertical fingers over the stage.  “We got really big looks out of them, including cool sweeps and effects,” says Petrus.

The Scenius Unicos over the main stage lit the performers and dancers throughout the show.  Those over the B stage illuminated six giant inflatable characters.

“We didn’t know how the inflatables would take light until we got on set – there were no opportunities for a test,” Petrus notes.  “The characters were made of a beach ball-type material, and the Unicos did great.

“All of the Claypaky fixtures performed well and held up just fine for the run of the tour,” he concludes.