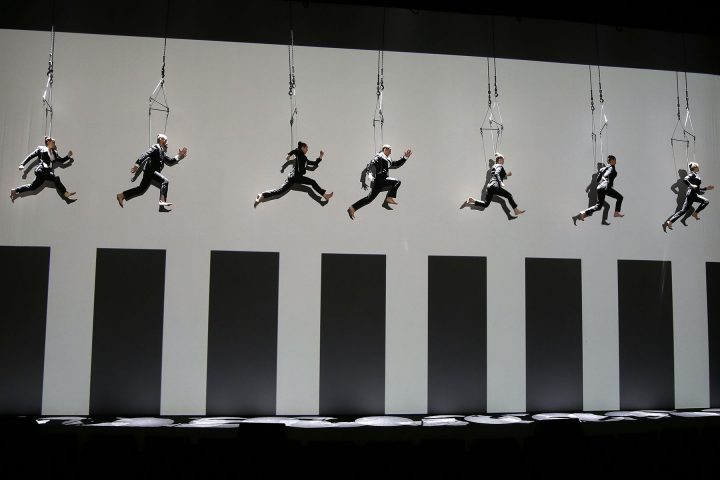 To light this space-defining masterpiece of mind-stimulating choreography, they chose 24 x Robe MegaPointes, which were installed, together with custom trusses, motors and a bespoke people flying system into the Great Cinema Hall at the Thermal Hotel in the Czech spa city.

Cabani is an innovative boundary-challenging dance and physical theatre group founded by the brothers whilst they were at college 25 years ago. Since then, they have been thrilling audiences worldwide with their unique blend of adrenaline-fuelled acrobatics and imaginative expression, working on a diversity of theatre, film, video and multimedia projects.

This year was the 24th time that Cabani has designed and produced the Opening and Closing Ceremony shows for KVIFF. While they keep coming up with multiple fresh performance ideas and concepts, the pressure is always on as audience expectations are now super-high that something visually outstanding will be revealed.

This year’s OC event was no exception!

They decided to create the vertical – and suspended – dance piece after being inspired by the graphics artwork for this Festival event, and the show was given the working title “Black & White”.

It involved eight aerialists – who were trained in Tomas Pinter’s AirGym Art Company for the event. They were attached to eight specially adapted harnesses, each flown on a Cyberhoist motor.

The piece ran to a special soundtrack comprising eight different versions of the song ‘Sweet Dreams’ which Cabani remixed for the show. 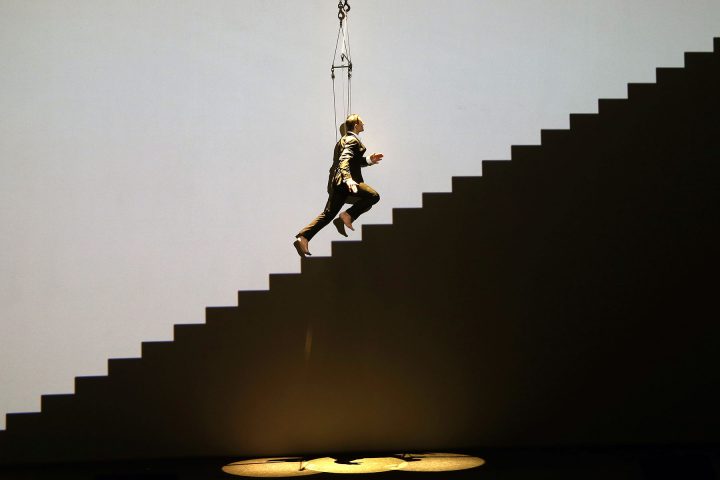 Cabani also created and edited the projected video content that provided distinctive backgrounds and textured and shaped light for the performance in conjunction with Studio Najbrt and XLAB, and they consulted closely throughout the process with Ladislav Horak, who is their long-term lighting designer.

In addition to all the lighting, AudioLight Service – one of the Czech Republic’s premium technical suppliers – also delivered sound, rigging and video equipment. The special projection screen flown upstage of the acrobats was supplied by décor company Stary & Stary.

All – the two Cabani’s and Ladislav – agreed that super accurate and very specific illumination was needed, and therefore chose 24 x MegaPointes for the task.

Cabani’s previous experience with vertical movement shows in the venue gave them additional confidence that the plan would work well, and they also knew from experience that every millimetre of the 14 metres of available headroom was needed and knew that the lighting for the performers would have to be very specific.

Each performer’s harness was attached to a Cyberhoist, with three MegaPointes assigned to each one.

Right from the initial sketches for the show they wanted three fixtures to surround each acrobat, always lighting the side and front, so the light needed to retain a tight collimated beam shape that looked so elegant and precise.

Most importantly, it was imperative that there was no light spillage onto the projection screen!

These desired tight beam angles tied in perfectly with what could be attained using the MegaPointe zoom feature, and these ultra-narrow angles were combined with the powerful concentration of luminosity emanating from the fixtures.

The lights were positioned on special trusses installed and tailored exactly to the Great Hall’s roof void which enabled them to be rigged right at the top of the ceiling, with 14 metres of airspace below! 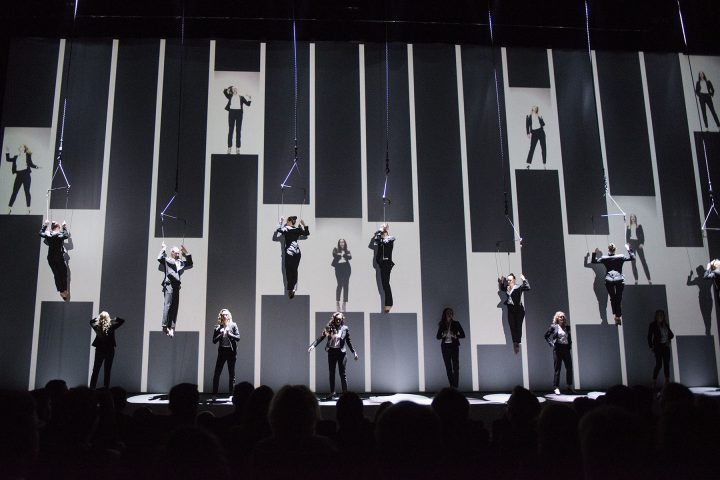 Cabani have used Robe’s standard Pointes in the same space for previous shows they have produced there, but this time they felt the quality and extra punch of the MegaPointe was spot on for the desired effect!

In charge of designing the trusses and rigging needed to get the motors, acrobat harnesses, and MegaPointes and motors in the right place was Petr Znamenacek from AudioLight.

LD Ladislav Horak has been involved with lighting different elements of KVIFF for some years as a freelancer, and he also works on music shows, tours and live events. He has been using Robe products regularly in his work for some time, especially recently.

He comments that the small size and light weight of the MegaPointes was also helpful in this situation, as the rigging detail was already very complex!

As a major part of the OC’s visual focus was on the automation and video projections, he used only the basic functions of the fixtures – dimmer, positioning, colour, zoom and focus – and ensured that the lighting looks were clean, dramatic and elegant while the projection-filled details and the movement added kinetic quirkiness and many surprises to the show.

Ladislav appreciated the MegaPointe’s “excellent” hot spot control and colour rendering and its relative quietness in this scenario. The main challenge with the tiny distance between the screen and the vertically moving artists was containing the lighting, and the shuttering on the fixtures enabled him to achieve that goal.

The lights created mood throughout the work and were also synchronised with the projection cues and looks.

He controlled the MegaPointes via a grandMA2 console.

The initial show programming took place at Audiolight’s studio facility where video operator Patrik Hlousek and motion control programmer Tomas Richter worked together with Cabani and Ladislav to perfect all the moves, looking at how they were lit and how this could be achieved safely, an intense part of the development process which took several days.

They also all worked hard putting everything in place and rehearsing for four days on-site.

Around 50 collaborators in total are working with Cabani to create this latest ground-breaking show. “Their positive attitude and trust enable us to realise technically and artistically ambitious shows like this in a really tight timeframe,” states Cabani. The longest-serving on the team include the multi-talented Vojtech Kopecky – cameraman, editor, video creator and consultant all in one; costume designer Simona Rybakova and production managers Jakub Svejda and Ilona Labutova.