The final 8-week series was recorded at the Mosaïek Teatro in Fairlands, Johannesburg, and aired on M-Net Channel 101. 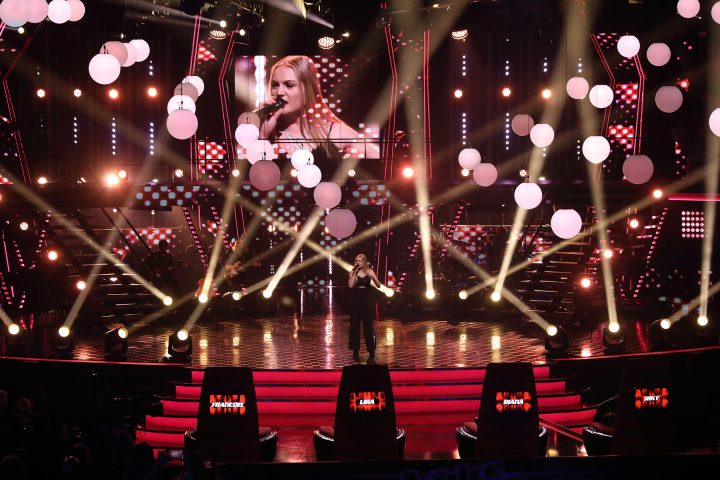 Josh worked closely with set designer Dewet Meyer, series director Darren Hayward and TV director Nadia White to carve out an ambience for the 2019 season which saw him programme – intensely – 12 songs a week for the 8-week period!

Lighting – together with sound and video equipment – was delivered by rental company Multi-Media with the set built by JDM Sets. All aspects of the technical production were co-ordinated and overseen for Multi-Media by production manager Chris De Lancey.

The performance environment was divided up with a selection of LED screen columns, LED battens and digital LED strips which enabled Josh to break down the set and isolate or merge different areas. The task was to produce the big ‘televisual’ feel that everyone expects from a show like The Voice, with more intricate details and individual treatments for each artist and song.

A major design challenge for this series was dealing with five PA stacks which were part of the L-Acoustics L-ISA multidimensional sound system, which was supplied by Multi-Media, a first on any Voice production worldwide. 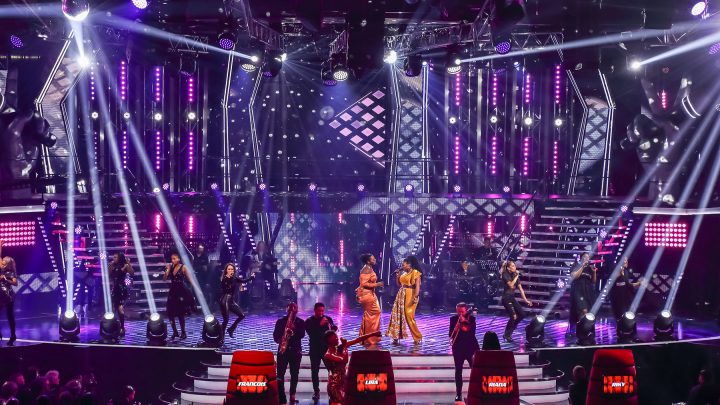 Some signature set and design elements from the first season – also hosted in the Mosaïek Teatro – were retained because they worked so well, while other angles were developed to bring fresh treatments specifically for this season.

Above the stage, Josh had five upstage-downstage orientated trussing fingers slightly raked … and each of these were positioned in between the five PA arrays.

The LEDBeam 1000s were the main colour ‘fillers’ across the stage. Josh likes the fact that they can produce an intense colour wash and also zoom into tight, powerful, super-strong beams when needed.

Pointes and LEDBeam 100s rigged along the fingers provided excellent beam-tastic looks and effects, and due to the orientation of the fingers, they had serious focusing scope and could reach all over the stage and right out across the audience.

Forty-eight LEDBeam 100s were used on four custom-built movable structures, which were wheeled on for four songs during the finale. Each structure had 12 x LRDBeam100’s on one side, and 2.9mm LED screen on the reverse, making them mobile and interchangeable between LED screen and lighting effects.

The venue also had a large ‘bulkhead’ area protruding into the stage, but Josh used this to his advantage, and it proved quite handy for accommodating some mid-level fixtures.

The LEDWash 600s were rigged on audience trusses above the large crowds – the venue was chosen for its large 3,000 capacity, such is the popularity of the series in SA. 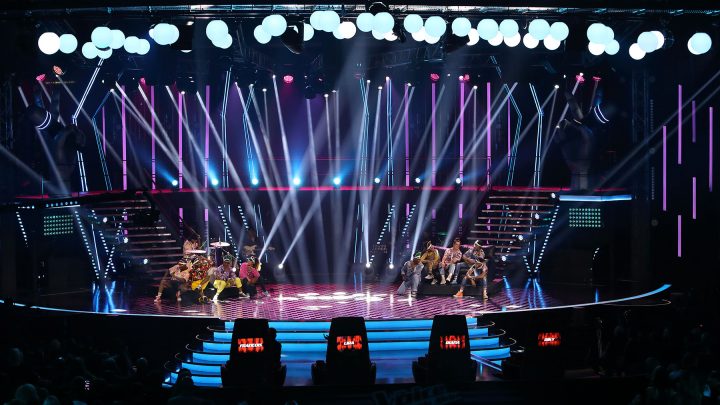 The miniPointes were mainly dotted around and concealed in the set for eye-candy and additional texturing.

For the final, an additional 16 MegaPointes were brought in and positioned on the floor, in an upstage line to widen the enlarge the space. “They have a great zoom, the CMY colour mixing is awesome and an infinite amount of variations can be produced when it comes to effects … and that’s what we need given the intensity of the schedule and the amount of songs we light each week.”

Josh was assisted by his associate Andre Siebrits, and they programmed and ran the Robes and other lights on a grandMA3 console.

Josh draws some parallels between working on a ‘semi-residential’ production and a training institution. “You are constantly driven to try and test new ideas and features, different ways to programme the lights and find things to experiment with. You start pushing more boundaries because there is this time AND the persistent pressure to keep making it different each time,” he elucidated.

Thursdays and Fridays were dedicated to programming the songs in the venue, which is where the whole creative team suggested and tested ideas. Saturday was a full day of camera dress rehearsals, so again Joshua and Andre could spend time fine-tuning lighting for camera looks.

On Sundays, rehearsals were followed by the live show.