John Featherstone of lighting and visual design practice Lightswitch worked as part of the XD Agency team to help create a stunning high-impact environmental design for Cisco Live! 2019. Featuring a series of light-based artworks, this project was conceived to catch the eye and quicken the pulse of delegates entering the main presentation space at San Diego Convention Center. 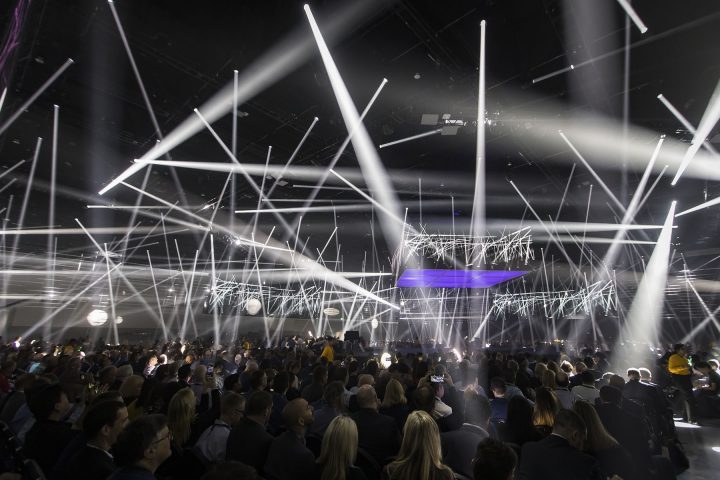 The massive four-day event welcomed more than 25,000 Cisco ‘power users’ from around the world who came to learn about the latest products, services and ideas, to network and be entertained.

The central ‘general session’ space was located across two halls of the Convention Center’s extensive floorspace, configured to seat around 16,000 people with the presentation stage in a center, in-the-round style.

The lighting and visual effects proposed by John for the project were inspired by Cisco’s commitment to thinking outside of the box and often taking bold and audacious steps in the development and pursuit of innovation in the fast-moving world of technology.

“With a forward-thinking client and a tech-embracing audience, this gives us the opportunity and the inspiration to think about different approaches every year,” explained John, who has lit the event – in different locations – for the previous two years.

Filling a space with 16,000 people takes time – about an hour in fact. So, this year John and XDA Senior Creative Director Julie Schneider hit on the notion of making that essential walk-in period – traditionally considered downtime – a curated and dramatic part of the show.

John and Julie wanted to ramp up the excitement and build a sense of anticipation and drama for what was to come during the presentation sessions.

“It needed to be something cool, something that all these top Cisco users could relate to and appreciate, and naturally, spectacular and gripping,” explained John.

The headroom available in the convention center was relatively low and whichever way you look at it, the venue is essentially a concrete box. To accommodate this challenge, the XDAgency team hit on the idea of wrapping the space in a vibrant and dynamic interactive art installation that brought atmosphere and excitement into the space. 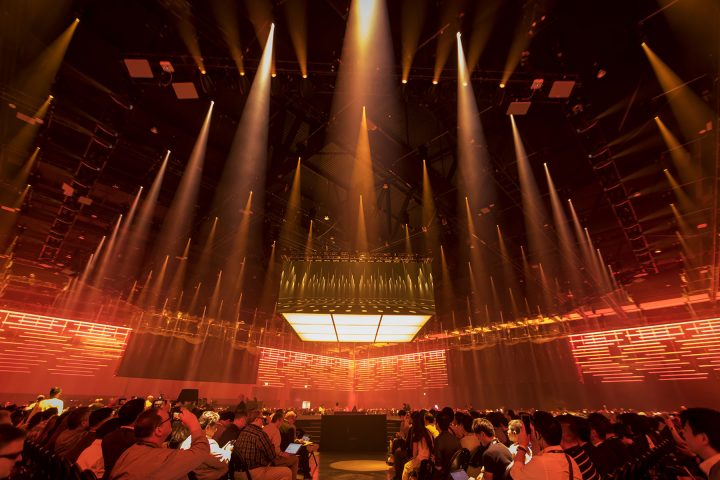 Integral to achieving the effect were two visual elements. The first was a series of light art works that were created with white PVC pipes – a box that defined the pace and was christened ‘Momentum’ by Schneider. These were lit with LED strips on all sides, creating a dynamic piece fusing scenery with art installation.

The second element was an intense grid of lighting fixtures which created a structure of beams filling the space with light, color and texture when activated. This light geometry – including concentric circles, boxes and other fractal shapes – was created with most of the Pointes and MegaPointes spaced out evenly on a 10’ x 10’ grid over a 160’ x 160’ space.

The fixtures not used on the inner grid were positioned on four trusses physically framing it (the grid) in the air, and these could reach out to the periphery seats. Taken together, the combination of kinetic movement across the ‘Momentum’ sculpture and the Pointe and Mega Pointe beams from overhead represented the notion of networking, data flow and exchange – functions that are at the heart of Cisco’s enormous global enterprise and related to nearly all of its products and work in some shape or form.

In addition to those 380 Robes, John – who is a big user and specifier of Robe products – picked 24 x Spiider LED wash beams to internally light a large cube structure flown above the main presentation stage.

This had screen material stretched across on the bottom making it into a giant soft box light effect from above, which thanks to the Spiiders, produced a delicate, beautifully balanced and highly versatile light source for illuminating those onstage. The four external sides of the box were clad with LED video panels for additional dynamics and content delivery.

On the opening day, the pre-programmed lighting ‘performances’ were tightly cued to five pieces of instrumental music, featuring everyone from Hans Zimmer to Dave Grohl. The Foo Fighters were also the event’s official entertainment, playing nearby Petco Park as part of the guest experience.

On the second day, it had a superheroes and sci-fi movie score theme. The experiences featured added custom video and were chosen to be popular with a tech-savvy Cisco audience. The music was curated by audio designer Dino Ruggerio, and the video content created by Matthew Hemming from Very Good Studios.

The interstitial pieces ran between 2 and 7 minutes long, and spread out over the walk-in hour, succeeded in energizing the audience and creating excitement for what was to follow. “It was all about presenting the attendees with something unexpected,” commented John.

John loved the fact that the Pointes and MegaPointes complement one another so perfectly and matched so well in quality of light. “We all love that Robe family commonality,” he stated, adding that it brought a real depth to the production and created amazing geometry in the air above the audience using both types of fixtures. 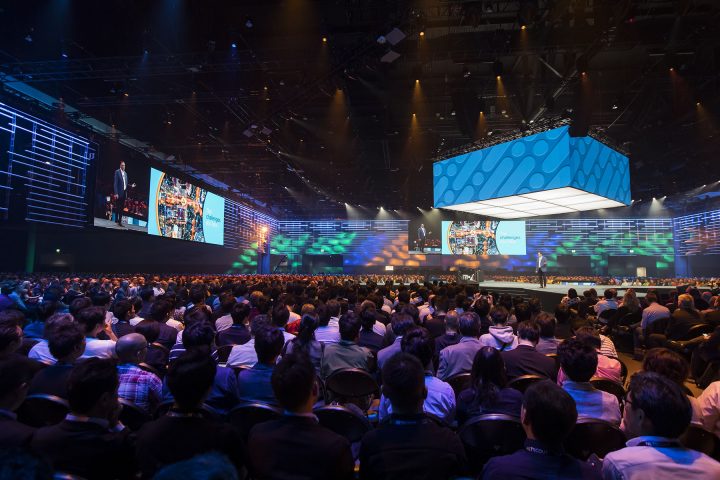 The challenges of the project included sourcing this many Pointes and MegaPointes at the height of the summer touring and festival season, a task handled efficiently by lighting supplier Donny LoDico from Phoenix-based Video West.

Lacey Taylor was the Lightswitch production electrician on site. The show’s co-executive producers were Marc Buchan and Julia Mitchell, the technical director was Joe Russo, and the video supplier was Fuse.

John values working for a client like Cisco who “are happy to embrace the notion of being brave and different in finding unusual and stimulating ways to enhance the guest experience,” and he and his crew enjoyed great synergy with the XD Agency group.