Indie singer/songwriter Mitski is one of today’s more original artists with an astonishing voice and captivating stage presence that has endeared her to a growing fan base. She followed up a successful 2018 tour with a 2019 spring outing that also saw the artist playing summer dates before wrapping up in September with two New York shows at Summer Stage in Central Park. 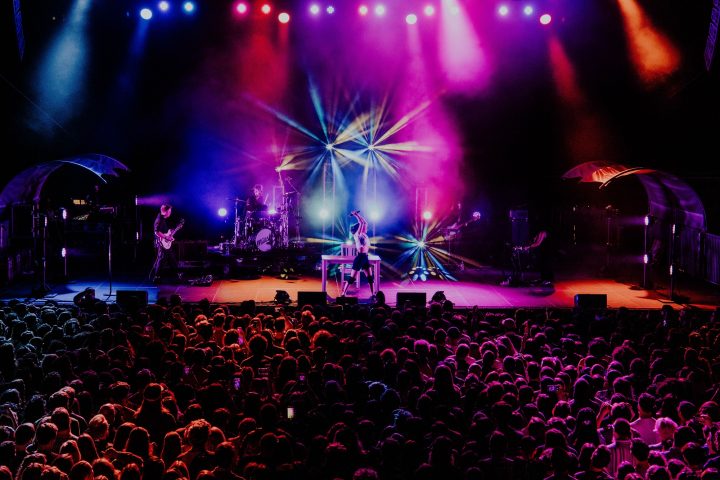 Lighting design for the “Be the Cowboy” tour was by John Foresman, who employed an Elation rig of Platinum HFX™ moving heads and SixPar 200™ color-changing PAR lights to complement the emotive singer’s lyrically rich songs. Lighting supply was by Pisgah AVL of North Carolina.

Mitski performs emotionally moving songs played along melodic lines that can vary in tempo with carefully choreographed movement an important part of the show. Foresman describes his design as dynamic with a lot of energy during the high points and still calmness during the moodier, quieter points of the set. The design, he says, was focused around the choreography and making Mitski and her movements the center of the show.

The lighting designer says that color played an especially important role in the shows. “The colors I used vary based on the mood and feel of each individual song, often changing colors as the songs change in tone. For songs that keep a similar tone throughout, I typically opt to keep the color palette static. I find that knowing when to change colors, or when to remove color entirely from the look, is critical to capturing the tone the artist is trying to convey in their music.”

Much of that color came from SixPar 200 LED PAR lights with 6-color LED chip that gives an expanded palette of colors. The designer used them for side light onto Mitski and the band with additional SixPars positioned downstage on the floor as uplight for Mitski and her choreography. Foresman says he is a fan of using monochromatic/analogous colors together instead of creating looks with many different colors. “Using colors that are similar to each other makes the stage look much bigger and makes the look appear much more cohesive,” he said. When he does use different colors together, it is rarely more than two although he says it depends on the dynamics and feel of the songs. “If the song is calling for some crazy color-changing rainbow strobe, then that’s what it’s going to get!” 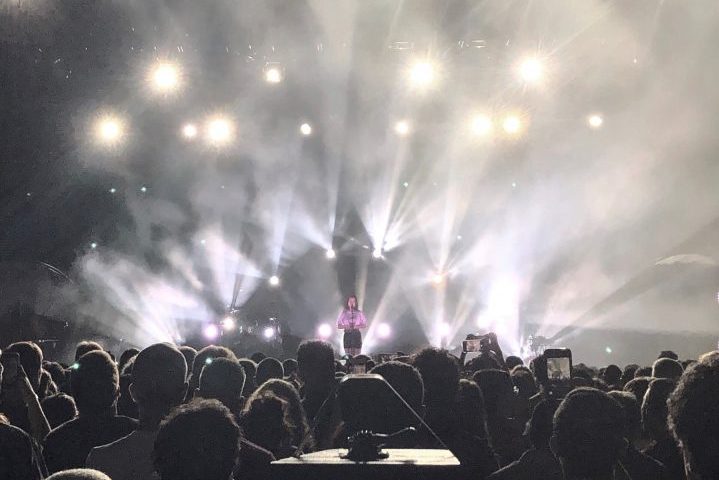 For highly dynamic looks, Foresman turned to the hybrid Platinum HFX that can operate as a spot, beam, or wash light. “Whether they were used with fast-rotating prisms or as unmoving beams in a fixed position, they were key to creating unique looks from song to song,” he said. “For the price, they are super bright, and their prisms look amazing. On numerous occasions on tour, I had house lighting techs mention how great they thought these fixtures looked.”

The Platinum HFX worked from truss towers in an arch-shape with the designer adding more fixtures on the floor at the base of the towers for Mitski’s final two shows at Summer Stage Central Park. “I used the beam mode the most because it creates the most crisp and focused gobos and prisms, which I use often,” he stated. “However, if I needed the fixture to operate as more of a spot or wash fixture, it was always great to be able to switch to the corresponding mode. I find hybrid fixtures to be a great idea for any production, but I think that they are especially beneficial for acts that may not have huge budgets or be able to afford a bunch of different styles of lights.”

The HFX/SixPar fixture combination allowed the designer to create a variety of complementary looks. Foresman shares a favorite from Mitski’s “Two Slow Dancers” encore. “Mitski comes out for an encore every night to perform this beautiful ballad, and after a high-energy show filled with tons of flashing, moving, strobing, and colorful lights, I chose to make the look for this song completely still and colorless. Mitski begins the song in near-darkness, just her and her keyboardist, until the swelling of synth strings comes in. With the synth, I fade in the arch of Platinum HFX as a colorless, motionless prism surrounding her until the synth (and HFX fixtures) fade out and the next verse begins. I repeat this same cue for the final chorus, only this time I very slowly pull out the front and back light on Mitski and don’t fade the HFX out with the synth, which makes it appear as though she is disappearing into the darkness while the prismed beams hang in the air over a silent, sniffling crowd. The programming for the song is super simple, maybe 6 or 7 cues total, but it’s always such a beautiful moment of every show, and the Platinum HFX’s prisms are really what make the look stand out.”

Pisgah AVL provided the lighting fixtures and support for the tour, a reliable vendor that Foresman was pleased to work with. “Working with Pisgah AVL has been amazing,” he says. “Their prices are super competitive, and their service and dedication is second to none. I seriously can’t say enough good things about these guys. Shoutout to Dave Champagne and Robert Shaffer! These guys are a huge reason why these productions have been such a success!”