Ravello’s Villa Rufolo, located on the splendid Amalfi coast, will once again be brought to life thanks to an exciting installation by Laser Entertainment. From 14th September to 13th October, Villa Rufolo will play host to the fourth edition of this integrated project, one that consists of lighting, video mapping and 3D projection. Guests will be greeted by an animated ghost of Lorenzo Rufolo who, as any good host would, provides visitors with an insight into over 1000 years of the villa’s history.

Villa Rufolo is a historic dwelling, a true pearl of the Amalfi coast, with a history spanning over one thousand years. This is a history that deserves to be carefully told to the many visitors who visit every year from all over the world. 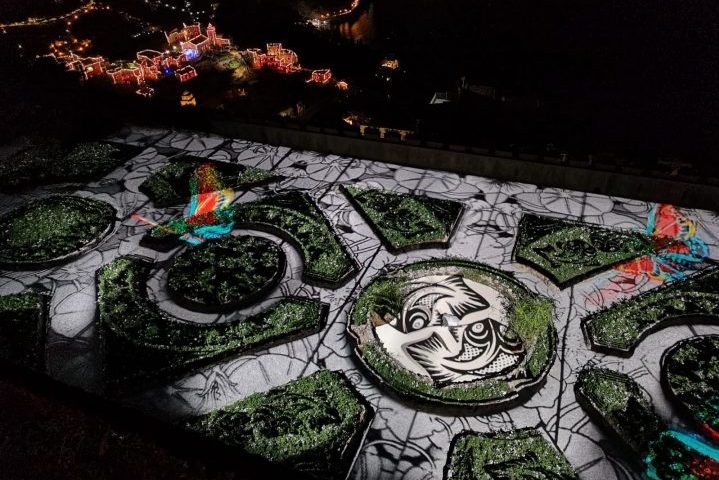 Many famous people have passed through the villa, from Wagner to Reid; Boccaccio to Escher. Thanks to the stories of the “ghost” of Lorenzo Rufolo, guests are guided through a magical multimedia installation, discovering Villa Rufolo’s vibrant history.

This fourth edition of the event follows a major restoration project, which has seen the Torre Maggiore and the south façades restored. A renewed installation was staged, once again undertaken by Laser Entertainment in Milan. Laser Entertainment took care of the entire production – from design to installation, including the creation of original video content.

“This year, following the recent renovations of the southern facades of the Villa, we have designed and devised a new framework and updated the various previous chapters, with an installation even richer in technical quality and even more evocative than its predecessors,” says Alberto from Laser Entertainment. 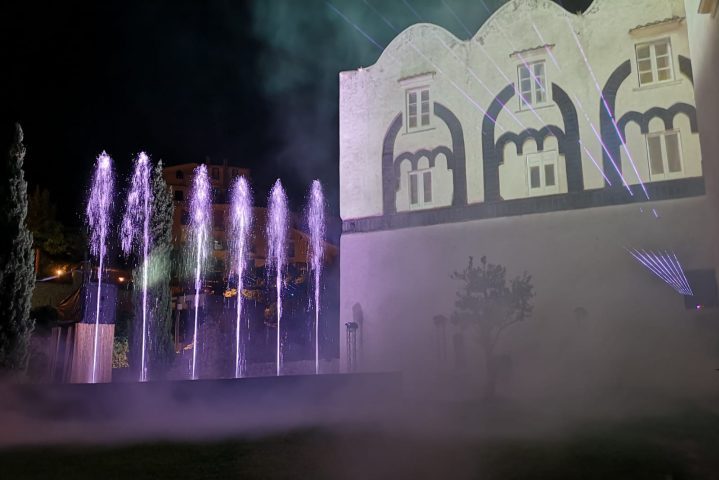 “This is a rather complex project that involves 3D video mapping, holo3d, lasers, lights, illuminated fountains and special effects – all synchronised by timecode in order to tell the history of the Villa and enhance its marvelous architecture” adds Alberto.

Inside and outside the location, specially created “paintings” have been projected, containing content created by the Laser Entertainment team. These images are projected with different transparency gradients, in order to create a stunning hologram effect. This effect forms the creation of landlord Lorenzo Rufolo, who accompanies visitors during their trip.

For the technical management of content, a Dataton WATCHOUT system has been provided, which distributes SMPTE time code to an MA Lighting console for lighting control, alongside a Pangolin Beyond Ultimate system dedicated to laser effects. The show also includes water fountains, which synchronise with the rest of the show. 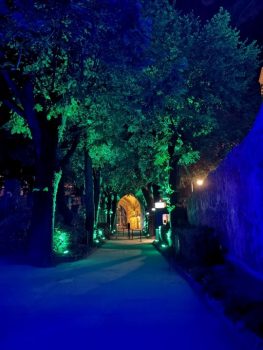 The choice of fixtures used for the projection was of paramount importance, with the required projectors needing to be capable of both powerful output and accurate color reproduction. Proven reliability was also essential, given that the installation will be active for at least a month, not to mention subsequent extensions – until 3rd November if weather permits.

“We used Christie J 3DLP series projectors with 20,000 ansi lumens, NEC 1DLPs with 8000 and 5000 ansi lumens and the BENQ 1DLP with 6000 ansi lumens. These are top-quality machines with guaranteed reliability.”

To make the story available to all visitors, many of them from overseas, a new audio guide system by Sennheiser was utilised, which guaranteed high audio quality in all areas of the location.

“As a landlord, I am proud to have hosted you” Lorenzo Rulfo informs guests, as his hologram personally thanks his visitors at the end of a fantastic journey.