After a few years of uncertainty and seemingly scaled-back participation, it seems that PLASA is on its way back up. The move from Excel back to Kensington’s London Olympia took place 3 years ago now, and this has certainly worked wonders for the show. It would arguably be foolish to suggest that the show could return to its “heyday” era, where it filled two relatively expansive halls of Earls Court exhibition centre, however the proposed move to Olympia’s larger hall for next year’s edition of the show is certainly a display of optimism from the event’s organisers.

The trend still remains that many companies are sticking to the decision to display their product lineups on the stands of their UK distributors, rather than hosting their own stands. Although one element of this is a pure cost-cutting exercise, it also potentially suggests a change of focus for the show, with aims of attracting a more specific audience with whom meaningful and ultimately profitable conversations can occur. Of course, that’s not to say that the “wow” factor has been completely removed, so read on for our 2019 PLASA Highlights.

Robe were back in force for PLASA 2019, returning as a Platinum sponsor of the show – a clear indication of the company’s faith and trust in the importance of the show. Last year saw Robe present the first in a trilogy of live performances – a trilogy that continued at LDI 2018 and this year’s Prolight + Sound in Frankfurt. This year, Robe chose PLASA again to present the first in their new trilogy of shows, entitled “Return to the Future“. Geeks, Nerds and Techies throughout the hall were visibly delighted as they were greeted by a futuristic set design, complete with DeLorean, that played host to Robe’s newest fixture – ESPRITE. 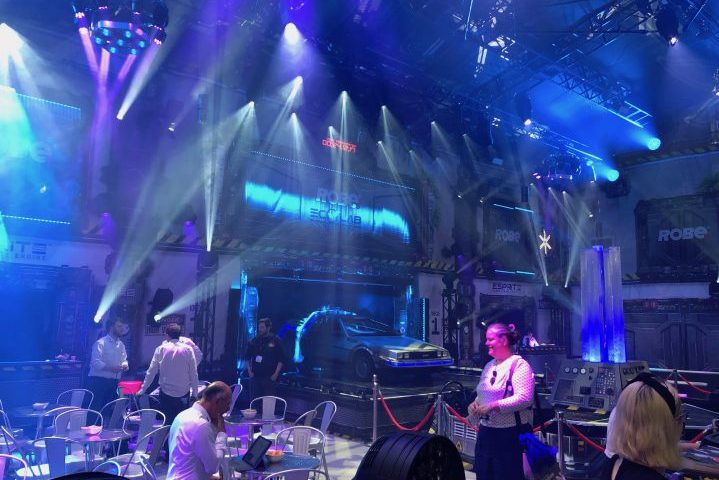 Esprite is the first fully replaceable LED engine luminaire of its kind – featuring a high-powered, eco-friendly, cost-effective replacement for ‘workhorse’ discharge fixtures. With this, Robe aims to provide a direct replacement for often expensive to repair and outdated rental workhorses. Thanks to a powerful LED light source and a highly efficient optical system, the fixture is capable of outputting 27,000 Lumens, whilst a 5.5 – 50° zoom range provides a high-quality flat-field beam, combined with smooth CMY colour mixing, extremely fast bumping colour wheels and a unique coloured prism for producing a new level of effects and animations.

Elation partnered with Entedi for this year’s PLASA Show, taking the opportunity to showcase their new 50,000-lumen Proteus Maximus. An all-purpose Beam/Profile/Wash, Protoeus Maximus is promoted as being one of the most powerful LED profile fixtures available on the market. Utilising a combination of a custom designed 950W LED and 180mm front lens, Maximus offers ultimate power and flexibility thanks additionally to its IP65 protection rating. 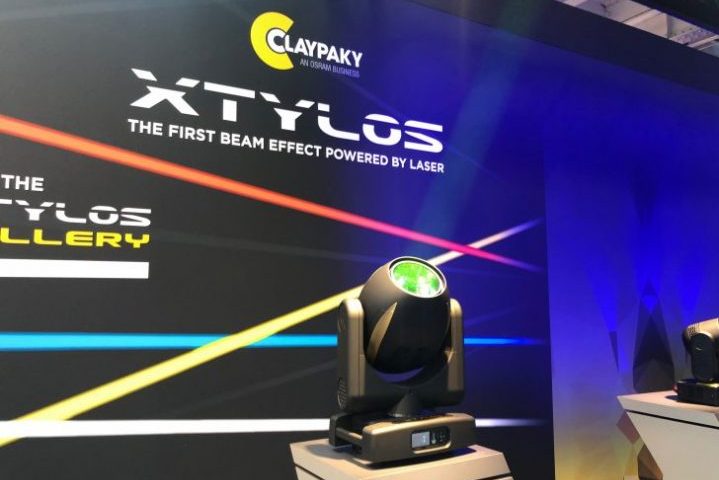 The fixture’s laser source, which is rated to last 10,000 hours hours of usage, is enclosed in a reliable, safe and fully sealed module. The laser-based beam enables the output to be steered in the range of 1°-7°, which can be decreased further to an ultra-sharp 0.5°. With 7 rotating gobos and 12 fixed gobos (including 7 beam diameter reducers) – a wheel with 3 prisms, and a sixteen facet prism on a dedicated channel which can be overlapped with the prism wheel, there are a multitude of creative possibilities opened to lighting designers.

ETC and High End Systems used PLASA 2019 to showcase a range of new products, several of which were highly acclaimed by the show’s Innovation Awards.

From HES we have TurboRay, a moving head fixture that utilises radial diffusers to give it a classic, retro look. Designed to offer expanded versatility, TurboRay can be used as a punchy narrow-angle wash light or as a powerful hard edge beam, capable of producing both aerial effects and complex textures. With its radial diffuser open, TurboRay’s ‘wash diffusion’ homogenizes and softens the light – allowing you to choose between a homogenized face or more radical effects.

The latest addition to the SolaWash Series, SolaWash 1000, was also showcased at the show. This ultra-bright wash light features framing and High CRI, designed to give designers a wide gamut of pure, even colours. Sharp edge focus performs throughout the entire 12° – 55° zoom range, ensuring a range of theatrical uses. 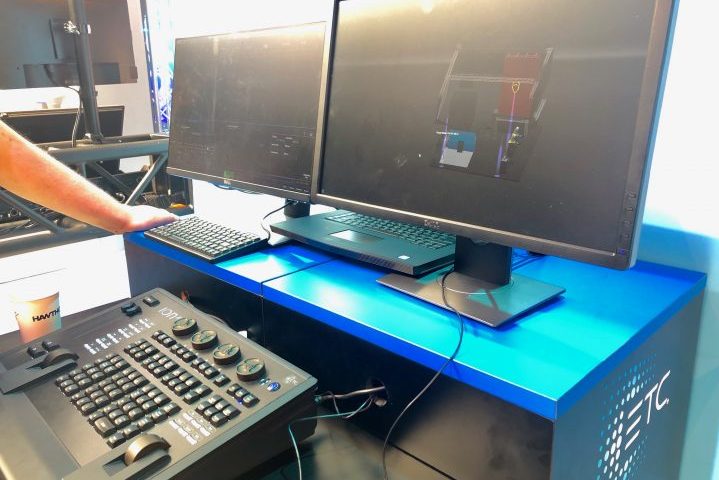 ETC showcased Augment3d, an integrated 3D programming environment which forms part of the company’s Eos v3.0 software. Augment3d gives designers the ability to view pre-visualizations of their shows, whilst live interaction and augmented reality are combined to allow users to work more effectively before and during production periods.

GLP used PLASA 2019 as an opportunity to showcase a number of products that were first presented at Prolight + Sound. This included additions to the company’s popular KNV series, with KNV Dot and KNV Line. The KNV Dot is a singular pixel source containing a super bright white LED, encircled by 16 RGBW LED’s with full colour mixing capability and a powerful output for a smaller point source. Likewise, KNV Line features 5 high powered RGBW pixels in a simple linear format and has the ability to join seamlessly with the KNV Cube and KNV Arc We also have the new FUSION range showcased, a series of IP65 rated fixtures, as well as FR10 Bar. FR10 Bar uses a larger size output aperture, as used in the impression FR1, giving a new look from a familiar style. impression FR10 Bar contains 10 x 60 Watt RGBW LEDs, each of which colour match with the entire GLP X4 and FR series of fixtures. Smooth, full range colour mixing is available, giving birth to a strong punchy output from a homogenized Fresnel lens.

DTS’s ALCHEMY 5 sat pride of place at DTS’s booth at PLASA Show 2019 – a high performance LED wash moving head with high luminosity and quality of light. Accurate color rendering for both white and colour output is achieved thanks to DTS’ HQS (High Quality Spectrum) trademark, which gives the ability to generate high quality whites, as well as an extensive palette of colours. ALCHEMY 5 has also been designed with theatre and television needs in mind. The fixture is able to operate extremely quietly, whilst providing versatility and high quality light across a 10 to 47 degree zoom range.

Although d&b audio did not have their own stand at PLASA 2019, they did use their UK distribution network as a platform to showcase their newly release A-Series. The A-Series of augmented array loudspeakers combine variable splay angles and acoustic optimisation in a compact format. The series has been designed with flexibility and versatility in mind, for uses where a range of coverage requirements may be necessary. The series currently consists of AL60/ALi60 and AL90/ALi90 models, with arrays of two to four loudspeakers possible, which can be hung horizontally or vertically to cover areas from 50 to 150 degrees. Midrange directivity control provides acoustic optimization directly from d&b amplifiers, using fewer amplifier channels than ArrayProcessing.

FBT’s Horizon was front and forefront at their booth at PLASA 2019. Developed to meet the increasingly diverse needs of rental companies and systems integrators, the HORIZON VHA (Vertical Horizontal Array), provides optimal audience coverage with the ability to adapt to the requirements of the project at hand. 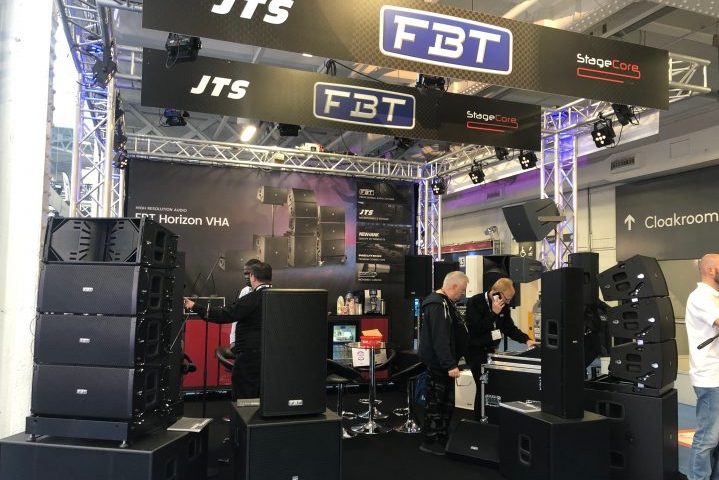 The HORIZON VHA series comprises the full range VHA406A, plus two options for low-end extension in the shape of the 12” VHA112SA and 18” VHA118SA. The purpose-designed central waveguides, optimized with BEM finite element simulations, offers dispersion of 90° horizontal and 20° vertical. The VHA406A’s Class-D, switch mode amplifier module is constructed in die-cast aluminum with natural convection to deliver 600W for the LF section and 300W for the HF.

As every year, PLASA Innovation Awards were presented to those products deemed to add significant development or contribution to the industry. The awards are chosen by a panel of independent and impartial industry experts, and the winners for this year’s categories were announced on Monday 16th September. And the winners are…

SSE for The Azimuth

This year’s Plasa Innovation GOLD AWARD was awarded to Artistic licence for sunDial quad. sunDial quad dmx 1k is a DMX/RDM controlled mains dimmer. Using trailing edge technology, the product provides smooth results with dimmable replacement LED, CFL or incandescent sources, with exceptional performance even at very low intensities. The product is rated at 250W per channel or 500W per pair of channels. The award’s judges praised the product for solving “innumerable dimming problems in one box with multiple programmable dimming curves being the icing on the cake”.