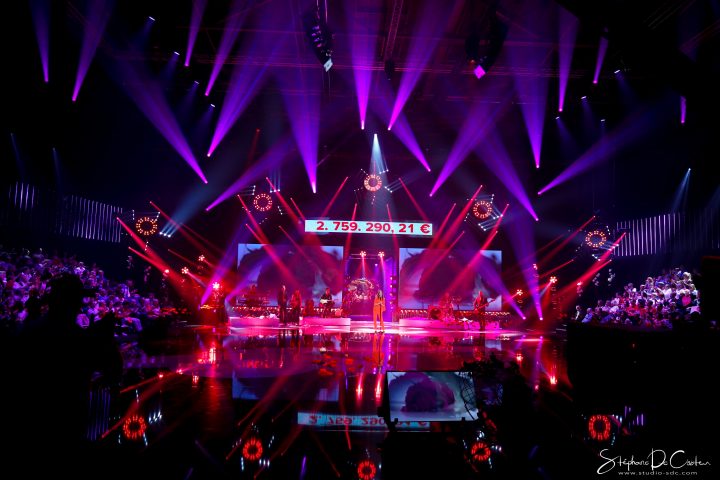 Produced by RTL-TVI, Télévie raises funds to help fight cancer and leukemia in adults and children, so the creation of vibrant, sumptuous television images which both enhance the on-stage entertainment and engage the audience to the full is a key requirement.

With its wide and deep studio stage hosting a broad range of live entertainment, the show makes serious demands on lighting. It requires lighting capable of filling the space with a quality of light, a variety of looks and effects, and the textural depth needed to create beautiful television pictures for various acts, over a long period.

“A television production has two challenges for lighting: the functional and the decorative,” said Dos Santos. “That is, what is technically good for the camera and what is pleasing and entertaining for the television audience.”

He added, “I was looking for luminaires that could produce a powerful, quality white light, that could open wide. I needed projectors, wash effects and bright beams to carve large volumes of space and give depth to the image.”

To achieve this, Dos Santos included 24 VL2600 Spot fixtures in his rig. “I chose them for their great openness and incredible focus, plus their gobos and their beautiful mixed and fixed colors,” he said. “The finesse of the optics and the variety of gobos, in particular the classic dotted gobo and the flower patterns, were what especially appealed to me effects-wise.

“The VL2600 is the masterpiece of the effects: it allows me to regulate the occupation of the space and to spatialize the show. They offer reliability and a unique signature of their own.”

As well as providing depth and texture, the VL2600 provides benefits for the camera, thanks to its light output and variable color temperature. “In television, we must always measure the levels and the white balance and the CRI,” said Dos Santos. “The VL2600 corresponds to what we expect, so we can very quickly calibrate it correctly with the other visual elements in the show.”