First arriving on the music scene in 1993 and going on to become the best-selling boy band of all time, The Backstreet Boys’ 2019 album, DNA, debuted at number one, more than two decades after the group formed. The five-piece are currently on theirDNA world tour, where FOH engineer, James McCullagh, and monitor engineer, Austin Schroeder, are using Solid State Logic (SSL) L550 consoles. 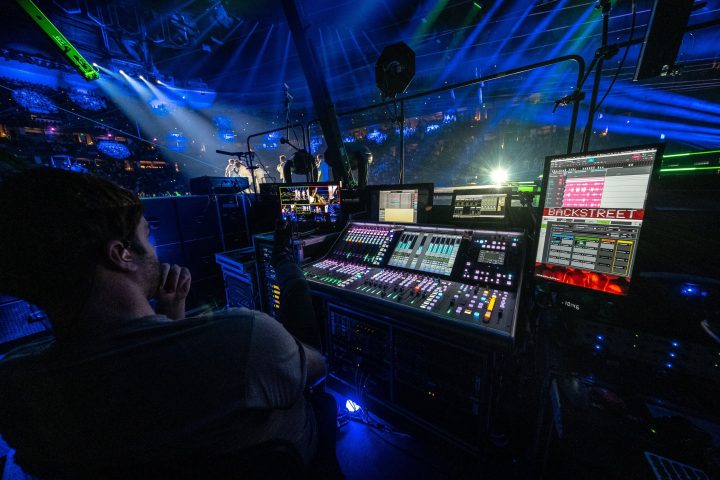 “A lot of bands are saying it’s their best tour ever,” smiles McCullagh. “They sold out the European and North American runs – they are very, very popular. When they got back together in 2013 they released a record under their own record label, and it did very well. They kind of stayed under the tabloid and mainstream media’s radar. The fans all knew about their comeback and they all supported it. When we started the Vegas residency though, it definitely caught the mainstream media’s attention!”

McCullagh has been following SSL closely for a while, and after gaining some valuable hands-on experience on a console, was always waiting for the right opportunity to use one in a live environment. Being from a recording background, McCullagh came to love ‘the quintessential SSL sound’, however wouldn’t use an SSL console in a live environment until he was able to convince the wider team following the Backstreet Boys’ residency.

“Especially in the pop world – or on any big tour for that matter – money plays a huge part in your decision,” he explains. “You have to have a strong case to convince the people around you that you need to make that change. So taking a risk or a gamble is difficult. But when our Vegas residency was coming to a close, we realised that there really wasn’t that much of a risk. It was a new tour, with a new crew – all the music was going to be re-done, everything was going to start from scratch essentially.”

According to Schroeder, using the new consoles made it easy to create ‘a live band in the box’ for the tour: “We chose to have our music director record the entire show in a studio, and receive all the audio files raw and unprocessed,” he says. “We then take these 120+ tracks and buss them down to 64 channels at 96kHz that get sent to the consoles via MADI from our playback operator. This gives us ultimate creative freedom on the mix, and the vibe of the finished product.”

McCullagh adds that the console’s ability to emulate the studio sound in a live environment played a massive part too. “SSL have done an amazing job at recreating the legendary sound of their famed studio consoles. This makes life much easier because you don’t have to use all these extra pieces of gear to try and emulate a certain sound, it already sounds fantastic! They try to get it as close as they can, and it makes life much easier. There is so much less to go wrong because you don’t have all these additions by trying to simulate a certain sound. The SSL Fusion (all-analogue 2U stereo outboard processor unit) is also designed for mixing in the box, providing that analogue sound. It has that little bit of extra mastering help to try and make it sound a little bit more like it was mixed on a console rather than in the box, and it certainly does that. All the little nuances add up to something quite large.”

For FOH duties, McCullagh was enthused with the overall console workflow and layout – even the tactile feel of the faders, buttons and knobs impressed. “I love that functionality and I love mixing on it – it’s a pleasure!” he enthuses. “I also really like that there are three solo busses as opposed to the usual AFL / PFL solo choice on most consoles. Each solo bus has its own mini matrix or input routing section where you can easily route just about anything you want to it. So what I like in my situation is, I am running a set of nearfield monitors from one of the solo busses, and headphones from another. The headphones are set up to listen to everything pre-fader, and the nearfields I have set up to listen to my main mix in two ways: I have the mix to the main stereo bus pre, or before it hits my outboard chain on the 2-bus, and then also after or post the outboard chain. The reason for this is so that I can actually hear what kind of a difference the outboard gear is making, but also make sure that the mix internally can also stand up on its own. This is all very easy to do and quick to switch between sources with the touch of a button.”

Ultimately, the team has been really happy with how supportive the SSL sales and technical support team have been during the whole process.

“We were nervous about moving our very complicated show from another console manufacturer to a brand new console and I/O that we didn’t have much experience on before for this tour,” admits Schroeder. “SSL went above and beyond on making us feel comfortable with learning the consoles and feeling confident that it was the right decision for us to make. If we have any questions or concerns, even while out on the road, (which we often do) we can get on the phone 24/7 and get our problem resolved quickly and efficiently. This is something that is rare and very important to have in your back pocket. I believe that these days, having a team behind you that you can reach out to wherever you are on the planet and whatever time of day or night is the most important thing to have.”

With the tour and the equipment clearly a recipe for success, McCullagh anticipates that he and his SSL L550 will be on the DNA tour for a while yet:

“The tour is on-going, everyone is winning,” he nods. “The fans are happy and tickets are selling so fast. So many people want to come and see it. Crowds of fans flock to their hotels, people are crying – it’s middle aged women behaving like teenagers!”